Another nap time came along which meant another chance to get out and chuck/cast a ball about. It was much drier today which meant the potential for friction abrasion on the line. Still, after a bit of reading today I would be trying a slightly longer drop (roughly 7ft) and place the lead at roughly 60 – 90 degrees from the rod blanks. This allowed me to rotate my body a bit more creating what I thought was more momentum during the cast. Trying to remember to pull the bottom of the reel down and in on the release. I had also read on the WSF forum that I should twist the rod slightly to the left, which I was also trying to do. There’s more to casting than meets the eye it seems and reminded me why I love pole fishing.

On letting go of the cast the ball flew away, definitely further than the previous day. I would like to say it was up near 100 yards, but without proper markers this is pure guess work. Either way it felt better. What did happen however was that lined initially spewed off the spool and somehow burnt the inside of my wrist! Which flipping stung. Mental note – Next time, wear a jumper or wrist band. The line burn honestly looks worse than it is, and is right on my cuffline which means my work shirts will almost certainly catch it.

The longer drop seemed to be working, and I think I will mark this drop length on both rods so I know how long the drop should be every time. I manged several more casts, but started to notice me direction was off. I seemed to be releasing to early and casting more to my right. So will need to work on that. In the process of reeling in I felt the ball getting stuck. It was quite surreal to see a bend in the rod tip while winding in a ball across a field. After pulling it free I could make out a black dog racing towards the ball as fast as he could. Luckily I wound the ball in and decided to call it a day before he had caught it, but that may well have been a PB – “50lb Labrador on!”. 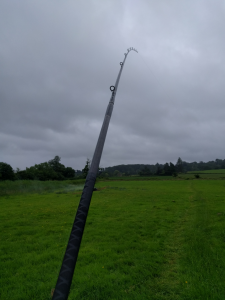 Will try and get out once before my next trip ad try with the faster Abu reels to see if that makes a difference.