How to guide – Using the Slider Float

After my recent trip to Shearwater I was contacted to explain how my set up. To be honest this was the first time I had fished the slider in a few years, so I was almost a case of re-teaching myself. The slider is a great method for float fishing deep venues on what could be described as almost normal waggler tactics. Unlike Polaris floats which work on a float/ledger principle, slider float fishing is essentially heavy duty waggler fishing. Once you have cracked it, it is a great method and viable alternative to fishing deep on the pole or short range bomb/feeder work. There are also a few hints and tips which make the whole process of fishing using the slider a whole lot easier. 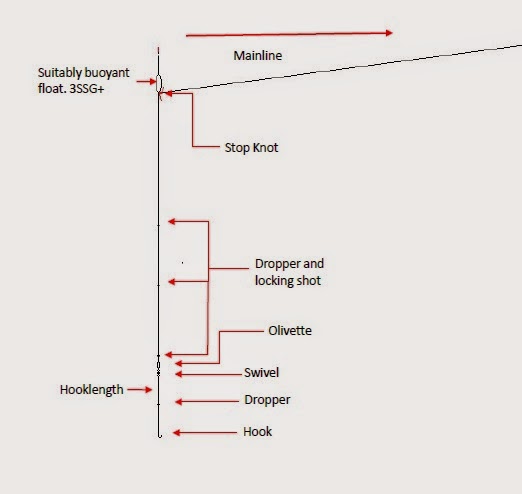 My set up for slider float fishing is as follows:

I personally find that the longer rod allows quicker contact with the fish while striking, it also makes casting easier. It is unlikely that’ll will cast as far with a slider as you would using a normal waggler, the additional rod length assists with the cast.

Reel choice is important. You will need something that balances well with the longer rod. For that reason I opted for the 4000 model, it casts well and retrieves really smoothly, with minimal fuss and great line lay.
You will need a line which will handle heavy floats being chucked out all day, can contend with a stop knot being tied onto it, while remaining durable and smooth. Maxima line is a line that has stood the test of time and is still the first choice of many anglers. I chose Chameleon for slider float fishing because when fishing at depths of over 15 feet red is the first colour to disappear from the visual spectrum (maybe it doesn’t matter, but I’ve only ever used Chameleon for my slider work)
The float, is a case of “horse for courses”. I was using a modified pre-cock 3AAA+ 5AAA and it worked well, but I have used much heavier when fishing up to 30 feet. Shearwater was around 19 feet, and the fish are known to take on the drop so there was no need to have a huge weight dragging my bait to the bottom as soon as it hit the water.
The Rig and Plumbing up.

Plumbing up is very similar to that of normally plumbing up on the waggler. Attach a plummet to your hook and cast out, but instead of moving the float further up or down the line you reposition to stop knot. Moving it either further up or down the mainline until you achieve the depth you wish to fish at. When fishing in depths of over 8 feet i tend ot fish slightly over depth as there may be underwater current movement which would lift a perfectly static bait up off the bottom.

Tips to make Slider fishing easier:
There you have it. Fishing the slider is a great method and a really enjoyable alternative to ledgering on deep venues. For those anglers who prefer watching a float to that of a tip then this may be the option for you.
Why not give it a whirl? If you have any questions about the above please contact me here.
Share