After a few sessions of surface carp bashing, I was becoming increasingly aware that my tackle was aimed at the lighter end of the fishing spectrum, and if (or when) I was lucky enough to catch that “lump”, my tackle might let me down. It was time for me to start looking for a better quality rod, one with enough stopping power to deal with double figure carp, but flexible and adaptable enough to use on a river/commercial venue. Time to scour eBay for a bargain, and a bargain is what I found. I bought myself a Chub Outkast twin tip Barbel rod. 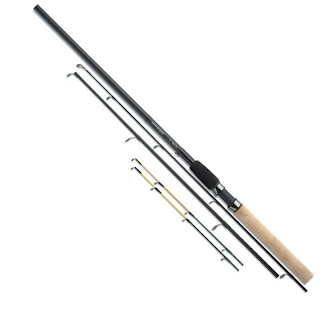 The current weather of non-stop blazing sunshine meant the river was definitely not going to produce anything special, so how was I going to put this rod through its paces? Fortunately my nearest venue (Riverside) never disappoints, so I packed the car with my new rod, a bag of dog biscuits and a few bits of tackle and off I went to trial my new purchase.
This 2 piece rod comes in at 12 feet long with twin tips. The one is a standard Avon style with a T.C of 1.75lb the other is a quiver tip with 2 interchangeable tips of 2 and 5 ounces (large gap between the two tips, but I can’t see myself ever using the 5 ounce). Today I would be using the Avon tip, as the lake I was fishing does hold quite a few double figure fish, but could I catch one? As with most Chub tackle the quality of the Carbon used is very high, and using the rod in conjunction with my 4000 sized Shimano reel meant it felt very well balanced. The eyes of the rod are also worth noting, as the butt section has 2 footed eyes that are suitably positioned so that the rod could be used with a bite alarm (if you fancied heavier carp fishing); whereas the tip section features single legged eyes which eliminates any potential flat spots, which can appear on blanks. The reel seat was a standard fixed based/screw top and held my reel perfectly. The cork handle was also a pleasing thickness given the size of the blank, which made holding the rod very comfortable. The length of the corked section was a bit shorter than I liked, but as my partner would say, I do have long “monkey arms”. The length of the corked butt section also presented no problems in any other circumstances whilst using the rod.

Although I wouldn’t be using a heavy casting weight (I would be using a Middy preloaded 9 gram pellet waggler with 3 foot 7lb fluorocarbon hooklength), the rod with it’s slightly whippy action (surprising given the 1.75tc) presented no problems in casting out the float the best part of 25 meters (just short of the island). The fish didn’t disappoint and firing out dog biscuits soon whipped them up into a feeding frenzy and it wasn’t long before I connected with my first fish of the day. There was significant stopping power with this rod, but the flexibility in the tip section meant controlling the fish was incredibly easy. The first fish of around 6lbs had presented a challenge but now I wanted something bigger to really put it through its paces.

It wasn’t long before I connected with my second fish of the day, a smaller fish of over 4lb, which presented no problem in being hauled in. The Rod was handling brilliantly, and the 1.75 TC tip meant that although it was soft enough to establish a great hook hold on striking, it also allowed provided enough power to gently coerce the fish towards the net. Fishing dog biscuits off the surface meant the takes and strikes were ferocious, and although I wasn’t on the river fishing for Barbel, I was trying to get a bend in the blank as often as possible.
The few hours I spent on the bank meant that I finished the day catching 10 fish in total (Fish 1 – Paul 10, see earlier post) – The biggest of which was a beautiful 14lb common. Again the rod handled the fish well, but I think 14lbs may be towards the limit of what the rod can control. If the fish was a few pounds heavier, the fight may have gone differently. If I was targeting bigger fish (18/20lb) I would use standard carp equipment (2.5tc etc). But after a great scrap on my bargainous purchase, I heaved the fish into my landing net, to round off what was a incredibly productive day.

Here are two of the biggest fish of the day, apologise for the lopsided photos, although I have rotated them the upload seems to have decided it preferred them as they were… The top one being the largest at 14lbs. 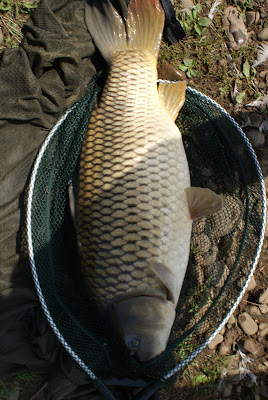 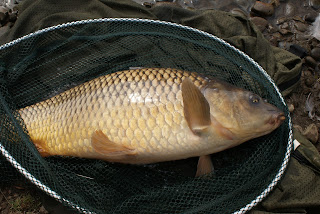 The Chub Outkast is a range that before purchasing I had only read about. I knew that the brand “Chub” had been a favourite of Carp and Specimen river anglers for years, and their entire range of equipment is generally made to a superb quality. That is something that I can now comfortably and happily attest. Retailing newat £139.99 I picked up this rod up at a ⅙ of the price, thanks to some careful bidding on eBay. It is a great rod and would recommend it to anyone who is looking for a rod which can cover a lot of options. Just look carefully any you may pick up a bargain like I did!
Share