As anglers, we’re always keen to hear about projects promoting our local waterways and working towards improving the health of these environments and the fish that live in them. After viewing some recent press coverage on the Healthy Rivers programme and visiting the following website (http://www.wefundthevalleys.com/opportunities/healthy-rivers-sirhowy), I have become increasingly interested in the work that the National Charity Groundwork is currently undertaking along the Sirhowy River. Local to the area, I decided to contact them to see if there was anything in the way of voluntary work I could do to help. I was invited to the local Groundwork’s offices in Blackwood to discuss the Healthy Rivers Campaign with project officer Hywel Abbott and also to talk about the on-going river clean up plans for the river Sirhowy.

For those unfamiliar with South Wales, the Sirhowy River source begins at Cefn Pyllau-duon above Tredegar. After flowing through Siôn-Sieffre’s Reservoir it continues south through Blackwood and Pontllanfraith. The river then stretches towards Cwmfelinfach joining the River Ebbw near Crosskeys.
Hywel explained that the Healthy Rivers program is a project run in conjunction with the South East Wales Rivers Trust and Environment Agency Wales/Natural Resource Wales. It aims to co-ordinate the removal or modification of barriers affecting fish migration, whilst encouraging the engagement of local communities. As such this multi-headed strategy is designed to promote the river locally, while assisting communities and local land owners to create a navigable river for the native migratory species that currently frequent the River Ebbw and previously the Sirhowy. Significant steps have already been made and now that the weir at Pontllanfraith has been altered to allow a migratory fish pass, Salmon have already been seen making their way up the river!
The River Sirhowy is a small waterway in comparison to some of the other Welsh waterways, and over recent years has been the subject of a substantial amount of abuse, whether from the general public, land owners or local companies dumping waste or altering its course. But things are changing, and for the better. The water quality of the Sirhowy has drastically improved in recent years, and with the continued efforts of the Groundwork team, along with Natural Resource Wales, things are only going to improve. The reintroduction of Salmon into the Sirhowy would provide a great indicator species, and if successful, would be a testament to the hard work which has been put into restoring one of South Wales’ neglected water ways.
The work that Groundwork has recently undertaken has been incredibly time consuming and by the looks of it, incredibly heavy! The Charity has successfully removed several abandoned cars from the river bed along the Sirhowy valley, along with the usual rubbish that unfortunately finds into way into rivers running through populated areas. Hywel also explained that the Charity relies on the help of volunteers to assist with their plans. Although they have some longer serving volunteers, I was surprised that more people in the local area haven’t looked up the Charity and offered to help – Particularly those who have a vested interest in the River itself. 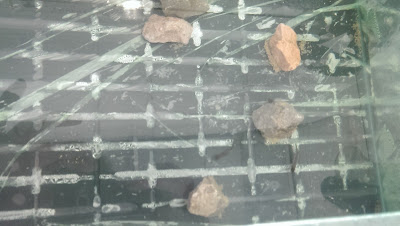 I was then taken to see the remaining salmon fry which were yet to be released. I was informed that the majority of their salmon stock had already been introduced and that these little guys would be released with the assistance of one of the local schools. The inner angler in me then started asking questions about the introduction of other fish species (mainly coarse) and whether that was a viable option for the future? For the time being Salmon are the main focus, because of their circuitous life bringing them back to the area following migration, they are a living litmus test for the viability and water quality of the river system.
Hywel informed me that the Groundwork team would soon be visiting a local site along the Sirhowy, to try to improve the water way by removing a man-made bank structure and trialling some water calming methods with the use of deflectors. This would provide a great opportunity to witness the hard work that Groundwork consistently delivers; it would also give me a chance to see how much the Sirhowy has changed from the murky stream I remember from years ago.
If you are based in South Wales and are interested in volunteering to help Groundwork with the Healthy River program please click here.
Share