After recently meeting with and receiving an invite from Project Officer Hywel Abbott from the charity Groundwork Caerphilly, I was keen to get to the site along the Sirhowy river to see the work that was being carried out. The site visited was Fairoaks Farm in Argoed, and this virgin unfished section of River had me intrigued. The Groundwork team, along with the landowner were in the process of removing an enormous concrete wall that had previously been constructed along the riverbank and was originally intended to protect the nearby football field.

The field is now a grazing ground for horses, but because of the massive re-developments upstream, the river bed had risen by several feet turning the wall into a massive weir. Over time the river has spilled over the wall and eroded the original river bank, altering the water’s course. In times of floods the water has re-directed over the structure and into the fields. Not only were the banks consistently being eroded, but it was causing problems for migratory fish in the river – Especially as they are prone to running the river when there is excess water. Here I could see the Healthy Rivers Program in action, but removing this formidable obstacle was going to take some doing! 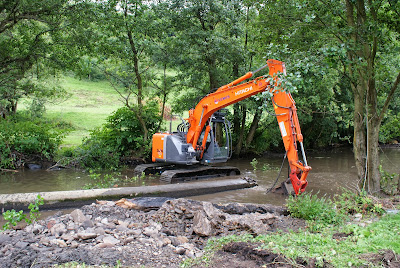 Arriving at the site and walking down to the river, it was not difficult to see why the Landowner wanted the wall removed. The bank had been stripped away from years of erosion. Today I found a large digger knocking chunks out of the wall. Upstream, Hywel and his team were busy cutting back fallen trees and ensuring that there were secure locations for the deflectors, which would hopefully further reduce bank erosion. 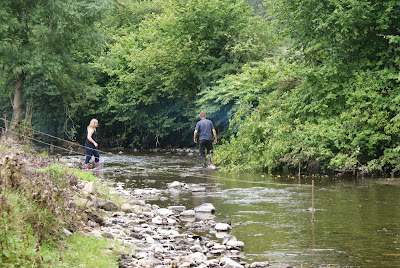 Looking at the river, I was amazed to see how clear it was. Frankly it looked positively fishy! I was also informed that the team had seen Kingfishers whizzing about that morning, which speaks volumes about the water quality. Fish were topping everywhere, making me wish I had a short fly rod to hand! The Groundwork team aimed to insert a series of “deflectors” into the banks of the river to gently alter the water course away from the eroded banks. This would be done with the aid of recently felled timber (from the site) and some rather large nuts and bolts which would fix everything securely to the river bed. 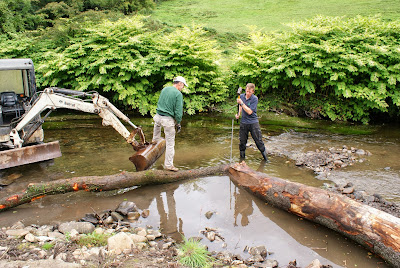 Before the ground started moving (quite literally), I spoke with the landowner who described his ideal scenario once these works were completed. It involved a fishing lake, so naturally I was all ears. The old playing field, which is now grazing land, would ideally be converted into a trout fishery – and only a trout fishery due to its proximity to the river. However, the landowner informed me that he had sadly encountered some problems with various official bodies, and things were temporarily on hold. The focus in this instance was purely on the river and improving the habitat in and around the river so that it could become a more passable river for the migratory fish. 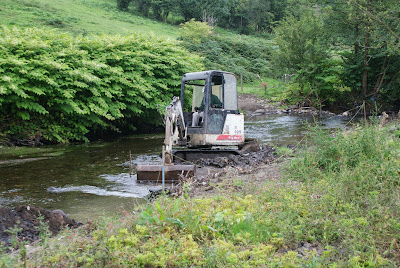 With that said the landowner hopped into his digger and was away. It was incredible to see the machine deftly moving and carefully positioning enormous logs and boulders with ease. Before long the first of 3 deflectors was taking shape, and the concrete wall was coming out in lumps (thanks to the considerably larger digger and a pneumatic jack hammer). Hywel and his team were also busy spraying the Japanese knotweed along the bank, to try and prevent it spreading further. I was informed that the field I was currently standing on had previously been covered by this invasive species, and only through the landowners (and his colleagues) hard work had it been cut back to its current levels. Clearly a lot of work had already been done! 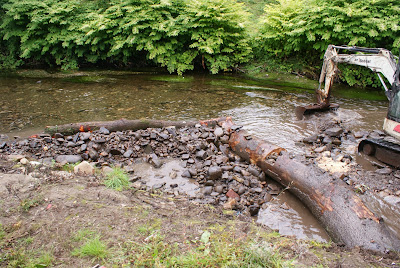 This site visit hammered home to me the amount of work that goes on behind the scenes, whether it involves Groundwork, the Environment Agency or any other charity which is involved in habitat rejuvenation. As an angler I was incredibly pleased to see these measures being taken by a team of individuals who aimed to improve the river’s quality so that people could enjoy it in years to come. I for one will be eager to assist the Groundworks team in the future and wouldn’t mind getting my hands dirty if it meant I could say I aided the re-introduction of Salmon into the Sirhowy River!
If you are interested in assisting with the Healthy River Program then please click here.
Share