I found out about this tackle store from the internet and when I arrived at Cross Green I would have walked past Angling & Countrysports had I not done a double take. There was half a second when I thought I was about to walk through someone’s front door. 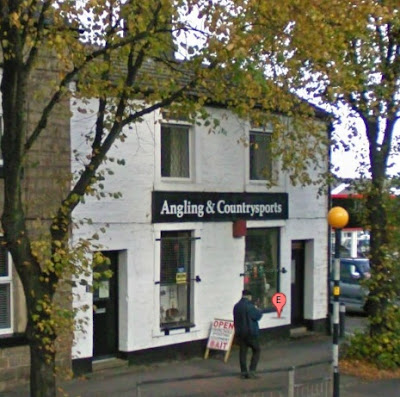 On entering it looked like an old and established fishing store. Walking in I could immediately see a fair selection of groundbaits on the right, with fishing rods and other equipment on the left. There was also a very helpful section on a small board which displayed adverts of a variety of fisheries in the county, from trout and fly fishing to river and match coarse fishing…

Walking further into the shop I could see it was crammed with fishing essentials including pole fishing bits, float fishing extras and feeder gear. There was also a small selection of fly fishing and specialist carp and pike gear. On the far back wall there was also some pellet/air gun equipment (if you’re into that kind of thing).

I spoke to the man behind the counter. He was a very cheerful chap, so I asked him for some advice about the nearby lakes and what to use. The conversation that followed was one which was filled with advice, on baits, pegs and local catch reports, from some of his regulars including “Paul the Paste”… (No prizes for guessing what bait he liked using). I asked for some maggots, and for a small shop they were in very good condition with large feed spots. The shop also sold a variety of flavoured sweetcorn, meats and worms.

It was a nice shop given the cramped conditions, and the gentleman who served me was very helpful. It is somewhere I would recommend as I had a feeling, given enough time, you could turn ups some gems of equipment and more likely some excellent advice.