For one reason or another I wasn’t able to make it out to the beach on Friday. To be honest when Friday night came around I was so knackered that by 9pm I thought I would have ended up falling asleep on the beach, or worse the wheel, so it was for the best that I didn’t go. Still I had the weekend ahead and with my parents visiting, I decided to nip out for a few hours with the old man on Sunday, and head down to West Bexington to see what was about. I’d seen a few catch reports and it wasn’t looking overly favourable. I also rang West Bay Angling to ask if anything was coming out and was issued the same generic advice as I have been for the past 4 years. “It’d have to be Abbo (Abbottsbury) or Bexi (West Bexington) mate”. Sounds about right, we shall see. 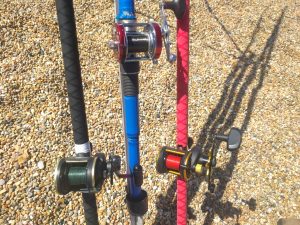 We arrived at the beach a good 3 hours before high tide and leaving the car we headed right, walking across the ever moving shingle about 300 meters until we had a enough clearance between us and the next angler, who was probably 40 meters down the beach. The wind was initially blowing northerly, so I was hoping for a few good casts to assist my confidence. I had the normal bait, plus hermit crab, so I was more positive despite the conditions – blazing sunshine. Chesil is a funny creature, it defy all logic and I’ve read plenty of catch reports saying that Rays come out in the day, as well as hounds and occasionally bass. I was hoping hermit crabs would really do the business. First cast, with the mags on full went out well, second cast – CRACK. One rig to the fishies. Third attempt went away well and before long a second rod was baited and lobbed short with a lump of bluey to see if anything was lurking in the gutter. My Dad would be following similar tactics but his baits were out significantly further than mine. Stupid pendulum casting… 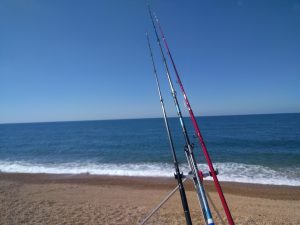 To cut a rather gruelling 3 hour tale down into a short few sentences… I think I may have had one bite on hermit crab. As I was winding in the pressure on the rod was more than the nothing that I ended up with, but about 10 yards from the shore whatever it was I had snagged/caught, freed itself and went on its way (Thinking about it, it may have been a crab). Aside from that we had nothing. Scratching for small fish or going for lumps at distance, everything from 30 yards to 180 yards was covered. Nothing. As high tide approached the topless multitude descended and began slinging tin foil into the sea chasing those ever elusive mackerel. I noticed a juvenile spider crab wash up, that may explain some of the missing bait on my lines, but the vast majority came back untouched. By the time we left, the wind had swung from northerly, to southerly, and any cast we made meant the lead just went up, rather than out!

It was just after high tide and there must have been at least 300+ people plus, bending beachcasters, carp and spinning rods, trying to search out a solitary mackerel. While I watched I saw nothing come out. Absolutely dire. I’m starting to think the Chesil although idyllic is a very difficult venue. 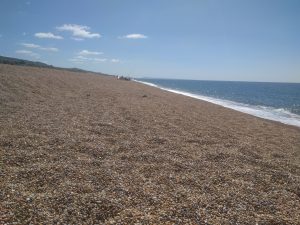 We were a fair distance from the Mackerel bashers, but there were hundreds next to the car park.

That’s that really, from a fishing perspective it was a real struggle. I think unless I have cast iron assurance fish are coming out, in future I will keep my sessions to the evening/night, and or choose better venues.

From a Casting perspective, it went reasonably well, there is a definite timing issue when using a ball to use a lead. You can feel and see the ball lazily slip away. A lead just disappears to what you think is the horizon… (Ambitious). But practice is definitely helping my range of motions and helping me bring my left hand in quicker. I still try and compensate for power with my right hand however, which resulted in the initially crack off, but after that first mishap, it all went relatively smoothly.

I managed to save (keep frozen) a box of squid, sandeel and some hermit crabs which means im almost ready for another trip with little to no notice! Ideal!