I have been slowly but surely fishing my way around West Yorkshire and after some recent “Tweeting” this time it was the turn of Highfields, a fishery which is tricky to find but worth it when you get there. With an afternoon spare I made my way to the Garforth AC venue and was curious about fishing it as the most recent write up was some years old. Being described as a good “mixed” fishery it was an encouraging and exciting prospect as more subtle tactics could be employed than on most carp ponds. 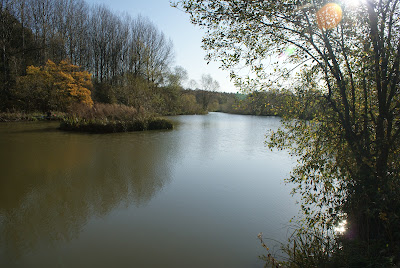 The majority of the lake is well established with an unusual square far end which was an addition to the water some years ago. A quick walk around showed that there were many pegs offering both open water and cover so that the majority of match fishing methods could be used. As the wind wasn’t putting up much of a fight I choose to fish the pole (on a recommendation) on peg 19. This choice was short lived and despite giving the sodden wooden peg the initial benefit of the doubt, standing on it with my box resulted in some dangerous cracking noises, so I quickly moved up the bank to peg 20, where I would be fishing to an overhanging bush opposite. 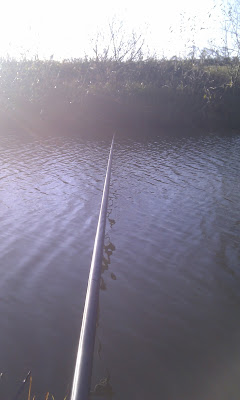 Setting up and beginning to plumb up against the opposite bank the lakes depth seemed varied between 4 and 5 ½ft. I ended up fishing on the bottom with my main swim, as well as up in the water, in the margins to my right. Using my favourite of double maggot on a size 18 and potting in 3 sizable balls of Sensas Lake 3000 I shipped out fishing tight to the opposite feature at 11.5 meters. Quickly the float disappeared and with 5 minutes I had 10 consecutive fish of roach and hybrids all weighing around a couple of ounces. Switching to a shallower line but fishing at the same distance using dead maggot brought out a bigger stamp of fish which were primarily Ide of around 8 – 10ozs.
There was an angler across from me who was catching steadily using the same tactics of fishing shallow and slowly feeding a trickle of maggots over the top of the float. Only having an afternoon meant I had to be more economical with my time and what I was fishing for, so after several nice Ide and a sizable Roach (which I lost at the net), I began fishing the margin swim that I had been feeding since the beginning of the session. Using a higher diameter line (0.13 Reflo Powerline) and a wider gape hook I hooked a small piece of chopped meat and shipped out to 6 meters. The bite was instant and I quickly brought to the net a small mirror carp of just over 1lb. I unhooked it and shipped back out in search of one of its friends, within 2 minutes I was bringing another Ide to the net. Apparently they would take meat as well as maggots!
Shipping back to my original swim and again using meat the wait was a little longer this time and when the float sailed under I brought to the bank a hard fighting mirror carp of just over 2lbs. It was then that a Highfields regular who had been walking around the lake began speaking to me and explained that the lake had recently been stocked with small carp (that I had been catching). He also said it was full of big hybrids and low double carp which are usually caught on the method feeder. With only an hour of daylight left I decided to stick with the pole and switched back to maggots continuing to catching the Ide on a shallow light float rig but would definitely consider using the method feeder on my next visit. 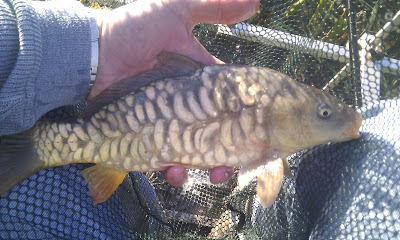 Highfields is a fishery which definitely deserves another trip, and provided me with an excellent afternoons sport. The payment of £5 in the honesty box at the beginning of the lane down to the lake adds to its charm and it is not hard to imagine why this lake is often fished as a match venue by Garforth AC. What was disappointing was the layout and general condition of some of the pegs. Some have sturdy and stable concrete slabs others having rotten and aged wooden stands held together with a few nails and also a bit of luck. Also, with no facilities to speak of a toilet break would be confined to the nearest tree. With a little bit of TLC and some maintenance this fishery could easily be one of those “little gems” which can provide any angler with a really enjoyable day out.
As a rating I would say;
Fishability *** ½ (Would have liked to have fished Peg 19 but the peg was unsafe to use)
Accessability *** (Took some finding on Google)
Value for Money ****
Share