After not wetting a line in over a year, the idea of going fishing to a new venue was an exciting one, but one which also made me feel a bit nervous. The dexterity and sensation of my hands is slowly returning, but nowhere near 100% so this ruled out Pole fishing (my favourite method). After ringing a local tackle store I was told Hendre Lake was fishing really well despite the heat, that it is very accessible and producing good bags of bream on the feeder. I can tie hooks and wind in, feeder fishing would have to do, and it may be a good way to break me back into fishing after a pro-longed dry spell.

Arriving at the lake there was a large tarmaced car park which made unloading the car and walking to the lake easy. There is also a fairly level path around the entirety of the lake, which made finding and choosing a peg very a simple one. These are now considerations which have to be taken into account when choosing a venue in my current condition. In my experience it is generally unwise to fish on the first peg closest to the car park, as it can often be over fished. Still, given my current mobility issues the first peg me and my father-in-law (Jeff) came across offered enough room for two anglers and a level enough banking for both of us to sit comfortably in our chosen positions to attack our quarry. I would be fishing the cage feeder on the quiver tip and a field testing new style inline method feeder by Mosquito Angling on the method rod, trying to target some of the bigger specimens that the lake held.

Despite the blazing sunshine I intended to fish maggots and worm over a bed of Sensas Lake 3000 and pellets to target the silver fish. I would also be using molasses soaked pellets with hair rigged 12mm and 8mm Halibut pellets and meat cylinders on the method to try and target the slabs (large bream) that the lake held. Setting up the cage feeder, my first cast in over a year was a tentative one falling well short of the island. Second attempt, much better. Rather than chance my luck any further, I went straight to the line clip, setting my distance for the day. I started using the standard tactics of maggots as first hook bait to catch fish, then chop and change to see what would bring the bigger fish in. Using double red maggots on the hook I cast out a conventional helicopter rig. By this time Jeff (using an inline maggot feeder set up) had already lost 2 silver fish at the net. Setting my rod down it wasn’t long before the tip of the rod was registering the first signs of a bite, and on striking I felt the kick of the fish attached to my line! The first fish of the day on the bank was a small roach of a few ounces. 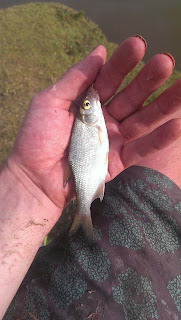 I am not a fan of the Helicopter rig set up. I’ve used it several times in the past and have always ended up getting tangled fairly quickly, sure enough on the second retrieve there was tangle. Wasting no time I quickly swapped the position of the feeder and hook length to make a more conventional semi fixed feeder pattern and re-cast. The rod showed a bite straight away… This was going to be a fun day!

I had read that Hendre lake was under ownership of the Cardiff Nomads, but now it is owned by the “Birch Syndicate”, who also own Peterstone Fishery. The bailiff explained how they have put a lot of money into the lake, but there was still some work to be done to make the banks even more accessible. After filling us in about the layout and depth of the lake he explained it was not uncommon for some of the double figure bream to take 20mm boilies! Not something I carry in my basic coarse fishing gear, but worth knowing for next time. He also pointed out that a number of big carp were all sitting under a big tree just up the bank if I fancied a hobble later on. I was happy to go at the silver fish and plodded on with my cage feeder. 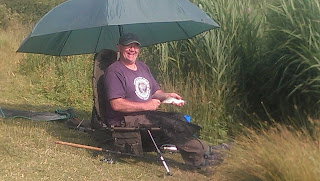 Red maggots seemed to have the pulling power, with little to no interest in a white maggot hookbait. Jeff was starting to catch fish at quite a rate and noticed that sweetcorn, although meant a longer wait between bites, did draw in the slightly bigger fish. I also set up the method rod, and after soaking the pellets I hair rigged on a 12mm Halibut Pellet and cast out, waiting for a “biggy”. 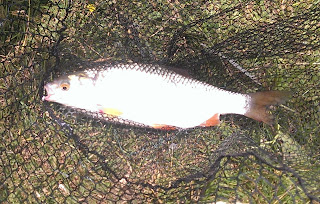 I recast my cage feeder, this time with a chopped worm hookbait and as I set the rod down, the bite alarm of my method rod began to register to the steady pluck of a bite. On striking I was very pleased to find a roach of well over 1lb had been gorging on the bait I had put out. When putting the fish back, my cage feeder whipped around and on reeling in after a surprisingly dogged fight I had caught… an eel! Only a little one, but it was big enough to make short work of my hook length. There was snot everywhere and on everything. I unhooked the slippery little bugger, but had to re-tie my hook length. This fishing malarkey can get quite messy (and smelly). The fish were coming in at a steady pace now and sticking with maggots meant bites were constant. Jeff was catching a steady stream of skimmers and roach and between my 2 rods I was catching roach, skimmers and a slightly better stamp of bream (up to 1½lb) on Halibut Pellets. As the afternoon wore on two young anglers had started targeting the carp on the surface and I watched one of them land a fish well into double figures. 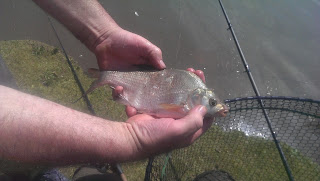 We both caught a number of fish and the Rudd started to feed in the late afternoon, again all falling to maggots. I had been warned that by fishing maggots all day we may get “bitted out”. A term which means pestered by little fish. But after such a long break from angling I was more than happy to bring in silver fish all day. It was good sport, and before we knew it was nearly half 5. I recast my method rod “one last time” with a meat and pellet combo. 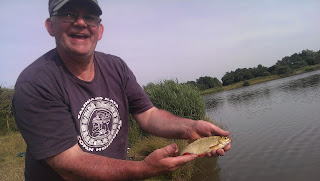 Within 5 minutes the alarm registered a huge bite the line tightened, on striking I felt a definite thump of something big, but that was it. Whatever took my bait had ejected it and spat the hook in the process. Damn it! Time for a second last cast… Same bait, same place, let’s see what happens. A short wait was all that was required when I had another terrific bite. This time it was a bream of around 2½lb. Not a huge fish by the lakes standards but it was a great way to round off what was a very enjoyable day. 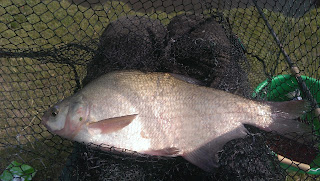 Hendre Park Lake is somewhere that I haven’t fished before but will definitely go back. I think I would have caught a lot more fish had I fished the pole or even the waggler, but feeder fishing was still a very enjoyable experience, and both Jeff and I were kept busy all day. With good parking and an easily accessible path around the lake, fishing this venue is something I would recommend to anyone in the area, as the lake offers very good sport in relative comfort. The lake also comes with a myriad of wildlife, including a lot of water birds and insect life that will keep you entertained if the fish aren’t biting. The only downside is there are no facilities (to my knowledge) and toilet breaks (if required) would have to be at the nearest tree or bush.

Accessability **** ½
Value for money *** ½  (£7, a bit steep considering the lack of facilities)
Disabled Access **** (Although there were no defined pegs or wooden stands to set up on, the banks were sufficiently flat enough not to cause much of an issue)