After my disaster of a fishing trip to Acorn fishery in Clevedon, my next trip had to be filled with fish to compensate. After a Google search and speaking to some friends I decided to try Mathern Mill. This hugely successful match fishery frequently produces 200lb bags of carp, and as I would be accompanied by one of my friends who was after a “lump” I thought this would be the perfect place to catch some good quality fish. Speaking to my local tackle dealer, he warned me that the main carp lake usually has matches on both weekend days (Saturday and Sunday) and fishing the same lake on Monday might prove tough. There was only one way to find out…

Arriving at the lake I was pleased to see we had the run of the venue, and was very happy to be able to drive around the lakes to a peg of our choosing. Both lakes were free and there were carp surfacing everywhere. I was truly astonished to see that many fish all milling around and surfacing. Hopefully this was going to be a good day. After an intense game of Paper, Scissors, Stone we would begin by fishing the match lake, and, if it was poor, move over to the mixed lake. Shortly after setting up, another angler who had recently arrived wandered over and re-iterated the warning about struggling to catch fish. “This lake gets hammered every weekend; you might struggle to catch after last weekends matches”. We thanked the angler and continued to set up our gear, the prospect of so many surfacing carp proved too much, and we were both determined to catch something (if only to prove people wrong). 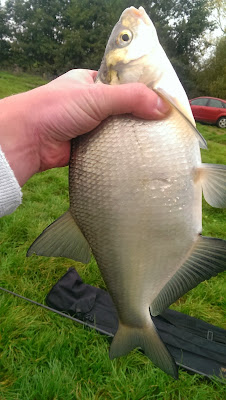 Today I would be alternating between fishing the pole and the method feeder. My peg had an open water and margin swim, and an island where I could cast my feeder. I had been told in advance to fish close in, and with the margin gulley to my right I set my rig to depth, banded on an 8mm Halibut pellet and began fishing at 4 meters. A few handfuls of pellets drew the fish in straight away and before long there were huge swirls coming from my swim. It was heart pounding stuff; carp easily into double figures were knocking my float out of the way to root around. Guy was soon into a fish, but after a couple of seconds fighting all he caught was a scale. Quickly re-baiting, he cast back out and before long was into a nice bream. I was determined to sit it out for a carp, and after switching pellet sizes and rig depth I still had nothing to show for almost 90 minutes of hard work. With that many fish in the lake, it shouldn’t have been this difficult.
I switched to meat and the bite was instant. The float tore away and the 16 elastic I was using was quickly bottomed out as the fish tore to the other side of the lake. Before I could add additional sections to the pole my hook pulled, leaving my rig a tangled mess to add insult to injury. Furious I swapped rigs, re-baited and shipped back out. Line bites were instant but again, true bites were very slow. In the mean time Guy had managed to land the world’s smallest carp, and a perch, leaving me trailing 3 – 0! Another hour went by an aside from a few tentative bites and 2 missed fish the fishing was sadly very slow. It was becoming clear that despite the number of fish in the lake, the weekends matches had left the fish both full and incredibly wary.
Part 2
Time for a quick re-group. We decided to move lakes in the hope of improving our chances. Choosing pegs on the far bank of the opposite lake, we set up our gear as quickly as we could and after 30 minutes (and some lunch) we were both fishing again. The move paid off instantly, as Guy struck into a nice carp of a few pounds. Shortly after, the heavens opened and my feeder rod whipped round, I was into a fish of well over 10lbs. Returning the fish to the water and re-casting I aimed to get as close to the island as possible.
Within 30 seconds the tip ripped round again and I was into a strange looking fish which I assumed was a hybrid Chub/Roach. As the island was within catapult distance I began firing pouchfuls of pellets into my swim.
The activity dramatically increased, and fish and bites were coming thick and fast. 5 nice carp came to my net in quick succession all ranging from 4 – 8lb’s. I also began feeding short range, and noticed carp were taking off the surface. Banding on a 6mm pellet I shipped out and started feeding over the top, within 2 minutes I was into a Carp. Despite its size it came in quite easily, and I was very happy to have caught another Common over 10lb.
The fish were feeding with fervour now and every cast or ship out resulted in a Carp. No wonder this fishery produced such heavy bags of carp. Fishing from 12.30 – 3pm I easily caught over 70lbs of fish, and in that time I had numerous fish related tangles and chopped and changed between methods. A seasoned match angler may have easily doubled my catch rate. The last fish I hooked was easily the biggest of the day and tore off so quickly that the ducks near the island took flight when the fish charged towards them. The hook pulled, and my floating sweetcorn (which I had taken to using instead of pellets) was never seen again. 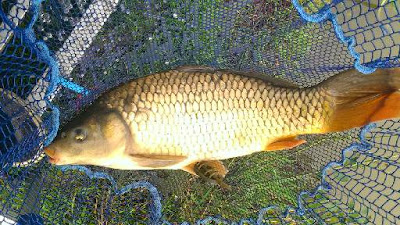 We decided to call it a day around quarter past 3. After receiving a soaking, we tried to prevent our selves getting another, and sure enough as we sat in the car the rain started pouring once again. Mathern Mill is a fantastic fishery, absolutely stuffed full of carp. I particularly like the lakes because I could drive around both of them. Having the car so close to the peg meant packing and unpacking was so much easier, and my trolley was barely needed. This venue would be great for disabled anglers as all the pegs are all well spaced, level and easily accessible. The easy fishing also means that good fun would be had by everyone! In the future I would heed the advice of locals. The match lake gets battered on the weekends, so if you plan on fishing Mathern the day after a match, fish the second lake for guaranteed sport and success. I hope to return to the venue shortly, and plan on fishing the match lake to see if I can get those fussy carp to feed. In the meantime I will content myself with the 70lb+ I had in the 2 and half hours that I fished the second lake.
As a rating I would say:
Fishability **** ½
Accessability **** ½ (Driving around the lake is easy, but finding the venue using SatNav isn’t! Stick to Google Maps for accurate directions for this venue)
Value for Money £7 ****
Disabled Access **** (You can drive around both lakes which is great, especially as the venue is quite flat. There is also a port-a-loo on site, but there are no other facilities, which is surprising given the frequency of matches on the venue)
Share