As the end of the river season is fast approaching I‘ve aimed my focus on many of the local rivers. To be honest I have a lot to choose from, and being a member of Ilminster Angling Association means the SLAC waters I can also visit have me spoilt for choice. This weekend I opted for the early approach and was up and out the door by 06:45. I aimed to cover a fair bit of water today and was intent on employing a lesson I had learnt from a previous session– “Be stricter with your time”. With that in mind I arrived at the venue and intended on fishing a static bait, while wobbling another – moving on every half an hour. A short walk down a muddy lane and I had arrived, I had set up and was casting my first line before the sun broke the horizon, now let’s see what’s about!

The outfits I would be using were;
2lb t.c Carp rod with a 5010 Baitrunner –  Fishing the static bait,
9ft 15g – 35g spinning rod with a 4000FD reel
Part 1
Assuming that there would be more than a few snags, and targeting Pike my mainline was 50lb braid, fitted with the obligatory wire trace. I was surprised how deep my static bait swim was, and after plumbing up I found the shelf towards the sluice gates at around 8 feet deep! The surrounding parts of the river were between 3 – 5 feet, so I would wobble baits through this section. After half an hour, losing several wobbled baits to snags and not so much as a bleep from my static I moved further down the stretch. After moving and repositioning the weather had decided to take a U turn. It went from being a cold, bright and frosty morning, to windy, freezing fog and very murky. Not ideal. Another silent 30 minutes past, so I dutifully upped sticks and repositioned on the adjacent drain, re-plumbing and starting over. 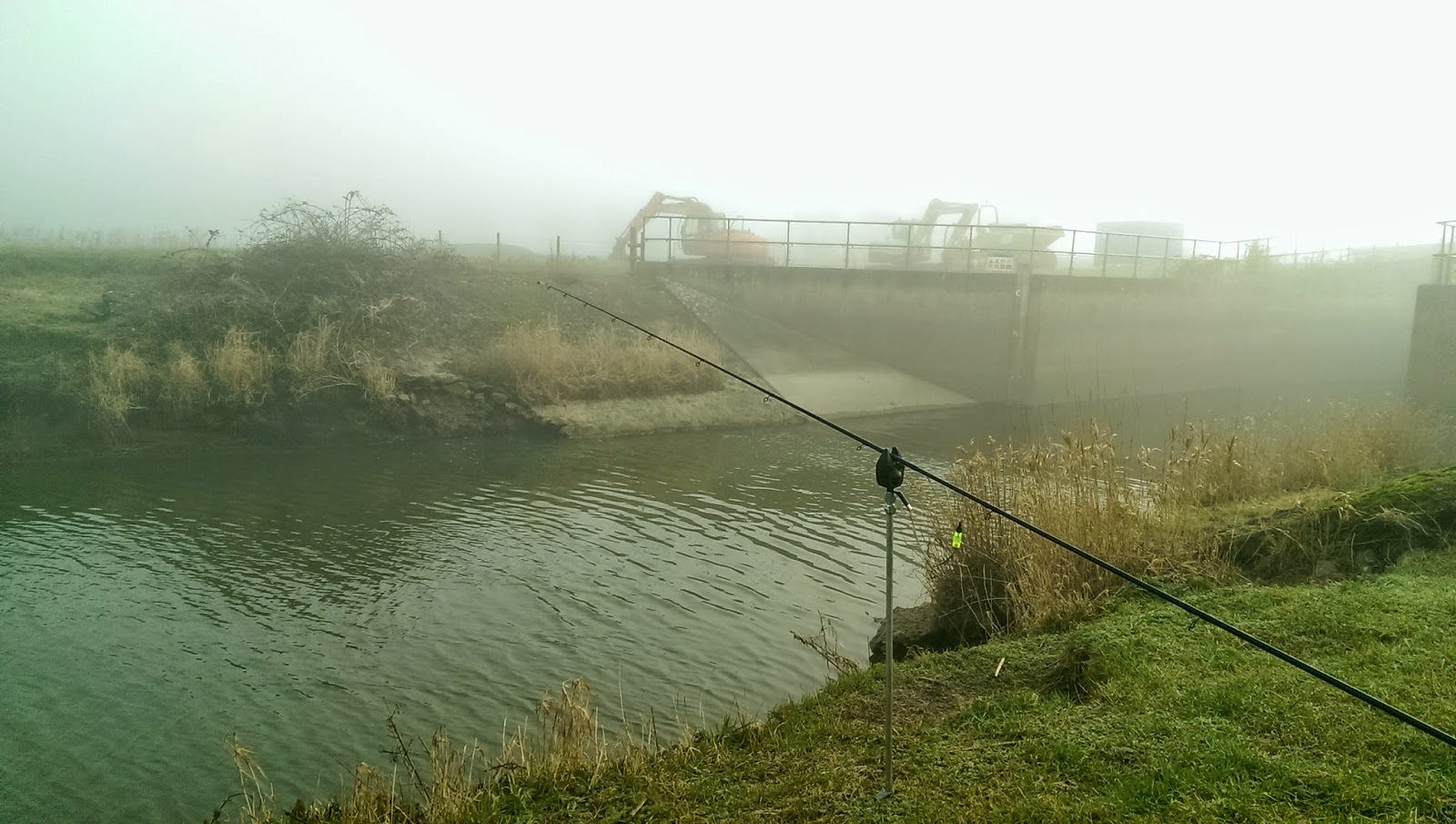 Slightly more confident as this was technically a “new venue” albeit part of the same water course. To cut a short story shorteranother fruitless 45 minutes past, and all I had to show for it was a cold, wet backside. To be honest I was a bit gutted, these 2 spots looked like absolute prime Pike territory, but maybe today they just didn’t fancy feeding. Time for a change!
It was a now a toss up now between the location I fished last time, where I landed my PB Perch, or another new venue. I decided to go with a new venue, and if unsuccessful at least I could say I gave it a go. A 20 minute drive and I was bank side. The great thing about Pike fishing is you pack light, so in minutes I was walking along side the river and chatting to a fellow angler who had set up, and was targeting Roach. I watched him for a little while, he said he’d been pestered by Ruffe, but was holding out for some better fish – I left him too it and went roaming.
Part 2
Walking up the stretch of river, I didn’t hold out much hope. The drain to my right was frozen solid. The skating swans were testament to that. The river was running low and clear and on80% of the stretch I could see the bottom, not great. 10 minutes later and several swims inspected, I found what I thought looked like a Pike holding spot – There was a bit of a wall and some dead reeds. I cast out the static bait and hooked up a Roach to wobble through the swim. Casting around the swim and varying my retrieve I felt a definite pluck of a bite and on striking the Roach had been slashed. It was still intact enough for a re-cast and with the help of some baiting elastic the Roach was flung back out, slowly being twitched back across the bottom. Winding the fish in I could see the bait was kinked and twitched at every retrieve. Thinking “that really does look like an injured fish“, I didn’t realise that the shadow behind the bait was a follow. It really didn’t look like anything aside from, well, a shadow a bit deeper down in the water column.
Twitching my bait up from the depths there was a flash, the fish emerged and wolfed down my dead bait. Without wanting to sound like an amateur dramatic, it was mesmerizing. Actually seeing the Pike follow, speed up, lunge and take the bait. The only thing I could compare the excitement to is surface fishing for Carp, but better! The take is more explosive, the fish more aggressive, the runs more frantic. Also using braid you can feel everything, it really adds something to the fight. As you could tell I was quite excited, my first River Pike. All day win!
Getting the fish on the bank I was acutely aware of actually how delicate these predators are. A long nose pliers or a forceps is a must, as (in my opinion) are barbless hooks. I used the pliers and quickly removed the hooks. Handling Pike can be nervy affair and potentially painful, but using the “chin method” and being very careful not to touch the gill rakers, the fishes mouth popped open and unhooking was very easy. I was over the moon and after a quick weigh (6 ¾lbs) lowered the fish back into the water giving it time to recover. A few seconds later and the fish slunk off back into the depths. A few more casts yielded nothing but my half an hour was well and truly up, so I moved off downstream by 50 yards. The static bait remained … static throughout. 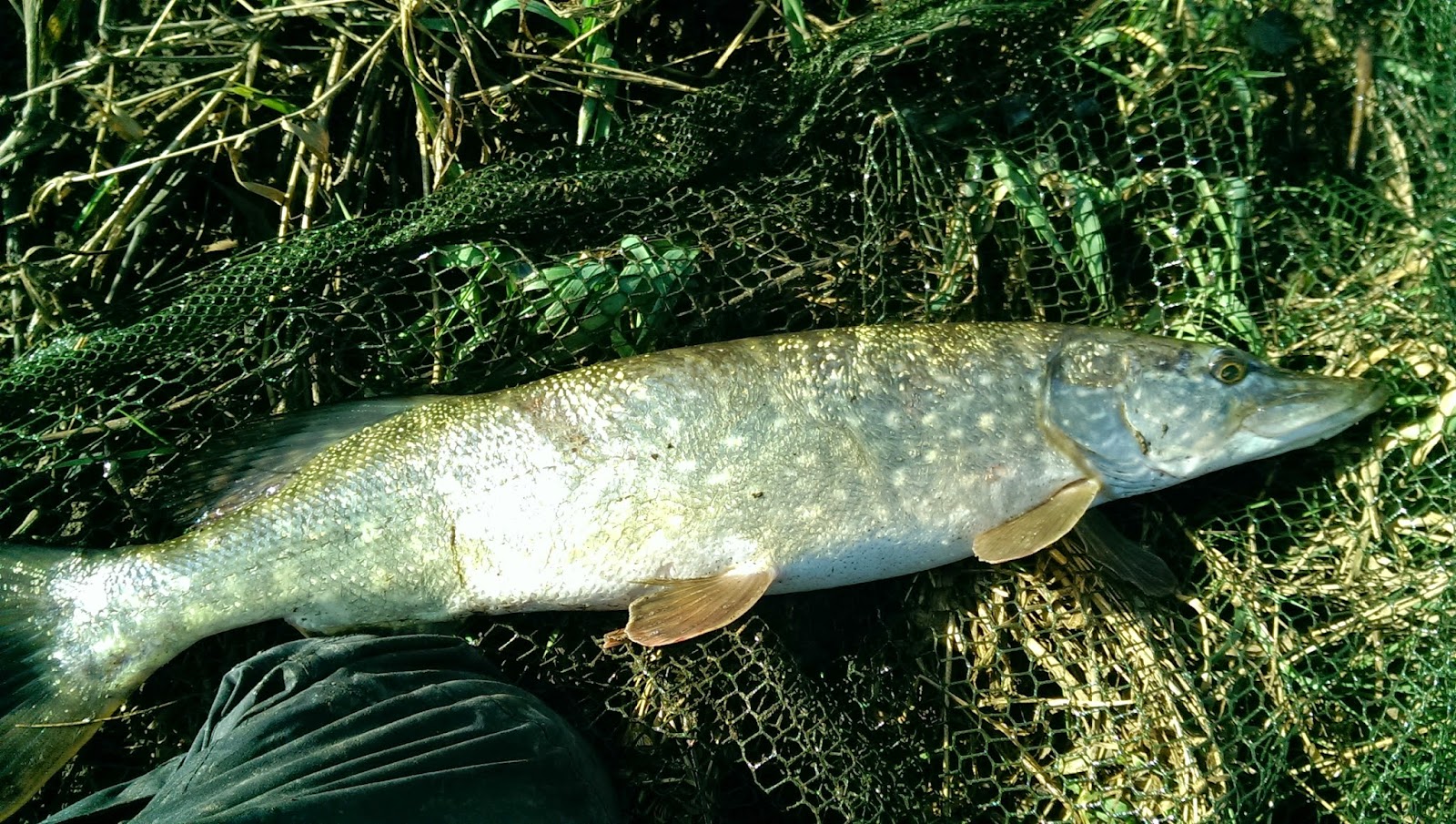 I was out of Roach so switched to Smelt. 5 minutes had passed when the rod ripped around. Striking I could feel the fish shaking its head underwater. I didn’t see the fish take it this time but it felt a slightly better stamp, and after a bit of running up and down the swim I coaxed another fish into the net. This one was a bit “gutty” and up near 8lb. A bit of thrashing about in the net meant it ejected the bait of its own accord. Thanks! Still quite lively, as soon as I put the fish back in the water it lunged straight down into the margin. 2 Pike in under an hour, what a result. I gave the swim another 15 minutes, and then moved a further 30 yards downstream.
I was only going to fish until half 12, which meant I had about 10 minutes to try this new stretch. On the stroke of 12:30 the rod pulled around and I was into another fish, and this the biggest of the day. It seemed intent on staying deep, but after a dogged fight I pulled the fish over the lip of the net. I didn’t manage to photograph this one on the bank because my landing net handle decided to detach from the net. Fortunately I could grab everything and safely bring the fish in, but all thoughts went blank when for an instant I thought I heard something go crunch. The fish topped the scales at 9 ½lbs and with that I packed up feeling very, very happy. 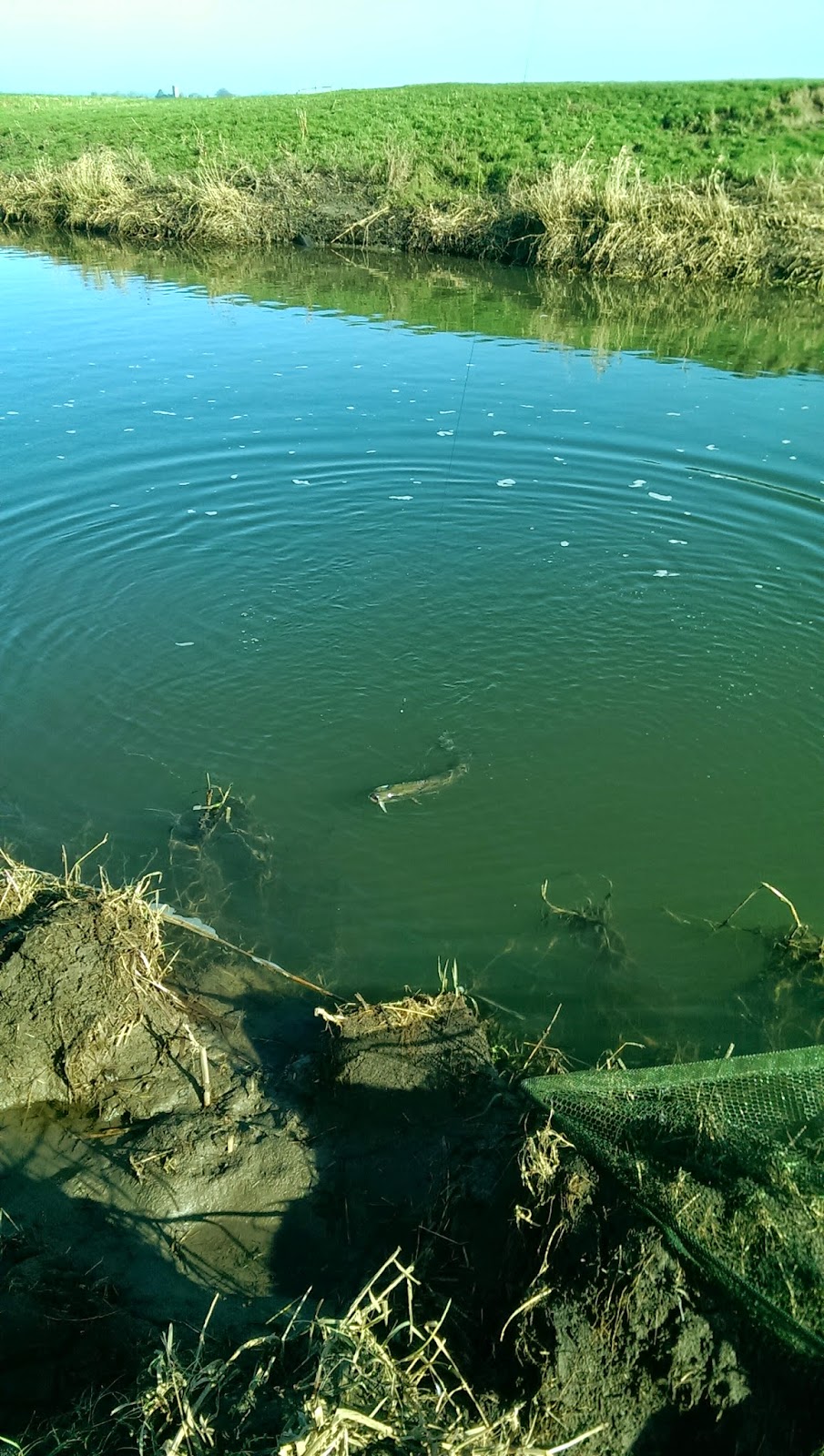 Heading back to the car I had a quick chat with the angler who was catching Roach. He’s had a few over ½lb, but the rest were “tiddlers”. I think that section of the river could do with more than a drop of rain to bring the fish on to feeding. I wished the guy good luck and headed to the car feeling very pleased with myself, and I will definitely be returning to the stretch very shortly.
As a rating I would say;
Fishability – ****
Accessability – ***
Value for Money – **** £-Free if part of a club which falls in with SLAC
Disabled Access – * ½ – Although the banks are flat there are various gates which need to be hopped and negotiated. The ground is also quite muddy in places making pushing a wheelchair almost impossible. It could be possible with a Zimmer frame albeit difficult.
Share