Just a snippet of a post from me this week, as there was extraordinary amounts of cleaning and shopping to be done. Also, by the time I had worked out I had time to go fishing I was only going to have a couple of hours spare. Fortunately I had renewed (and bought new) local club licenses so I can now report I am a member of Yeovil and Sherbourne Angling (though I did not pay the extra £50 for access to Sherbourne Castle). I cannot wait for the river season to start up again, especially with all the drains I now have access too. Anyway, with my new license in mind (and S.L.A.C), coupled with a distant memory that Higher Kingcombe Lodge Lake held some big carp, I blindly grabbed a rod and reel from the shed, a bag of bits and I was away.

I’ve fished the lodge lake a few times before but usually early or late in the coarse fishing season, and I’ve always known about the lilies and pond weed. Today was something unexpected however as half the lake was covered in pond the stuff. Still I set up my rod which turned out to be my 9ft SavageGear Spinning rod, Shimano Sienna filled with 8lb line and not my 12ft Carp rod. That’ll teach me for grabbing gear without checking. Connected my mainline to a swivel on an adapted clear bubble float to a 3 ft 7lb N-Gauge hooklength with a size 14 QM1.
I could see another angler working the bank, looking for feeding fish, but I could also hear carp slurping right in front of me. I threw out some pieces of bread, hair rigged on a Enterprise Fake Floater and cast out into a small area of clear water. I love this style of fishing and without wanting to sound like an overjoyed school child, watching these carp appear, slurp down the bait and disappear is exhilarating stuff. Within 10 minutes of starting I was in to a fish. A lovely Common which took the scales over 11½lb.
This fish had spooked the others in the swim so it was time to move. I walked around to the other side of the lake, and welsh jokes aside I was joined by some very intrigued spectators, who I had to chase off with my landing net. 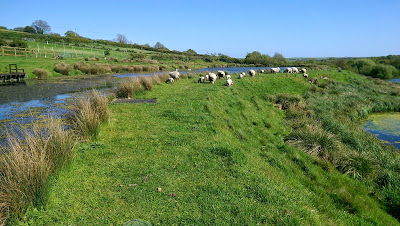 I looked over and saw the other angler firmly connected to a raft  of weeds. I threw out some pieces of bread a waited for the carp to re appear. After a few minutes a fish decided to take my fake bait but on striking, the fish turned and straightened out my QM1! I have never have this happen with such a robust hook before. I remade my hook length and kept trying, but despite losing another fish about 30 minutes later because of a lapse in concentration, that was it for me. The initial fish had made the trip worthwhile for me and I was glad to have caught a low double and lost 2 others after fishing just over 2 hours. This is a venue I will be returning to throughout the summer to try and target some of the bigger fish that I have been told the lake hold. I’m not sure where I’m going next weekend, but after some requests I think it’s time I brought my paste fishing up to scratch…