I was quite excited today to be trying out a new fishery, and this week it came in the shape of Avalon fisherybased right in the middle of Shapwick nature reserve. It was quite easy to find although negotiating the parked tractor on the lane to the venues entrance did almost leave me in a trench. I was also pleased to find out the there was a small tackle store on site which meant I could restock my pellet supplies as well as purchasing a new pellet bander after losing my last one. I had looked at the website and had seen the layout out of the lakes, the pictures however had not prepared me for the efficient layout of the venue which I saw on arrival. I’ve fished a few pegged commercial venues previously but this was something else. 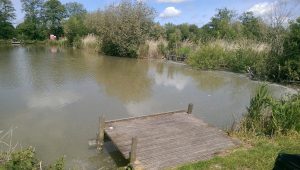 The pegs nearest the tackle store were already taken with a small group of anglers all looking like they were taking part in a friendly match. I had a look at the lake map and decided on one of the top two corners, but on parking up in the top car park the opposite corner was taken which left me one option. A quick glance at the peg and I was glad I picked the it, I could see groups of carp surfacing in the corner and all along the rushes on the right hand side.
For Carp I would be using some soaked pellets for feed and 8mm and 10mm banded pellets and for some of lakes silver fish I’d be trying the Maggot and Caster approach. My rigs and topkits were as follows;
I’m glad I had made some deeper rigs as I found on shipping out this wasn’t the same depth as your regular commercial, with depths of 7ft+ at 9 meters.  Fishing any further than this was quite difficult as I had a wooden fence with a jeep snugly parked close behind me. I opted to fish on the deck for silvers and shallow for the Carp. My first fish was taken on double red maggots before I had reached 9 meters and small Roach of a few ounces. 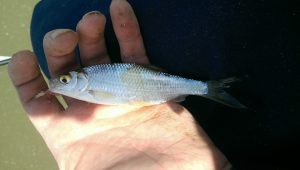 I had seen several Carp moving along the right hand side and after 5 minutes I switched top sections and decided to fish shallow, firing pellets over the top. After 3 minutes I hooked into my first carp, a long and lean fish of around 5lbs. 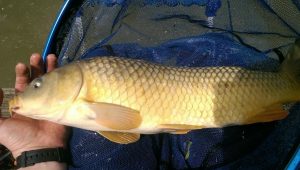 The next fish was an incredibly ambitious skimmer! 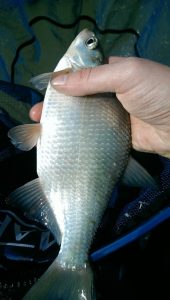 I managed another carp, fishing less than 6 inches under the surface. Although this one was so lively it also jumped out of the landing net and back into the lake.
The carp in this lake fight like trains and my next fish certainly confirmed that… with dire consequences. I had foolishly decided to act on my ambitions of getting Carp out of, what was described by a watching angler as “the pit”. It was a hollowed out section of bank surrounded by bushes and snags, sunken and visible. The fish took off, heading straight into the middle of the “pit”, I was trying to coax the fish out of its cover, when the fish decided to swim around an underwater snag. This was well and truly stuck. I tried to pull the line free but I had lazily kept my pole connected and shipped diagonally behind. The angle of the of the pole and the strain of the elastic resulted in not one but 2 enormous cracks and my top section zipped off towards the bush. I was absolutely devastated, and after a few minutes of trying to see how I would continue fishing I grabbed my landing net walked around the corner of the lake and fished my sections out of the bush. I broke down my pole sections and telescoped the broken section packing it up,  hoping it was repairable.
In the mean time I dug out the pellet waggler and attached one of my waggler reels with 4lb Maxima Chameleon. Although I felt incredibly downhearted about what had happened I had only been there for just over an hour so using the rod and line definitely seemed like the best option. Fortunately the root around with the landing net hadn’t put the fish off and I was into a another fish within 5 minutes of setting up.
I found that I would get A LOT more bites the closer I cast to the tree, but 3 takes and 3 broken hooklengths quickly meant that I changed my mind.  I found that fishing just off the tree and feeding heavily resulted in a catch rate of 1 fish every 5-6 minutes. The biggest of which came in at just over 9lb.
I fished for another 2½ hours before deciding to call it a day, I think the fact the I knew my pole was broken meant I didn’t fish the venue as hard as I normally would have, and occasionally I found myself casting quite badly, and leaving the float there… Also as I had arrived late on, a lot of the carp anglers were packing up. The car park(s) at the venue were fairly busy and I needed to move the car 3 times before finishing packing up and heading home.
Avalon is a great fishery and had I not snapped my pole I think I would have really enjoyed the day, as it stood I was happy to have caught a few fish and the venue is undoubtedly a great match venue. I will admit that the pegging structure on arrival seemed incredibly tight, but after fishing the venue it was fine. My only complaint was that I couldn’t ship back that far. The fish in the venue scrap like crazy and there are plenty of them! The onsite shop has a reasonable selection of floats, hooks, accessories  and pellets which means you can arrive bait less and buy enough pellets to have a successful day! The venue seems to be heavily dominated by pellet (and pellet waggler) and paste and it is no wonder the some big weights regularly come out making it a favourite for many match fishermen. I would openly recommend this venue to anyone who was looking for a busy fishery in the North Somerset region, especially as I have read that Vic Bush the fishery owner has said every peg is capable of producing 20bs of silvers (mainly skimmers).
As a rating I would say;
Fishability – **** Lots of options with many of the pegs having islands to fish too
Accessibility – *** ½ Relatively easy to find although the farm track you have to drive down can be tight near the gate (as it was for me narrowly avoiding a trench before opening a gate).
Value for Money – **** £7 Standard amount for a commercial venue in the region
Disabled Access – **½ – All pegs and wide enough to fit a wheelchair, however getting the chair to the pegs would prove very difficult without assistant.
Share