Today we (my Dad and I) were heading down to West Bexington in search of some lunch. I had spoken to some anglers the week before and they assured me that Mackerel were coming out thick and fast so I was “guaranteed” to catch. We’ll see…. After walking around West Bay and getting blown all over the place this previous day I wondered how good the visibility was going to be. I had fished the same beach (although slightly further along at Abbotsbury) the same time last year and absolutely bagged up so I was hoping for a repeat. 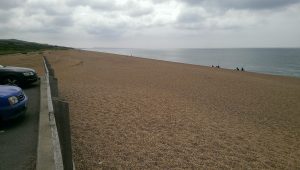 West Bexington is a great looking venue, and has a large car park right on the beach front, so the only walking we would be doing was along the beach to our desired location. I would be using a Continental rod (long and bendy as appose to the shorter and stiffer British beach casters) and a large fixed spool, with a 3 hook clip down rig. My Dad would be using the same but with a multiplier rather than the fixed spool reel. I also had a light carp rod set up with some size 6 feathers and a Dexter wedge for the weight.
Between us we had 1lb of Ragworm and some sand eel, so after baiting up and casting to the horizon we began the waiting game. Looking up and down the beach no one was catching fish, and after 2 or 3 re-baits (the crabs had bitten through one hooklength), I bit the bullet and cast out a set of feathers. Within 3 casts I felt a knock through the braid. It was a tiny little pouting, this was followed by a tiny horse mackerel which got plopped back in before the gulls could get it. 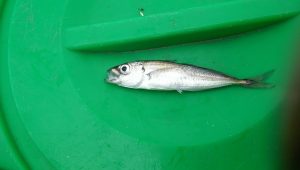 After an hour or so my Dad wound in his lines and had a “double header” which involved 2 of the tiniest fish he had ever caught from the sea. They were returned before any pictures could be taken but when winding in my line I realised I was attached to what looked like coral. However, it was a hermit crab, which I quickly removed from its shell and elasticated on to the hook. After 5 minutes that gave me my first proper bite, and on winding in I found that I had caught a Gurnard. 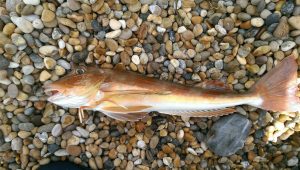 I returned the fish and cast back out and within 10 minutes I was in to another, only this one was slightly smaller. 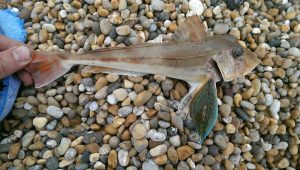 We had fished for around 3 hours and at that point we decided to call it a day. Sadly not one mackerel was caught (by me or anyone else on the beach) and the only better fish came courtesy of a very unlucky hermit crab! Still, it was nice to get out of the house and get down to the beach. It was also great to have beach side parking which is a huge plus for West Bexington.
It would be difficult to rate this venue as I only fished for a few hours, and wasn’t trying overly hard, but it was easy to find! Next weekend I’ll be travelling home for a potential trip on the fly, so until then…
Share