As I’m sure I’ve said before fishing a new venue comes with a certain level of excitement. The unknown is a factor which means you usually have to prepare for all methods of fishing, and try what you believe is the best on the day. Having done a bit of research into this venue and thinking I had the measure of it from the help of Google Maps, I arrived at the lake in the late morning and instantly felt over prepared. The lake looked more like an overly large duck pond than a fishery. Never the less there were some people scattered around the pond so I knew I was in the right place. I wheeled my gear around to the conifer side of the lake and before long I was setting up wondering what this little lake was going to throw up.

Speaking to a few people around the lake it seemed that the fish weren’t being caught in any great numbers on either the ledger or the waggler, so with that in mind I decided to fish a short pole out into open water using my top 6 sections. This would also be long enough to reach both potential margin pegs which I would bait slowly throughout the day. However, setting my pole up was more difficult than I initially expected. The conifers were only 2 metres behind me and the steady 20 – 25mph wind meant that shipping in at almost 90 degrees to my seat box was the only option. Attaching my first rig and plumbing the depth, I found that the section of lake that I was fishing was a uniform depth of around 2 feet. Setting one line with maggots and caster and the one in the margins with meat, worm and corn I shipped out and waited for my first bite of the day. 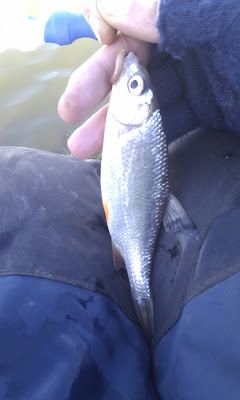 Once my bait was in the water I started to catapult in small pouches of maggots and it wasn’t too long before my float had disappeared and I was shipping in my first pole caught fish of 2012! A small Roach of a few ounces. Still this was a good start as I hadn’t been fishing for more than a couple of minutes. Shipping back out and re introducing a pouch of red maggots the float zipped away again and this time the elastic of my pole showed. I pulled in a nice Ide of around 7 – 8 ounces. Slowly feeding my swim meant that before long a steady stream of nice sized Roach and Ide were making their way to my net giving my elastic a long awaited stretch. I was happy to be catching fish and despite the cold conditions (at one point my landing net had frozen to the banking) it seemed as though the fish were generally on the feed as the other anglers were starting to catch too. 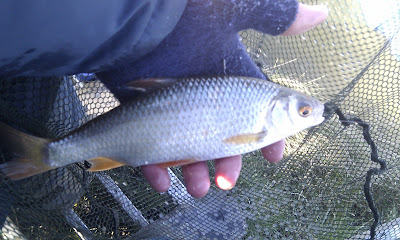 I continued to catch in this way for the best part of 3 hours, and only when I noticed my bait box was looking decidedly lighter did I decide to fish my margin swims for some of the bigger fish that I had read this pond contains.  Baiting up with double corn I dropped my offering close to the feature on my right and waited. The float sat still for several minutes but then the float started to bob on the surface before disappearing off into the murky water. On striking, I instantly felt that this wasn’t a big fish but it was a bigger stamp of fish than I had been previously catching. An Ide of around 1lb found its way into my recently thawed landing net. Switching to worm I hoped for a Chub or specimen Ide that I had occasionally seen in the water nearby. But trying worm, double caster, treble maggot and pellets all brought in fish of a similar stamp. My last attempt at catching something special rested in meat. Switching margin swims, I fed a few square chunks of meat and punched out my hookbait, a perfectly cylindrical bait which slid down nicely on the shank for my hook. This time the wait was much longer and 15 minutes went by before my float started to bounce around again. This time when my float disappeared a number of things happened in an instant. The elastic in my pole erupted straight down in to the water, the reeds to my left swirled and my pole began to bend under the strain of the elastic. This was all before the hook pulled I was left cursing the one that got away!

Switching back to feeding maggot and fishing caster I quickly began catching the hybrids that had plagued me earlier in the day and before long the maggots I was using were all but gone! It was around 4pm that I decided to give up the ghost and after catching my “last fish of the day” 4 times I unclipped my rig and began packing away thoroughly surprised at the number of quality of fish that such a small lake had to offer.

Dickies Pond is a venue which if you were prepared to fish all day for good quality silver fish you could easily a mass a large weight. I estimate that I caught in the region of 20lbs+ of the silver fish but could have easily trebled that weight if I brought the fish in closer and switched to a more serious set up. The venue offers about 12 pegs and is one where any angler could enjoy wetting a line and catching a large number of fish. It is also somewhere that as an angler you could practice fishing various “up the water” tactics as I ended up doing. Despite the cold wind and near freezing water temperature I finished my session using a rig length of 10 inches and found that the fish kept on feeding. All this action for the princely sum of £5! Although I tend to have a preference for larger and more established waters it is definitely somewhere I would recommend you go if you wanted a pleasurable session catching quality silver fish. It is also somewhere I intend to fish again once the Tench which I know the lake hold come out of hibernation! But for the next few weeks at least I’m going to set my sights on somewhere that provides a bit more of a challenge.