I should have realised when my bottle of squash began to freeze that today was going to be a tough and disparaging day. But I was happy to be on the bank and warm because of the thermal suit which once again I was trying to put through its paces. Setting up on the bank of South Accommodation road (a Leeds ASA stretch) I was unsure of what to expect from the venue. Having never fished it before but being told that this part of the river held big numbers of specimen roach, I set up 2 rods. One I setup with a light line on which I would be fishing a single maggot or caster, and the other, a more “beefy” set up ready for any of the Chub the river held. 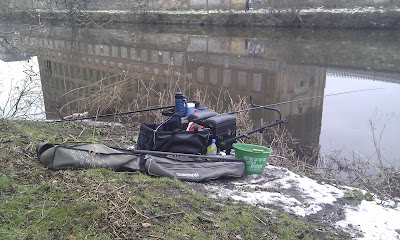 The air temperature was hovering around freezing when I first managed to get a line into the water and I began firing maggots upstream so the slow flow would push them directly into the path that my float would be taking. I was surprised how deep the stretch was and before long I had adjusted my line to a depth of around 7 feet, bulking up my float weight in the process. 45 minutes to an hour had past and I had tried every type of bait I had with me and not so much as a bite! At this point from across the river a walker began calling out to me. I was told that the section of the river I was fishing was best fished on the feeder or bomb (I chose not to bring either of those rods on this day as I quite liked the idea of a day’s Roach bashing on the waggler on this slow moving stretch of river), and that “no one ever fished that peg on the float”. My conversation was rounded off with being called “love” which I thought was a bit odd, and carried on fishing the waggler. 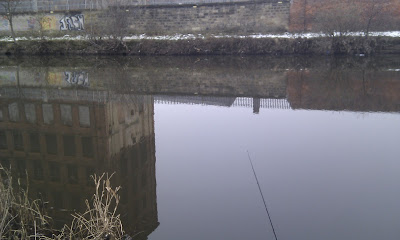 My session continued for the best part of 2 and a half hours, and despite casting shorter or further and fishing shallower or deeper I didn’t manage to persuade one fish to take my offerings, which were now being fished on a size 22 hook, in the hope that the fine approach would at least bring on some bites. It was then that I reached for my drink, which now resembled more of a freeze pop than liquid. At that point I decided that enough was enough and that today would simple serve as an exercise in humility (and drowning maggots).

The temperature hadn’t occurred to me as I was and had been very warm all day. Now that I have worn my Avanti Cyclotherm suit on several outings and in the cold and wet I think I’m in better position to give a more thorough review of the product.

The salopette element of the suit comes sufficiently up the wearers back to prevent any drafts and discomfort from the cold. It also has numerous large waterproof pockets (2 on each leg), to allow the wearer the keep their phone, wallet etc in a safe and dry place knowing that the large Velcro fasteners won’t release easily. The bottom of the trousers is also fitted with a large zip up the side of the leg and a Velcro storm cuff  which (when unfastened and unzipped) allows the leg to be big enough to fit over any wellington boot (in my case the Sundridge Hot Foot). The jacket of the suit is equally warm and is a lined double layered coat with a detachable fleece and storm cuffs. There is also a detachable hood and even more Velcro’d pockets, 2 of which are also fleece lined and one on the left hand side is zippered. Given that it is fully water proof  most marks can be wiped away with a warm damp cloth but the Jacket, Salopette and Fleece can all be washed at 40 Degrees (according to the label). The coat is also windproof which stops the early onset of cold and the height of the salopette only compliments this. To my knowledge it is available in 2 colours, I went for the dark blue but it also comes in an olive colour which is preferred by Carp Anglers (or so I’m told). All in all it is well worth the £49.99 selling price, and although more cumbersome than some of the more expensive brands it still allows the wearer enough flexibility to move around easily enough and will certainly keep you warm and dry on the more miserable days the our beloved sport throws at us! 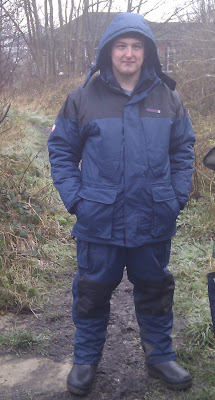 But back to this venue, although not producing any fish on this day it is undoubtedly a stretch and has been review very highly by Leeds ASA members and I will try it again once I have a better knowledge on how to fish it. Despite being told that the ledger method is more productive, I am sure that the float would produce equally good days but perhaps it needs to be a few degrees warmer before I visit that water again.