After reading recently that Peterstone Lakes was fishing well for good mixed bags, I thought it was time that I paid the fishery a visit. The drive to the venue goes very close to the coast, and is surrounded by small waterways which got me thinking about fishing them. A trip involving jungle warfare for another day perhaps. Today I would be fishing with my grandfather (Colin), and together we had decided to fish the pole on one of the smaller match lakes to try to entice out some fish that these lakes held. The Biggest lake on the complex is now part of the Birch Syndicate and although it has previously been a match fishery, it is holds some big carp, and some equally large Pike.

Parking at the venue is great, with a small incline up to the lakes. We decided to fish the first lake on the right as you go through the gate, and after a walk of no more the 40 yards my grandfather announced “that’s as far as I’m walking”, deposited his box and began setting up. We found out later that you can actually take your car up to the waterside, which is ideal for disabled anglers. The wooden platforms/pegs around the lake however, left a lot to be desired, with severe buckling effecting more than 50% of them. We were told later by the fishery owner Martin that they are all to be replaced with concrete slabs on the bank, which would also create more room. For the time being however, I would have to make do with a small section of bank next to my ruin of a platform. No matter, I was here to fish, and before long I was set up and plumbing the depth of my potential swims. The lake averaged 2 feet and both my margin swim and open water swim only varied in depth by 3 inches. 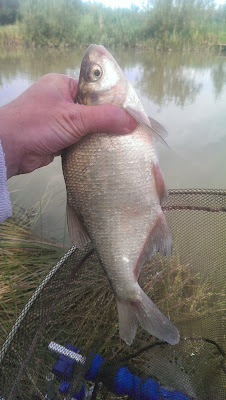 Already fishing, and using red maggots, Colin was into a fish almost straight away – A small roach of around a few ounces. He continued catching a steady stream of silver fish, and was quite content catching some of the larger skimmers that the lake had to offer (for now). I started with “old faithful” double red maggots, landing a perfectly scaled roach, but quickly moved onto a caster and maggot combo which proved successful in consistently catching skimmers. Double caster definitely saw a better stamp of fish, but the bites were more infrequent and delicate. Still, 2 minutes of waiting and a pouchful of loose feed and the float slunk away. I was into a nice skimmer well over 1lb. These continued for the best part of an hour until my float vanished and my elastic (a soft number 8) burst from my pole and I was left playing a small mirror carp of around 2 ½lb. Bringing the carp to the net it gave one last shake of its head and shook the hook! Damn! After a little bit of goading from Colin I upped the ante and switched to a 12-14 elastic with an 8mm banded pellet.
The bites were now a lot slower in coming and I had to wait the best part of 5 minutes before my float registered a slight knock. In the meantime, I saw that Colin who has been fishing double red maggot all morning was into something more substantial. He had recently landed a carp of around 2lbs, but the fish he was currently playing decided to surge off when right at the bank. He called me over to inspect his quarry. A Pike! Successfully landed on the pole! Something that I never thought would happen. Apparently he knows his stuff when it comes to fishing… Ok, so he may have been part of the Gold medal winning team in the Bulgaria world fishing championships 1989…Whatever. 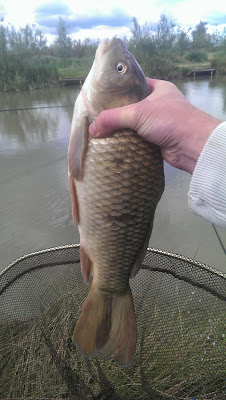 Shipping back out with a fresh pellet, a bite registered immediately. The float vanished and my pole arched around to the right. This fish was a steam train and sure enough after its first initial run it spat the hook. Unbelievable! Still, now I knew the fish were there, regularly feeding a mixture of pellet and caster meant I should be able to get another one fairly soon. To cut a long afternoon’s story short I lost 7 fish like this. 7! Clearly this is an unlucky number for me. After a quick re-group session and some sound words of advice from Colin, I set about trying my luck one more time before reverting back to skimmer bashing. For the eighth time my float vanished and I managed to steer a nice F1 carp to the net. These hard fighting fish go berserk when hooked and as it’s such a narrow venue their only option is to go left or right, which can cause frustration with anglers on the surrounding pegs.
Returning the fish and looking out at my swim I noticed something decidedly “fishy” about it. Mainly that Colin (clearly jealous that I was getting bites) had set his pole to 14.5 meters and was fishing exactly where I had been previously! I decided to join the fray once again in the hope that he would move. He didn’t, and for the best part of 15 minutes he sat there waiting for the fish that never was. What I found funny, despite the fact that he was using the same bait as I had, I was getting bites and he wasn’t. Huzzah! 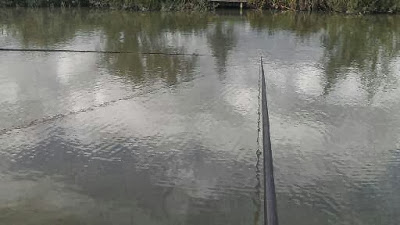 Several times during the afternoon I switched back to my lighter set up for the occasional silver fish, every time with results. I successfully managed to catch several quality skimmers and a great roach (which looked to have narrowly avoided death by cormorant) every time on; maggot, casters or a combination of the 2. I have mentioned in my previous posts that I should increase my elastics to suit the more commercial fisheries; I am still yet to do that. That may go some way in explaining how I lost so many fish, but it can’t account for all of them. Although pleased with the number of silver fish that I caught, those 7 lost fish would have added a considerably amount of weight to my bag!
I will definitely be returning to Peterstone lakes, if only to make amends for the fish I lost in this session. There are several lakes which can be fished, all containing a good head of mixed species (including Pike apparently). But I would be careful when selecting a peg, and if in doubt stick to the bank, as the current wooden structures may submerge at any moment. I would also advise you to take a windproof jacket. As the venue is so close to the sea, the wind is always blowing and I was quite thankful to have remembered to pack my trusty fishing jumper. Peterstone is a good venue to practice catching a range of species and for £6 a day it is one of the more reasonably priced ones in South Wales.
As a rating I would say:
Fishability *** ½ – Nice lakes but clearly man made.
Aceessability ****
Value for Money **** – £7
Disabled Access *** ½ (Good access on foot and by car, particularly as you can drive right up to the lake, but until the concrete slabs are down in place of the existing wooden structures stick to the bank)
Share