After last week’s trip to this complex I left and immediately wanted to return. The conditions were pretty horrific and despite catching, I knew these lakes had more to offer. Also after a few emails to Dorchester DAS to find out more on the license swap situation I discovered that as an Ilminster AA member I was also allowed to fish Higher Kingscombe Farm’s Lodge Lake. Not that I was shying away from the previous lake, but I was keen to see what the other lakes had to offer, and the with prospect of some “clonking great big roach” as described by Dorchester match secretary Steve Sudworth I was keen to get back out there and give this lake a whirl.

The great thing about the Lodge lake is it has parking right next to it. More than that though, it has a few pegs which are specifically for disabled and infirm anglers, something that there is just not enough of in most fisheries. On arriving I could see there were 3 carp anglers setting up. I quickly scanned the lake, and walked over to the carp anglers asking them how best to access my desired peg (to their right). I would need to re-park and walk. No problem though. A car move and fair walk later and I arrived at the peg to be told by the 3 carp anglers (all fishing from the same peg), that they had “this corner covered”. From where I ended up fishing I could see, they had 1/4 the lake covered. It was frustrating to make the journey and be told I couldn’t fish where I wanted, after already mentioning it to these guys. Anyway, after re-packing the car I headed back to my initial peg choice. I chose one of the big comfortable plastic/wooden pegs directly in front of the car park. The lake was very quiet so I picked the peg closest to the water inlet and reed bed. It had a few options, reeds to my right at 9.5 meters, small reed bed in front at 7 meters, the water inlet (which I didn’t get round to fishing) and the obvious open water swim which I would fish at 9.5 meters too!
I had made my rigs the night before and was really pleased to see that I guessed the depth straight off! A uniform depth of around 4ft, with a marginal shelf going up to just over 3ft. Dragging the plummet around there was significant under water pondweed growth, so I decided to come up off the bottom and fish around 3ft to start, shallowing when, (or indeed if) the fish decided to come up in the water. Shipping out on double Red (as usual) and spraying maggots over the top it was clear to see that fish were definitely on the feed (more so than the other lake) and I was getting line bites instantly! I lifted my rig out and dropped it back in. The float carried on going as it cocked and I was in to my first fish. A beautiful Golden Rudd. 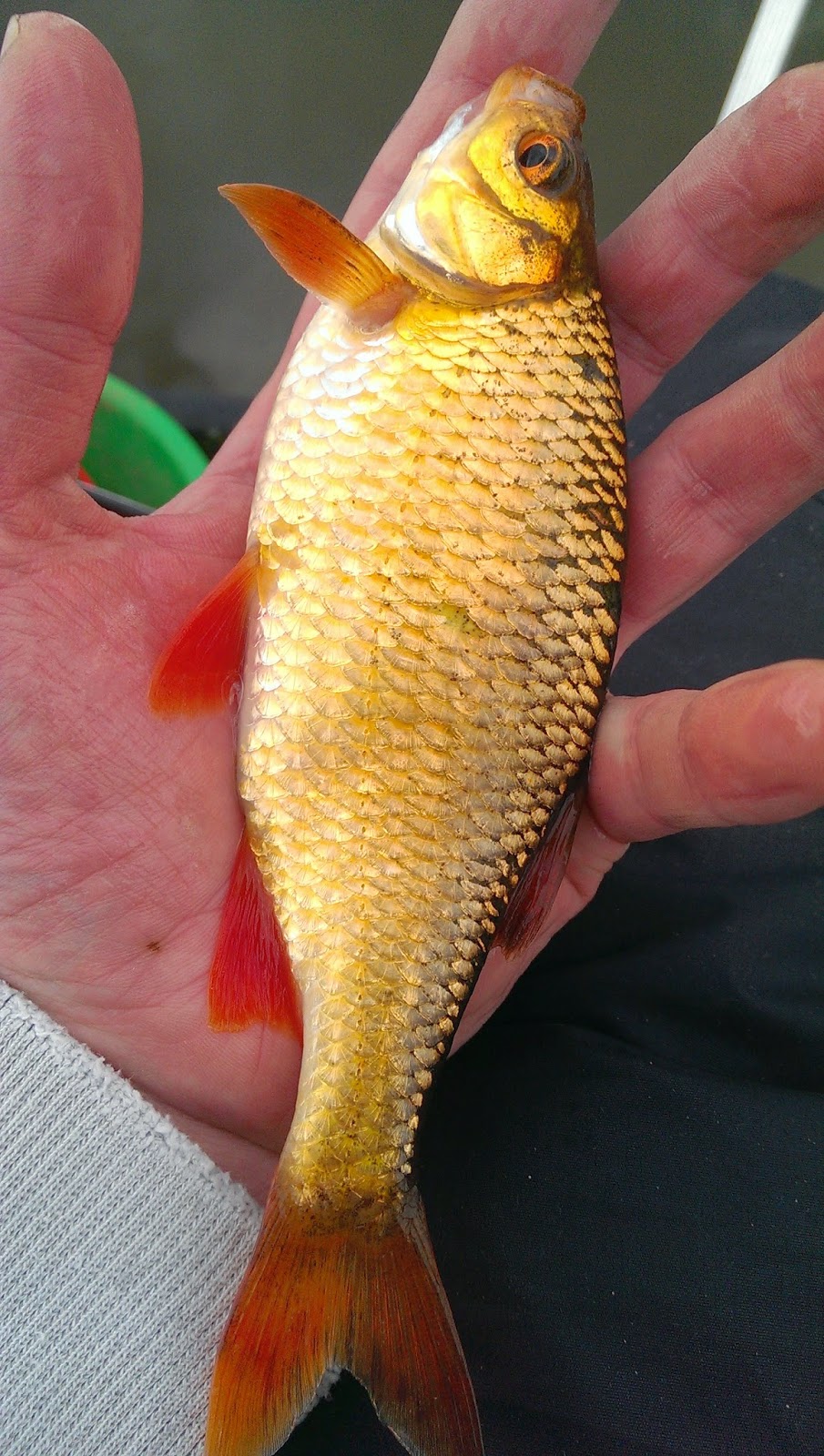 Shallowing up slightly, and adjusting my bulk shotting to a more “on the drop” pattern I shipped back out and in the next minute or so I had 2 other species. A normal Rudd and Roach. These were followed by a stream of good quality silver fish, until something a bit more serious took the double maggot offering and charged off before I could stop it. Fortunately I didn’t lose any tackle and I shipped back out with double maggot on the hook. Again, something substantial took my hook bait and it gave a great fight on the solid Middy 8-10 elastic. I only saw the fish at the net and was surprised to see a Bream. Not a bad one either. 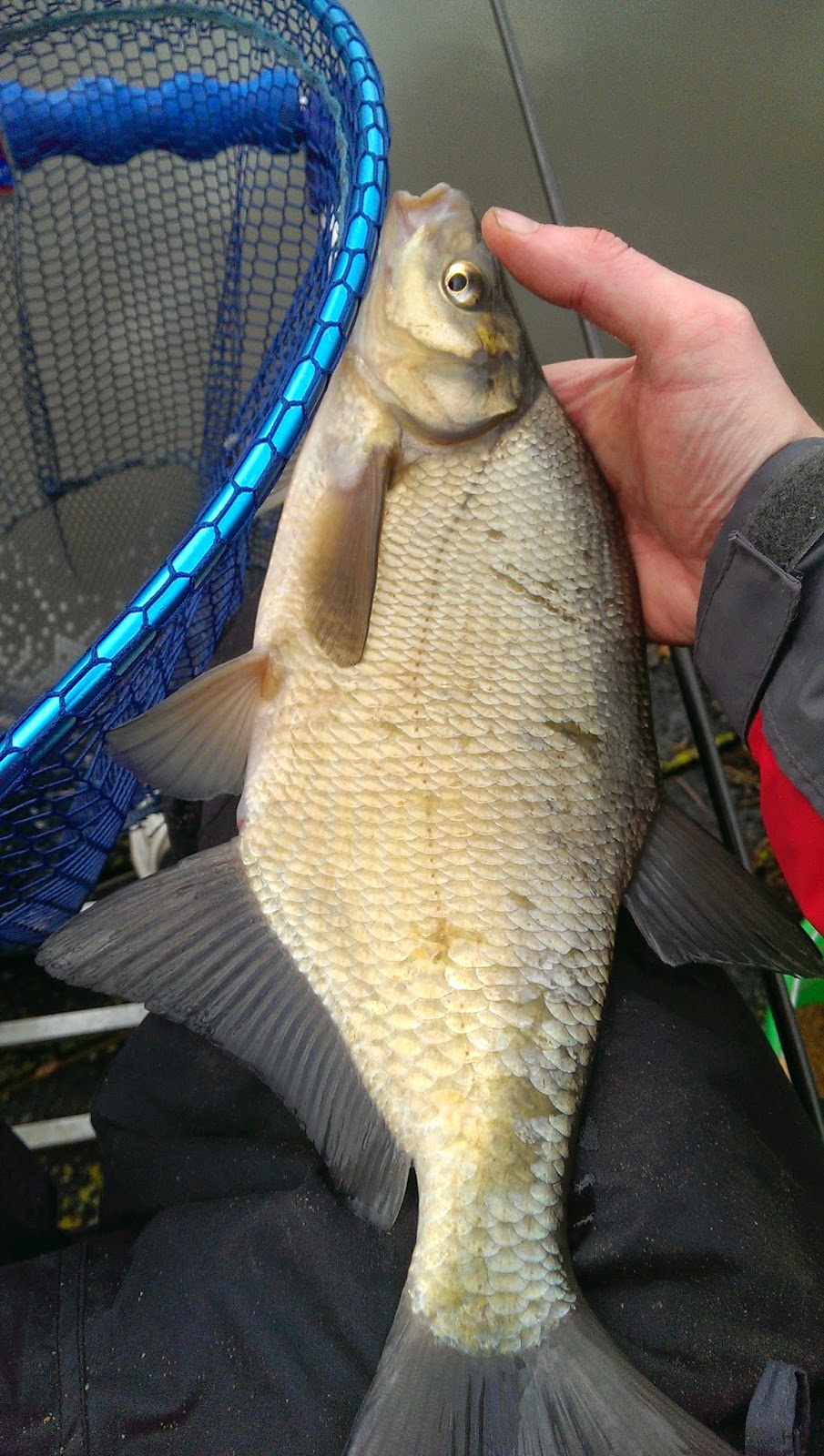 I was surprised that double caster didn’t bring on the better fish. They all seemed to be falling to double maggot, and only when I fed loosefeed over the top. Switching from maggots to banded 6mm hard pellet I tried my luck, and hoped something better would come calling. As the pellets hit the water my float whizzed off. The way it was fighting I thought it was another Bream until I got it to the net. This was a Roach, and a clonking big’un too. I rarely use weighing scales but this time I had to check. Taking off the weight of the sling, it went to 2lb’s. I could not believe my bloody luck. 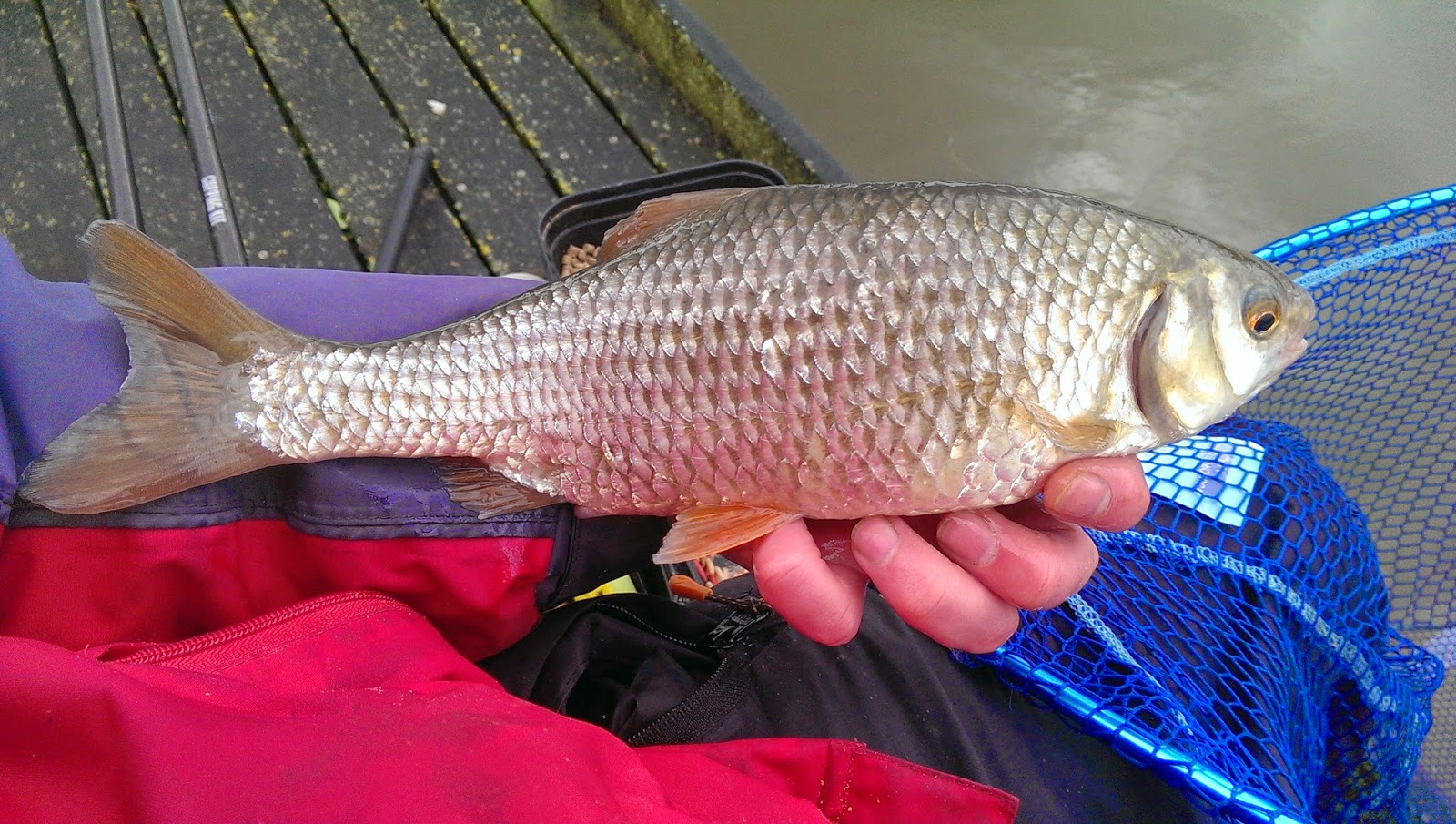 My only regret is that I couldn’t take a bigger or better photo. This fish was a real beauty, really long and surprisingly wide. Gently returning this fish to water and shipping back out I was hit again by another clonker! This one was smaller, but still a great Roach by anyone’s standards. These fish obviously loved pellets and despite several heavy showers, and the changing direction of the wind these fish were aggresively feeding at 2 feet down and continued to munch away for several hours (any shallower and the bites slowed considerably). 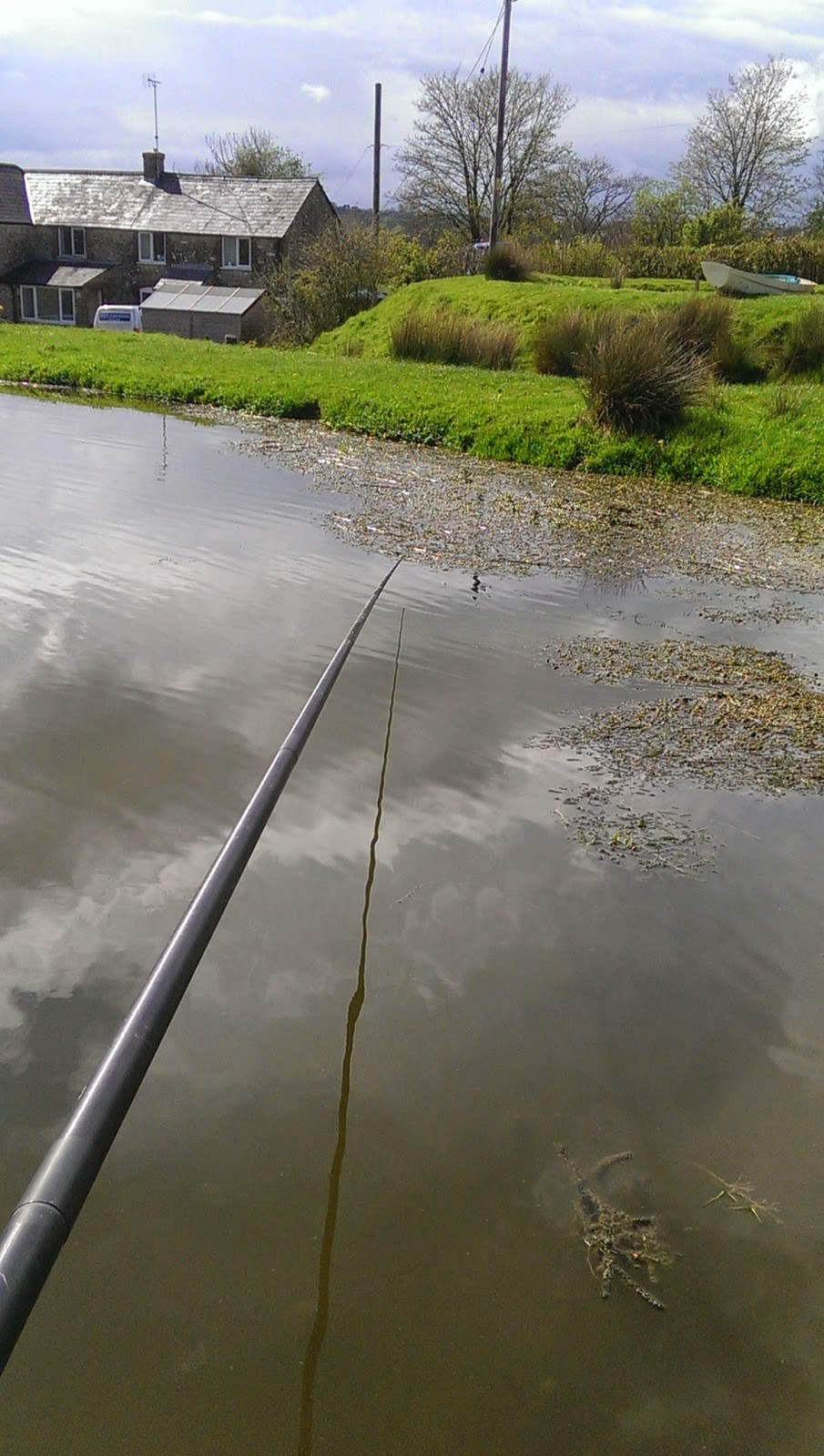 I noticed earlier in the day that the reed bed to my right occasionally twitched and I had been baiting it on and off with pellets. Switching to 8mm Halibut pellets and fishing hard on the deck I positioned the rig as close to the lilies as I dared and held on. If anything did take, it might prove tough to get it out. After 25 minutes of waiting and 2 pellet changes, all I had was 1 missed bite and 2 liners for my troubles. Desperate times call for desperate measures, and with that I switched to a mystery bait steeped in mystery glug. I shipped out and decided to fish 6 inches further on from where I had be concentrating my feed. A couple of minutes later and the float vanished. The elastic (a solid 14) came out of the pole and vanished into the foliage! A bit of a tug of war followed and the fish swam straight out of the lilies and into the opposite weed bed, then it powered through it. This fish gave one last surge into open water (at this point I thought, “this is where the hook pulls…”) and with the final bit of side strain, and with plenty of stretch in my elastic the fish turned and reluctantly came towards me. I was left with a bit of an issue now. The fish was big enough to allow me to play it on my top 5, but I had made the foolish mistake of not using all of the 3 meters of my landing net handle. Wedging the pole upright between my legs and reaching the landing net extension I hastily pushed it all together. Fortunately the fish was tired and was content milling around a few meters out. On its last ditch attempt to evade me it swam straight into the newly extended landing net, only to jump out of the water and back into the lake! That was it for the fish however, which was now knackered and it lazily slunk back into the net. The fish seemed to be as tired as I was, so I left it in the landing net for a minute or two, before lifting it out onto my mat. It topped the scales at between 9.5lb – 10lb and was a great way to finish my session. Slipping the fish back, I slowly started packing my gear away, thoroughly chuffed that I had caught my first “proper” sized carp of 2014 and broken my PB for Roach all in the same day! 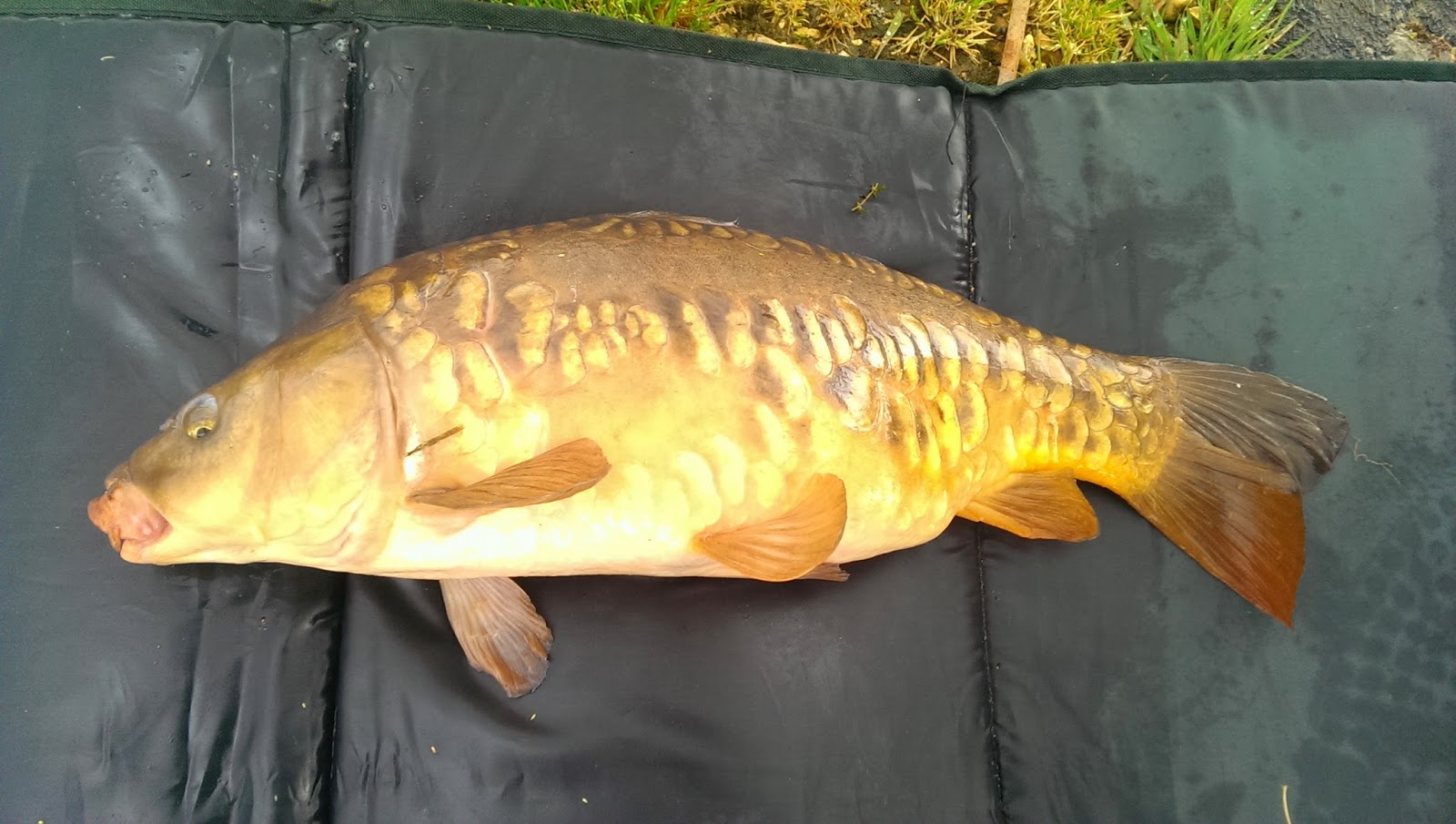 Higher Kingscombe Farm is a great venue and despite my early annoyance this turned out to be a top day! I would really recommend joining a Somerset Amalgamation angling club to get access to this specific water as it was fantastic. If not there are so many lakes at the venue to choose from you’re bound to have a good day. Car Park access for this specific lake was great, and there is a lot of options of where to fish, especially with the specifically endorsed BDAA approved pegs. I would say get there earlier to get the exact swim you wanted.
As a rating I would say;
Fishability – **** (Looked fishy, was fishy)
Accessability – **** The SatNav took me right to the venue, and the Lodge lake has a car park right next to the lake.
Value for Money – **** 1/2 £3 (As a Somerset Amalgamation club member it should cost £3, but I paid £5, but would have happily paid more) Day ticket to pleasure anglers and not available.
Disabled Access – **** (Although very close to the car park it may prove difficult to get a wheel chair down to the water’s edge and on to the disabled peg without a fair bit of help, once you’re there, fishing for the day would be very comfortable)
Share