There is a level of excitement which comes with fishing an unexplored and previously unfished venue and this was increased a hundred times when on my walk around the lake I saw a fairly sizable carp sitting in the margins right next to my peg! Clayton Ponds is 2 lakes containing a mixture of species and from what I had managed to read about the lakes on the Yorkshire fishing forums, both lakes contain some big carp, tench, specimen eels as well as the usual head of silver fish! As it’s not far away from where I live I thought it was high time I paid the lakes a visit. 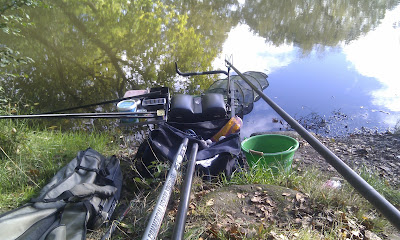 Picking the top of the two lakes (and knowing that this was the shallower of the two) I set up so that I would be fishing to a pad of lilies about 9.5 meters away. I baited my swim with Van Den Eynde Expo and Dynamite Baits Halibut fishmeal ground bait (a combination used before too great effect). I shipped out using double red maggot fishing hard on the deck. 10 minutes went by and there was not a single bite to be had. On shipping in 3 inches of my hooklink was covered in brown and black silt. Shallowing my rig up by 6 inches and fishing around 3 feet resulted in my first roach of a few ounces. Switching to worm I hoped for it’s bigger brother and shipped back out. Although the float did dip under whatever was nibbling the worm wouldn’t connect every time I struck and after 3 failed attempts at hooking into the teasing culprit it was time to hook into some of these bites. Switching from a size 16 to an 18 and using worm sections (and not half worms) resulted in a quick succession of roach and rudd, although none of any size.

The sun was warming the water now and every pouch of maggots fed resulted in small swirls of feeding fish just under the surface. Adding some brown crumb to the groundbait made it sufficiently dry that on impact with the water it created a large cloud effect. Balling in 3 sizable clumps I decided to leave the swim settle and go for a walk around the side of the lake with a waggler rod. Walking a mere 5 feet from where I was fishing I saw 2 specimen hybrids high in the water but despite numerous casts they were not interested in my maggots and eventually disappeared under the lilies to their right. Further down the bank there was a fine scum on the waters’ surface and feeding their way through that scum were scores of very nice roach and rudd. Dispensing with the waggler and using a free line approach I flicked in a few maggots followed by my own hook bait. I brought to the bank a scale perfect rudd, and in the process coming close to the water’s edge I spooked something very big that shot away into the deeper water with a splash. 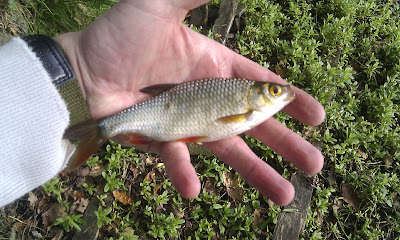 Getting back to my peg I saw that the swim was fizzing away nicely, so shipping out with double caster I began fishing about 2 feet deep. It wasn’t long before the float whizzed away and after a few seconds a nice rudd was finding its way to my net. The fish were in a feeding frenzy and it wasn’t long before 40 or more fish found their way to bank. Though after an hour or so of rudd and roach bashing the fish seemed to stop feeding, and no matter what hook bait I switched to no fish seemed to want what my hook was offering.

Moving my floats position to the left of the lilies and feeding a slow trickle of maggots seemed to encourage the fish into feeding again. Although it I didn’t connect with anything sizable, the fish seemed more inclined to take from a slow fed swim and soon enough a stream of silver fish found their way onto my hook.

Clayton Ponds is a great place to fish and has almost everything needed to be a excellent fishery. It is established, has a reasonably good head of fish, and the fact that it is free is a massive bonus. I was also amazed by the amount of wildlife around the pond, seeing newts, frogs and a variety of birds including a Kingfisher, which speaks volumes about the health of the lake.  Speaking to a passing walker, he told me the lakes were due to be filled in, but after some investigative research I discovered that this rumour has been circulating since 2006 and nothing has happened yet. Furthermore, tweeting about my catch meant that I was sent some pictures of specimen rudd caught from the ponds and this only confirmed my belief that I would return to the lakes before winter fully grips Yorkshire to try and catch one. I would recommend Clayton Ponds to anyone who enjoys a few hours of good silver fishing sport with the potential for something much, much bigger.
As a rating I would say;