I was at the point of no return with the River Aire. I have been assured that there are big chub in there but I was as yet to see or catch one. So this weekend I resolved to give it my best efforts using various methods to try and put my doubts to rest. I waited for the weather to abate as the morning had been blustery, and I arrived on the river bank to a warm mid afternoon with much less of the earlier wind. I would be using maggots, casters, bread and worm in the hope of catching a river Aire chub. 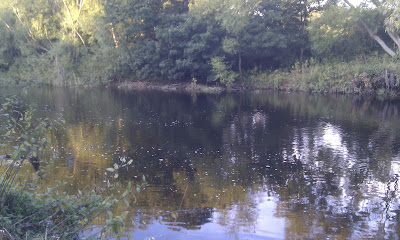 After setting up I quickly established from plumbing that the river was a gentle W shape with 2 deeper channels either side of a weedy central glide. There were still hundreds of minnows trolling up and down the margins, quickly attacking any loose feed offerings. My first cast resulted in a missed bite! I have no problem admitting my river fishing techniques have slipped ever since laying my hands on a pole (this is something I hope to remedy with some river fishing tuition the next time I’m in Wales). I chalked the miss up to a lack of expectation and a break in concentration. My second cast was met by an affirmative bite and on winding in I found that the minnows were not confined to my side of the river. Changing baits from single to double maggot and then from double maggot to treble meant that the minnows were less inclined to take a bigger bait (but they still had a bloody good go) 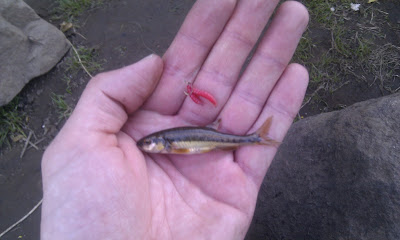 After an hour or so of what can only be described as minnow bashing, I switching to bread and another species pulled the float under the surface. This time it was what I believed to be a small chub (although I have been told it was more like a dace). It was refreshing to catch something other than a minnow and the 3 fish that followed it proved the bread and worm were the choice bait of better fish. 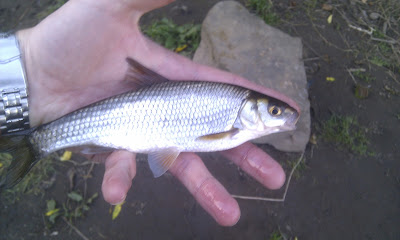 The end of the day was drawing in and a group of campers had appeared on the bank behind me. One of them was telling me that big chub have been caught on ledgered worm, and my “last cast” turned out to be more like 15! However on my actual last cast with worm, on the hook the float crept away and my rod bent around before I registered the bite. There was a definite kick of a fish felt through the rod and into my arm. One more kick and I felt the fish release! On retrieving my line I saw that my 4lb hook link had been snapped. I left at this point but would come back tomorrow with renewed hope about catching some better fish!
Sunday – Swim Feeder

I returned to the river bank late morning (hoping that the campers had left) and on the journey I walked past a father and son on route to the same location. Arriving first I set myself up downstream, so I would be casting slightly beyond where I was fishing the day before. Setting up a semi fixed bolt rig and swim feeder I cast out to find my range and the quickly started casting my heavy feed into the swim. 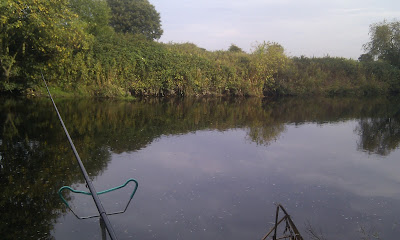 Casting with a worm hook bait I sat down and watched the father and son I met earlier set up their ledger rigs and cast to the opposite bank. As their baits hit the water the tip of my rod curled around and striking I felt the weight of a fish that definitely wasn’t a minnow! It was another small chub and I balled in 2 small golf-balled sized lumps of groundbait before landing the fish and recasting and retaking my position, this time I was using bread. 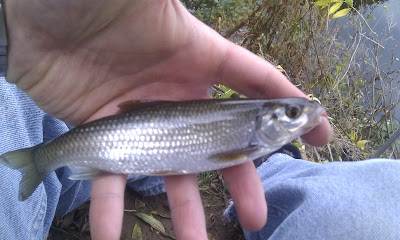 Unfortunately the minnows found their way to my bread and I had to change to a size 10 hook in an attempt to keep them away. The wind was beginning to pick up and although the fish were continuing to bite it was with less frequency. After a further 20 minutes and 2 more small chub I decided to “go big”. I balled in 3 large lumps of groundbait and cast out sizable worm hook bait and started the waiting game. After 15 minutes and a few tentative knocks, which I guess were line bites, the rod bent rod double. I barely had time to strike before the rod was bent round at 90 degrees! Beginning to play the fish it turned and bolted back towards to opposite bank. Crack! My 6lb hook length snapped! I called it a day when this happened and although disappointed at not catching a sizable chub my faith had been restored in a river I once thought had very few wily fish worth catching.

I will reserve my rating for a later session!
Share