The River Aire (near Kirkstall Road) is a hugely frustrating river to fish. Being told by anglers and EA officials alike that it is notoriously patchy meant that any future fishing trips to the river for me would be make or break! The fact that we had nigh on continuous rain for a week would only make things more difficult but Saturday was spent Christmas shopping and I hadn’t been fishing for the best part of 2 weeks! I needed to get out and cast a line. I went down to view a swim I had been told to fish when the river is in flood and decided late on in the afternoon to pop down with my 11ft ledger rod and give it a whirl.
The recent weather meant that getting to the swim was an effort in itself, and I have no shame in saying I slid down a 6 foot length of banking on my backside. The bank where I was fishing wasn’t much better, with the accumulated build-up of fallen leaves and river silt meant that every step I took was a slippy one. Setting up my ledger rod with 6lb mainline, a hi-tech 5lb 10oz hook length and size 14 Animal hook; I cast out a mouthful of wriggling dendrobena’s and positioned the rod and began to wait. It was only 15 minutes later when the afternoon started to give way to the evening and oncoming cloud cover. Not a bite yet. Looking up the stretch of water I was fishing I thought if I was going to move it would be now or never as daylight was fading fast.
Sliding 10 yards along the bank I repositioned myself and cast out. The cast itself was incredibly lucky as my worm bait landed millimetres from an overhanging tree on the opposite bank. 10 minutes past and under the darkness from the cover of the trees around me, it was getting more and more difficult to see any potential bites. I was about to start packing away, cursing another fruitless trip on the river when the tip of the rod quivered. This was followed by a charging bite, and striking, I knew the hook was set. I could feel the fish kicking away under the surface and I began thinking everything an angler shouldn’t think while playing a fish “What if my knots fail? What if it finds a snag? What if my hook pulls?!”. I have landed plenty of bigger specimens fishing over the years but I have never been more nervous watching a fish slide over the top of the landing net. 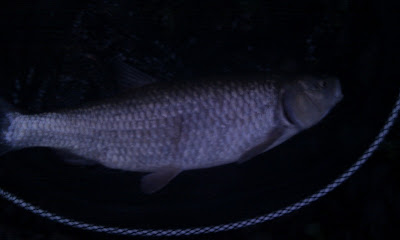 It was a chub around of 3lbs! I was absolutely overjoyed with my catch and I can only apologise for the poor quality of the photos. The light was fading fast and by the time I had unhooked the fish, released it and was setting up to re cast I decided to call it a day. The bank I had to climb to get out of my swim would be no fun in the dark.
I guess this trip proves it, there are fish in the river and with the onset of winter there are a few lesser known pegs I will be trying out in search a few more Chub. I was in a brilliant mood all evening and the pains of Christmas shopping the previous day had all vanished!
As a rating I would say;
Fishability ** ½
Accessability * ½ (Given that this swim fishes best when the river is in flood, means that the bank down to the water is horribly steep and very slippery)
Value for Money *** (£Free but accessing it is tough!)
Share