After being contacted recently by a local angler who told me that Hillcrest Farm/Needless Fishery was throwing out huge bags of carp I decided to get down there and give it a try for myself! I was advised to get there early or all the good pegs would be taken and I’d be left fighting for a peg. So the alarm was set for half 7 and the gear was ready to go straight in the car. 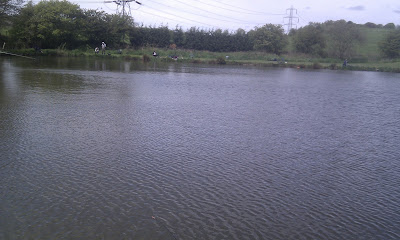 Well, sleeping through the alarm meant that I didn’t actually get to the lake much before 10, and sure enough it was busy! The triangular shaped lake had 2 sides which offered respite from the steady 15 – 20 m.p.h wind. Unfortunately those banks were full up with anglers so I would have to fish the exposed bank leaving me quite windswept all day. No matter, after speaking to a few anglers and getting the wind proof jacket on I took up my position towards the far end of the lake and began setting up. My positioning and the frequent gusty wind meant that fishing the pole was out. Still, seeing fish move on the surface buoyed my enthusiasm and with that in mind, today was a day to practice the waggler and feeder. Unfortunately I find mine are usually both sadly overlooked whenever I have the opportunity to fish the Pole. 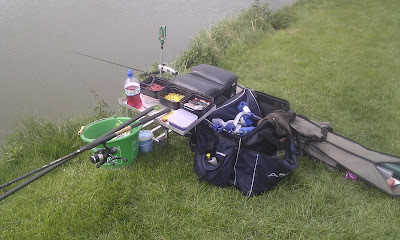 Plumbing to depth I chose to fish just off the bottom bulking 95% of my shot around the float in the hope that the fish would be taking on the drop. I also set up a small inline method feeder which I would drop into one of the margin swims to try to tempt “a biggy”. Baiting the hook with double red maggot I cast the waggler out, waited for the float to cock and began the waiting game. Lucky for me, the wait wasn’t long and within 30 seconds the float had disappeared and I was into my first fish of the day and indeed my first fish in May! A rudd of a few ounces quickly found its way to my net and it wasn’t long before the float was under again. The lake is absolutely full of F1 carp ranging from a few ounces to a few pounds.
It was at this point that the angler to my right who had been fishing in the margin has just landed a scale perfect mirror carp well in double figures. Speaking to him about tactics he told me that all the best fish in the lake usually fall to meat. So after he had offered me some of his spare luncheon meat, I set up a short line and dropped in a lump of meat about 5 feet away and only inches from the bank. Setting the rod to one side and easily grab-able if something big came calling, I cast back out on double red maggot. The lift bite that followed connected me with a scrappy tench which provided good sport on my light waggler outfit. 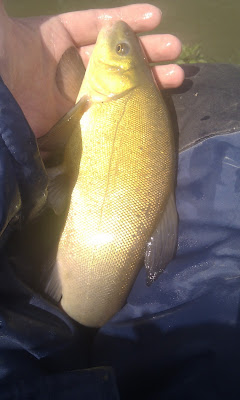 Unhooking the fish and returning it I noticed the tip of my feeder rod registering the steady pluck of a bite and on striking it connected with a nice F1 carp of around 2lb’s. I decided to up the ante after this fish, at least where feeder fishing was concerned and hair rigged on a 12mm halibut pellet and a thin slither of meat. Carefully dropping the feeder back into its previous spot I went about re casting my waggler rod where the F1’s were coming in at 1 a chuck. Double red maggot seemed to be the bait to beat with only a few fish falling to bread and nothing at all on corn.
I had just reached for my flask when the drag of my feeder reel came alive and line started flying off the spool.  Rod in hand I had connected with something big, and my feeder rod was soon getting one hell of a test! The fight must have lasted 5 minutes with 2 near net misses and a heart stopping moment when I thought the fish had pulled the hook!  When it finally broke the surface my heart was in my mouth and I only relaxed when the fish was firmly on the weigh sling on the bank. Taking off the weight of the wet sling the scales tipped at around 11½lb’s, a fish that I was very pleased with given the light tackle I was using (I realised after I landed it that I was using 6lb main line and not 8lb).
Dropping the feeder back in along the margin I cast the waggler back out with the faithful double red maggot and before long I was adding to my previous tally. I had caught over 50 F1 carp of various sizes, and they didn’t seem to be stopping.  Shallowing up to 3 feet I hoped I could pick out some more of the Rudd I had seen moving in the top layers of water. However as I found out this meant the F1’s had to wait less time for my bait to settle and began taking it on the drop. My feeder rod had also spurred back into life with another F1 of around 3lb’s. So far this day was turning out to be a cracker! And with an hour and a half left of my session I decided to really go at the little carp on the waggler, dropping the hair rigged pellet and meat combo back into the margin a bit further down the bank. I had lost count of how many fish I had caught, and was amazed at their pristine condition. 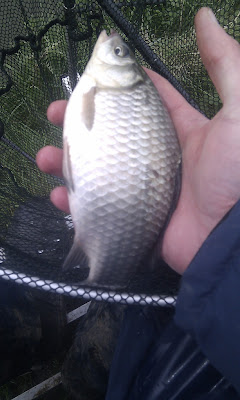 With 30 minutes left my feeder rod lurched around and I connected again with another fish. Although smaller than the “biggy” previously this was still a nice fish and when I got it to the net I saw a very chunky 6lb Mirror carp which had been gorging on the free offerings of luncheon meat I had been feeding.  I continued to fish for another half an hour solely using the waggler. Fishing 3 dead red maggots seems to pull in a better stamp of fish all ranging around the 10+ ounce mark, and after catching 3 “final fish” I decided to call it a day. What a belter! 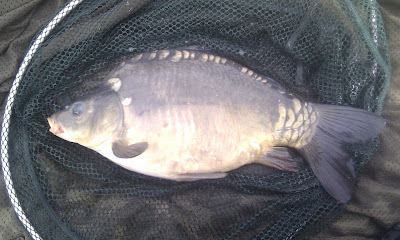 Having easily caught over 50lbs of fish in windy conditions I cannot recommend this little fishery highly enough. There were however a few small annoyances about the venue which, I think if remedied would make it into a cracking venue. These are; no toilets and no clearly defined pegs. Speaking to one angler, he described the summer months as a free-for-all in terms of space and where to fish which may leave the lake over fed and the fish a bit stressed. But today that was not the case. Other than that it is a great little fishery and one I would recommend to any angler looking for a busy days sport, my only other advice would be to get there early to get a better choice of pegs.
As a rating I would say: