Easter weekend had arrived and the weather was not living up to my expectations. My brother had arrived and I had promised to take get him out on the bank at least once while he visited. Although Yorkshire has a whole multitude of venues to choose from I wanted a reliable one where I knew fish were going to be caught no matter what the weather was going to throw at us. With that in mind we ventured out as soon as the torrential rain had stopped, packed the car and headed for None Go Bye Farm.

On arriving the weather looked like it could break at any moment and seeing that the First lake was very busy we made our way down to the bottom lake where I have caught fish before. I noticed some fairly extensive work had been done on the island of the lake and a lot of the previous plant life and more importantly features have all but vanished! So looking around it seemed like all the “best” pegs were taken. We decided to set up on the far bank away from the rod, I was going to be fishing the pole and Mathew had decided he was going to fish a small Banjo feeder for some of the Carp that I knew the lake contained.  I would be fishing 2 lines, one heavy using meat for the carp and one light, fishing using casters over maggots, for Rudd and Ide.
Starting with double maggot I shipped out not knowing if the recent ground work would cause the fishery any problems. However my fears were waylaid and first bite came exactly as expected. My float had not been cocked straight in the water for 10 seconds and it darted away. The first fish of the day was a small Rudd of a few ounces. It wasn’t long before I saw Mathew with the feeder rod in hand catching his first fish of the day too! 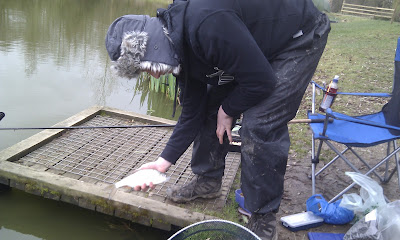 Non Go Bye is a reliable venue and I would recommend to anyone that it is worth a visit, but fishing is not without its harder days and although I caught steadily all day, I only saw 2 other anglers catch Carp, which was slightly frustrating as on my last visit to this lake they had been prolific along with the tinca’s! Still I was catching well and decided to double up fishing double caster on the hook. This proved an instant success with the stamp of fish being 2 – 3 ounces bigger than they had been on straight maggot. Feeling bold I shipped out my 2.5lb rig again with double caster and waited for another scale perfect Ide to find its way to my net. 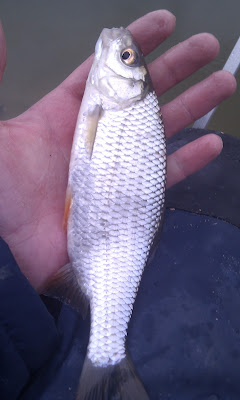 I am always weary of fishing a lighter set up on more commercial fisheries like this one and my next bite proved my worries well founded. The float disappeared and the number 8 elastic I was using stretched away, disappearing down into the water. This was no Ide, and the way the fish was fighting made me think that it didn’t know it was hooked! That was my fatal thought. An instant later there were 3 huge boils under the water as the fish powered away. The accelerated so fast that within seconds the elastic had bottomed out snapping my line. I was left sulking at the one that got away in front of my little brother! That was it, all bets were off. I was fishing next to the lilies until I caught a Carp to redeem myself. 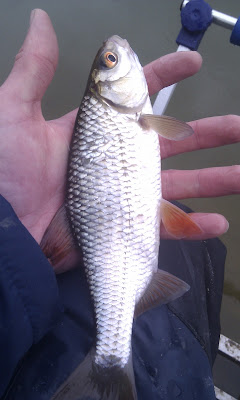 Unfortunately this redeeming Carp never came and the rest of the day was spent catching perfectly conditioned Ide up to around 1lb on every type of bait I could think of. It would seem however as though the disruption caused from the works on the island has left fishing the feeder or ledger more difficult than it has been previously been on this venue. Though it may have just been a poorer day for what is otherwise an excellent fishery. The next time I visit this complex I will be fishing the canal lake, this lake is the only I haven’t fished and is supposedly where you can take the highest weights. I hope that is the case then next time I pay this fantastic fishery a visit.
Share