My last visit to this venue was a disjointed one. Guy and I fished Woodstock initially with very little success, and then we moved over to the School Pond where we proceeded to catch a number of F1 carp in the space of a few hours. I wanted to return to the venue and complete a session on the one lake. Not being a member of Newport Angling Association meant I didn’t have a key for the secondary car park, so was in for a hefty walk to get to the School pond, which is behind Woodstock lake. This walk was made longer by the fact that there were at least 10 anglers all fishing in a row along the bank I had intended to fish! No matter, I trudged on and arrived at my newly chosen peg on the far bank, and would be the only angler on this bank for the day!

Today I would be chopping and changing between Waggler and Feeder fishing, depending on what was catching. Setting up both rods, I decided to fish the waggler first. I would be fishing a shallow margin swim to my right and 2 open water swims at 10 and 2 o’clock. Using a plummet to search for any features I found the lake was of a uniform depth of around 4 feet, but had a very silty bottom. With that in mind I chose to fish 6 inches under depth and hoped I would start picking off some F1’s. Casting out with double red maggot, I let the float settle, threw in 2 small handfuls of maggots and began the waiting game. The line bites were instant, and despite the recent change in temperature it was clear that there were a lot of fish up in the water, even if they weren’t feeding straight off the top. The float bobbed around for a few moments before kiting off to the right. Striking, and expecting a small F1 or Roach, I was very pleased to hook up with a sizable F1 Carp of over 2 ½lbs. It certainly gave my light waggler outfit an early test.
Keeping the swim alive, I threw out a handful of feed and some 6mm Halibut pellets for good measure. Then after quickly unhooking the fish and re-baiting I cast back out in the same location and was quickly into another F1 of a few ounces. After half an hour of constant action the bites slackened off, and despite still getting line bites the fish were now only coming in every few minutes. I changed the depth of my rig and cast back out. I had “shallowed up” another 8 inches, and was searching out the fish in my swim. The effect was instant, and again double red maggot was doing the business, but instead of catching F1’s it was silver fish. A perfect roach of a few ounces, followed by a constant stream of skimmers, all almost identical.
A few hours had past and the number of anglers who had been fishing on the 40’s bank had slowly decreased. I was now able to cast to the lily bed without causing any awkward crossed lines. As I would be aiming to fish incredibly close to the lily bed, I had no choice but to “clip up”. But my mainline and hooklength would be strong enough to hold anything this lake could throw at me. I would also be using a groundbait formulated for F1’s and laced with krill feed pellets, to try and tempt some of the bigger fish in the venue. The groundbait definitely delivered. Within 30 seconds of casting out the rod tip ripped around, I was into a hard fighting F1 of just over half a pound. These fish fight so hard despite their size. 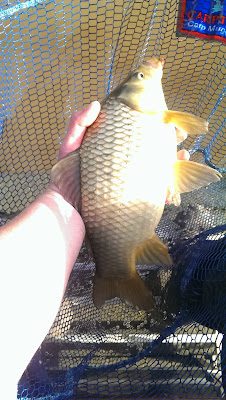 I caught 7 or 8 fish in quick succession and decided to up the ante. Banding on a red “Donkey Choker” (Thanks Steve Ringer for providing angling with such a brilliant description…) 11mm pellet, I cast out and waited. The bigger bait would hopefully put off some the smaller F1’s. When reaching for a sandwich, the rod ripped around (as is always the way) and for a second I thought the fish had wriggled free in the lilies. A few seconds later, I had managed to pull the fish out and was now playing it in open water. I brought to the net a lovely Carp of around 4lbs, and the biggest fish of the day. Recasting, I managed 2 slightly smaller F1’s around 2lb’s on the same bait. 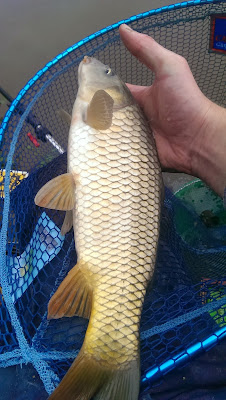 Still feeding my waggler swim, a large fish jumped straight out of the water exactly where I had been feeding, and with bites slowing down on the feeder I decided to see out the rest of the session on the Waggler. The feeding I had been doing had brought the fish right up in the water, and I would now be fishing no deeper than 18 inches. Fishing shallow, I began introducing medium pouchfuls of micro pellets. The number of pellets going into the water creates such a splash that it drives fish to the surface looking for food. I also swapped from double red maggot to a banded 6mm Halibut pellet.
This was quickly snatched away first by a lovely skimmer of just under a pound, and finally after several positive line bites, another F1 of around 2lb’s. I carried on fishing until I ran out of feed pellets, which meant I ended up driving home in the middle of the school rush! Still, this was a successful trip to a well run club water, which unsurprisingly features heavily on their winter match venue list. The walk back to the car was a long one, but on a fairly flat surface. The walk could also be a lot shorter if you join the club. The secondary car park is immediately behind the School Pond, and would make access a heck of a lot easier. The pegs are all very solid and well spaced around, what is obviously a busy, fish filled lake. This is the second time I have fished the School Pond and it certainly won’t be the last. Fishing open water on the waggler I easily had 30lb’s of fish, without counting any fish taken on the ledger. I can only imagine what I could have done if I fished within pole distance of the lilies. I will have to return to the venue on a quieter day and try it out!
As a rating I would say;
Fishability – ****
Accessability – *** – If you are not a member it is a fair stride to fish Morgans or The School pond
Value for money – **** ½ – £5 One of the most reasonable priced venues in South Wales. To my knowledge however there are no facilities, but there are plenty of suitably placed trees and bushes.
Disabled Access – ** ½ – The path around both lakes is fairly even, but may prove difficult for a lone wheel chair user. If you decided to become a member you can get a key which allows you to drive to the bailiff’s cabin on Woodstock or into the secondary car park where it is easier to access the back lakes.
Share