One of my friends recently asked me to take him fishing after a break away from the water side for more than 10 years. I was under strict instructions that he wanted to go somewhere with “a bit of nature”, a variety of species but preferably Roach, Rudd and Perch and most importantly “not a featureless carp puddle”. Thanks for making it easy for me Guy. After a quick search I had a shortlist ready, and after a brief discussion we chose Tredelerch Park or Lamby Lake. The lake is known for being a tough big carp water with 9 fish over 30lb and numerous 20’s, but after speaking to a relative who had fished it recently, the place was full of quality silver fish. Perfect, as this is what we would be targeting! Arriving at the lake and unpacking the car there was a hilarious moment when something fell out of his old rucksack that neither of us expected.

A few jokes later and we had found a suitable peg and began setting up. 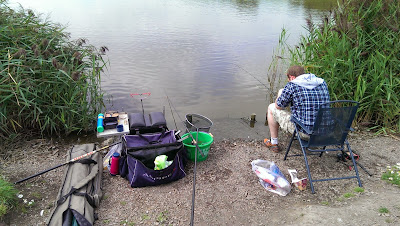 Today we would both be fishing the waggler and I’d been advised to fish over depth to counter the tow that the lake was known for. The lake plumbs up at around 5 ½ feet deep, but because of the tow I needed to fish around 7 feet with a heavy anchor shot down the line to prevent my float moving around. Baiting the swim with a hefty mix of Supercup and maggots, we set up our gear, cast out and began the waiting game! Unlike some of the venues I have fished recently, it was unusual not to have a bite within seconds of being in the water. A pouch full of loose fed maggots over the top of our float and Guy was in with the first fish of the day, a perch just over a few ounces. 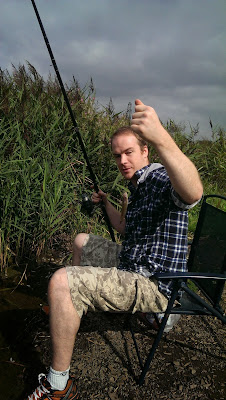 Despite catching the odd Perch and Roach I had a mare for the first hour of fishing. The fault lay entirely at my own door too. I had neglected my mainline, which had taken a bashing over recent weeks. Greys G-Tec line is great, but it does pick up a few nicks and kinks which severely affect its strength. After snapping once just below my shot and once just above my hook length, I stripped off 10 yards of line, re-rigged my set up and finally I was away. Casting out to around 3 rod lengths, the float cocked and with the aid of a pouch of maggots my float slowly slunk away and I was into another Perch. 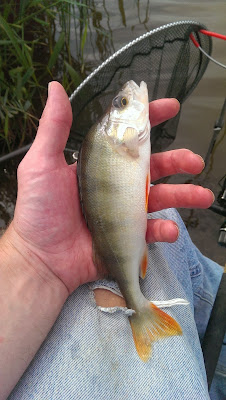 Consistent feeding meant that the bites were now constant, and depending where we cast dictated the type of fish we would get. Fishing directly over the groundbait and loose feed meant a steady stream of good quality Roach and Rudd (which would more often than not take on the drop). Casting just beyond the swim meant Perch, and in droves! I can only assume they were picking off the smaller feeding silver fish while the larger ones gorged themselves on our free offerings. 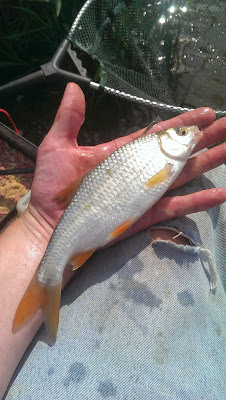 Half way through our session the wind dropped entirely, this really encouraged the Rudd in the lake to feed higher up in the water, as they were already feeding on the drop. Switching depths to around 3 feet quickly paid dividends as Guy struck into a nice Roach of well over half a pound. This was followed by a stream of fin perfect Roach and Rudd all around the half pound or over mark. The fish were feeding so confidently that before the wind picked back up the fish were taking straight from the surface. 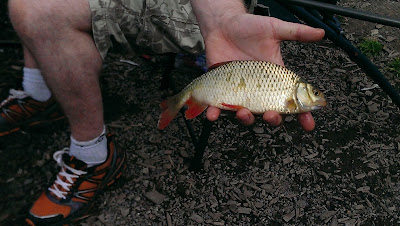 When the wind picked up again, Guy decided to go after the bigger perch in the lake using a maggot feeder. Casting out just beyond our feed area with a ball of maggots on the hook, he waited hoping for something more sizable. On striking he found that the Perch in the lake didn’t discriminate on how many maggots they ate in one go, with one of the smallest perch taking 5 maggots! 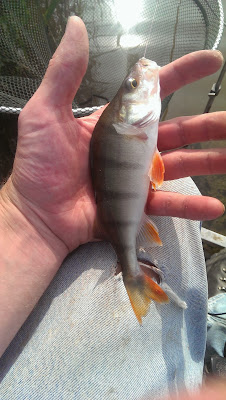 After a few more fish (all Perch, no bigger than the ones we were previously catching on the float), his spell on the feeder came to an end and he decided to see the rest of the day out on the waggler. I stayed with the waggler throughout, and ended up with roughly 15lbs of good quality silver fish. Lamby Lake is a well known Carp venue with several fish over 30lbs, but during the entire trip I didn’t hear a single bite alarm go off. After a bit more detective work I found out that the fish are quite cautious and don’t get caught that easily. This would explain why the Carp anglers around the lake looked like they were there for the long haul! The lake itself is set on a nature reserve in a rather unlikely location. That being said, it was bursting with wildlife. There was an enormous amount of bugs whizzing around the water’s edge and an incredible amount of bird life (including a visiting Cormorant which nearly killed off my swim entirely). With the amount of bait going into the lake from anglers, it wouldn’t be difficult to see this lake producing a few more specimen species over the coming years.
If you want a day of fishing a lake which isn’t a “featureless carp puddle” then definitely give Tredelerch Park a go. There are plenty of species to keep you entertained, the pegs are far enough apart that the disturbance from other anglers is minimal and you may even end up banking a PB.
As a rating I would say:
Fishability *** ½
Accessability **** (Open and easy access pegs for all)
Value for Money *** – £8 (Quite steep in my opinion for a day’s silver fish bashing, however £8 is nothing to pay if you get lucky and snag yourself a 30lb’er!)
Disabled Access **** (There is a car park very close to the lake, which joins a path that circles the lake, the surface is even and easily walkable, with almost all pegs having great access)
Share