This week’s episode of Fishing with Guy would leave me at a bit of a quandary. We had already visited Mathern Mill in the search of a “lump”, but I think Guy left that fishery slightly disappointed. After speaking with my father-in-law I decided on fishing Tri-Nant fishery near Llantrisant. I’ve been told that there is a good head of fish in the lakes and although there is a carp only lake, the mixed lakes also offer various other species which could prove to be good sport.

Fishing today was going to be a wet affair. The forecast was for torrential rain and thunder storms, but the question was when? Arriving at the venue/pub (The Countryman Inn) we were met by the owner who quickly filled us in on how the lakes were fishing. Apparently it wasn’t going to be as easy as I expected. We chose one of the mixed lakes and were quite pleased to see we were the only anglers on the water. It was also very useful to be able to park so close to the lake. This meant moving gear around was much easier, and anything that wasn’t being used could go back in the car, before it hammered down! The pegs were spacious and easily accessible concrete platforms, with room to position all your equipment close at hand (in drier conditions). I chose to fish the corner peg which offered 2 margins swims, an open water area and a fishy looking island swim at roughly 11 meters.
As usual and because of my faffing, Guy was casting his float out well before me and in no time he was calling me over to inspect his first fish. He looked very pleased, but for good reason. He had caught his first Barbel! Only a small one, but enough to put a smile on the big mans face. Guy was fishing just over a rod length out, a point I would remember later on this session. 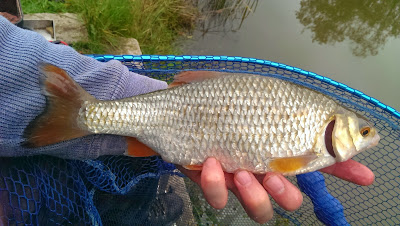 I returned to my peg and finished setting up. Fishing the Pole and setting your rigs up is a time consuming process, especially when you are desperately trying to cover everything that may get wet by the incoming rain storm. Soon enough I shipped out with “old faithful”, double red maggot, and began the waiting game. The bites were not instant, in fact 3 or 4 minutes went by before the float registered the pluck of a bite. A small handful of maggots over the top encouraged the feeding, and the float slipped away leaving me with a belter of a roach for the first fish of the day. Very impressed with the stamp of fish I shipped back out (to 5 meters) and after a few minutes and a handful more of feed the float submerged and gently striking I was into another sizable roach. A good bag of these and I would be laughing my head off! 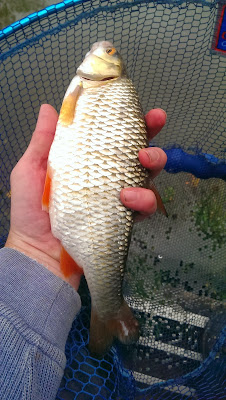 Returning the fish to the water and shipping back out the float buried and I was in again. This time it was more in line with what I was expecting initially, a small roach of a few ounces. I continued fishing at 5 meters for the best part of 2 hours, steadily amassing a good weight of silver fish and perch. Caster and Maggot resulted in the slightly better fish, but the wait between bites when using this bait also increased. At roughly 11.30am the rain started, drizzle at first, then gathering momentum it ranged between angry torrential rain (so heavy I couldn’t see my float), to a mild downpour, either way my waterproof’s were getting a thorough testing and frankly they were failing. Was that thunder I could hear…? 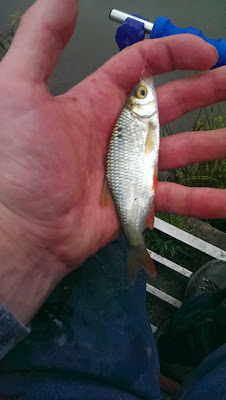 Rather than constantly shipping in and out making the wet patches even bigger by moving around I decided to switch to meat and fish at 11 meters. Hopefully sitting still would decrease the chances of my clothes getting wetter (I hoped). Fishing meat will usually tempt the Carp and Tench of the lake into playing, and after 10 minutes my float disappeared kiting left under the overhanging bushes. On striking I missed the fish, and cursing I shipped back in, using a smaller piece of meat to try and tempt the fish into taking. It became clear that there was a snag just off the island which every fish I caught knew about. 5 snapped rigs, half a tub of meat and quite a lot of swearing later I decided that some fish were best left uncaught. I decided to fish just as Guy had previously, just off the nearby margins on my right. Swapping top sections and changing my rig to a conventional Roach pattern I swung out my line and within a few moments I was into a small perch.
There must be a prolific number of perch in the lake because they were nonstop, taking anything and everything. Switching to double caster I hooked into something a bit more substantial, my 8 elastic shot from the top of my pole and I quickly gave Guy a shout for him to give me a hand netting the fish. After playing the fish for a few minutes it must have gotten tangled in my line because it floated to the surface about 8 meters out. It was a Tench and easily a PB. Puzzled I quickly tried to ship in before the fish had a second surge. My mistake. The fish turned, freeing itself from my rig and charged off, first directly in front of me then to my immediate left past the island. My elastic was bottoming out and after another 30 seconds, and a derisive laugh from Guy after I explained I was only using 2.5 lb line, the fish snapped my hooklength and was free. I swore, a lot.
Shortly after, I switched rigs to a slightly heavier pattern and chose a top section with a more weighty elastic in the hope of catching another lump from the margins, but that task fell to Guy. After 10 minutes of grieving about losing “that Tench” I heard a shout and saw Guy was into a fish. Shipping in I hurried over, landing net in hand and helped him net what was a beautiful common Carp of about 8lb. He was over the moon, and to be honest so was I. The fish had fallen to a worm hookbait and was followed by another mirror Carp around 3 – 4lb and a Chub hybrid of around 2lbs.
I continued to steadily catch Roach and Perch from my margin swim, but by mid afternoon we decided to call it a day because I was now wetter than the lake. Tri-Nant is a nice fishery, but I did find it unusual that only Meat, Maggots and Worm caught fish. I tried; bread, corn and pellets without so much as a bite! I would love to return to the fishery on dry day and fish the more established lake closest to the pub. We left feeling very pleased with ourselves, especially Guy having caught such a nice fish in dreadful conditions. The price to fish Tri-Nant is either £6 or £7 depending on what lake you want to fish, but I would definitely recommend the venue as it is easily accessible and has a fantastic head of quality roach, which will provide any level of angler with sport for hours.
As a rating I would say:
Fishability – *** ½ The lakes are established, but I think in a few years time when the grasses around the lake have really grown it will provide even better sport.
Accessibility – *** ½ My Sat Nav didn’t like finding this location, but with the help of Google we got there in the end, driving down the lanes of Beddau it was a fairly sharp left into the Countryman Inn Car park.
Value for Money – *** ½ £7 In line with many other fisheries in South Wales, the lake we fished had no facilities what so ever, although I suppose you could nip up to the pub if you needed too.
Disabled Access – **** I was able to drive down to the lake and park 15 feet from my peg, which meant moving gear and accessing the lake was incredibly easy.
Share