After my last trip to Dillington I left knowing that the lake had a lot more to offer, and perhaps a different tactic was required to catch a few Bream and Chub. One thing is for certain, the pump house peg has been producing some very sizable silver fish bags, and ever since Jamie Rich’s match win there has been a queue of anglers ready to fish the peg. On this occasion I arrived at the lake at 6am, only to see another angler already unpacked and lugging his equipment over to the peg! Good job I was heading to adjacent corner where I could have a bash using the feeder. I got to my chosen peg set up my box and trialled the above tree height for casting clearance. I would be fishing for Bream using (an allegedly proven Bream mix of) Sensas Bream and Brown crumb groundbait, with corn and casters, and alternating between chopped worm and caster on the hook.

It’s been a long time since I’ve fished the feeder, and for the first 15 minutes I was bit preoccupied making my rig “too technical”. This resulted in a tangle and meant I spent precious time fiddling with my rig than actually catching fish. After a quick rethink, I stripped rig bag to a running feeder on a helicopter bead with a 18 inch hooklength. I re-set the line clip, picked my spot and cast back out. It was one of those swims that was too far for an accurate under arm lob, but too close for a full overhead cast (without having an enormous splash every single cast). At least my casting after today’s session would be improved… Starting out with double caster, it wasn’t long before the rod tip twitched and I was into my first fish of the day – A Rudd of a few ounces. 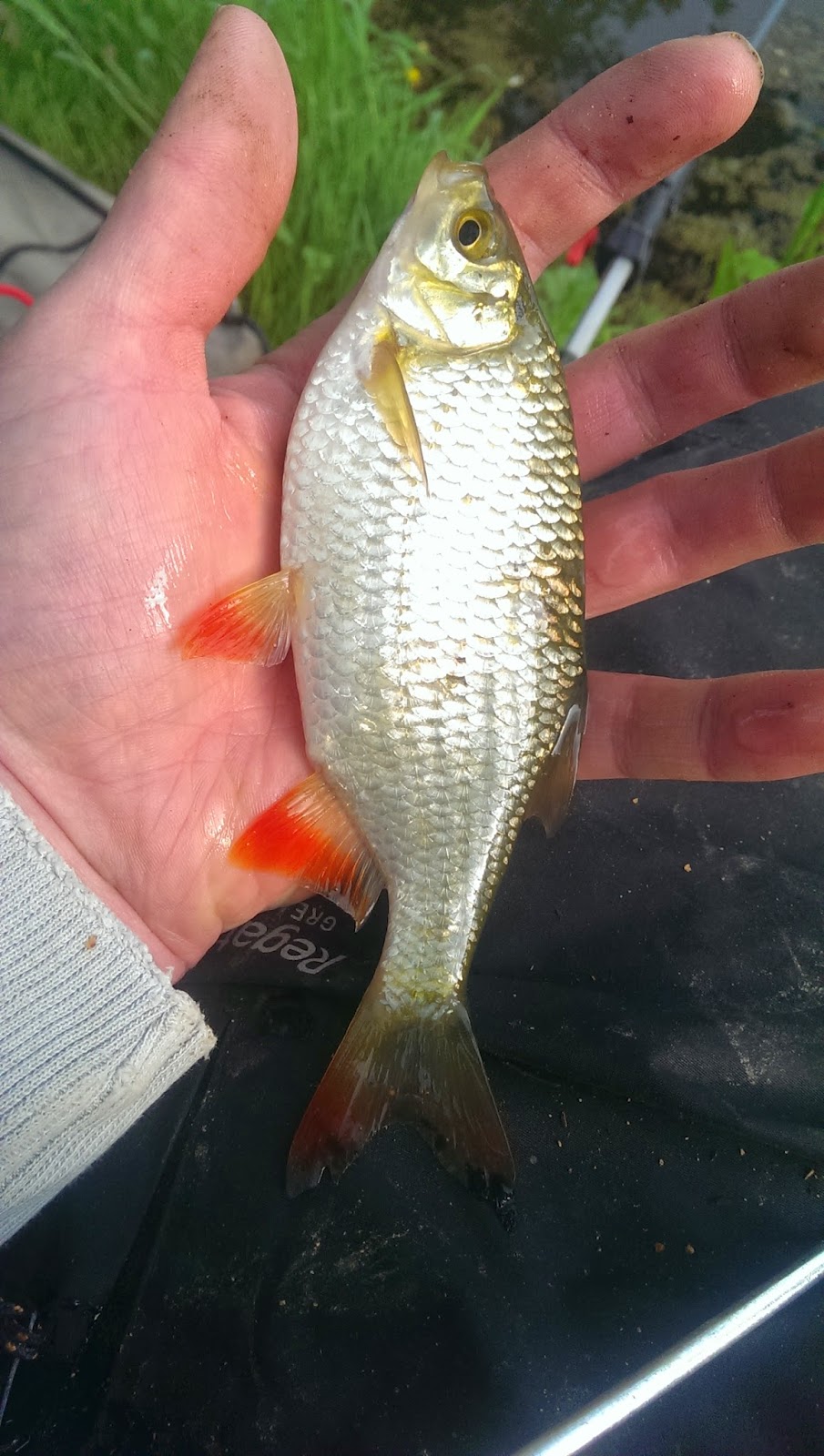 Switching to chopped worm, the Rudd was followed by a slightly bigger Rudd and then a nice roach. The fish were responding well to my groundbait, and I was having bites withing 30 seconds of my feeder touching down. Unfortunately The fish I was catching weren’t Bream! I switched to triple dead maggot, and despite the enormous bite, I wound in a small and very greedy Perch! I had also started to notice that if my rig was in the water for any longer than 2 minutes any time I retrieved my line, my entire rig would be covered in silt! With that in mind I set about trying to make my hookbait more neutrally buoyant. 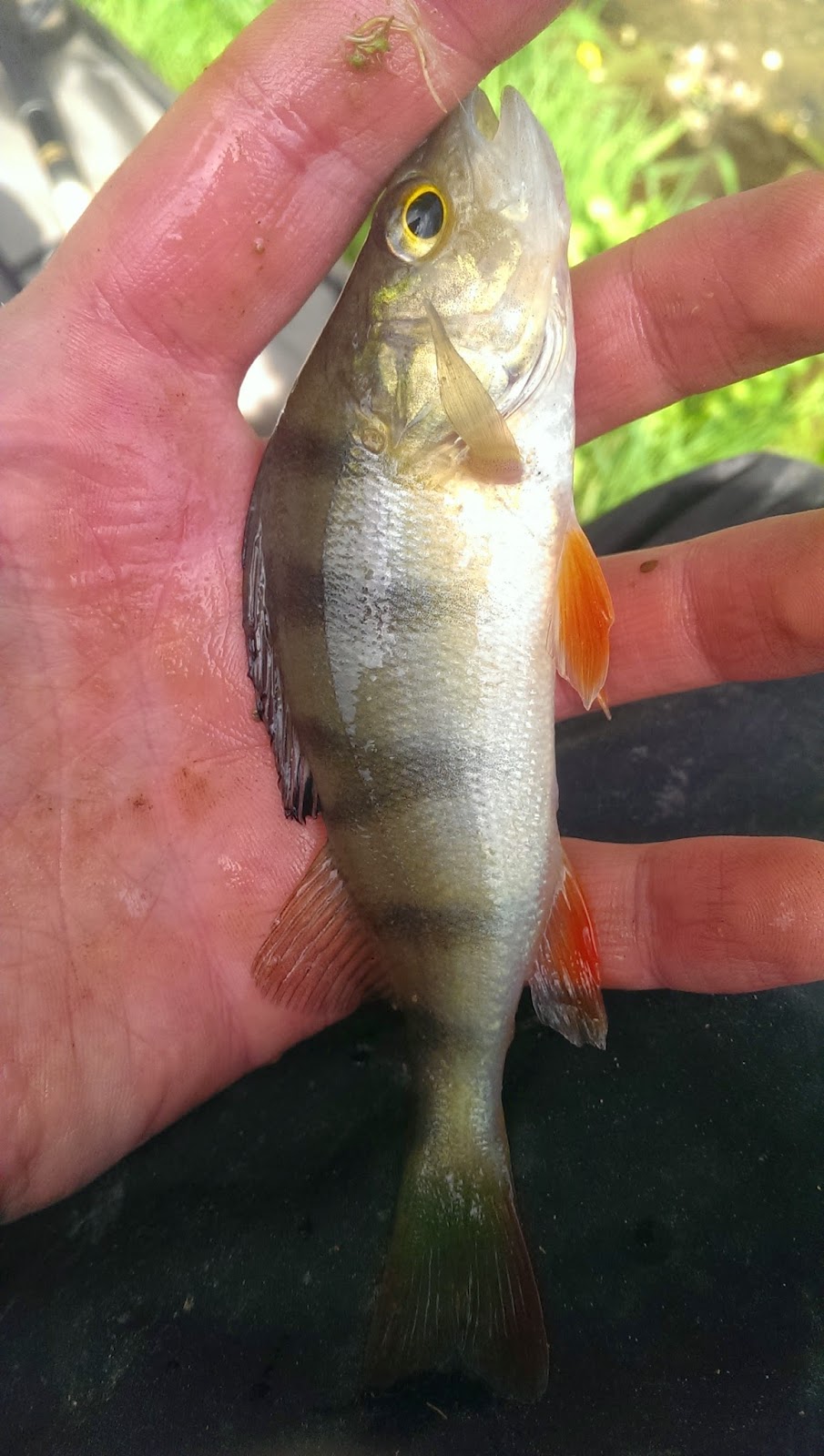 This really started to pay dividends and before long the stamp of fish I was catching really improved. Dillington produces really great bags of quality silver fish, and today was proving to be one of those days. I switched to an 8mm Halibut pellet as I’ve had bream on them in the past. After 5 minutes I’d not had a single bite! Switching back to chopped worm, tipped with a little piece of floating corn I cast out. I don’t think the rod hit the rest before it tore around, this was something more sizable and I thought “finally they’ve arrived”, the rod was showing the kicks of the fish and slowly I started bringing the fish towards the bank. When the fish was around 6 meters out it had a few more furious kicks and *ping* snapped the hooklength! I was gutted! Especially as that was my last wide gape size 16 hook (in that style)… Or so I thought. I examined the hooklength, there were clear signs that it had rubbed up against something sharp. I quickly whipped together another hooklength and looked through my box for a suitable replacement hook. I pulled the draw out and right at the back was 1 hook left in a loose packet I had completely forgotten about! It was a proper Hallelujah moment. I re-tied the hook link on fresh line and cast back out, waiting for another barnstorming run.
As a side note, this was a huge error on my part. I had pre-tied a few hooklinks, but nothing like the size or length that I needed on the day, which meant I had to resort to hurriedly tying hooklinks on the bank! School-boy error. The next bite that followed wasn’t a monstrous chub or a slab, but another lovely Rudd. This day was turning out to be action packed, but for the wrong species! I was alternating all my baits now, trailing, casters, worm, maggots, pellets and cocktail baits. All bar pellets got fish, I even tried a 10mm shellfish boilie that resulted in the best Rudd of the day! I stuck with a small Orange boilie for 3 fish, the last one being the days only Skimmer! 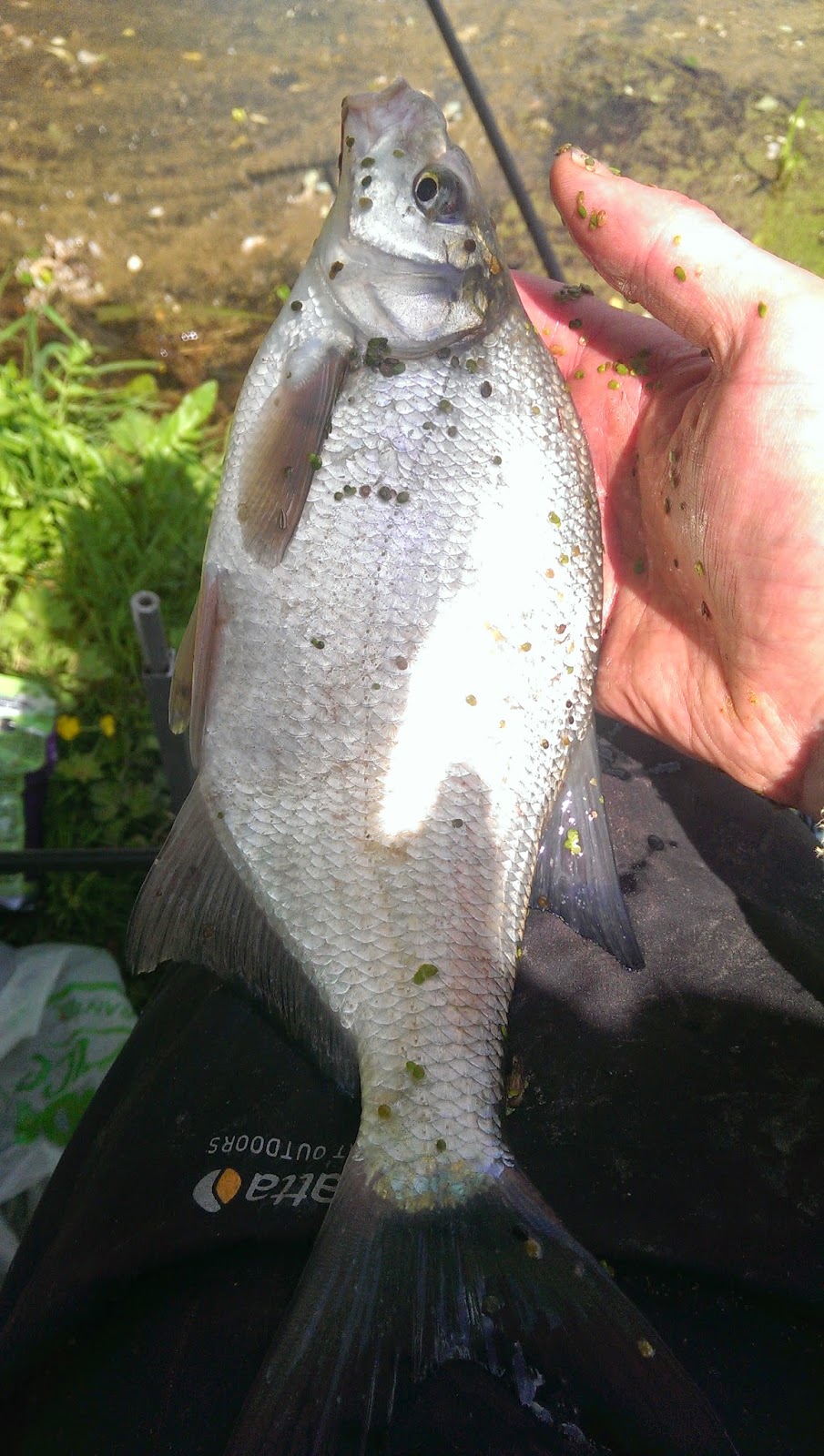 You could tell the fish had been rooting around in the silt as 80% of them came to the bank partially covered in the stuff! As bream are a school fish, I began thinking I may have finally hit to jackpot. Unfortunately a Roach followed it and then another Rudd!
I carried on fishing the feeder for the remainder of the day, but by the end of the session the surface scum I had experienced from my previous visit had moved back in, it was making netting fish a messy business. So after my early start I knocked it on the head at around 14:30, but was confident that I had caught a bag of silver fish well into double figures. Not bad for a feeder session! As I cleaned and packed my gear away I cast out a bunch of worms to try and tempt one of the lakes bigger Perch. A few minutes had past when the tip ripped around! Here we go! 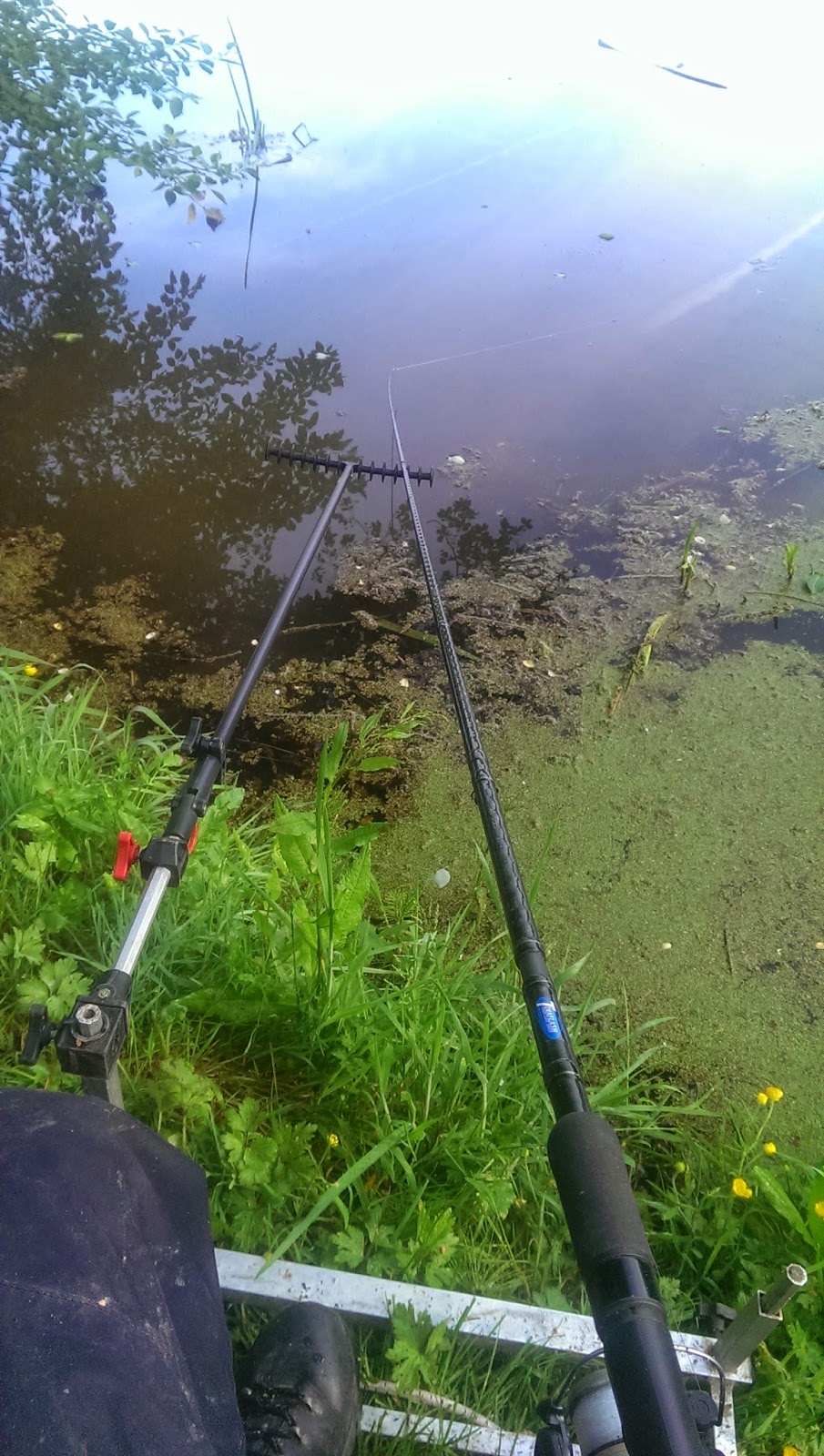 Winding in was a lot easier than I expected and found that the last fish of the day was a small Tench. A great way to finish the session.
Since fishing this venue I have learnt/remembered the following;
1. The peg I was on wasn’t the best Bream peg and I should have tried a different position.
2. I should have used an entirely different groundbait with more particles.
3. Use a more neutrally buoyant hookbait so it rests on top of the silt and doesn’t sink.
4. Use a shorter hooklength.
5. Keep the feeder rig simple.
6. Pre-tie a range of hook links which are readily available and easy to change over.
I can see myself spending a lot of time fishing Dillington to make sure I get it right. I am tempted to fish a match there, but until I’m reasonably confident that I can consistently complete with the regulars I’ll just bide my time and practice (rather than be pool’s fodder).
Share