The best way to utilise a day of is to go fishing, and that is exactly what I did (for a few hours). Today’s weather did not favour the fisherman, blowing a steady 15 mph and gusts of up to 35, the odd shower and a mixture of sunshine and heavy deep grey clouds meant it was going to be very difficult. After a morning of pottering around for waiting for the weather to calm I decided to go for a walk to both the Leeds-Liverpool Canal and the River Aire which are both a short walk from my home. I have fished the river very sporadically in the past and I know it is packed to the banks during the summer and autumn with minnows and gudgeon. Various Internet searches left very little to go on with some reports detailing big and wily Chub, potential Barbel and the occasional specimen Roach. Others complaining it was under stocked, over fished and horribly abused, yielding very little at best. 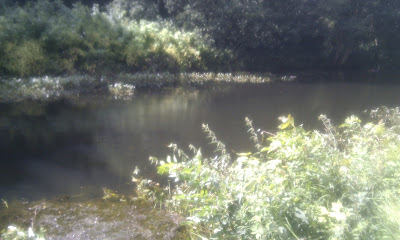 After arriving at the canal I immediately saw scores of fish moving in and out of the weeds on both the near and far banks. Walking 30 yards down the canal I glimpsed an enormous Tench sitting in the middle of the channel. Unfortunately this fish was rather unceremoniously disturbed by a large barge going straight over it. It was, alas, too windy to fish the canal, the high tree cover on both side of the canal meant it acted like a wind tunnel.
I moved on to inspect the River, there is a small path running along the side the fence of Fitness First on Redcote Lane, which leads to several pegs (some of which are heavily overgrown). On the open pegs, there are hundreds of fish fry “up in the water” in the margins. I decided to nip home and pick up both my waggler and feeder rods. I returned with my gear and resolved to use my feeder (once my preferred method) using white bread punch and Sensas Magic and dropped about half a dozen feeder-fulls near to an over-hanging tree on the left margin. The water was slow moving and about 4 foot deep, so I went for a short (12inch) hook length on 3lb low-diameter line with a size 18 Kamasan B611 hook. I cast out initially using double red. The rod wasn’t on the rest before I felt the faithful tap! Striking rather ambitiously I hook into a… minnow. I switch to a single red, 3 reds, bread and worms. Nothing can get through these pesky little buggers. 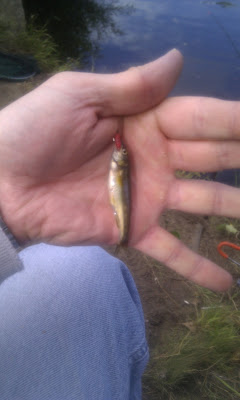 Annoyingly the river has been very badly treated over the years, every few fish and I would bring in a sunken bottle, bags and decaying branches. Further down the bank you can see someone has taken to haphazardly cutting down some trees and leaving them either; in the river itself, on the bank or leaving them balancing precariously on the branches of other trees. It was very disappointing to see. After literally 30 – 40 minnows I opted for the stick float method and plumbed up roughly 3 -4 rod lengths out at a depth of 4 ½ft. After balling in 4 generous handfuls of my elected ground bait I cast out using a single white maggot, the float dips under. Minnow! The river is full of them! Through trial and error using double white maggot and casting slightly beyond the channel I was originally fishing in resulted in a few small roach but that was the extent of my afternoon.
I threw the last of my punch crumb in, in an attempt to feed off the minnows and 2 swans appeared in my swim! They seemed adamant that they were not leaving. 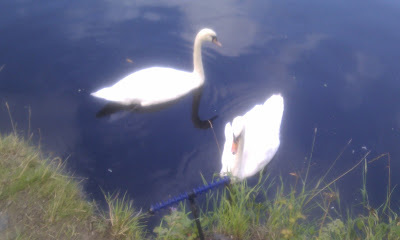 It’s very disappointing that such a visually appealing stretch of water does not produce any reasonable amount of fish. In my opinion a large river clean up is required, and maybe that will encourage more anglers to venture down to the banks. I will of course go back and fish there, but that won’t be until I know that there are better catches or that the Environment Agency has done something to improve the situation. Until then my visits to that river will be few and far between.
I would rate it;
Fishability * ½
Accessability **
Value for Money  *** (It is free, but it’s so difficult I’m still giving it a 3)
Share