After walking the canal the previous day for some jack pike I decided to try for some of the bigger Perch I had noticed. The previous day they seemed to be sheltering near the foundations of the bridges, so equipped with half a pint of red maggots, a pot of worms and a waggler rod set up I was away! One of the benefits of fishing with very limited amounts of tackle meant that I could walk up and down the canal to locate the fish, rather than waiting for them to come to me. 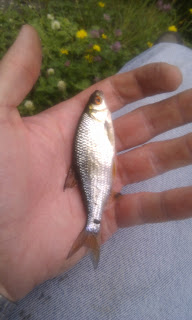 I set up initially at the Kirkstall marina and fed a few small handfuls of maggots and set the float to about 4ft. After about 10 minutes the float slipped under, it was a nice roach of about 4ozs, but it wasn’t the targeted species. I fished at this location for another 30 minutes and caught 4 or 5 more roach. I was very easy to shift location; so I decided to move to a wider section of the canal just beyond the marina, walking towards Leeds city centre in search of those elusive perch. There were several roach moving very close to the near side bank which I couldn’t resist trying to catch. My hook bait was dropped into the water along with a handful of free offerings and my float dipped under. It was a very timid bite, but it resulted in a fish of about 6ozs. But, I was after Perch, and I’d yet to catch one so another move was on the cards. 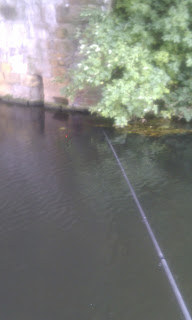 A short walk along the path the canal narrowed as a bridge went overhead. There was less weed around there and you could see the bottom of the canal a lot more clearly. It was also happened to be where I spotted some of the larger Perch the previous day. I flung in a few red maggots and saw some fish pick them off at about half depth. A small underarm flick landed me very close to the opposite banking and it wasn’t long before I landed a small roach, this was followed by… A PERCH! Switching to worm meant another and another. On my next cast I decided to fish very close to the near bank and was very surprised how quickly I connected with a fish, again a perch. This happened another 2 or 3 times, the bank must have been undercut slightly as the fish could be seen darting out from under the near side bank to attack my maggots. 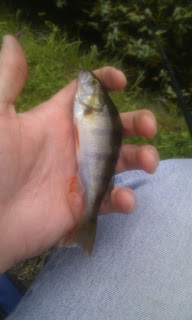 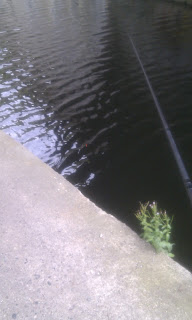 I walked back towards my original location after several more fish, but unfortunately saw no sizable perch, although I sat down and caught a few more roach.  Despite my best efforts I didn’t manage to catch a perch of any great size. For future outings, on the advice of an angling friend of mine I might use flavoured maggots (Madras flavour) in the hope for something a bit bigger. Still it was an enjoyable afternoon walking up and down the canal, I’ll certainly be visiting it’s banks again shortly and will hopefully get a specimen Perch (or Roach, I’m not fussy!)