I normally start with where I’d planned to go fishing or which tackle shop I had recently stepped foot in but this week it’s a bit of a different post to my usual blogs. There is a great project which is taking place along the south west coast which I thought would be interesting to share. 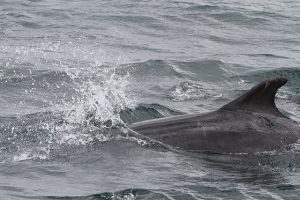 Local Charity MARINElife, based in Bridport West Dorset, has launched the 1st Big Bottlenose Dolphin Survey, this Crowd funder project aims to help secure the future for this protected species and the globally endangered Balearic Shearwater in the south west of the UK.
For those of you who don’t know, the UK is home to some of the marine environments most iconic species, including the Bottlenose Dolphin and the critically endangered Balearic Shearwater. For those of you who are interested… keep reading. MARINElife are on their way to achieving the £6,000 target, which is what is needed for this first of its kind survey along the south west coast. This unique project aims to help safeguard these animals’ future. 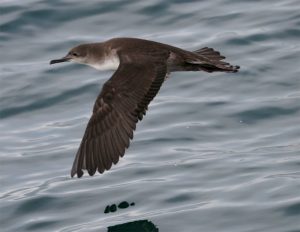 On 18th  August 2015 dozens of MARINElife volunteers aboard 9 charter boats, along with many more volunteers strategically based on various cliff tops will complete the region’s largest survey for Bottlenose Dolphins and the globally endangered seabird, the Balearic Shearwater. This monumental survey stretches from Portland in Dorset to Cornwall and around to Lundy Island in North Devon.
This project is really exciting and could prove vital in understanding how many Bottlenose Dolphins actually live in the waters around the South West. Dr. Rachel Davies MARINElife’s Conservation Research Manager told me that “MARINElife has shown that the south west has a nationally important population of Bottlenose Dolphins, by photographing, identifying and cataloguing over 100 different animals in the area over the last few years, but only a limited area has thus far been covered looking for this mobile species”. 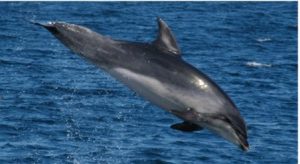 Obviously a lot more effort is needed Dolphin spotting!
The purpose of completing this survey in one day is so it enables MARINElife to get a real understanding of their numbers and distribution over the whole of the south west and will help them work more effectively in trying to monitor and protect this population.
In 2015, the coastal west Channel was designated as a new management unit for these Bottlenose which will ensure the dolphins in this area will be considered as a separate population from other populations in the UK.

The survey also targets Britain’s only globally critically endangered seabird, the Balearic Shearwater. There are only a few thousand breeding pairs of these birds in the world and each summer, many migrate from the Balearic Islands in the Mediterranean, where they breed, up the west coast of France, crossing the Channel before working their way around the south west coast. They rely on the rich feeding in our coastal waters. The south west coast offers a critically important habitat on a busy part of their annual migration.
The RSPB are also assisting with this milestone survey. Tony Whitehead, speaking for the RSPB in the South West said; “The RSPB are delighted to support this campaign. The information collected, including by RSPB staff and volunteers on 18 August will help us find out so much more about the population of Balearic shearwaters that use UK waters, especially in summer. This is the UK’s only globally critically endangered bird and it’s vital we learn about its habits, migrations and the places it favours so that we can afford the species proper protection”. 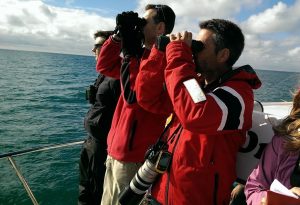 The first boat will launch from Portland in Dorset carrying up to 12 surveyors with the remaining 8 boats launching from various ports along the coast. The survey will extend up to Ilfracombe in North Devon and include Lundy Island in the Bristol Channel. Volunteer surveyors with binoculars and spotting scopes will also be monitoring the coastline from cliff tops at strategic sites around the south west. It’s a huge operation!
If you are at interested in helping MARINElife complete this fantastic survey then visit www.crowdfunder.co.uk/marinelife for more details on what the survey aims to achieve, and how YOU can play your part.
There are also great rewards for pledges, from joining a training course to learning how to identify whales, dolphin and seabird species in UK waters, to places on board the boats looking for dolphins on the day!
There are only a few days left with the funding drive, as it closes on Friday 31st!
A bit about MARINElife:
MARINElife is a charity which was established to co-ordinate and to develop a growing portfolio of whale, dolphin and seabird research and monitoring projects. Through scientific investigation and education we aim to further the conservation of the wildlife of our coasts and seas. The core work of MARINElife since 1995 has been in researching the distribution, abundance and population trends for whales, dolphins and seabirds from commercial vessels in the Channel, Bay of Biscay, North Sea, Irish Sea and beyond. Volunteers play a crucial role in helping collect scientific data on the current status of such animals. This in turn helps MARINElife to recommend how to best conserve their populations to policy makers.
(From the MARINElife website: www.marine-life.org.uk)
Share