This weekend I managed to find a couple of hours during naptime, so I headed out with my reels, rods and balls, and strolled to the field. My setup is reel down, I’m not entirely sure why, but I prefer this set up, it just feel more comfortable. I would start using the Daiwa’s and move onto the Abu’s once I had achieved a “birdie”. 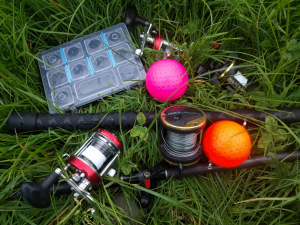 Standing with my feet in the 12 and 2 position – I was using a 5 foot drop placing the lead roughly at a 20 degree angle from the rod blank.

Here’s a very ropey video of me giving it a whirl.

These casts were ok, but I still felt and though I was coming through too much with the right arm, rather than pulling down with the left. The best cast came in at what I would guess was 80+ yards. I suppose that’d be a standard good cast for me, but there was nearly half a field which needs to be conquered.

The rain had started and this stuff was a fine mist, making gripping the spool quiet difficult when releasing the cast, even in an off the ground cast. After about 20 casts I got my first birdie. I think it was because I tried to speed up the process to give it more power. I swapped to the other Daiwa and carried on, it was quickly clear that roughly guessing the length of a shockleader should not be attempt and what I had put on the reel was much too short.

Nevermind! Swap to the Abu. 3rd issue of the day. The diameter of the coaster is perfect for the Daiwa’s as the have a graphite reel seat which is quite chunky. The Abu’s however have a metal footplate which is narrower and shallower and was unable to sit properly on the rod! Bums! No matter I thought – I’ll fill the gap with electrical tape! Nope. I put the tape back in the shed when I placed the balls in the rucksack. Bugger! Nevermind, 25 or so casts is better than no casts, and the rain was making gripping the spool difficult. So I unclipped the ball, released the reel clutch, broke the rod down and headed for home!