Good news for all Anglers for who fish the River Aire in Leeds, Keighley and Bradford.

Over the next few years there should be in increase in catching Barbel as 3000 of the little beauties were released by the Environment Agency at various points along this river just over a week ago. This follows on from a consistent fish stocking programme the EA has undertaken in recent years around this time of year. Releasing fish into colder water is more beneficial as they can travel further in the highly oxygenated water. Tweeting about the release, Environment Agency officer Pete Turner told me that the fish were released “at Kildwick, Bingley, Hirst Wood, Apperley Bridge, Armley and Thwaite Mills. 500 at each site.”

For those of you who are Barbel catchers, the average growth rate of Barbel in the UK’s rivers in 2009 is shown by this graph produced by Pete Reading; 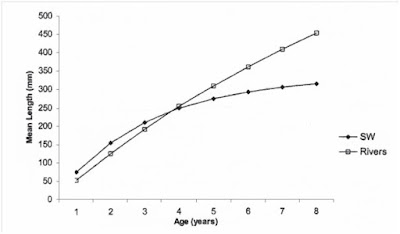 Pete Reading 2007, Stillwater Barbel – Facts, figures and theories.
Let us hope that steady increase in size of small Barbel will pay dividends and catch rates on the river will improve over the next few years. There is also the possibility that other species of fish will be released into the river as hinted at by the Environment Agency website.
I will hopefully be meeting with Pete Turner over the next few weeks to discuss in greater detail my previous blog post ‘Time for a Clean-up’ and will be posting the outcome of this in the not too distant future. For now though, we must content ourselves with the knowledge that a healthy head of small Barbel have been introduced into the river and they have the winter to grow before we attempt to catch them!
The full Environment Agency article can be viewed here: North East Newsletter
Share