How did I find this location? Google Maps! I’ve only walked the canal a few times, but anyone with eyes can see, despite the odd chair, television, traffic cone and bike, that the canal is full of life.
There are lots of fish whizzing about if you stand there and have a look. When I first investigated the swim I spoke to a local angler who was using bread and the 1lb+ roach in his net seemed to suggest he knew what he was talking about, although it was easy to see from the clarity of the water that fishing now would not be an easy thing. This coupled with the seemingly monstrous weed growth close to each bank meant it may be a trip fraught with tangles and weed. 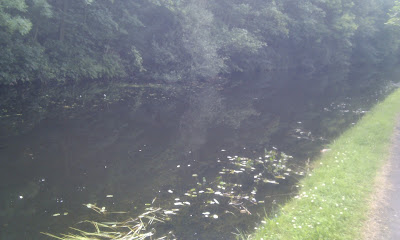 I decided, having never fished that section or peg before to side with the steadfast maggot (I’d also forgotten to bring bread). So I set up my gear and a fairly fine pole rig, plumbing up roughly 4 inches from the bottom (which is also quite weedy) and about 6 inches below the dredged shelf. In an ideal world I would have taken time to cut out the weed from the peg I was about to fish (as has been done intermittently along that section with various degrees of success). Alas I had no means too and the day was getting on a bit. 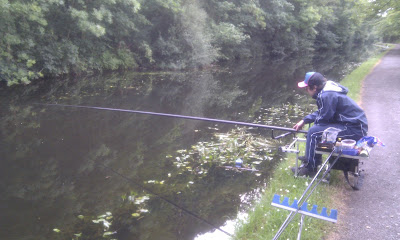 Fishing at a length of 7.5m using double maggot produced all the fish, all of which were perch, every single one of them fell to double red maggots as well, the best reaching about 7 – 8 ounces. Adding another section and reaching about 9 meters meant fishing directly onto the upper shelf, and, when the clouds broke the reflection on the water meant I could actually see my bait, so I went back to fishing at 7.5m. It was an odd venue to fish. In my experience, bigger perch usually fall to worm, however when I tried it out I didn’t have the slightest indication of a bite, switching back to double red. I caught fish straight away, which left me slightly perplexed, and made me think would the result be any different had I remembered bread. Below are some of the Perch I caught, before I put them back, I don’t know why I decided to take a photo after releasing most of my catch… 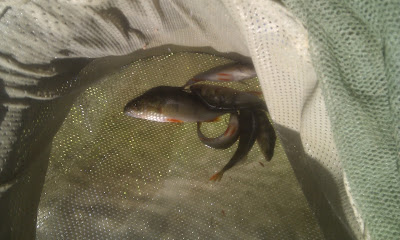 As a fishing session it was enjoyable and I’ll certainly go again to try to “suss” out how to catch one of the large roach I saw the angler next to me have in his net. But until then I’ll make do going through the perch.
Fishability ** ½
Accessability*** ½ (However, there is very little parking)
Value for Money ***** (Free)

For directions on how to get to this location please click here!