I’ve been home recently and when I was there I thought it would be a good idea to try and catch a few of the River Taff’s plentiful Trout and Grayling.

Arriving at the river bank after buying our tickets from Garry Evans Tackle Store we found an angler standing in the middle of the river, Spey casting for salmon. We took this as a good sign and although salmon were not our intended target we gathered our equipment together, slung on the chest waders and made our way to the river bank. 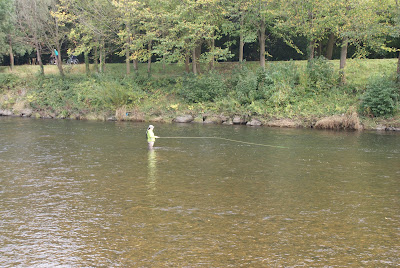 My father and I were fly fishing and my brother was using the less conventional pellet waggler, adapted for river fishing…

(It doesn’t seem so uncommon after reading this month’s issue of Improve your Coarse Fishing). Using a goldhead caddice pattern for the point fly and a small shrimp imitation as a dropper, I waded out and began to methodically cast across the river covering as much water as possible. I was at the top of our stretch and I could see about 100 yards downstream that my dad and brother were just starting to fish themselves.

On my first cast I felt the recognisable tap of a timid bite and thought that this was a sign of things to come. But the 10 minutes that followed resulted in no bites whatsoever. I decided to change flies when my father caught his first small grayling. He caught another by the time I’d changed flies for a second time. With no luck so far I thought it was time for me to change swims. Getting up out of the river I walked up the bank, I was so focused during my earlier fish-less session I had not noticed my brother and father had also made their way up the river and walked on to the bank of the same section.

My brother Mathew was stood in front of a slow moving pool trotting his float down the river into the swirls. I heard a shout and saw that his waggler rod was showing a significant curve! Quickly abandoning my gear on the bank and walking into the river to inspect his catch he turned and gave me the “it’s 1 – 0 to me look”. It was not difficult to see it was a sizable fish, a stunning Grayling easily over 2 ½lb. Lowering his net into the water to scoop up the fish it gave one final kick of its tail and… threw the hook. Disaster! 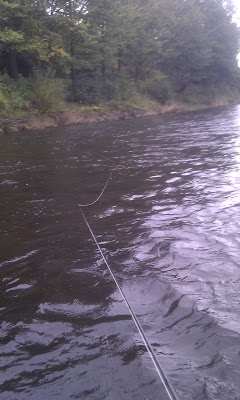 While this was going on, my Dad had managed to land a few more small grayling as well as dropping a few after the initial take. We continued fishing the crystal clear waters for another half an hour and although I didn’t catch anything I did see a mink pop up to the surface with a roach in its mouth. It continued to eat it on the opposite bank, stroll back down to the water’s edge and plop back into the weir pool. It was then we decided to make a move to our second location. I couldn’t help feeling that if I had brought some of my coarse gear there would have been a few chub involved, as I know that this section of the river is full of them.

The day ticket we had bought meant we could fish on the Glamorgan Anglers stretches of the river. I’d fished this stretch previously and hammered the small grayling on a small (size 18) dry fly and 2 ½lb trace and hopefully today would be a repeat of the same. Wading into the river the weed rafts were in full bloom. Having friends who fish this stretch regularly I know there are plenty of barbel and chub and I couldn’t help longing for my waggler of feeder rods. With a red tag as a dropper and a black gold head as a point fly. I began to cover the water casting first from the right into the middle of the river, and then from the left and into the middle. 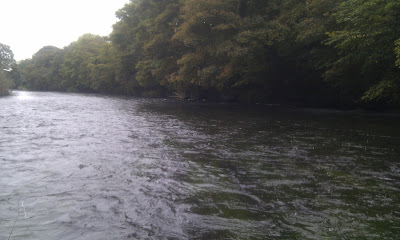 5 minutes of waiting and there was definite tap felt through the rod and line. Covering the same section of water I hoped to connect with a fish, however I was left disappointed. The river was racing past and I felt confident that a feeder rod would have resulted in some sizable fish. I heard my brother calling me; my dad had just swung in a small salmon parr. 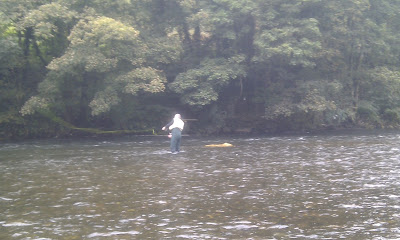 This was quickly followed by another small grayling which was taken on a dark gold head pattern. We fished for another hour or so covering 250 yards of river. Not another bite. Switching from goldhead to nymph, from shrimp imitation to red tag, nothing seemed to catch despite watching the fish being caught around me. Leaving the river and walking up towards the salmon ladder we began a conversation with a gentleman who informed us that a lot of salmon and sea trout had been running up the river, which is very encouraging as there had previously been disgruntled rumours that the building of the Cardiff Bay Barrage had prevented the salmon from being able to return to their spawning grounds on the Taff. 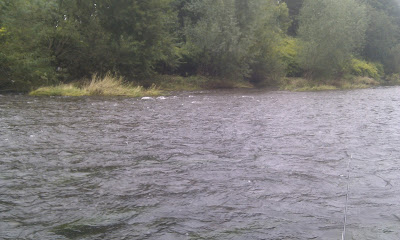 It was a very enjoyable afternoons fishing, and next time I may be holding a float rod rather than a fly rod as there are plenty of good fish to be caught for all types of anglers. Not only is it an excellent place to fish (despite not catching. I have caught plenty of fish on the river before) but it is very picturesque, and whether your chosen method is fly, the stick float or feeder, the location alone is enough to make you back and give it one more go!