This weekend was going to be spent the other side of the bridge after my wife and I decided (rather last minutely) to go home and visit our parents. This also meant that a fishing double was on the cards. My Dad is a keen river angler but like me will target anything that swims, so persuading him to get on the river should be a fairly easy job, and if those fish weren’t playing ball I knew a venue which always produces on the fly this time of year, come rain, wind or shine.

Part 1 – River Taff
It wasn’t an overly early start in comparison to some other fishing trips I have I had with my Dad but we were up and out of the house just after 8 which meant plenty of time for a McDonalds breakfast…WIN!

We would start out fishing for Trout and Grayling on a stretch of the Taff which is heavily frequented by dog walkers, so a fair way to get out of what I considered the “Dog Zone” was required. The river seemed to be running lower than my dad anticipated and quite clear, so I opted for a Black nymph goldhead for the point (end) fly, a Pink Shrimp imitation on the middle dropper and emerging Red Tag on the top dropper. To cut a short story even shorter we covered a good stretch of water without so much as a bite or even seeing a fish rising! Very frustrating, especially as the water looked very fishy. We fished for just over an hour and a half without so much as a bite, but then resolved to give another river closer to home a try and see if it would produce the goods.
Part 2 – River Rumney
I use to fish this river very regularly when I was younger and it once hosted the UK Grayling Championships, but sadly it seems as though the days of well maintained banks and several access points are long gone. The foliage has claimed all open areas and has overgrown much of the river bank itself. There is now only 1 exit and entry point on that stretch of river. A very sad state of affairs when I think about the venue 10 years ago. Still we were here and we both knew the river had a very healthy head of Grayling and Trout. I swapped my point fly to something slightly heavier to try and target some of the rivers “Ladies” but I was more than happy to catch one of the resident trout too.
I took the lead and waded down the river, fishing with my back to the left hand bank casting a short line up the river and letting it flow down waiting for a take. After 30 yards I heard “Yep!” and turned to see my Dad playing a Trout. It turned out to be a nice fish up over 1lb and so it became 1 – 0 to the old man. 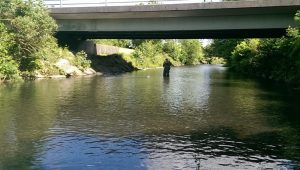 I saw a fish rise in front of me as instantly cast to it, within seconds I felt what I can only describe as the “jolt”. It felt like a jolt of electricity going up my arm! I struck and missed it! I was gutted, especially as I saw the end of the swim in sight. This trip needed to produce or I was going to leave going into the final venue on the back foot! Sadly no fish materialised and I ended up climbing up the bank to get out of the river. 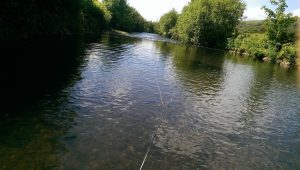 There was one stretch of river about 150 yards down the bank which we tried but after 20 minutes nothing was obliging so we decided to up sticks and head to the 3rd and final venue. After roughly 3 hours (split between 2 venues) we had 1 fish between us. This venue had to produce so I could get back on an even keel.
Part 3 – Riverside Coarse Fishery
We are arrived at Riverside paid the was a very reasonable cost of £6 and changed tact switching to a 6ft length of 7lb Guru N-Gauge with a rubber dog biscuit on a Invisi-Stop Hair Rig.
Before we even got out of the car I could see the silhouettes on the surface, and so could my Dad. “What are we doing in the car?” we the question Dad asked. I got out, switched leaders and began casting. Before long we were casting to the slurping mouths of the lakes resident Carp. After 5 minutes and one premature strike I was into a fish and so was Dad. A great start. 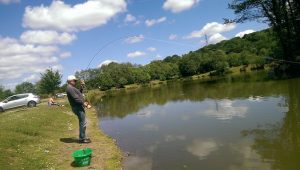 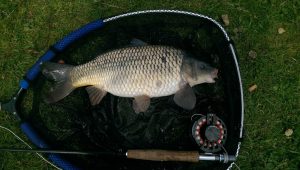 We had another 2 hours or so to fish so we wanted to make them as productive as possible. I have fished riverside numerous times in the past and the one thing this has taught me is – “When the fish are there DO NOT let up on the feed”. With that in mind I returned my fish and grabbed the catapult, firing out 2 pouches of chum mixers. Unlike normal carp fishing when fishing for carp on the fly very rarely will you get a fish which goes off on a run. These fish eye the bait before taking it, and so will quite happily reject it if something is not right. Also as it is unlikely that there is a scent to your fly (or as I was using rubber dog biscuit) everything has to be spot on to encourage the fish to take. I have found that my best results have come when watching the fish take the bait and then firmly striking before the fish has chance to eject the hook (or go off on a run). Think style of striking while watching the fish means that you generally get a very high hooked/landed ratio.
It wasn’t long before I was in to another fish, while my dad very narrowly missed one. Playing these fish on the fly is unlike any style of course fishing and is so reactive it constantly keep you on your toes. 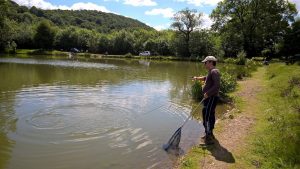 An hour had gone and of the fish we had caught, it was a safe bet to say they were full of spawn/in the process of spawning. Some of the fish although taking some biscuits obviously had their minds elsewhere and were lazily swimming under our lines, showing very little interest in the offered bait. We carried on for another hour in which I banked another 3 and Dad managed 1, but I think that these fish will be pretty quiet for the next fortnight or so until they have precluded their annual love making session… At 1pm we both decided to call a day as we both had busy afternoons planned (and I had a 2 hour drive). 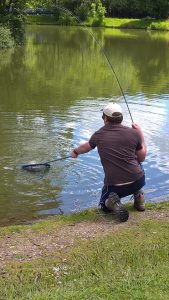 To be honest I could have done with a sit down, it had been a busy morning.
I have fished Riverside so many times (and reviewed it) but this venue never disappoints whatever method you choose. I’m looking forward to my trip home in just over a month to hopefully try it out again with more members of the Murphy family. However between now and then I have to plan another course fishing trip, a sea fishing venue (the old man is visiting next weekend) a river trip and a trip on to one of the local drains, so all in all very couple of weekends, until then! Tight lines.
For existing reviews please click here.
Share