Although I have caught pike previously on Llangorse in Brecon, on that occasion I was with a pike catching veteran and using lure tactics which I was at least slightly familiar with. I have never really used dead baits to fish for pike although most of the piking world and some of my friends who regularly fish for pike (one recently catching a 27lb monster from Chew Valley Lake) swear by them. So being continuously told that the pike in the Leeds – Liverpool canal ranged from tiny to massive and were to be caught in plentiful numbers I had a few hours spare on a recent weekend afternoon and thought it about time that I set out in search of one these veracious hunters. 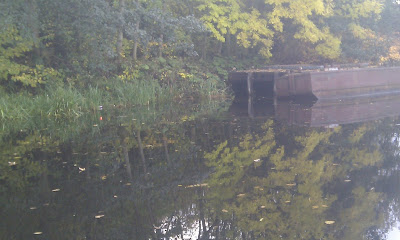 Now any suggestions on how to present dead baits will be welcome (as I am open to opinion, just comment below), however this time I opted for a smelt hookbait and a fixed length deadbait float rig of around 3 feet. This was long enough to get down to around ¾ depth, but shallow enough to allow the light current to tug the fish down the canal doing the work for me. On my walk along the canal bank I came across several anglers all fishing for my intended quarry and one of them showed me a photo of a fish roughly 15 – 18lbs caught from the very spot that he fished that day, but as yet nothing had been caught. Choosing a location near a sunken barge that looked particularly fishy I cast out. My first cast using a deadbait, I sat down and began the waiting game. The water was doing its job and after 20 – 30 minutes and several runs through the same stretch of water I had not had a bite, looking around and still seeing several anglers maybe this was an overly fished section… With this in mind I packed up my gear and walked along bank to a throng of reeds growing out from the opposite bank.

Repositioning my chair and casting out as close as possible to the reeds I sat and waited. This time, the float bobbed three times, and on the third it ducked completely under the water. In my excitement I struck, felt the slightest bit of resistance followed but nothing and wound in. My smelt had clearly been nibbled but that was all. I have since been told that when dead baiting for pike you are meant to fish with an open bail arm to allow the fish to take some line without feeling much resistance. 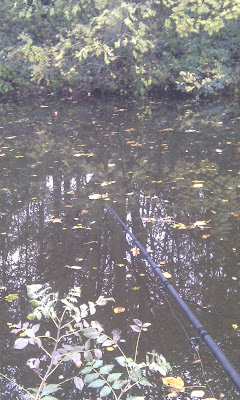 I recast to a very similar position and began to wait again. Unfortunately I think I spooked whatever fish there were in my swim with the excitement of my strike and despite another wait of 45 minutes I didn’t get another bite. Moving further down the canal and continuing to fish for another 30 – 40 minutes again resulted in no bites, but the thrill of the previous bite and watching the float duck under had not abated. I decided to call it a day at this point as I had only a few hours to spare but I will certainly be revisiting the canal to try and wrestle out a predatory monster (but I will also settle for something smaller). One thing is for certain, I need to research alternative dead bait fishing methods to maximise my chances of catching one (obviously any suggestions are more than welcome). As the canal is only a short walk away, I will reserve my “Fishability” rating until I have become more learned in the ways of catching the crafty Pike!