After being incredibly impressed by the quantity and quality of the products sold at Cefn Mably tackle shop, the lakes now had a lot to live up to. I have fished Cefn Mably numerous times in the past, I knew roughly what to expect, but this was my first trip back to the venue after several years of living up North. Not only have substantial changes been made to the tackle shop but also the lakes. Since my last visit, the complex has seen the addition of a few new ponds, and the entire complex is now entirely Coarse fishing where as previously it was Coarse and Trout. I aimed to fish one of the original ponds known as the Horseshoe (using meat and pellets), as I wanted to avoid the suicidal F1 and Koi Carp. I was also hoping that my old favourite peg would be free, although this seemed unlikely as I arrived at the venue at quarter to 11 after a busy morning of wedding planning.

Parking at Cefn Mably is great, and because you can get so close to the lakes this was a huge plus for me. On looking, amazingly my favourite peg was free! Brilliant, now to get my gear up there… I imagine I looked like a right picture, using both my trolley and walking stick to get to my peg. It was going to take 2 trips but it was going to happen. Finally arriving at my peg with all my equipment present I began setting up. This was going to be a day for the pole. Inspecting my prospective swims, I had 2 easy margin swims (one at 5 meters one at 13 meters), open water in front and lilies at 11 o’clock (at 13 meters). I would feed 2 swims to start and depending how I got on, would chop and change tactics throughout the day to suit.
There was an angler fishing from a peg around the bank to my left and he was bagging up on roach and bream against the far end of the lilies that I could fish towards. There was also the tell tale signs of carp surface feeding from the noises coming from under the tree to my left. This was the first time in months I had fished at 13 meters and after plumbing up both swims, for the first 30 – 45 minutes of fishing it was a comedy of errors. There were tangles, several spray bar re-adjustments, a slight seat box move and a few more tangles. None of which resulted in me losing any tackle, but all were time consuming, and at that point I was left thinking perhaps I wasn’t quite up to fishing at this distance given my current condition. Finally shipping out successfully I placed the float next to the reed bed with double red maggot (old faithful) and waited. The floated bobbed around for a few moments then slowly slipped away under the surface. A small roach of a few ounces found its way to the bank; at least it wasn’t a blank.
The first fish seemed to have steadied my nerves, or steadied something, because there were no more tangles afterwards, and shipping in and out became incredibly easy and flowing. I continued catching a few small silver fish which didn’t discriminate between taking white or red maggots, or indeed the number I put on the hook. It was time to switch up baits and see what else I could coax out from under the lilies. 8mm banded pellets were my next choice, and although I had to wait a few more seconds the float sank away again, and this time a skimmer of just over a ¾ lb found its way to my net. While feeding my lilies swim I had began feeding the far margin swim with fishmeal pellets and meat to see if I could bring the bigger fish out to play. Using 6 mm square chunks of luncheon meat and single grains of sweetcorn didn’t stop the flow of fish and the bream were now feeding in earnest. They were sized from ¾lb to 2½lb and began to arrive at my landing net at a rate of knots. After fishing for 45 minutes I was already well into double figures in weight of bream, there was no stopping these fish. 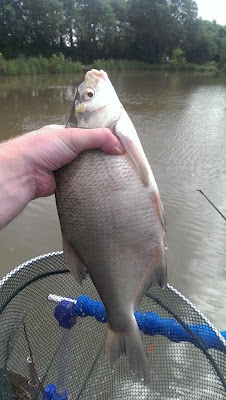 Time to switch positions! Queue distance margin swim! Sticking with meat I shipped out into the margin and the waiting game continued. The float registered a line bite instantly and only a few seconds followed when the float buried under the water. Another bream, this one was around 2lb’s and gave up the fight quite quickly. The next fish I caught was also a bream, slightly smaller around 1½lb but it was intent on jumping into the bull rushes next to my swim! Right out of the water like a missile… crazy fish. The bream were in abundance in this lake and I gave up keeping a tally after 60, all registering between ¾lb and 2½lb. I had only caught one Carp by this point, but I knew the lake contained a very healthy head of sizable fish. Switching up to my 14 elastic and using a 10mm rectangular cube of meat would hopefully prevent the Bream picking up my hooked offering. I also switched from using 4mm fishmeal pellets to 2mm Sonubaits Krill feed micro pellets. 3 good handfuls would get the swim going. This was definitely the turning point.
Shipping out, the float began bobbing around uncertainly before tearing off under the nearby tree. The elastic erupted from the pole and after applying some considerable side strain I had pulled the fish out from under adjacent foliage. It wasn’t content to stop there though and made a bee-line through the lilies (my other swim) bottoming my elastic and pulling the hook in the process. Disaster, but whatever it was, it was big (or maybe just angry). I shipped in feeling incredibly disappointed, re-baiting my hook with an equally large hook bait and shipped back out and waited for another fight. The bites were instant and again my elastic tore under the water, wrenching the fish out from under tree. I was determined to land this one and despite nearly bottoming my elastic again I brought the carp to the net. These fish are turbo charged! Another cup of pellets kept my swim ticking over. There was no let up between fish, and my float was in the water no longer than 30 seconds before either; getting a bite, connecting with a fish or having to re-bait my hook because the fish had cleverly relieved me of my hookbait!
At this time my Dad dropped by to see how I was getting on, and stuck around to watch me land a few greedy Bream, he too seemed surprised by the rate the fish were coming to the bank. Checking the time it was 3.30, I would stick with the carp until I decided to call it a day. The following 2 hours of fishing resulted in 10+ Carp and a few more hungry, gutsy Bream. The action was phenomenal and on 4 other occasions I lost very sizable fish. I have subsequently learnt that there are specimen Barbel in that lake which might explain the explosive runs I was getting from these mystery fish. Either that or they were sizable doubles. After being snapped by my last fish (the most aggressive run of the day) I decided one last fish would see me complete what was easily a 100lb bag of fish. A great weight for less than 6 hours fishing.
Shipping out for a final time I settled my hookbait down the “shelf” of the margin and began to wait. The line bite that registered told me fish were still feeding away in my swim. The float dipped under and quickly striking I missed the fish, and pulled the meat from the hook in my eagerness to catch. “That’ll do for me” I thought and began to ship in, separating my pole section my section to pack away. When I was down to my top 5 the elastic burst from the top of my pole and buried under the water! What on earth? Had I caught a snag and not noticed. Nope. A final Carp around 5lbs decided he liked the look of my bare hook. I laughed while bringing it in, the angler fishing the peg to my left must of thought I was nutty, but to me this fish topped off what had been an extraordinary days (more like afternoons) fishing.
Cefn Mably is a great fishery with a truly amazing amount of fish. Without sounding daft, if anything it was too easy. I’ve been assured by my angling friends that all the other lakes fish exactly the same and 100lb bags are extremely common at this venue. Fishing here I also re-learnt things that I had previously forgotten and will need to change before my next outing.
These are all things I will put into practice before heading out again, although I enjoyed Bream bashing and switching up to catch the Carp really made the difference. I ended up having one of the heaviest bags I have had whilst pleasure fishing. The competition angler in me was quite disappointed at the ones I lost, and my aim for next time regardless of venue will be to increase my catch rate while reducing my lost fish rate (sounds good in theory).
It was a great day on the bank, one I would undoubtedly recommend to my angling friends. Cefn Mably not only has a great on site tackle shop, with excellent facilities it also has exceptional fishing through-out (it has featured in the “fishing Guru” TV series) and is developing a reputation as one of South Wales most productive fisheries. With days like this common, it is not hard to see why.
As a venue I would say:
Fishability **** ½
Accessability **** ½
Value for Money **** (My only complaint, it is the most expensive place I have fished in South Wales (so far) at £7.50)
Disabled Access **** ½ (All suitably large and easy access pegs with a flat path around all lakes)
Share