I’m always weary of venues which advertise stocking levels, as follows “We have Carp up to 25lb’s”. What this generally means is there is 1 token big double in the lake along with a few little ones. Still I am not one to shy away from trying new venues, and with winters hold on the seasons slowly giving way to spring, I was quite hopeful that today would be a real confidence booster. I found Thorney lakes on a recent trip back from one of the local rivers, and after some internet searching I saw a lake that looked really promising.

Arriving at the lake and after speaking to the owner about a very confusing sign I was pleased to find a lake with lots of features. The left hand side of the lake looked more established and had more rushes and 2 bridges, the right hand side of the lake had an island. All the fishing locations (there were no defined pegs – which was both a blessing and curse) had potential margin swims and well positioned trees which now hung over the lake offered more than a few “fishy” swims. After a bit of a coin toss on swim selection I settled on choosing a peg on the left hand side of the lake. It had margin options and a bridge, and with the wind was blowing from right to left, I hoped that some of the bigger fish would be hold up against these margin features.
After plumbing up and finding a uniform depth of 2 1/2ft regardless of where I put the plummet I chose two lines of attack over my 4 top kits;
I would fish lines at 6 and 11 meters in open water and 11 and 13 meters against the margins. There were a few fish topping, so I would start at dead depth and shallow up as and when required. I find it very difficult to not feed, even though it’s still quite cold. So I potted in a small amount of micros, with a few grains of corn and a few pinkies and maggots on both 11 meter lines, leaving the other 2 lines alone.

On the first drop in the was a definite tow from right to left and once the float had moved along about 15cm, the float registered a very subtle bite before it slunk off to the left. It was a nice Roach of a few ounces. On inspecting the fish, it had had a recent close call with a beaked predator and had a nasty looking gash near its tail. 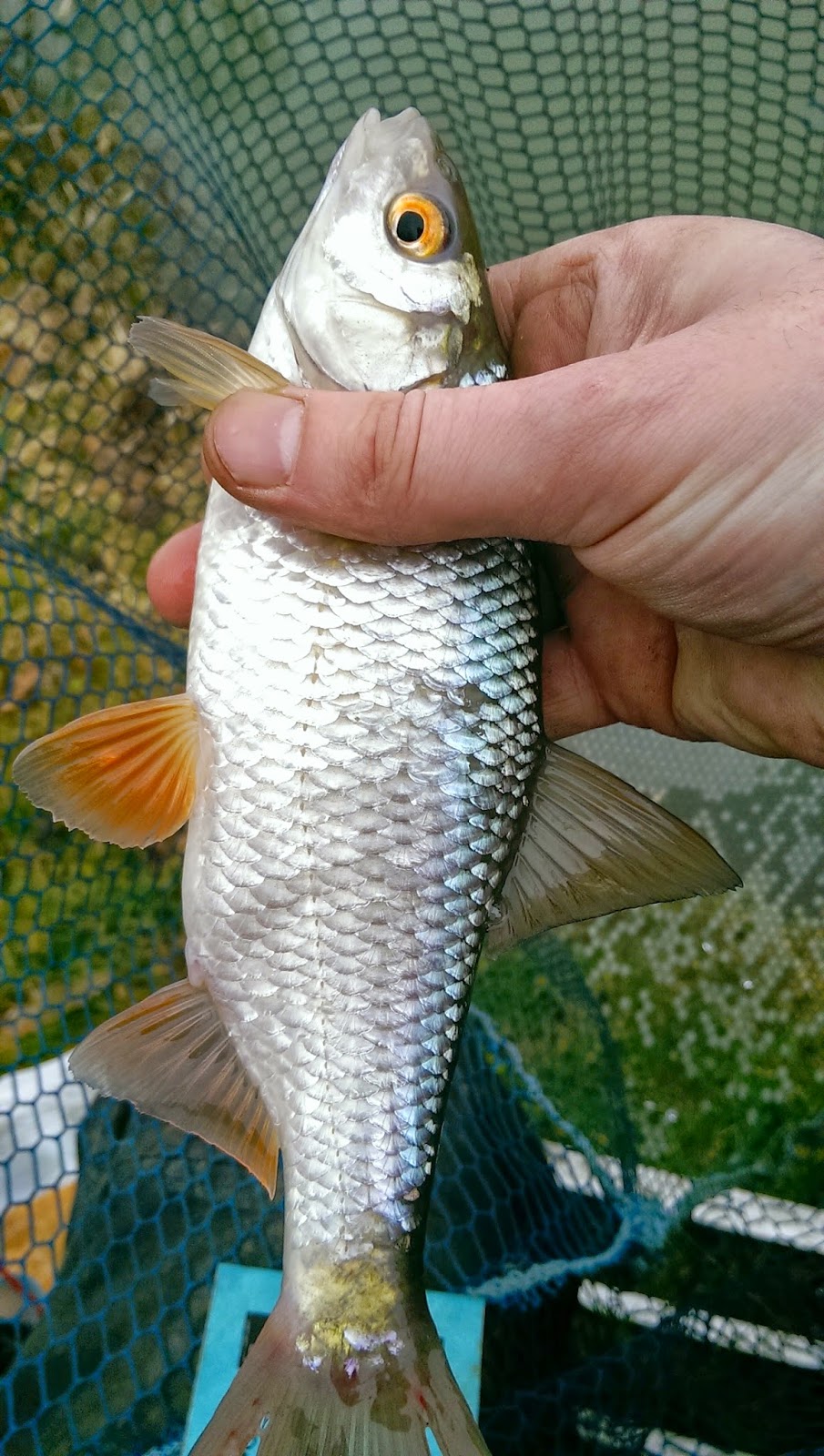 I shipped back out and had another bite fairly quickly. The stamp of fish was between 4 and 8 ounces, and my new Matrix 8 elastic was handling them excellently, not bumping a single fish! After a winter if intermittent pole fishing it takes me a little while to get use to using fishing the pole again. That was no more obvious than today’s session, when I managed to tangle 3 rigs when I over zealously shipped back. I managed to sort my act out eventually, and before long it was back to normal. After a 20 minute period of activity I decided to fire in a small pouch of pinkies to keep the swim going. Although I had a bite fairly quickly, what followed was 15 – 20 minutes of silence. Switching between Maggot, Caster, Pinkie, Worm, Meat, Pellet and Corn I couldn’t buy a bite. Then switching back to maggots the fish seemed to have arrived again and I had a spell of 20 minutes of catching nice roach and skimmers. 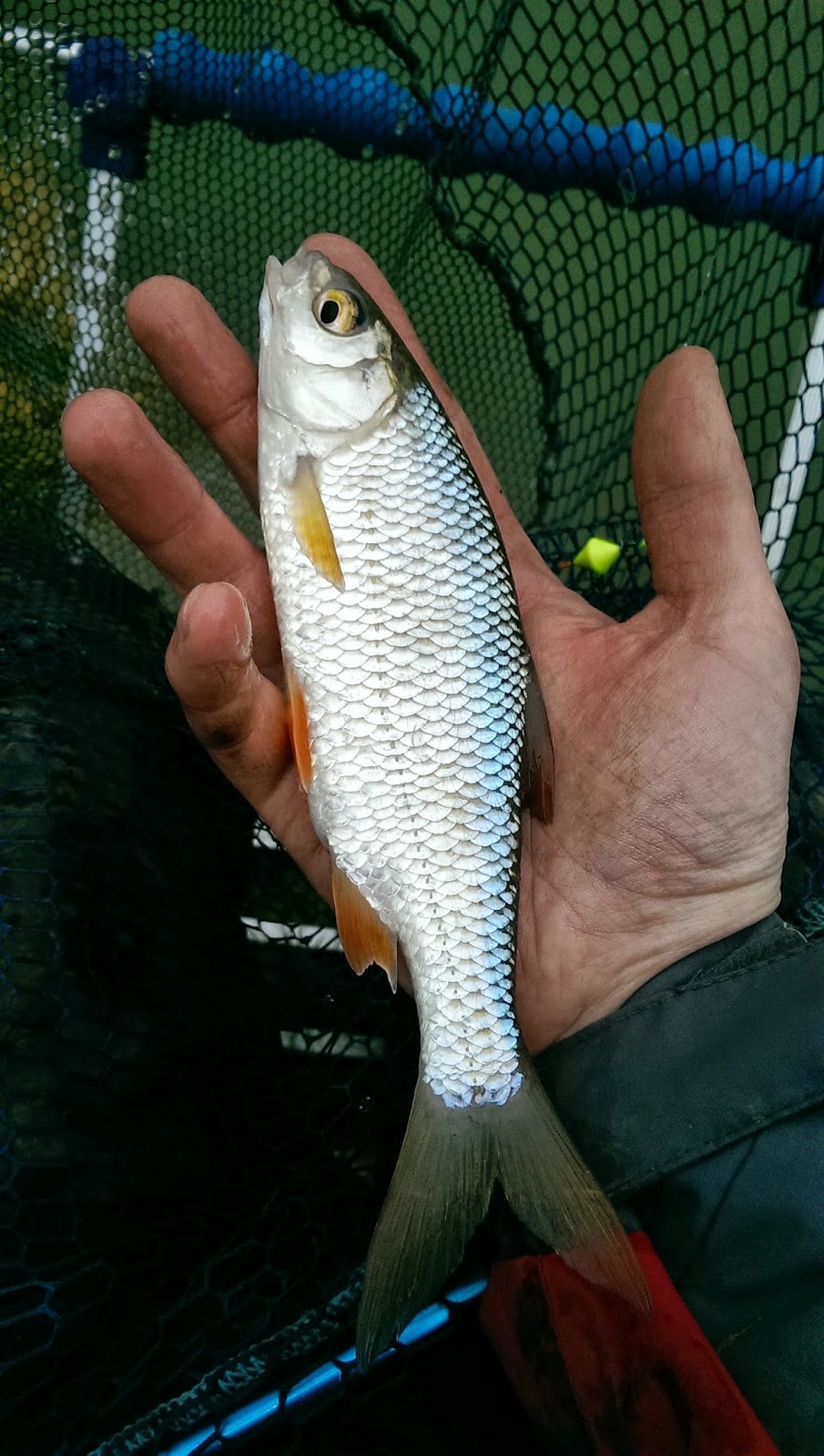 The bites/no bites pattern happened like clockwork, and after 15 minutes the fish moved off, I tried various switches, rig patterns, baits etc. but no amount of switching would bring on a bite. So eyeing up my thermos I chose the band on a pellet and sit it out next to a margin for a while. Other than 1 small knock I couldn’t bring anything to my hookbait, switching between corn and meat did nothing either. This was turning into one frustrating venue, and coupled with the constant racket of the roaming Guinea Fowl I was slowly beginning to lose patience. I remembered reading a blog recently that explained in the winter you should sometimes expect a wait of up to 15 minutes for a bite before changing/moving, I tried to keep these words of wisdom in mind. 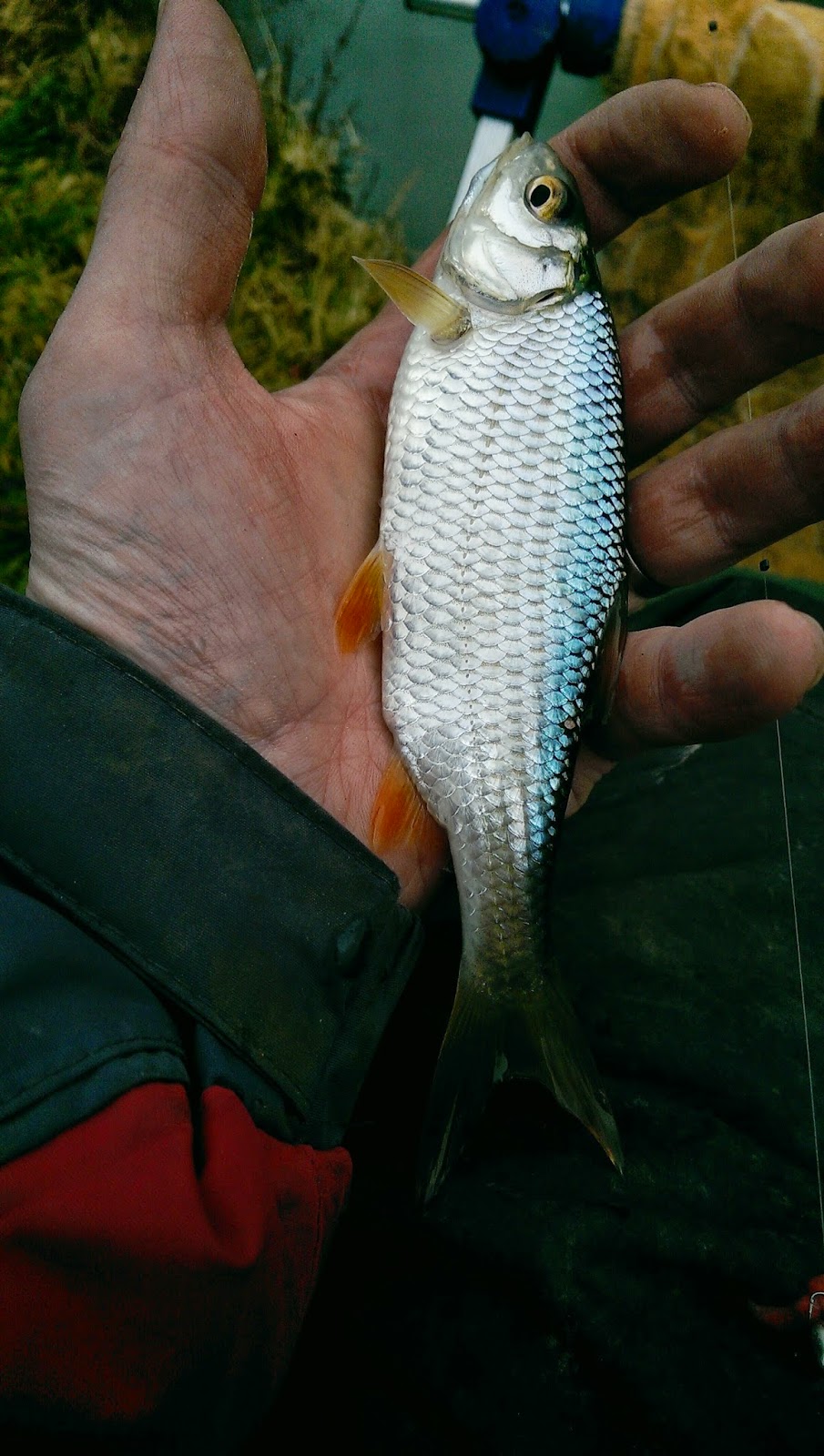 15 minutes came and went so I switched back to the 6 meter open water swim on double maggot (only double red caught) and brought in 19 more fish before the quiet spell struck. So I re-baited the margin swim before going for a walk to speak to the other anglers around the lake. 2 lads were fishing corn in the corner and admitted to having one carp (9lbish) and 3 bream, but other than that it was quiet. The was another angler opposite was balling in groundbait (something that isn’t allowed) and he had been steadily catching all sorts, all day. A couple of minutes later and feeling re-invigorated after watching the angler opposite land an F1, I returned to my box, hooked a grain of corn and shipped out to open water. Not a flipping bite! Pushing it up against a margin I tried the same, but with the same result! The afternoon was tickling along and to be honest, I had a feeling that I was drowning bait for the sake it.  I resolved to give the open water swims a real blast before packing up around half 2. This was by far my most prolific spell of the day and alternating every 2 fish between the 11 meter and 6 meter swims I managed a solid 30 minutes of fish before they departed. My last fish of the day was a fin perfect skimmer, which “snotted” up my line wonderfully. 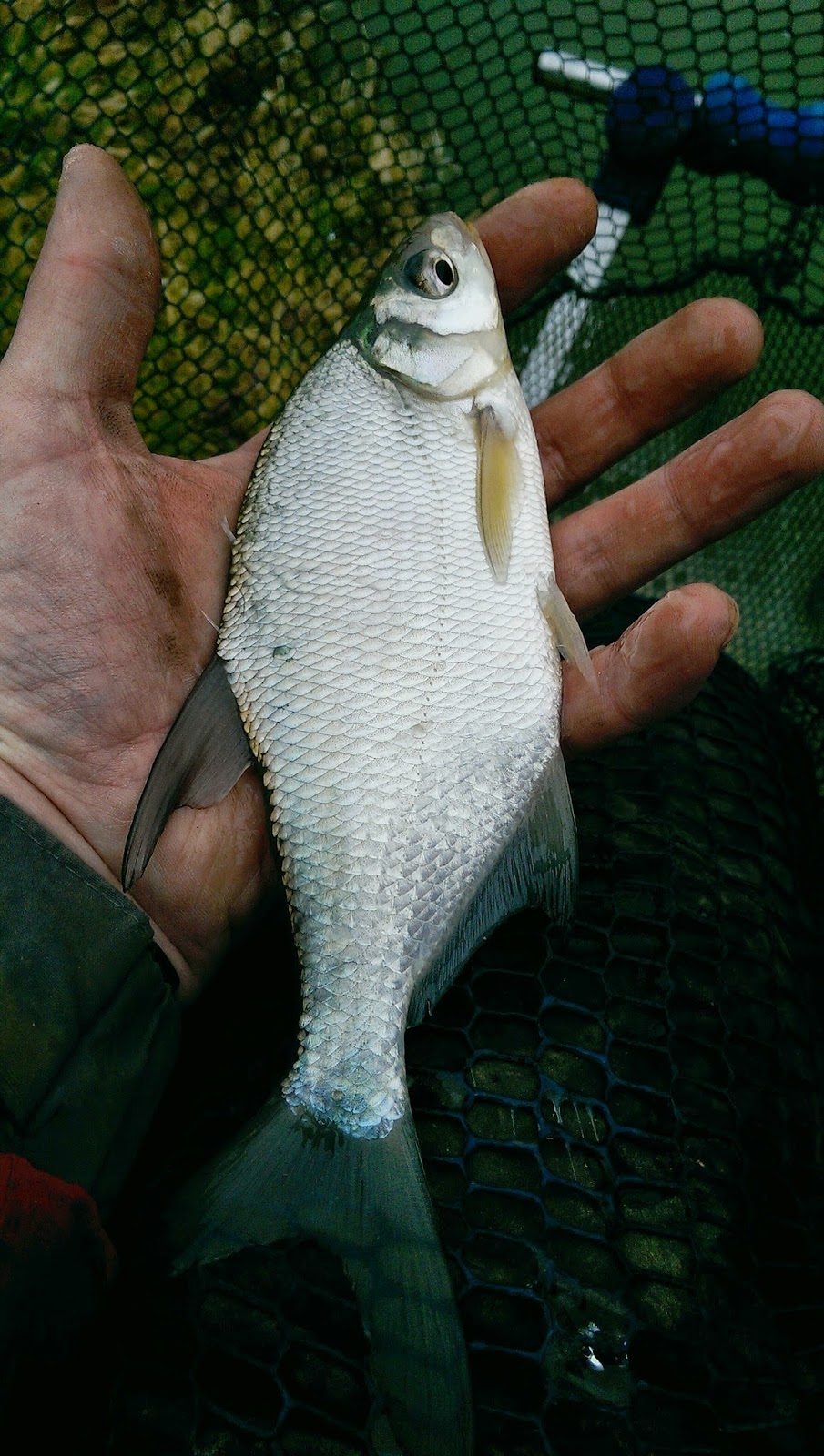 I’m not really sure where to begin with Thorney Lakes, the venue offers a lot of potential and numerous features, but today it did not play ball. Also I’ve rarely encountered a venue where the fish move in and out so punctually. The quiet spells, although predictable formed no pattern other than time, (they would hang around for that time period whether feed was going in or not) so I can only assume that a shoal of fish moved around the lake, and that it took roughly 15 – 20 minutes for this to happen.  The lack of pegs meant that you could fish where you wanted, but it also meant the most places around the lake where you could fish, were incredibly soft, and 3 times over the day I had to re-position or free my box legs from some sticky clay.
So what did I learn? I should have set up a straight lead rod and tried a few baits at distance against the far right margin, or maybe I should have solely targeted silvers given the time of year, instead of alternating between the silvers and carp line. I did enjoy fishing this venue and will return in early summer when I know the Carp are feeding more actively, I may even take my father in law on his next visit as the lake really does offer a lot of potential. As a plus there are toilets on site and from April 1st there is a little club house next to the lake, which is open to anglers. There are also a few picnic benches if you fancied a break away from the water. The banks are flat and well maintained so getting a wheelchair to a lot of the pegs would not be an issue either. Also, as it was before April 1st the owner only charged me £5 rather than £7, which was another plus. All in all, this venue is only missing… more fish. But maybe today was just a slow day. Leaving I spoke to one of the owners who joked and said “it’s not an easy lake to catch fish from”. The fact is, it was fairly easy to catch fish, just not the ones I wanted!
As a rating I would say:
Fishability ** 1/2 – Looked very promising, shame it didn’t deliver.
Accessibility – **** – Very easy to find of the many road coming through Thorney
Value for Money – ***1/2 – £5 – it was nice to pay slightly less, even if it was because of the time of year
Disabled Access – ***1/2 – A fairly big car park, flat surfaces and banks mean that getting a wheelchair to the waters edges could be easily achieved, although it would be advisable to wait until slightly dryer as some areas were quite muddy.
Share