A solid weekend of fishing was going to begin on Lands End Specimen Lake. I was up and out the door very early (I had to take my wife to the train station for 6am), and manage to arrive at the venue just after 7. Unsurprisingly I was the only person at the complex at that time, although I was aware that a match would be held on the ones of the other lakes. I had read Tony Rixon’s blog back in Feb, so made a beeline for peg 34 and began unloading … once I’d had a cup of tea. A quick note on the drive to Lands End along Jack’s Drove. I have never seen so many herons, massive blue ones and smaller white ones all busy spearing fish from the road side rhynes, I really should have brought a proper camera.

Anyway, back to the venue and peg, I would be fishing the pole at 13 and 14.5 meters towards a bush (on the right) and end of the island, as well as a silvers line at 7 meters out in front.

As this was the specimen lake and I had read the fish grew into some lumps I went in heavy…ish. My set ups were;

I plumbed both swims and was surprised at how deep the mid channel. I eventually found a flat spot mid channel and threw in a small handful of pellet, caster and corn. I aimed to come back to this swim later but first off, I banded on a 6mm pellet and shipped out towards the island. Fishing at 1 o’clock towards a bush I had my first few indication and after a few minutes I was off the mark with a very chunky F1 up around 4 -5lb. I shipped back out and began getting bites fairly instantly when they owner came around. I missed a bite and proceeded to have a 5 minute conversation about what baits to use. He is a very enthusiastic chap who really insists on dampening pellets. 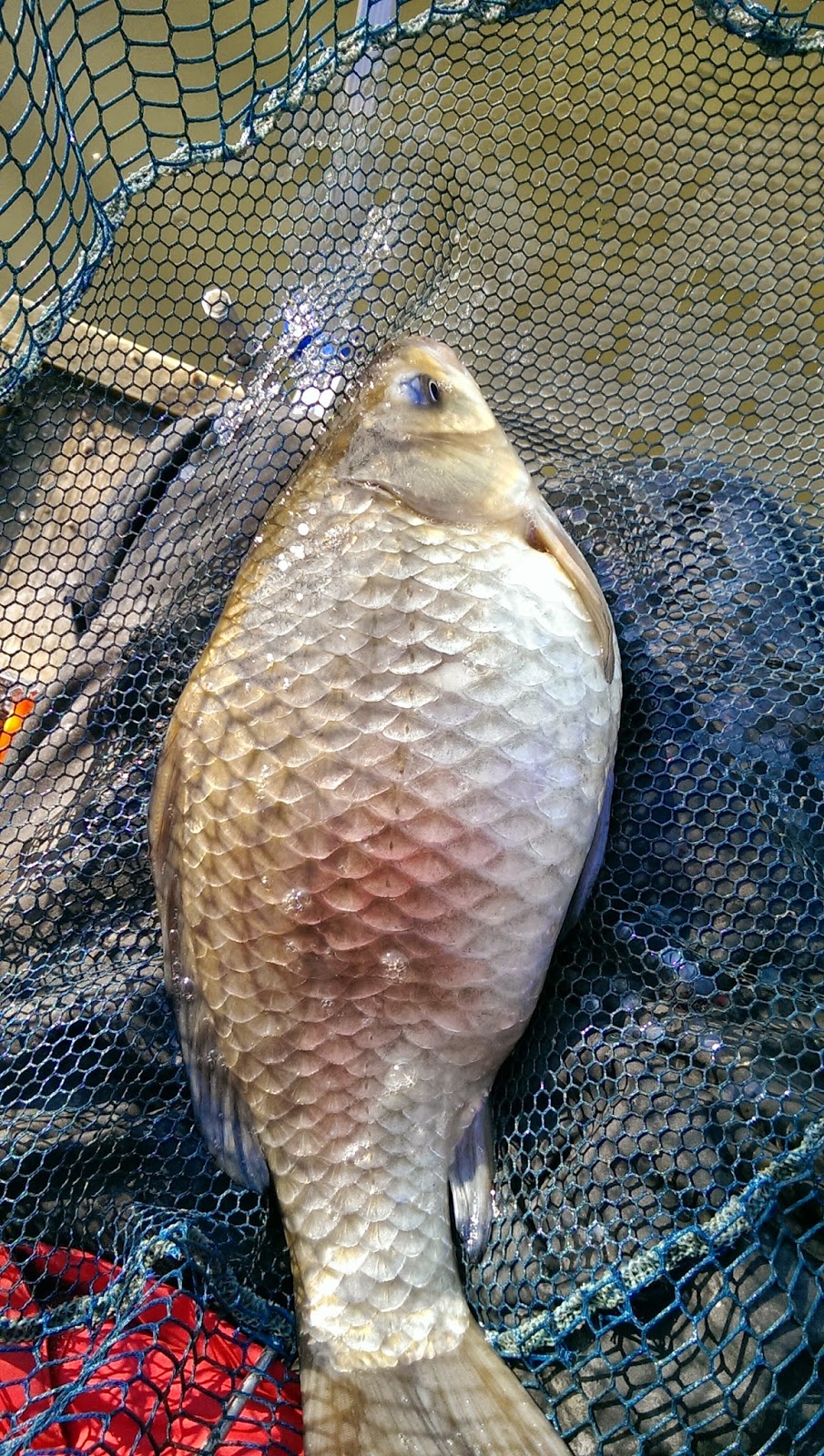 When he left (I could hear the match guys arriving, and beginning to take the p out of each other) I shipped out the 14.5 to try to try the edge of the island. The bites were really slow and before long I was shipping out the mid channel kit to try and keep my fish tally ticking over. I was pleased to see that the silver fish in the lake were more than obliging and I quickly put a good string of fish together including a rogue Bream, which fought like a bag until it saw the net and surged off! Fortunately my 10 elastic was enough to get it under control and eventually in the net. 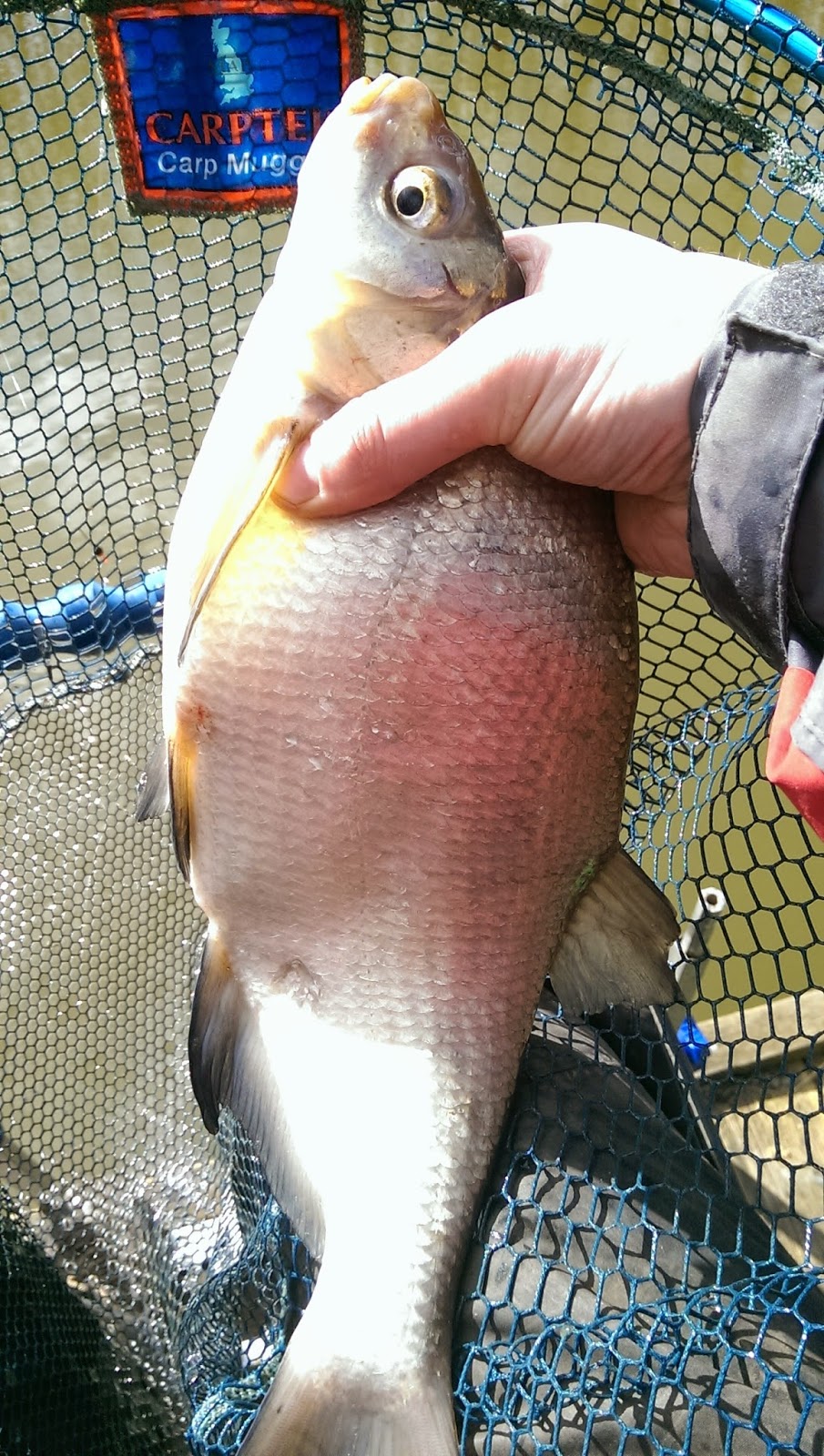 The day was starting to warm up and I could see some fish moving around the island. A quick re-read of Tony’s blog post, and I decided to fish mid water with 6mm banded pellet. I shipped out and had an indication instantly, a few minutes later and my 16 elastic was being bottomed out. I think I may have fouled hooked whatever it was. It rocketed off, with a massive swirl and after a few more seconds everything went slack. I think I said “darn” but I can’t remember due to the disappointment of losing my first proper Carp of 2015. 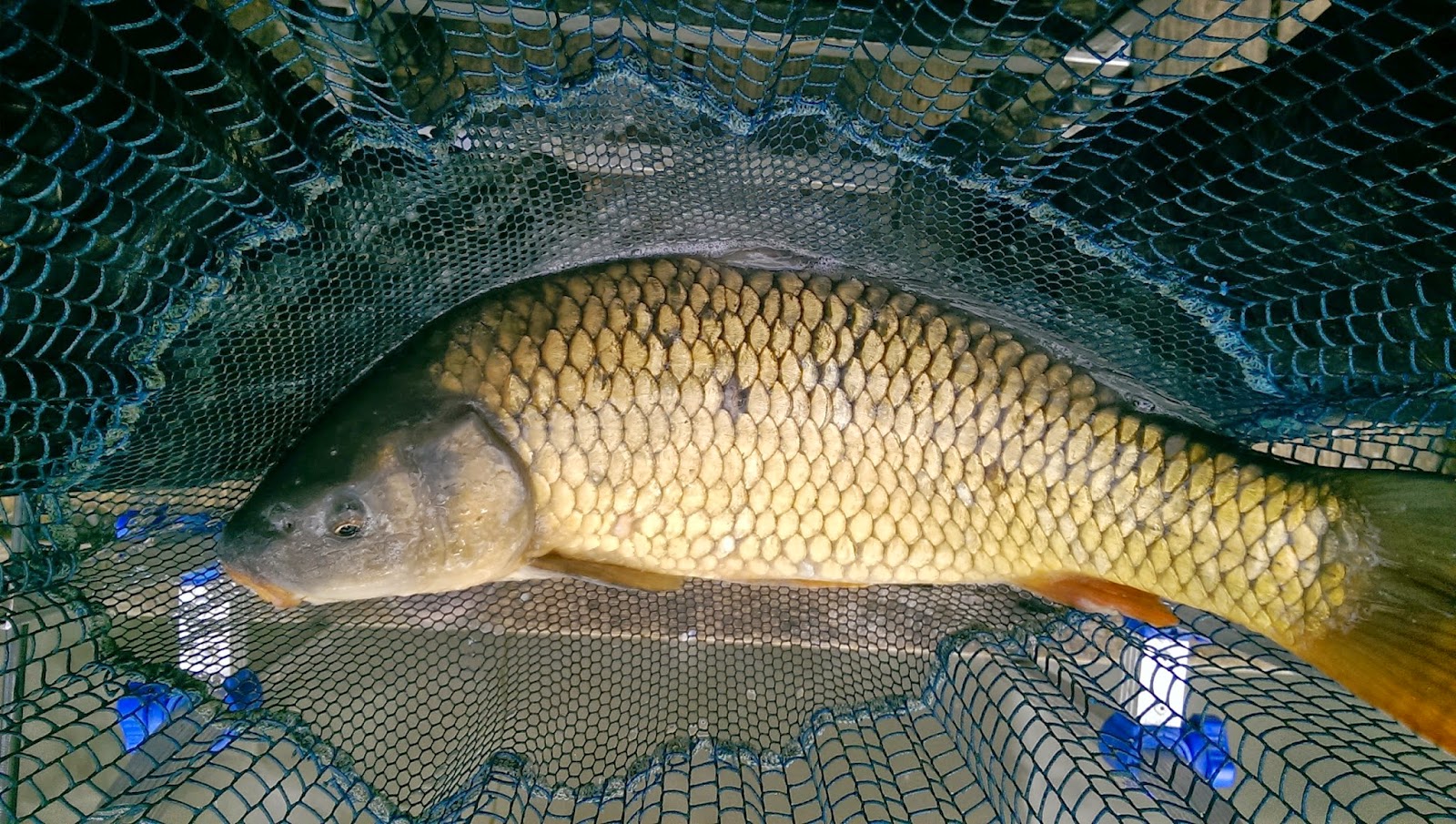 I shipped out again and after a bit of lifting and dropping of the pellet the float settled, bobbed and crept under. I was into Carp and after a near miss with the aerator I managed to get it in the net, a nice fish of around 7lb. Firing out a few pellets the carp seemed to be hanging around the island corner and after a bit of pellet bouncing I could bring a fish to the net every 15 – 20 minutes. These included several F1’s, 6 Carp (Biggest 11lb) and a Chub – which was nice, as I didn’t get on the river for any before the end of season. 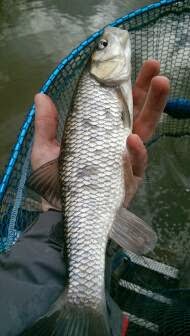 Around 1pm the swim absolutely died (maybe I overfed it?) and despite trying up in the water, on the deck and switching between every single bait I had I could not get a bite. The sun had turned the corner of the lake into a bit of a sun trap and I could see some fish including a Ghost carp cruising around. I switched to 14.5 meters and dropped a banded 6mm pellet on the nose of the Ghostie. The fish didn’t hesitate and grabbed the pellet. It went off like a train, and at one point I thought I had lost it to the aerator, but after a bit of jiggery pokery it swam back towards the corner where I persuaded it towards the net. It was a lump of a fish and bigger than I expected, hitting the scales at over 8lbs.
Playing the fish through so much open water spooked a lot of the other fish and sadly I saw no more action mugging carp as they cruised by. For the remaining half an hour I sat out on the pole next to the island and managed another… Roach! 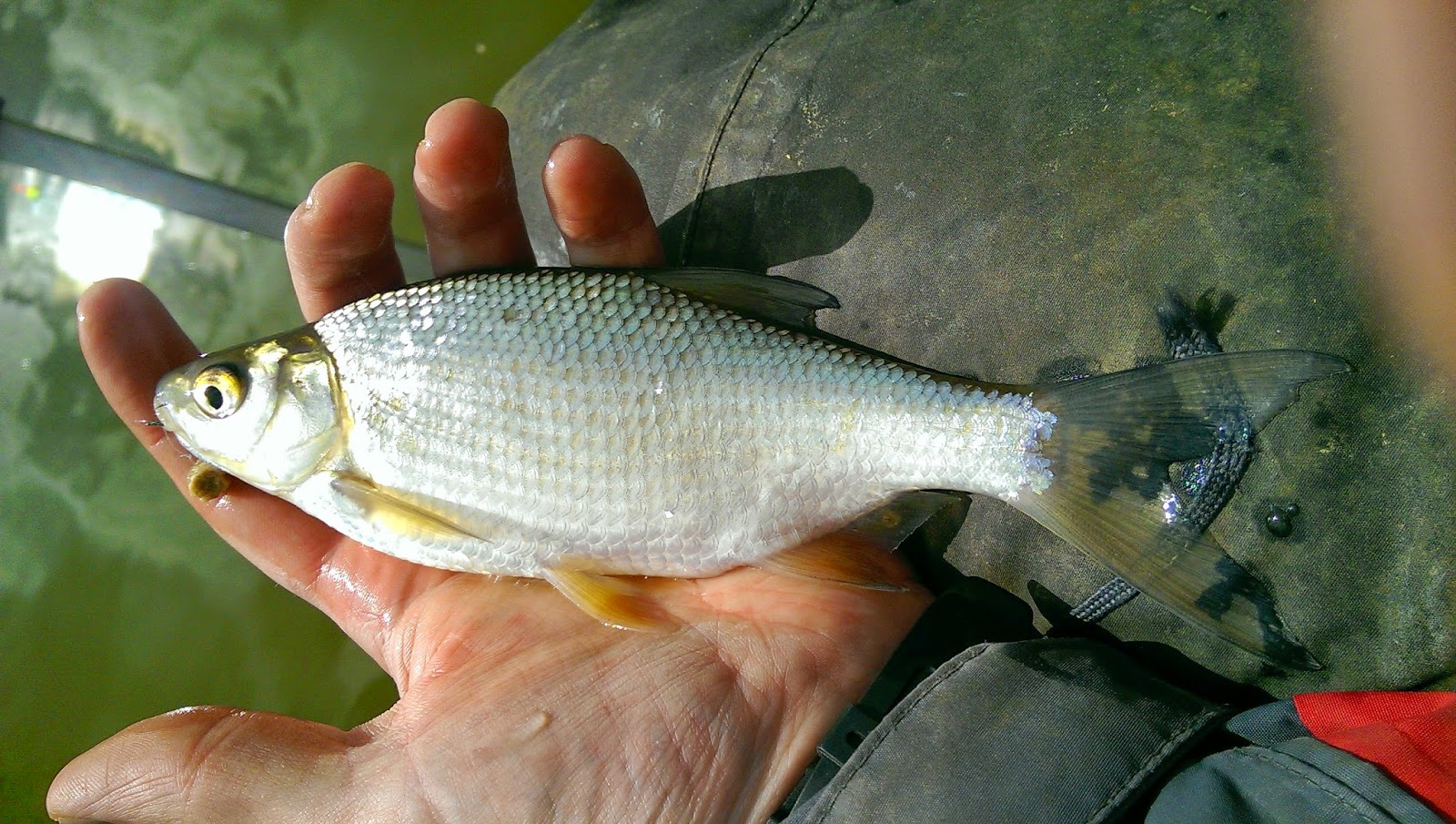 Taking a 6mm pellet. Greedy bugger. I packed up around half 2 as I was starting to yawn every few minutes, I also wanted to get back to catch up with the 6 Nations, more specifically the very important Welsh game. Faced with the hour + drive and packing time I wasn’t going to be home much before 4. So I called it a day, packed the car and made my way home and to be honest I left a little bit disappointed.  I think from reading about this place I was expecting a good fish a chuck. I suppose I completely overlooked the fact that it is still March and often quite cold. I bet this fishery in the summer is absolutely electric, and I will certainly be returning to try out this theory.
Lands End is a very, very nice venue. It has a few very easy access pegs off a tarmaced path which fairly flat (the path leading to the lakes is on a decline so pushing a wheelchair up the hill afterwards may prove quite difficult). The pegs are quite well spaced on all lakes and as recently as February has seen a bag of fish over 200lbs win a match, something almost unbelievable for the time of year. The specimen lake is reported to also be an excellent Perch venues with specimens up over 5lbs! Lands end has a lot to offer and I would recommend it to anyone looking for a busy day out whether targeting Carp or Silvers.
As a rating I would say:
Fishability – **** – Looked very fishy and very well maintained.
Accessibility – *** – I had to find it on Google and enter the road name into the sat nav
Value for Money – *** ½ – £7 – Average cost for a good commercial fishery
Disabled Access – *** – Although listed in the Get Hooked fishing directory and Disabled Access, and there is flat tarmaced path to some pegs, the majority of the path is gravel and chipped stone which would make push a wheel chair quite difficult.
Share