Today was part 2 of my fishing weekender, and to be honest I got off to a bit or a foggy start. Catching up with the rugby the previous evening while celebrating a glorious Welsh win meant that plans of a very early start were off. I had a few things I needed to get done in the evening so I opted out of fishing Avalon or Sedges and the hour+ drive that that involves, and went for something a bit closer to home. Revels is a venue 30 minutes away and with several lakes to choose from I was curious to see how this venue would fair after the cold spell. Having fishing the “Dead Tree” lake previously I also wanted to see what the other lakes had to offer.

Arriving at the venue and dodging several kamikaze pheasants on the way, I paid my £6 and went for a quick walk around the complex. There were a lot of pegs to choose from, but after spotting some carp held up in the corner of the canal lake I choose my peg and went to collect my gear. Getting to the peg and setting up my gear my 2 lines of attack were, 2 o’clock at 7 meters to the dead tree (and Canal lake), targeting silver fish, and 13 meters between 9 and 12 o’clock on the opposite margin targeting carp. These are almost exact the same tactics I used on my last visit and I was hoping to replicate the previous results too.

It was quite cold this morning so to start I fed the tree swim with maggots and casters and fed to margin with a few grains of corn and 4mm pellets, for rigs I would and topkits I would be using;

Plumbing the far shelf I was surprised how shallow it was and after a fair bit of plumbing around I found a slightly deeper section (by 3 inches) and set the depth. The tree swim was deeper than anticipated at around 5ft, but starting on this line with double maggots, it was clear that the fish were taking the bait on the drop. The bites would be fairly instant when the bait was falling through the water but as soon as it reached the deck the fish would take longer to find the bait, with no increase in fish size. I shallowed up one of my roach rigs and altered the shots to an “on the drop” pattern. The bites were coming thick and fast, and after throwing in a small handful of maggots I had a good stream of Roach and Rudd, although none of which were netters. 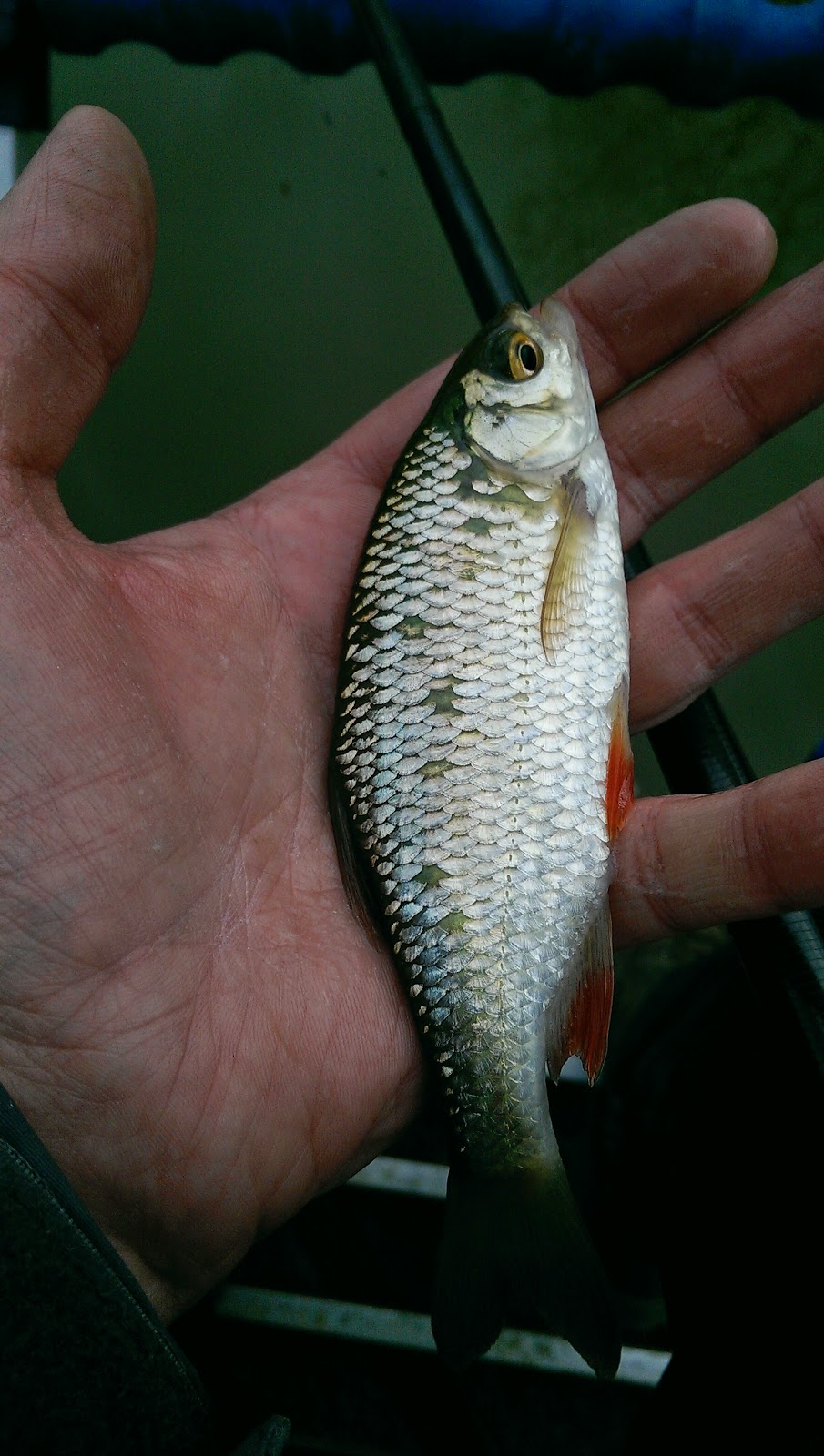 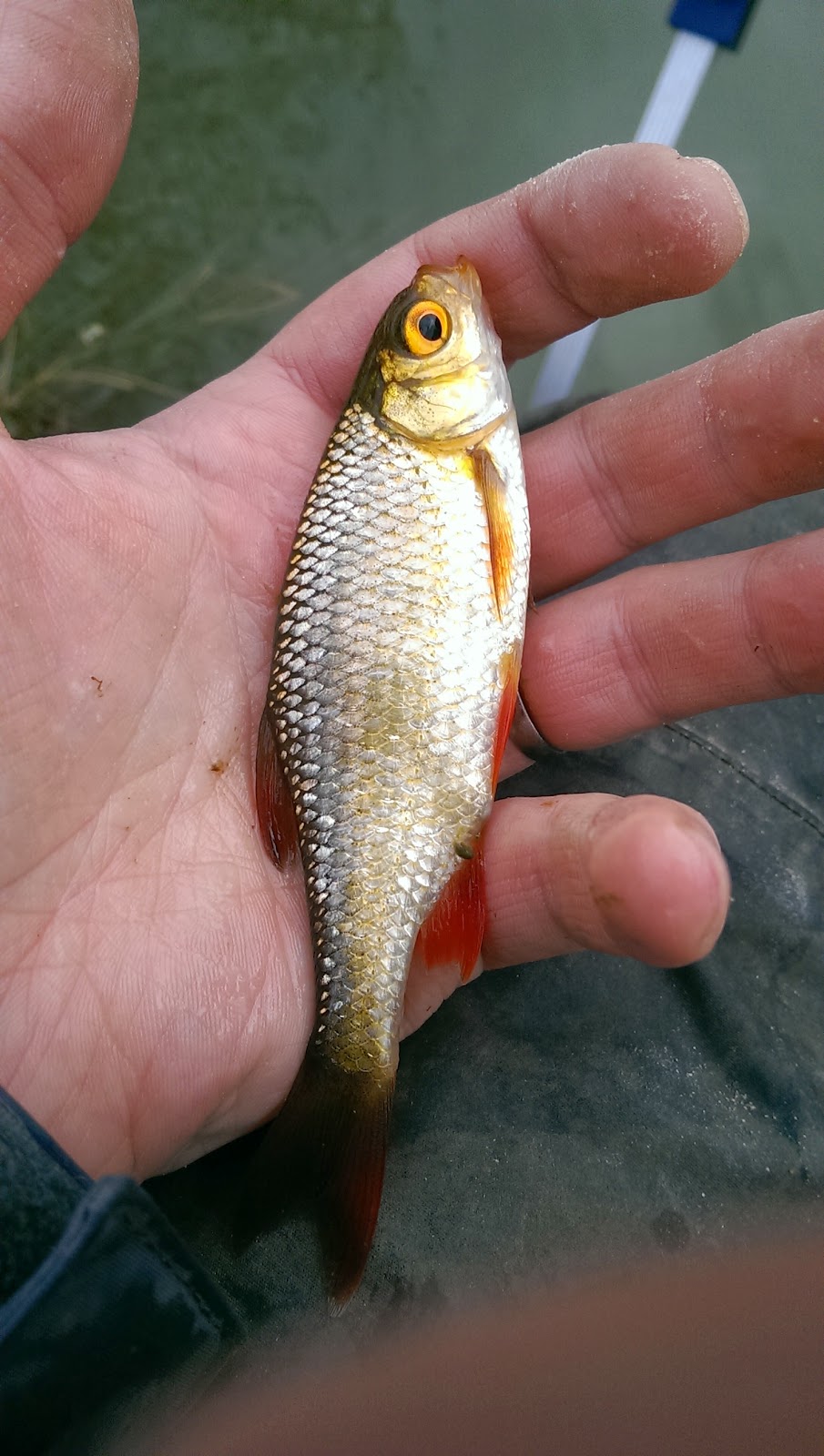 Glancing over at the margin swims I could see a small “plip” of bubbles on the surface, I cubed up some meat and shipped out to 13 meters positioning my hookbait right in the middle of the 3 inch hole. After 30 seconds I had a few small indications, so I lifted the float to re-position my bait, the float began to edge off to the right (behind the tree). Striking, the fish took off, and after a huge boil in on the surface everything went slack and I was left with a scale on the hook. I must have fouled the fish moving my bait around. I re-baited with meat and shipped back out. It wasn’t long before I was getting indications again and within 2 minutes I was in to another fish. This one took off too and only after some rigorous persuasion and 2 near misses with last minute lunges at my platform did it finally give in and flop into my net. A nice fish of over 7lb – putting the fish back it swam headfirst into the platform leg, before turning and swimming off towards the broken tree. Plonker. 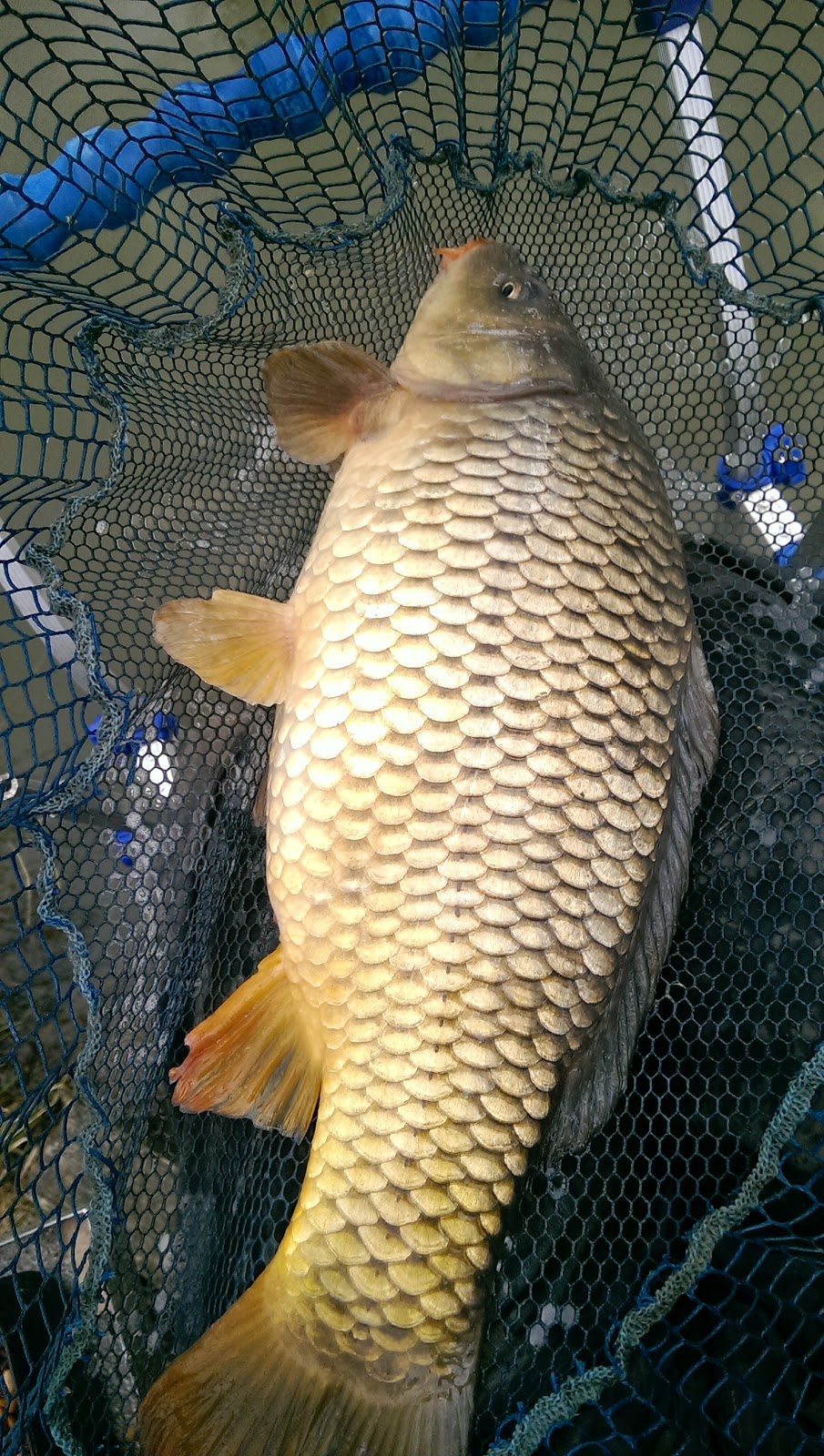 I fired out a few pellets and corn then shipped back out. This time with cylindered meat rather than cubed, with no indications after 3 or 4 minutes (I’m impatient) I started moving my rig down the length of the margin, roughly 2ft away from where I was initially fishing. A few minutes past before the float bobbed and went under, I was in to another Carp, although this one was a fair bit smaller. The fish didn’t look like it have ever been caught before, so no wonder it put up such a scrap! I had 4 more in quick succession all fish between 4 – 7lb, although I lost another 2, 1 of which snapped me about 6 inches above the hook! 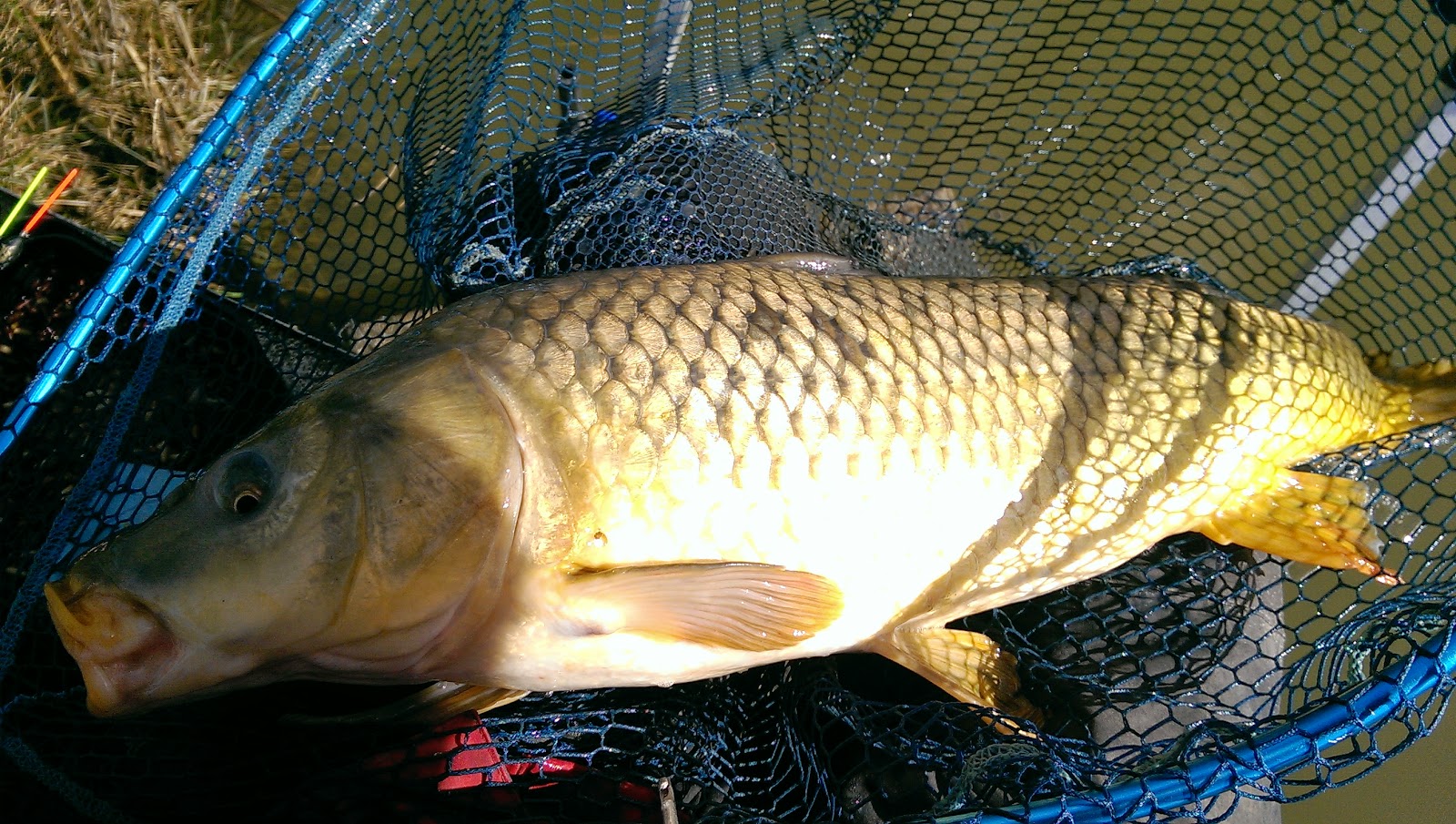 Meat was definitely doing the business as long as the fish stayed on the bottom, but with the sun now out, I could see fish milling around the surface, occasionally taking floating particles. Not something I expected to see on a cold morning in March! My last fish made a beeline for a snag, and would have stayed stuck had it not swam straight out (dislodging itself) and into open water. The act of freeing itself spooked the rest of the fish in the swim where they all retreated to the safety of the rear side of the fallen tree. I had a quick walk around the bank and could see 4 or 5 fish basking in the sun, well out of the reach of any poles.

Hoping the carp swim would settle, I went back on the silver line and managed a good run of silver fish with the biggest roach of just qualifying as a netter! I stayed on this line for 45 minutes to an hour, when I saw the carp cruising back up and down the margins on the opposite bank. It was almost a repeat performance of earlier in the morning, only this time the fish became spooked after 3 made it to the net. 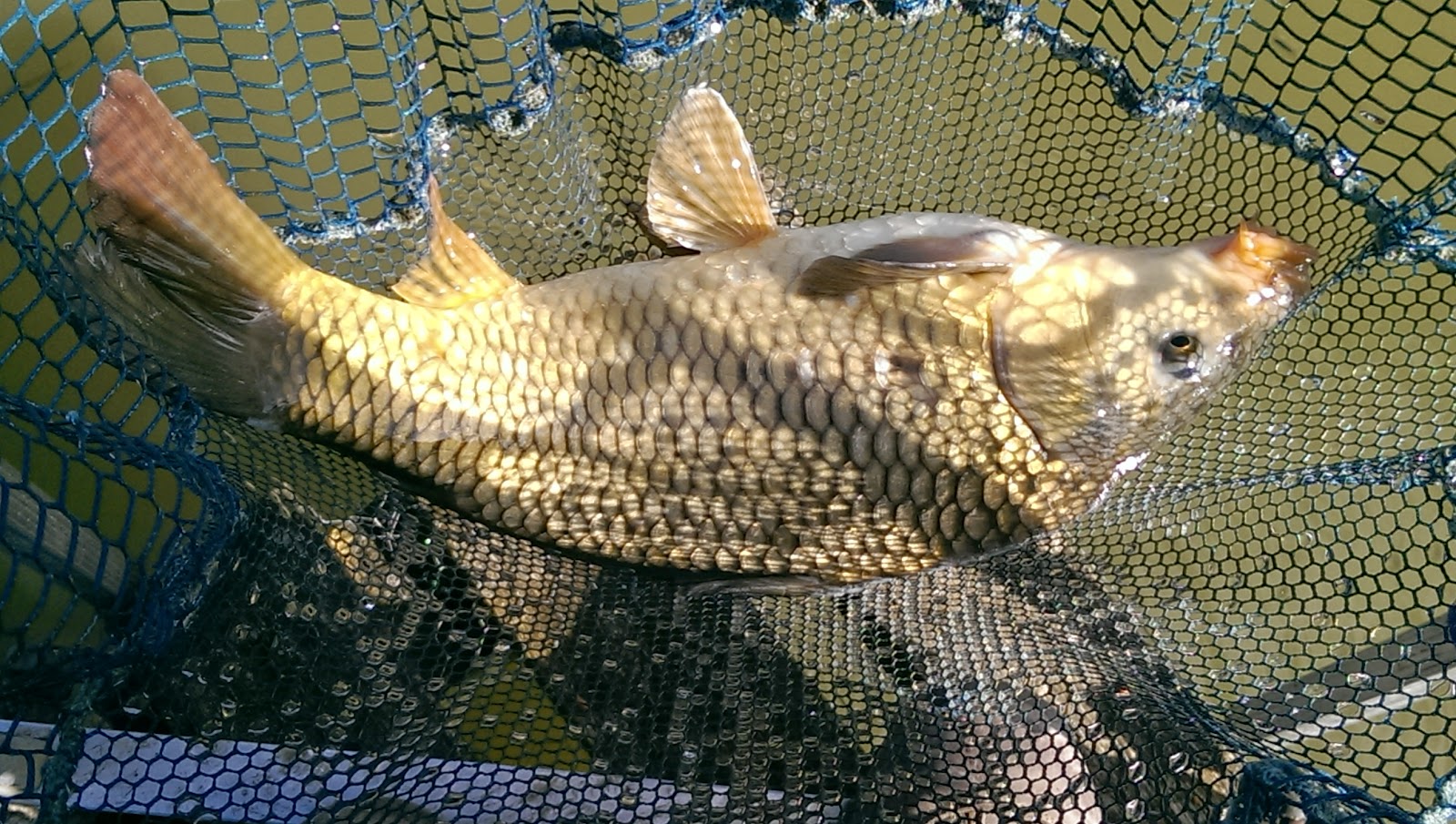 My last fish of the day was a bit of a fluke. Time was getting on and I decided to call it a day around 3, but before packing up I wanted a cup of tea. Holding the pole at 13 meters was getting tiring, so, in my laziness I balanced my pole on a tree about 10 meters away, while still managing to keep my rig in the water. 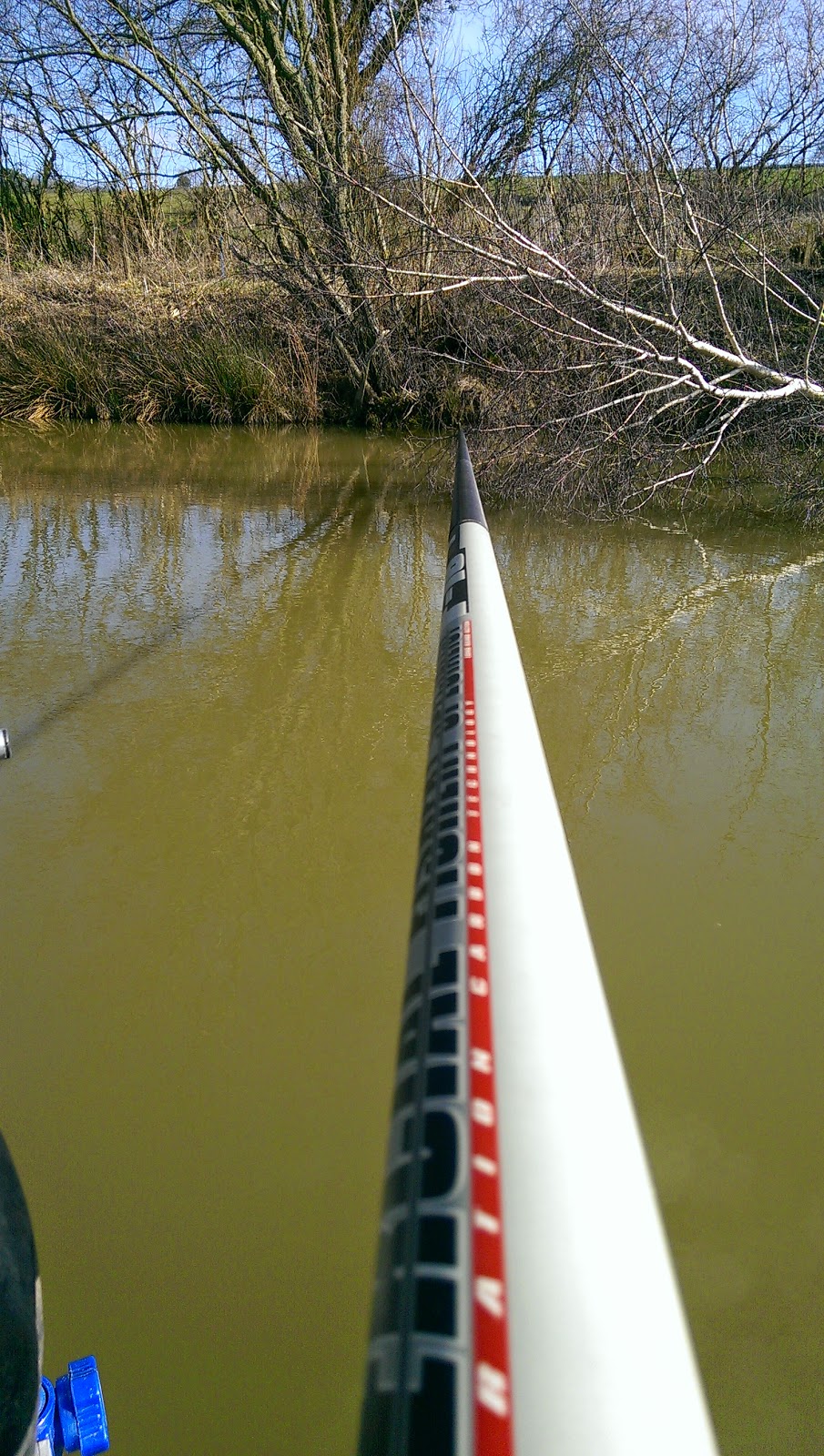 Half way through my cuppa’ the float bobbed under and I was into my last fish of the day. A carp of around 3-4lbs. It was a bit hairy really! Having to bully the fish out from behind a tree, while trying not to get my pole caught in a branch. Not for the feint hearted. All in all it was a very enjoyable day but to be quite honest the venue fished almost exactly as it did on my previous visit which only confirmed my view that the lakes are stocked pretty equally and with the same stamp of fish. Although I will return to Revels I won’t review the place again (unless I go on the Predator Lake). I was also very fortunate (this time) to have sufficient bank space behind me to ship back, which is probably one of my only gripes about this venue. Everything, including the lakes are squashed in.  The tackle store as usual was absolutely brilliant and I could have easily spent a lot of money on various fishing goodies!

Accessability – **** (Sat Nav got a bit confused and told me it was on the right as I approached, but actually it was the left)

Disabled Access – *** (You may be able to fish some of the nearer lakes, with larger pegs, but the lakes further away from the car park would be difficult to get to by wheel chair as the paths are very narrow.