After speaking to the staff at Leeds Angling Centre it would seem that the further out of Leeds you go  on the canal the better fishing, so again using Google Maps, I found a small car park off Wyther Lane, near the Kirkstall Breweries. On arrival, there was definitely less debris in the canal, and at first glance I saw a small school of large (ish) roach moving up the centre of the canal. The weed, although still heavy seemed to be more controlled. After walking the bank, I decided against fishing in between the ducks and choose a spot opposite the main brewery building; it was a wider area of the canal and gave me a opportunity to fish 2 swims. 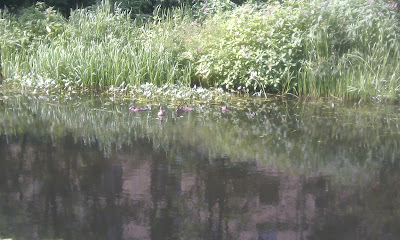 Plumbing up at 7.5 meters and again at 11.5 meters, the clarity of the water was such that I had no choice but to fish on the bottom of both swims at a depth of 4½ft at the edge on the central channel, and 3ft on the shelf on towards what would be the opposite banking. Baiting my swims with a mixture of Sensas Noire and Magic I waited and made sure I was completely set up, ensuring that all the cyclists in the world (it seemed like) had passed before I began. 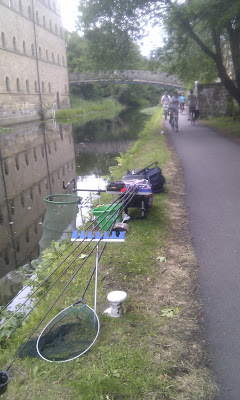 Using a single red maggot seemed to create a few chances, but I kept missing bites. I eventually struck into a few roach, although none were of any size. Still, I hadn’t blanked! After a frustrating 30 minutes of missing bites I started to analyse my own tactics to see what I could do or use differently in order to improve my catch rate. I switched down onto my lightest pole line of 2lb and a size 20 Kamasan B611 barbless (of course) hook, I hooked up straight away. This time it seemed as though the hook pulled through the initial contact. I stuck with this hook size for another 20 minutes until switching to a lower size 22 hook. The switch paid off catching a roach instantly. 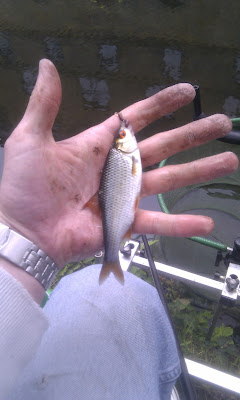 I was connecting more frequently now, alternating between chopped worm and red maggots meant finally I was catching quite a few roach and perch, but I also learnt a valuable lesson of using a small hook to connect with more of the fish, and obviously now I will make rigs accordingly, ready for my next visit. Below are some of my catch I snapped as I returned them to the canal. 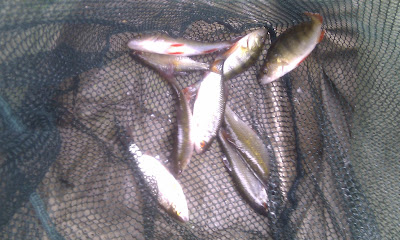 It was a very accessible location with a small car park just of Wyther Lane, and was generally a nice place to fish. Also with the canal being slightly wider it meant that alternating between the 2 swims would result in almost always having fish on the go when the other swim quietened down and needed re-baiting. I would certainly recommend it to someone who wants a few quiet hours trying to catch of few wily silverfish!
As a rating I would give it;
Fishability ***
Accessability ****
Value for Money ***** (Free)
Share