It’s always exciting when you fish a new fishery, and this time it was the turn of Swillington Park Lakes. Having fished various sections of the canal I fancied a change so I Google’d “Fishing in Leeds” and it popped up straight away! 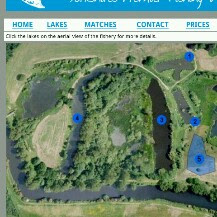 On arrival I had a walk around the lakes; there are 5 lakes in total some looking more established than others.
Lake 1 was quite busy, considering it was a Friday! It had quite a lot of margin features and a few small islands, but I didn’t want to compete with the 15 other anglers on the lake so I decided to look elsewhere. Lake 3 was certainly the most established lake and the biggest at around 2.5 acres. It is a lake I intend on fishing in the future (probably on the method feeder) however, today I was set on fishing the pole on a peg with suitable cover and unfortunately all the pegs with features had been taken. Lake 4 is a specialist carp lake and frankly I hadn’t paid the additional £3 to fish that lake so I steered clear of it. Lake 5 seemed to be the least established lake and although based on a “river section” it was very narrow, quite murky and seemed to be quite quiet, (although from the website it seems to be where all the matches are held), so I decided against it.
I choose Lake 2 in the end, it was a smallish lake of around 0.5 acres, with several large lily pad beds growing. I found a peg which had a large lily pad growing about 7.5 meters away, but it also had potential margin swims. 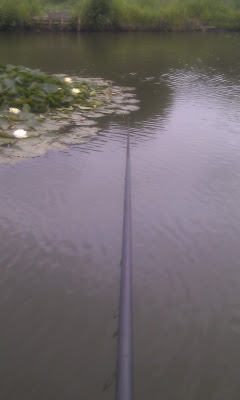 After setting up and plumbing up I was surprised how shallow the lake was, now more than 3 feet, I baited up my swim with ½ Crazy Bait Black ½ Lake 3000 some 4mm high oil pellet and a few corn cornels. After waiting 10 minutes and making sure I was ready to go, the first bait I tried was worm. Instant bite. Instant Fish. A roach, unfortunately the size of the fish is lost in my rather large hands, still it was a reasonably good stamp of fish to begin with. 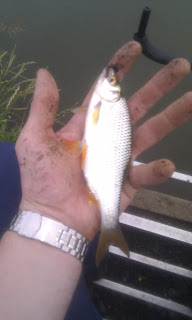 This was followed (using corn) by a nice Rudd. A few fish of this calibre followed one after another, until the swim quietened down and the tell tale bubbles began to appear. Having trialled maggots with very little success I switched to Luncheon Meat. Apart from a few big bags of Carp from Cefn Mably Lakes in South Wales my confidence in meat’s ability to catch fish has wavered, however today is the day I would forget that.
The float slips under, I’m into a fish , it releases about 12 inches of elastic but given that the water is quite murky I can’t see what it is. After a couple of seconds fighting the fish breaks the surface, it’s a small…. Barbel! 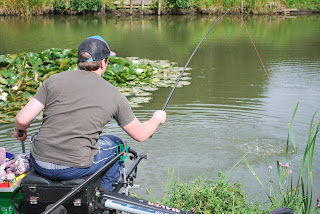 I’ve never caught one, and although I don’t entirely agree with having Barbel in a lake, I was over the moon at getting one in the net. I shipped out again using meat, after a short wait the float buried under, a reasonable Tench emerges this time. The fish are coming thick and fast now all on meat, at this point my faith in my little cubes of meat is rejuvenated. The next fish which falls to meat is a PB Rudd of over a 1lb. I haven’t mastered the “knack” of holding the fish to make it look bigger than it was, still I can’t complain. This was followed by another Tench of about 3lbs. 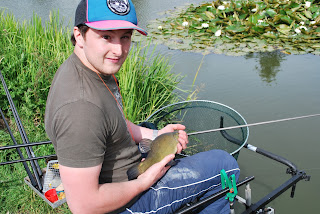 As the afternoon wore on the swim quietened down and eventually the carp took to surface feeding. Unfortunately I didn’t have breads or dog biscuits but I’ll know better for next time. One last time the float slips away, the elastic streaks out of the pole, I’ve connected, this is it, the one I’ve been waiting for. 3 mighty kicks were all I felt before the hook released. The fish was off. Apart from a few desperate attempts at catching a few surface feeding carp and that was my day done. 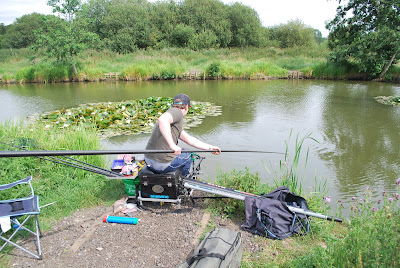 Despite it being a very eventful day there were a few annoyances, Firstly, £7 is a bit steep to fish somewhere which is isn’t spectacular and, if you haven’t got a trolley and fancy driving to the bank side it will cost you an extra £5, Secondly, no keepnets were allowed on the fishery. I think given the day I had, if I had a keepnet I would have fished with more intensity and tried to really bag up.
It was however a very good fishery and I would recommend it to any one for a good pleasure session. Infact I intend on going there again quite soon with plenty of meat and some dog biscuits. A little birdie also tells me that mussels also fish there very well.
So Swillington Park Lakes gets;
Fishability **** ½
Accessability ****
Value for Money *** ½
(I want to give it more, especially as I had a P.B, but, £7 is a bit steep for me, maybe it would have been a 4* had I not pulled the hooked on the fish!)
Until next time…
Share