After my session on the Viaduct the previous day and spending far too long browsing and chatting in the Revels onsite tackle shop I hoped the fishing was going to be live up to my expectations, as my confidence was still high after yesterday’s belter of a session. There was a match on one of the lakes at Revels, but the multitude of other lakes open to pleasure anglers. The fishery was set in truly beautiful surroundings and after a quick walk around I decided to fish the Crooked/Broken Tree lake. It looked quite promising with plenty of features, and after speaking to one of the anglers I decided that peg 10 is where I would set up camp.

The peg I chose was very spacious and flat, although some of the pegs near me were considerably smaller. The pathway to my peg was also incredibly narrow and I had to ask one of the nearby anglers to move his pole and roller before making my way past. My peg had A LOT of options. A tree out in front at 11.5 meters, rushes to my left at 13 meters, a disused drain to my right at 9 meters, and various open water swims. I was spoilt for choice! I decided to fish to the features and feed 2 swims – The tree out in front and the rushes to the left. I aimed to start on silver fish and later in the day try for some actual Carp rather than F1’s (there were no F1’s in this lake). As usual I plumbed up and shipped out, fishing dead depth with “old faithful” double red maggot. Some loose feed over the top and immediately I started get line bites. The float slowly slipped under and I was in to a lovely hand sized roach (dont be fooled I have big hands).
Shipping out again, still using double maggot it wasn’t long before the float buried under. Considering the speed the float disappeared it was only a small roach a few inches long, but it was obvious hungry! The line bites were increasing and any fish I caught on the drop were considerably smaller than any fish I caught if the bait made it through to the bottom. I grouped all of the stotz together so the bulk weight would get the hookbait through the small fish and to the bottom quicker. This paid off right away with some nice Roach falling one after another to a double maggot hookbait. The angler to my right was busy catching skimmers on corn, so I switched bait to see if I could tempt something slightly bigger. A slightly longer wait this time, but it paid of with my first skimmer of the day. The Roach didn’t seem to mind corn either and before long the fish seemed to be alternating between skimmer, then roach. Something more sizable then took my hookbait, and quickly found a underwater root. After a quick tug-of-war my rig came loose with a scale on the hook. Big fish would be difficult to get out from this feature… 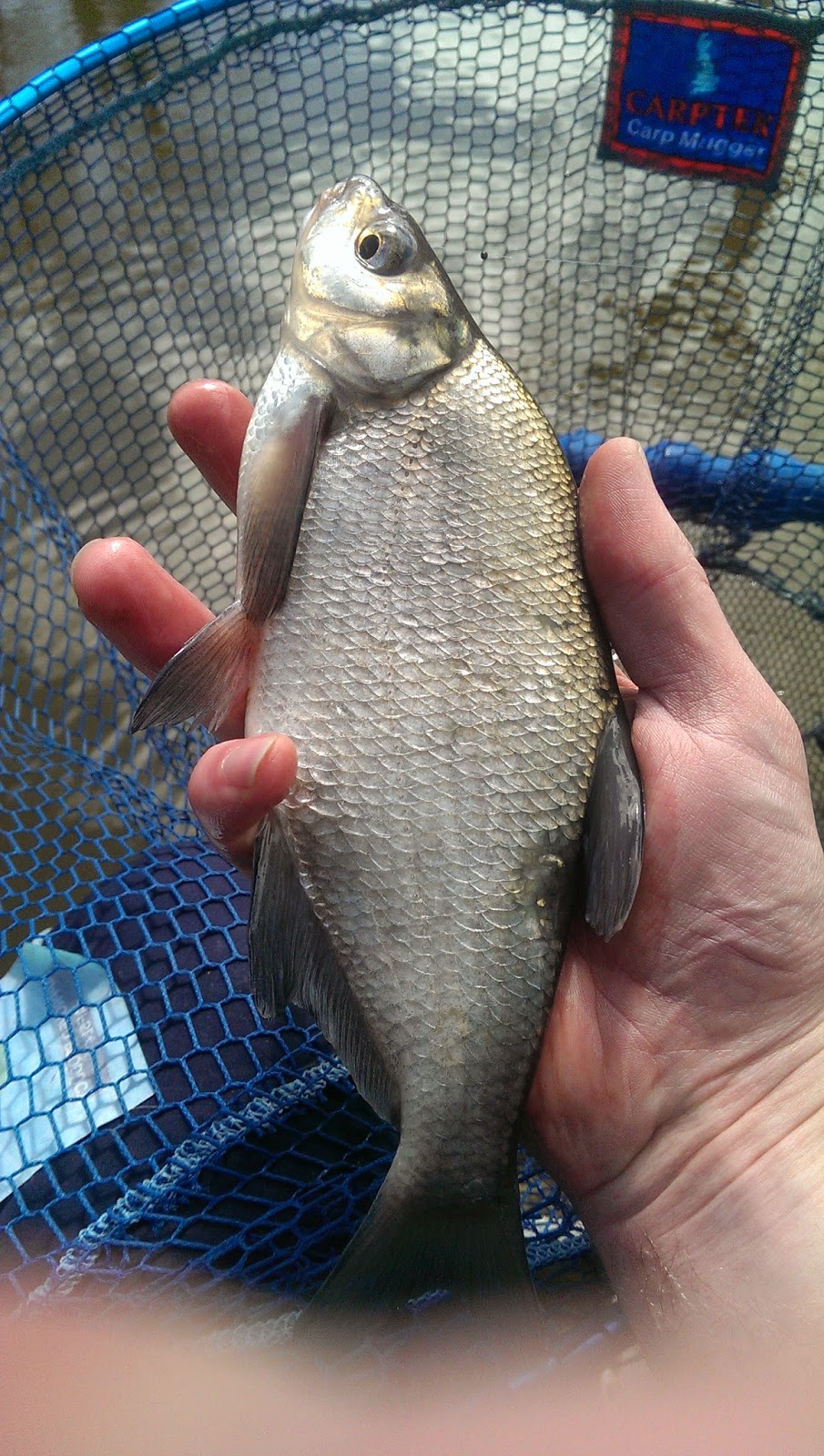 I scaled back for a while and continued catching a steady stream of roach and skimmers while feeding the other swim. As a pouchful of feed landed next to the rushes they started moving, being knocked from below. This was a tell tale Carp sign! So switching up top sections I shipped out a hair rigged 8mm halibut pellet and started the waiting game. I don’t know the average size of carp in the lake, so I would have to act quickly to pull them out of the rushes. 2 Minutes and a few extra feed pellets later and the float vanished under the water the elastic came out of the pole and I was into my first true carp of 2014. A nice fish of around 2lbs. 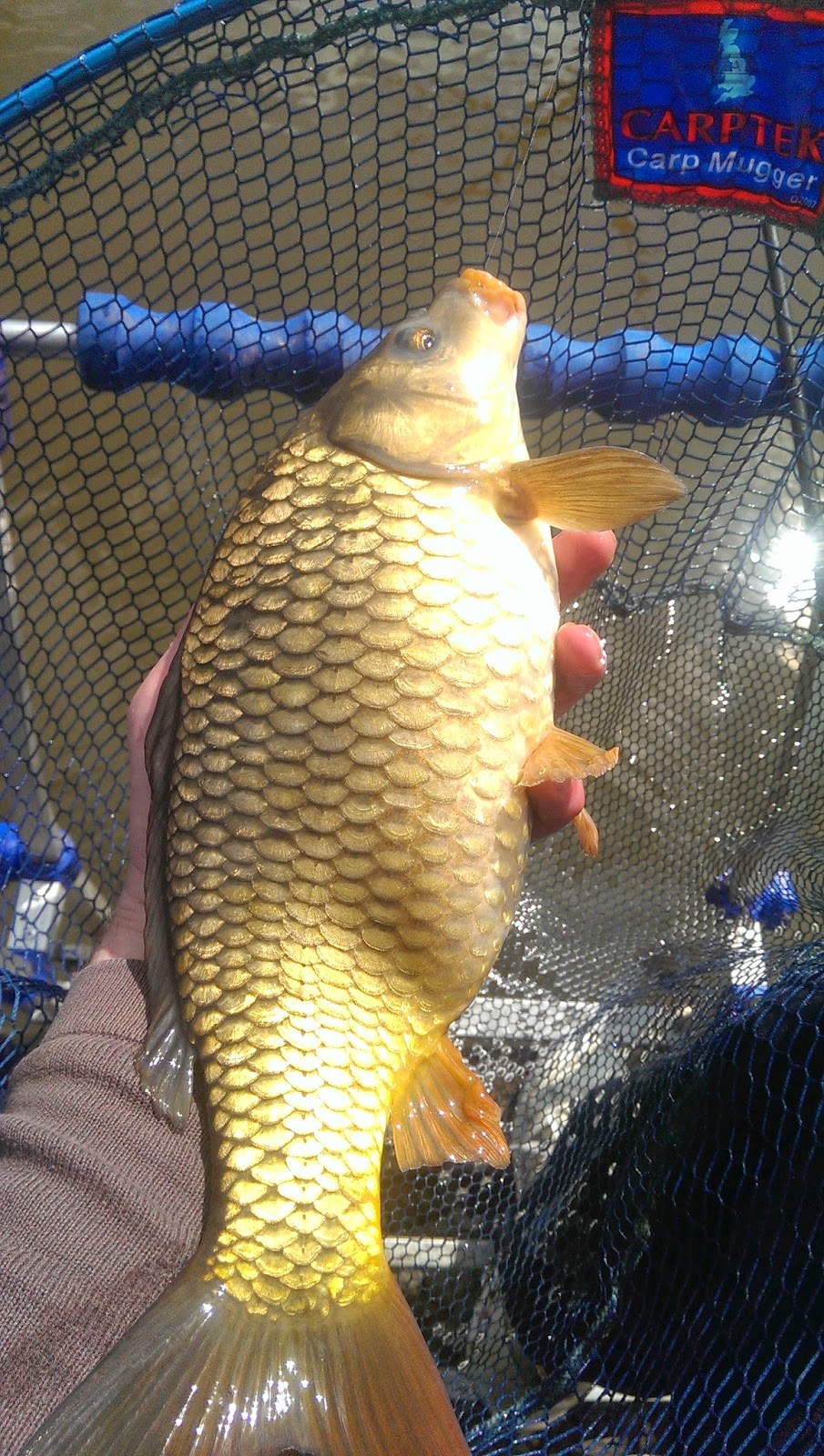 After landing this fish I quickly threw out another handful of pellets to keep the fish in the swim. The rushes were still getting bumped about so I shipped out and held the pole ready for another quick strike. I lowered in the pellet making sure my hookbait was resting “up the shelf”. A few minutes later I was shipping in another nice common carp of around 2lbs. The bites seemed to slow down after these 2 fish, and over the next 30 minutes I caught another 2 around the same size. It seemed as though 2 – 4lb’s was the average sized carp in the lake. After the fourth fish the swim went very quiet, so cupping in a selection of various sized and flavoured pellets I reverted to my previous swim. These fish were definitely still on the feed and within moments I was into a nice skimmer, which had taken a banded 6mm halibut pellet. 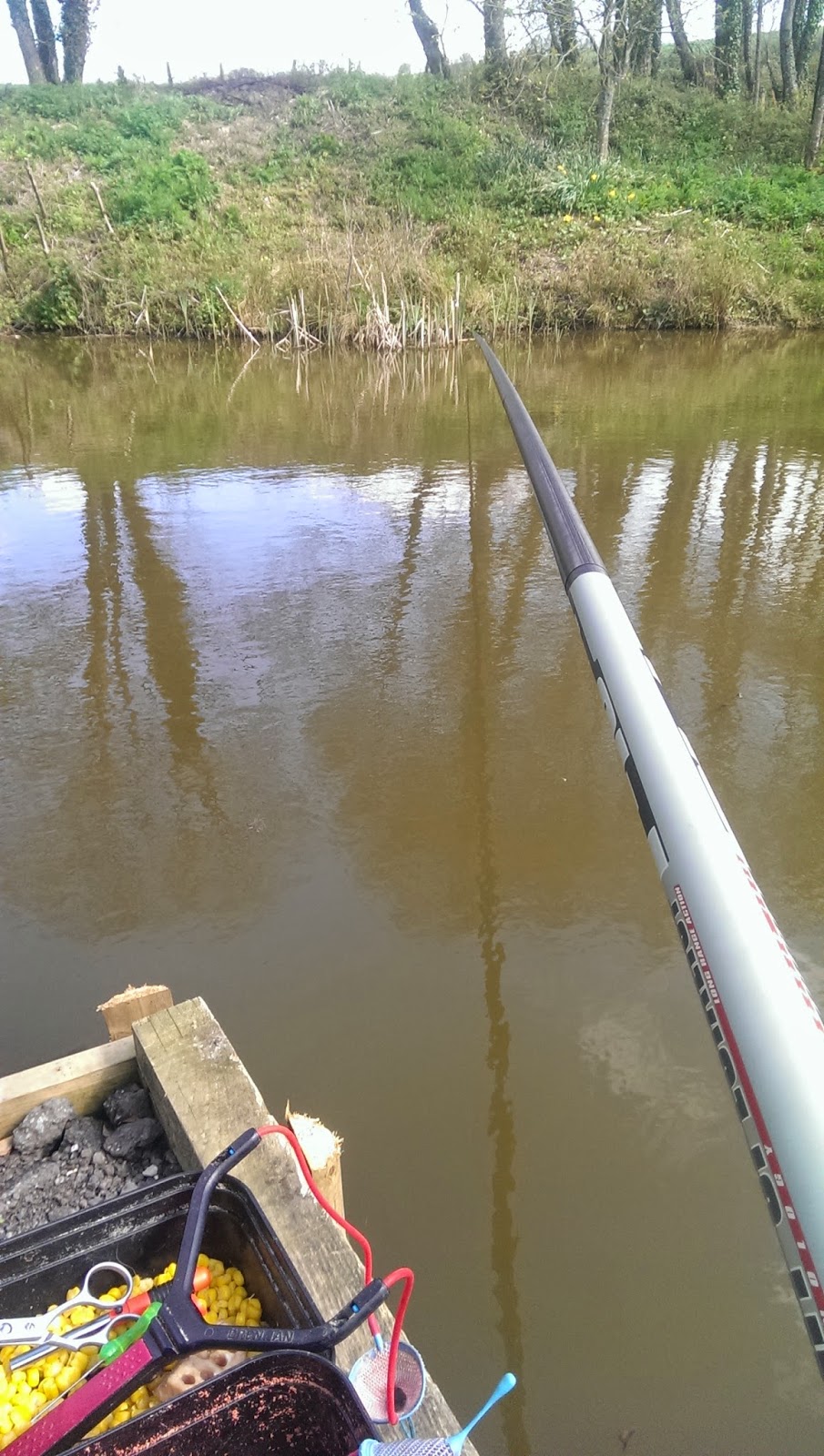 Alternating between the 2 swims for the last 2 hours meant I kept a consistent amount of fish coming to the net, and I managed another 4 carp (all caught on pellet or meat), a few quality roach with the occasional skimmer. I decided it to call it a day around half 3, but I was really impressed with how many fish I had managed to catch from this corner peg. Switching between swims definitely paid dividends and kept me busy all day. I was looking around as I packed up and a lot of anglers on the other lakes were all into fish of varying sizes – One of them looked to be landing a Barbel, and another was hauling in a nice common. 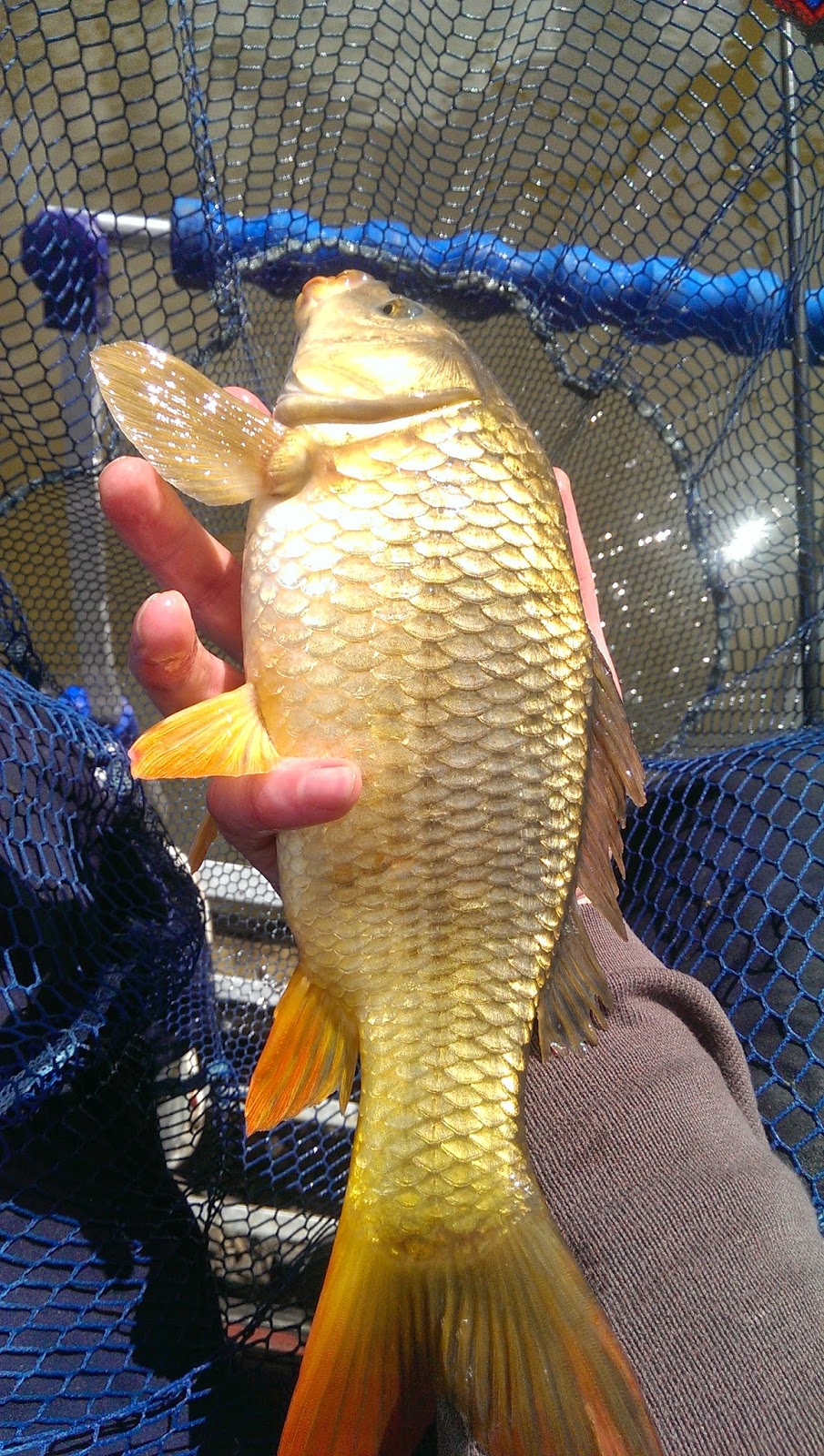 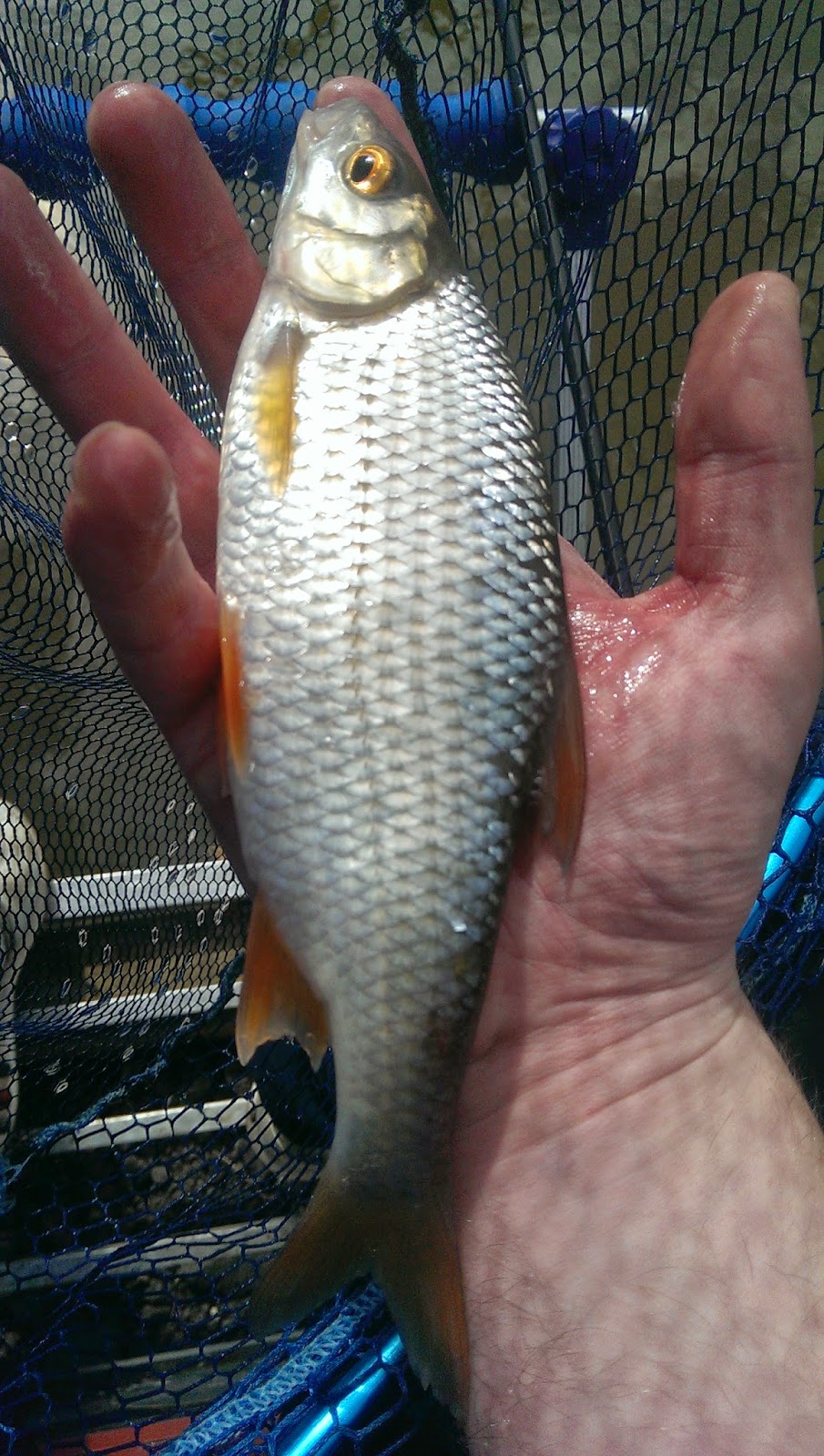 With the sheer number of lakes to choose from I will definitely be heading back to Revels. It was great fishing without being frantic action like the Viaduct or Cefn Mably. The majority of the pegs were comfortable and spacious, and although the pathways to the pegs might be a bit narrow at times there was always enough room at the peg once you got there. Crooked Tree lake provided great sport and I would wholly recommend it to anyone looking for a good days fishing.
As a rating I would say:
Fishability – ****
Accessability – **** (Sat Nav got a bit confused and told me it was on the right as I approached, but actually it was the left)
Value for Money – **** (£6, a great price for such a good days fishing)
Disabled Access – *** 1/2 (You may be able to fish some of the nearer lakes, with larger pegs, but the lakes further away from the car park would be difficult to get to by wheel chair as they are quite narrow. The lakes which are furthest away would be nigh on impossible to get too)
Share