In a working world of “week on week”, “year and year” and various other almost meaningless annualisation terminology I thought I would make my own annual observations. I had a few hours spare in the recent bank holiday. As I’m sure you’re aware little mini Murphy tends to monopolise a lot of my spare time these, so my habitual Sunday of sloping off for the majority of the day to test out various angling venues seems to have temporarily been placed on the back burner. Where I imagine it will remain for the best part of the next year or so. So when the chance came to wet a line, I snatched at it and decided to re-try Lyons Gate Fishing lakes. I had seen on social media that the Tench were start to appear, so I thought I’d give it a whirl, and see if I could catch a few, failing that, I would see if I could remember how to use my pole. 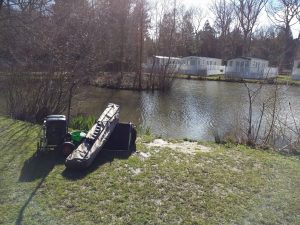 I arrived at the lake later than anticipated, however it was still quite quiet. There were 3 anglers at various places around the Kingfisher lake. and a couple around one of the venues other lakes. After walking around I did find it quite frustrating that some carp anglers (and probably caravan residents) had left their chairs on various pegs along the bank, with no gear in sight. Couldn’t fishing that area then… 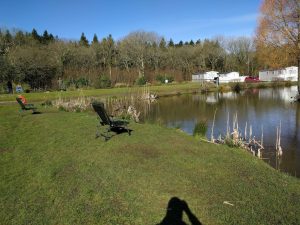 I crumpled and decided to fish the same peg I had fished on my previous visit. I knew how to fish it, I knew where the fish were and how to catch them. The number of silver fish in the lake hadn’t decreased, and despite the cool right the left wind, I could see shoals of Roach and Rudd whizzing about just under the surface. I had spoken to the anglers around the lake, “very quiet today”. I tried to find out why they were all fishing so far away from the islands. But after being told “There’s no need to fish closer” I left them all to it.
I would only be targeting the lakes resident Carp. The Roach and Rudd will take anything up to a 6mm pellet, which is the smallest pellet I had. So started small and would scale up as and when I need.
The 4 top 2 kits I would be using would have duplicate rigs on both
· Topkits 1 and 2 – 16 Elastic 5lb line straight through, size 16 QM1 – On a bait band and a 0.3g Rizov float.
· Topkits 3 and 4 – 14 Elastic 4lb line straight through, size 16 QM1 – With a hair rig and a 0.3g Rizov float.
I only had a few baits with me, some sliced Polony and luncheon meat, Sweetcorn, various hi and low oil pellets and some Paste which was defrosting. After arriving it was clear that this paste needed a bit of oil to bring it back to life, which I didn’t have. So this quickly formed part of my feed, as it just kept falling apart. First put in was with a 6mm oil pellet, and within seconds it sailed off and I was in to my first coarse fish of 2016. A small and greedy Rudd. I hadn’t even made it out to the island! This happened again and again, so on the 8th fish I switched up to a 10mm and shipped out to the island. From memory I knew the carp sat off the point (under a bush) off the island and the silver fish held in shoals to the left along the bank of the island. 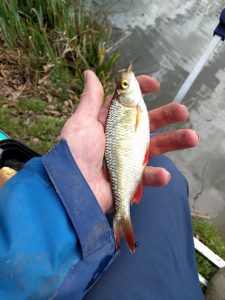 The float bobbed up and down and sailed off. I struck and the elastic ripped out, sadly the fight was short lived and the fish was off! Still, I knew they were there. I plopped in 2 golf ball sized lumps of feed and shipped back out over the top, this time with meat on the hair. The bites slowed right down and I had to wait 3 – 4 minutes before striking a positive indication. I was in, the fish tore off and tried to make a beeline around the island, but fortunately my elastic powered up and the fish seemed to stop in its tracks. I hipped in and landed a chunky carp around 5lbs. On shipping in noticed a Carp sitting in the margin to my left. I returned the one fish to the water and lowered another pellet in front of the unsuspecting fish. The silly bugger swam towards it and hoovered the pellet down. I was in to another fish within seconds of landing the previous one. This fish was really lively and making a bid for freedom while in the net it went back without being photographed. 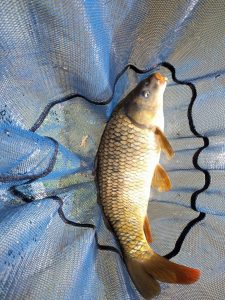 I switched to double corn and lowered the rig (this time to the bottom) and began to wait. To be honest i was glad to be fishing the margins on the top 5, there was a significant tow on the water and the right to left wind meant the holding the pole out to the island at 13 meters was testing when the gusts happened. A very ambitious Roach tried double corn, but fell off before it made the bank. Sticking with double corn, I shipped back down the margin and as the float settled, it disappeared under the surface and I was in again. This wasn’t a Roach, and the pink elastic shot out and this fish was desperately diving for the snags underwater. Luckily the fish swam straight out into open water and straight into genuinely straight into my landing net. Silly fish! This one was slightly smaller than the previous one, but put up a good fight, and after a quick snap was returned to the water. To be completely honest, I was making a bit of a hash of this trip and had tangled a few rigs. Also as I hadn’t been fishing for months I had also been neglecting rig making duties! So when I looked to replace my tangled rigs, I was replacing them with really random rigs which were made at some point over the last few seasons (not ideal).
The wind was starting to pick up, so I was only going to be able to fish at 13 meters for a short while (at the rate the wind was increasing). So swapped topkits, haired on a cube of meat and shipped out to the island. Holding the pole steady was beginning to become an issue and my spray bar was being as useful as a bottle of crisps. I decided to hold it steady, it would also mean striking would be much quicker. Some of the bites I had were quite finicky. The wind seemed to have had an effect on the fish as I had to wait about 10-15 minutes (combined with some meat jigging) for my first proper take. It was another Carp around the 3-4lb mark. In the process of landing the fish I seemed to have spooked a shoal of Rudd which jumped out of the way of the charging Carp. 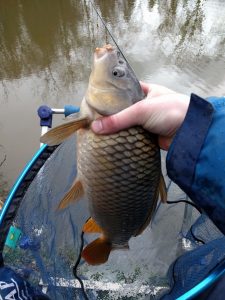 I will say, the majority of the fish in this lake are in immaculate condition and the initial surge is like a flipping missile! I returned the fish to the water and carried on fishing, but the action seemed to be slowing right down. I managed one more Carp (around 3lbs) and several silverfish on a corn skin fished down at my feet on a top 3. After another hour I made the decision to call short my trip, in favour of some early lunch and family time. Still looking around the lake I hadn’t seen anyone else catch, and as I left I was asked how I’d got on and why I was leaving so soon. Disbelief certainly crossed the other anglers face, as he was yet to catch, but I told him to fish closer to the islands just before I wheeled off to pack the car. As I drove off I saw him recast his float line towards the island, I hope he caught.
Anyway, it was nice to get out of the house and use the pole for a few hours. Hopefully I’ll be able to get out again over the coming weeks, and am really looking forward to fishing a few new lakes and new areas of coastline that I have been researching through the darks depths of winter. All in all Lyons Gate didn’t disappoint, and a 4 Carp and several silver fish over a couple of hours seemed like a reasonable return for my efforts. It’s a venue I would recommend to anyone who is looking for some easy fishing (especially targeting silverfish), though I’m not certain that the lake holds these elusive 20’s that I’ve been told about. Also I think the day ticket has increased by £1 to a fishery average of £6. Still worth every penny.
For a full rating, please click here..
Share