After the silver fishing bonanza on Dillington Pond the previous day, I was itching to get out and trial another of the closed season venues the Ilminister Angling Association had to offer. The Ilminster Canal is a 150 yard closed section of the old canal, which contains a myriad of fish. I have read that it contains specimen Roach and Rudd, Tench, Perch, Carp and after talking to a club member 1 rogue Pike! Arriving at the venue the parking was a bit tight, but you could easily park in the surgery and walk around. 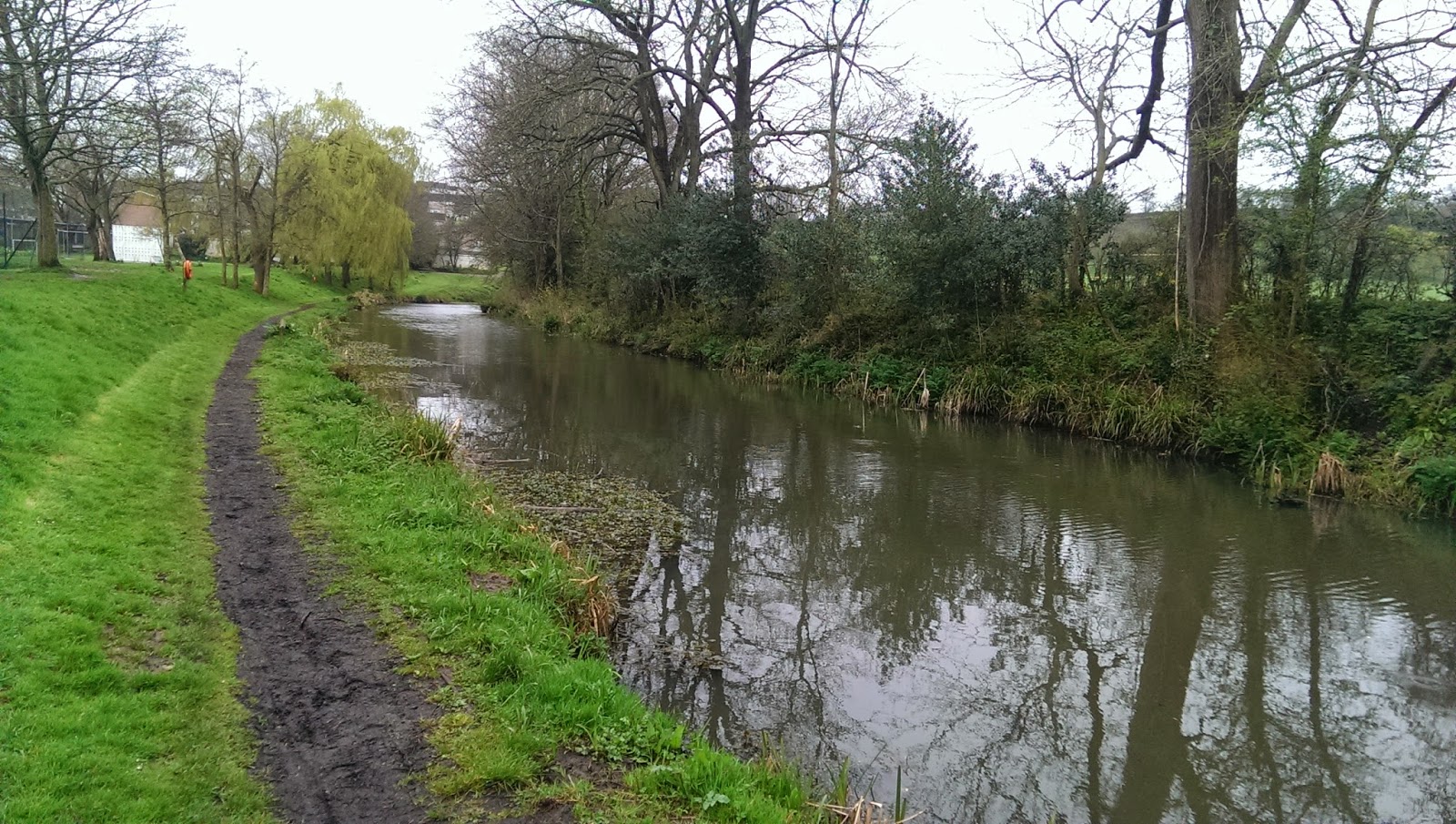 The venue looked very fishy, and despite the awful weather the reeds on both banks were beginning to grow back. I walked the length of the stretch and could only make out the occasional peg. With that in mind I set up camp ¾’s along this stretch, towards the embankment. The peg had loads of options, with the far bank being roughly 12 meters away, there was a tree stump to my right at 11 meters, mid channel at 6 meters and down the sides having access to both margins. After my previous evening making roach rigs, I was shipping out and plumbing up in no time. It was deeper than I expected, but the weed growth was not just confined to the banks. Anything closer than 1 foot off the bottom resulted in weed hook ups. Fortunately it was dead, and you could easily pull out of it without losing any tackle. But it did mean I wouldn’t be able to fish dead depth as planned. 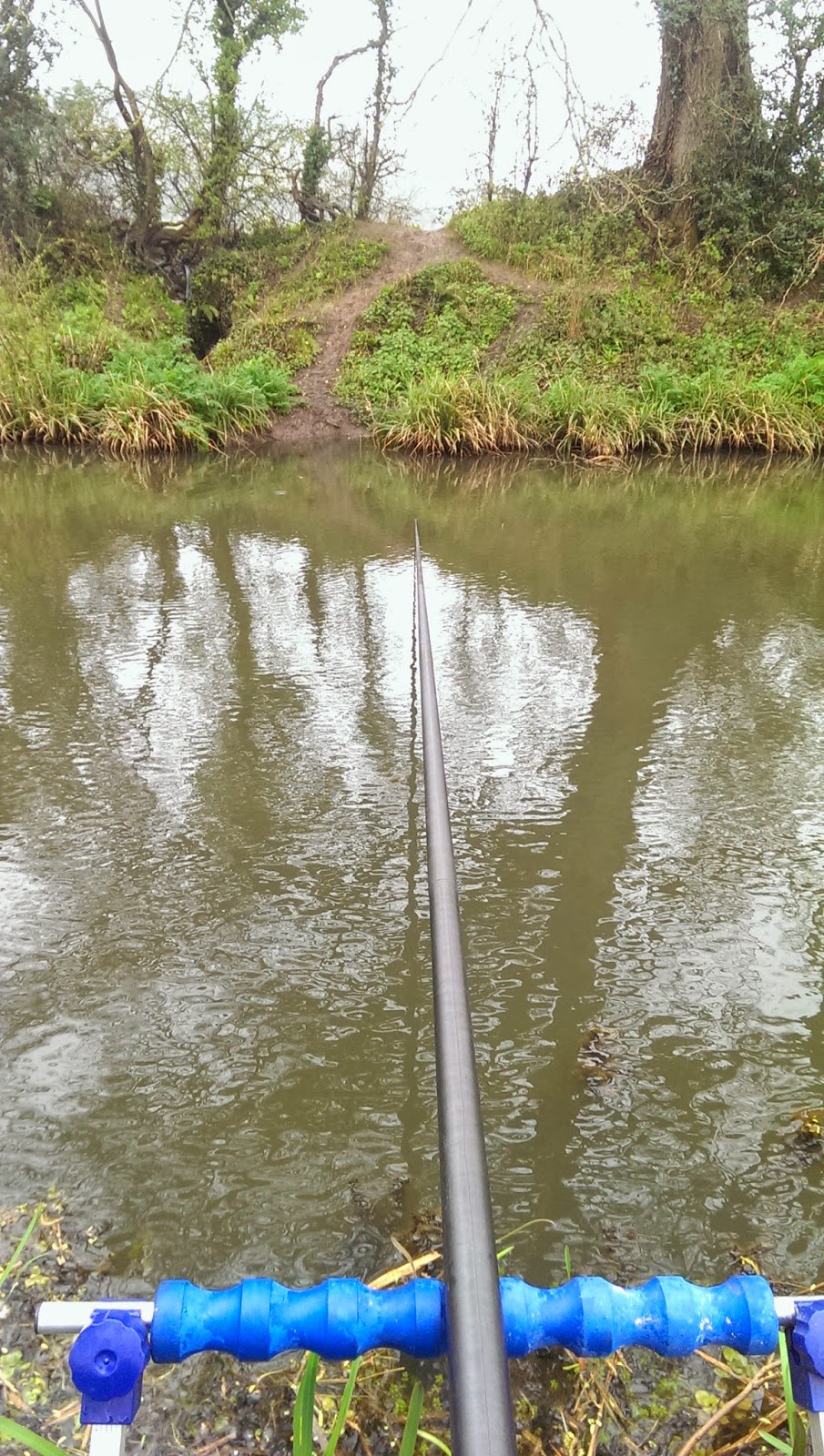 Shipping out with “old faithful” double red I plumbed as close as possible to the weed carpet. A few handfuls of maggots and casters, and very slowly the float started to bob up and down. Striking, I hooked into the smallest Perch I’ve caught in a long time. Fin perfect at 3 centimetres long. If only I had hooked into his 2lb cousin! Still, it wasn’t a blank, and it was my first cast.
Shipping back out again with double maggot, the wait was a bit longer. The introduction of some free maggots meant that this time I caught a small Roach. The bites were quite timid and after catching 8 – 9 fish, I scaled down to a long shanked wide gaped 18 (looked more like a (20-22), decreased the depth by 6 inches and began using single caster to try and identify where the bigger fish were hiding. The slow but constant trickle of maggots and casters meant the fish were consistently coming to the net, with the biggest fish registering around 1/2lb. 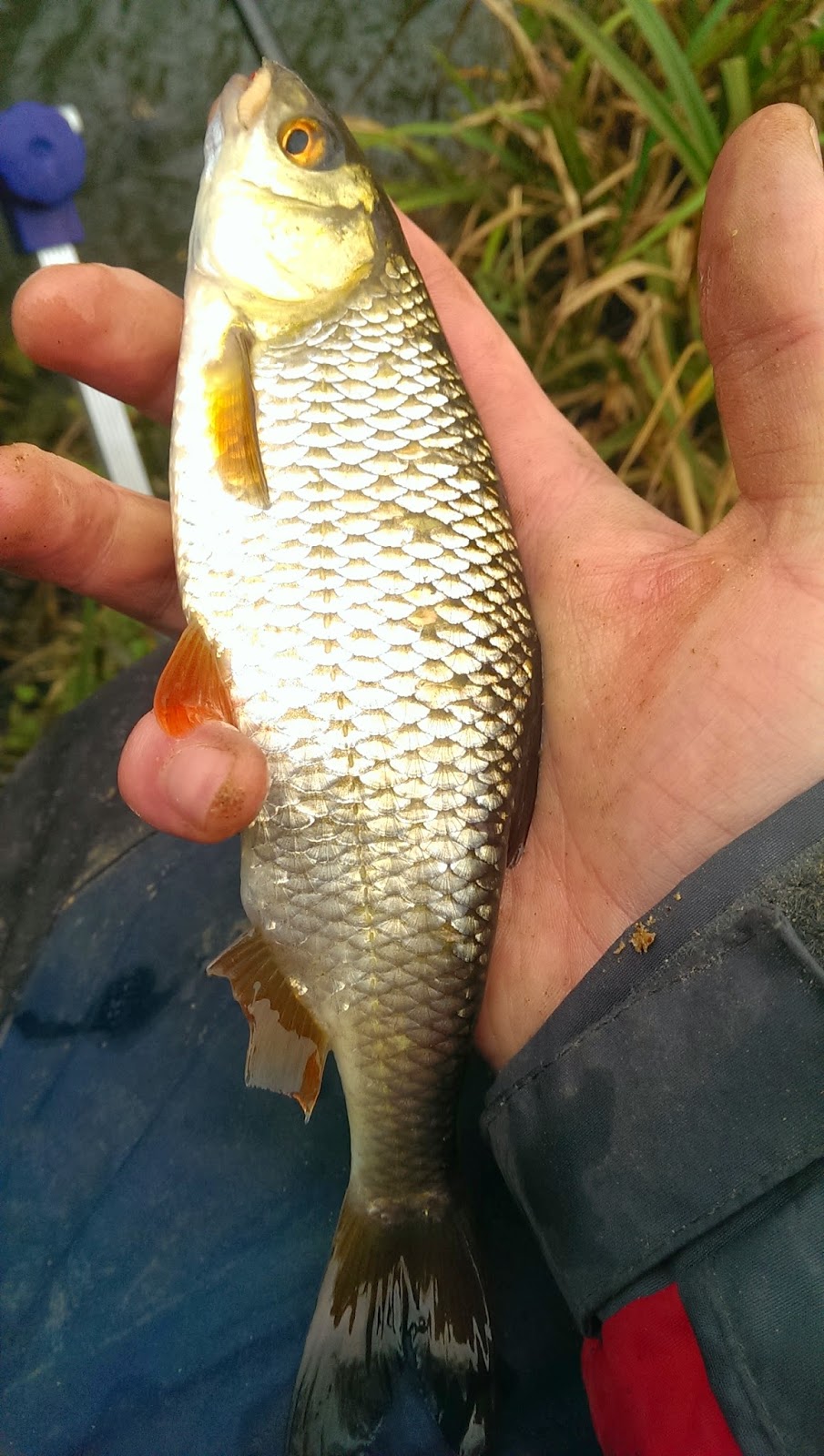 At this point a club member by the name of Andy started talking to me, and he briefly explained that bread punch was doing well at the moment. He also said that there were plans to stock the canal with 300 F1 carp, but the EA needed to approve a sluice gate beforehand. He was quite pleased to see a new member of the club, wished me well and went on his away. As soon as he left, I reached into my holdall, pulled out the sandwiches and the bread punch. Although I caught on bread, the bites were a lot slower than on caster and the size of the fish was not different. So after 10 – 15 fish, I shipped back out on single caster. I fished for the next few hours steadily increasing my catch rate, and trying out my various swims. Fishing close to the tree stumps provided the quickest bites of the day, but the gusting wind meant it was a fight to prevent any tangles. Switching to pellets for the last half an hour in the attempt to catch a carp or tench (whilst hastily eating my sandwiches), I didn’t manage to tempt one. The wind was steadily picking up and the rain was starting to fall in a fine drizzle, so I began packing up. 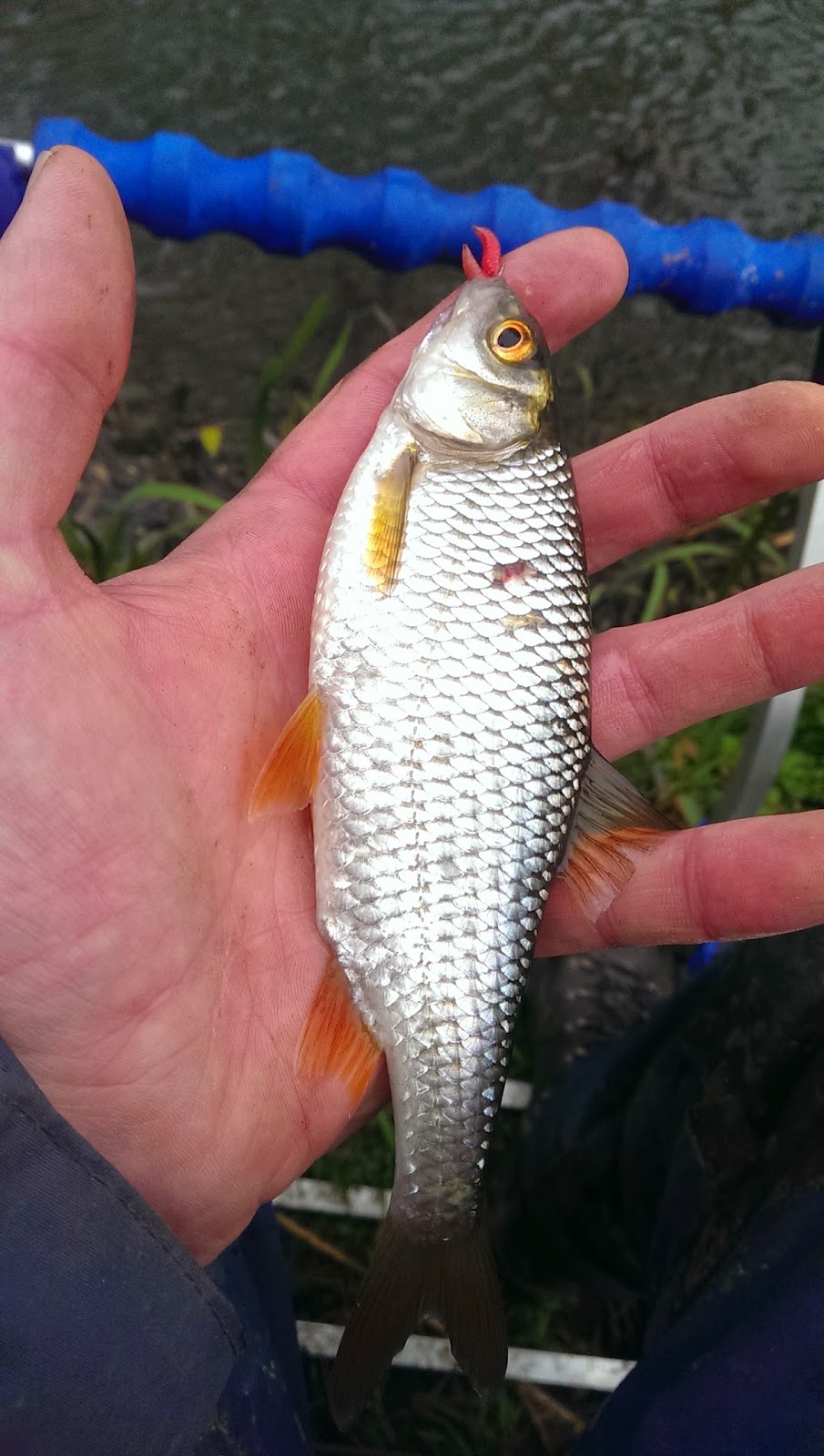 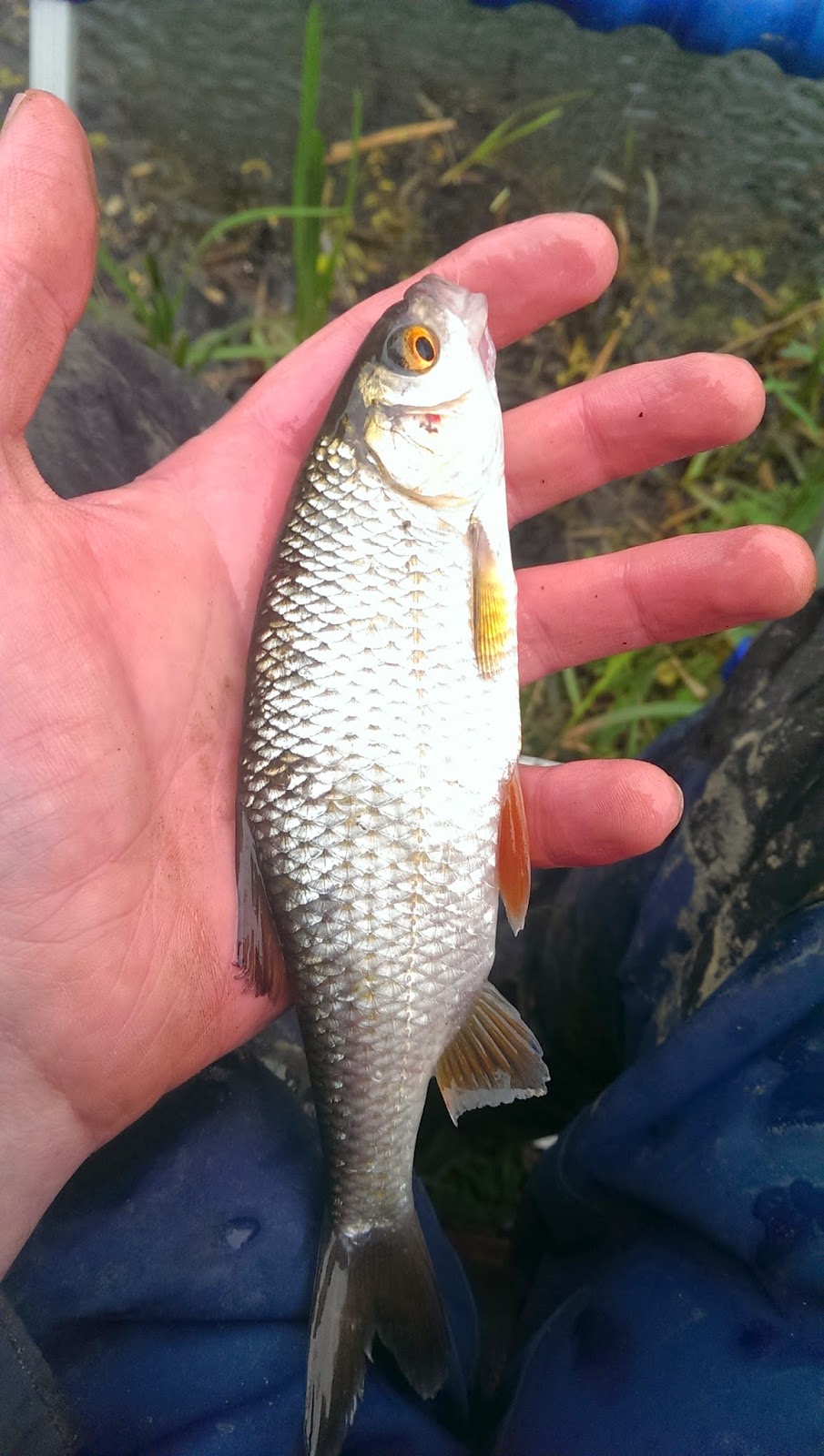 Whilst packing up another club member was walking up the bank. A chap by the name of Ned introduced himself and we began chatting about the best pegs, best baits and time of year to catch them. He too seemed pleased to see a new face on the bank, and before long he was telling me about the future stocking plans for the canal and Dillington Estate pond, as well as the match series that takes place over the summer. Heading back to the car Ned began throwing bread in to try and tempt one of the Koi carp he had seen earlier in the day. Seeing the fish move around, I had clearly been fishing in the wrong place if I wanted Carp… (Will know better for next time).
All in all it was a great venue, and having fished 2 venues in 2 days the license has nearly paid for half of itself already. I will definitely be returning to this venue as I think it has a lot to offer. From specimen Roach and Rudd, timid Tench to crafty Carp. I was also pleased to see such active club members, who were clearly very passionate about their club and the waters they could fish.
As a rating I would say;
Fishability – *** 1/2 (The conditions weren’t great but I put together a few pounds of Roach and Rudd)
Accessability – *** 1/2 (The path is flat and the parking is good (remember the Surgery) but there aren’t that many defined pegs)
Value for Money – FOC (Free for club members, no day tickets available)
Disabled Access – *** (Might prove difficult on your own, but certainly do-able with someone helping out)
Share