I have been very keen to find a venue in my region (Somerset) which has a few Tench, and after a bit of digging around I had uncovered a place which specifically stated Tench, Rudd, Roach and Carp on the website. Also, as it was a new venue I was quite excited at the prospect of having a Tench venue less than 15 minutes from my doorstep. Finding the venue wasn’t that difficult thanks to Google maps, although there was a moment where I found myself driving through a farm without seeing any form of a sign for the 3 lakes. I arrived at the venue just after half 9 (a bit later than anticipated) and after parking up I had a quick walk around to choose where I would be fishing. Of the 3 lakes at the premises, 1 had been booked for 2 days for a competition. I spent half an hour or so speaking to locals and decided I would fish the first lake this time and fish the bottom lake on my next visit. When asking about the Tench in the venue I was quickly told that if they were in the lakes, none had ever been seen or caught…

There is no specific car park, so after re-positioning my car between 2 others I unpacked, loaded up my trolley and began heaving my gear towards my chosen peg. I also noticed a group of kids being dropped off by their mother, and was pleased to see younger anglers taking up fishing. In all honesty I made a bit of a meal choosing my peg as there were 3 I wanted to try. A father and son opposite were hauling carp out of the rushes on floating bread. I could have cut another peg out (as there were no specifically marked pegs) on the opposite bank, but in the end I decided to fish towards the small island at 11.5 meters, have a roach line at 6 meters and a margin swim to my left. The margins in this place were quite clearly heavily fished and I could see a lost hooklength hanging from a branch to the left of where I was fishing. The lake at this point was quite quiet, so if I had a chance I would also lob a sleeper rod out to the far end of the island (about 19-20 meters away) and see if I could snag a few bonus fish.

I’m often surprised how shallow some venues are and before long I was shortening my newly tied rigs from 5 feet down to 2 feet and 18 inches in the margins. Setting up was a long winded process and it seemed as though a lot of people who walked past me to fish the top lake, were also unaware that it was booked. So I ended up moving my gear out of the way to prevent any breakages. I balled in 2 tennis ball sized handfuls of Bait Tech Go Pro Natural before starting. I’m starting to have real confidence in this groundbait, it seems to tick all the boxes and pulls in a lot of fish. It may even replace my all time favourites of Crazy Bait Black and Crazy Bait Gold. Shipping out on this new venue I hooked double red maggot (old faithful) and as I shipped out I noticed a flicker of silver chasing my bait! It wasn’t long before the float disappeared and I was into the first fish of the trip. A small Roach, this was followed by a slightly bigger Roach and after altering my shotting pattern a stream of Roach, all of which were feeding on the drop and getting progressively closer to the bank. Within 30 minutes of fishing I had adapted my rig to fish at 4 meters, whip style and was quickly putting a small bag together with fish averaging 1 1/2 – 2 ounces a piece. 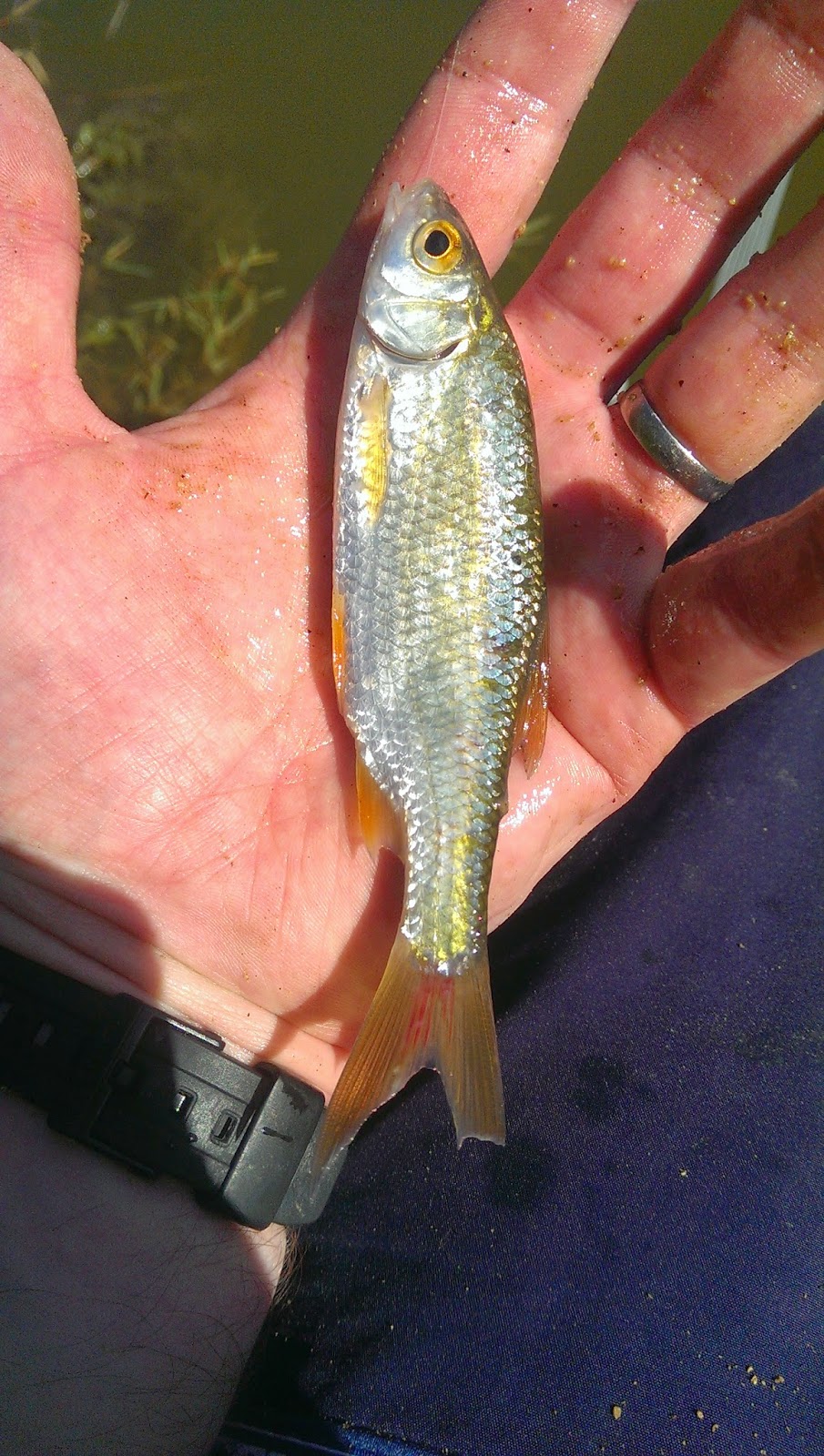 There was no shortage of Carp in this lake and although they rarely went above 6lb (there are the odd few that reach 10lb), there were plenty being caught by the 2 anglers opposite. Bread seemed to be doing the business and by the end of the day they had at least 25 Carp between them, ranging in size from 1lb to 4lb. I could see a few fish moving along the island, so I quickly set up my sleeper rod and cast out. Within 30 seconds the trip whipped around and I was into my first Carp of the day. Surprised with the results, I rebaited my hair rig and cast back out, another 20 seconds past when I had a proper knock on the rod tip, but nothing more materialised so I continued setting up my Carp rig on the pole. 8mm Halibut pellet was my first bait of choice and although I had a few liners, I had to wait a few minutes before another Carp took the haired bait. This one kited off around the other side of the island, but after its initial surge the 16 elastic pulled it back around and before long I had a carp of around 2lb’s in the net. I could also see a fish churning up the bottom in my margin swim, and dropped a few more pellets in to keep him interested. Before I could ship back out the sleeper rod hammered round and I was into a carp of 4 1/2lbs. This maybe turning into a feeder only day. I continued on the Pole and landed 3 more carp all between 2 and 4lbs, and although the silver fish weren’t of a similar size to my last session at Water meadow, there were coming in very steadily when fishing maggot and casters. This was turning out to be a great little venue (despite not seeing a single Tench), and by 2pm I had managed 8 Carp and a solid bag of silver fish. 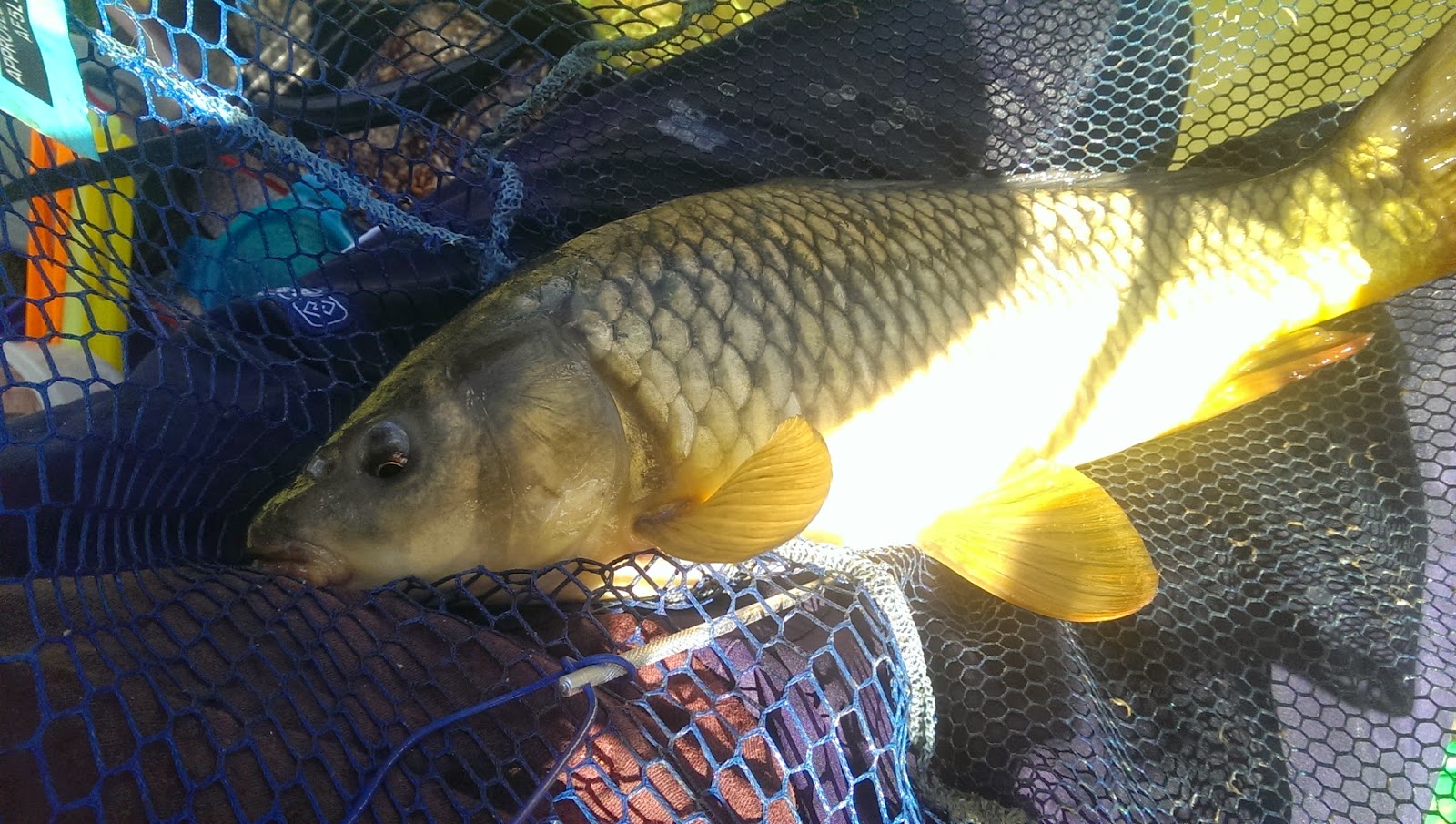 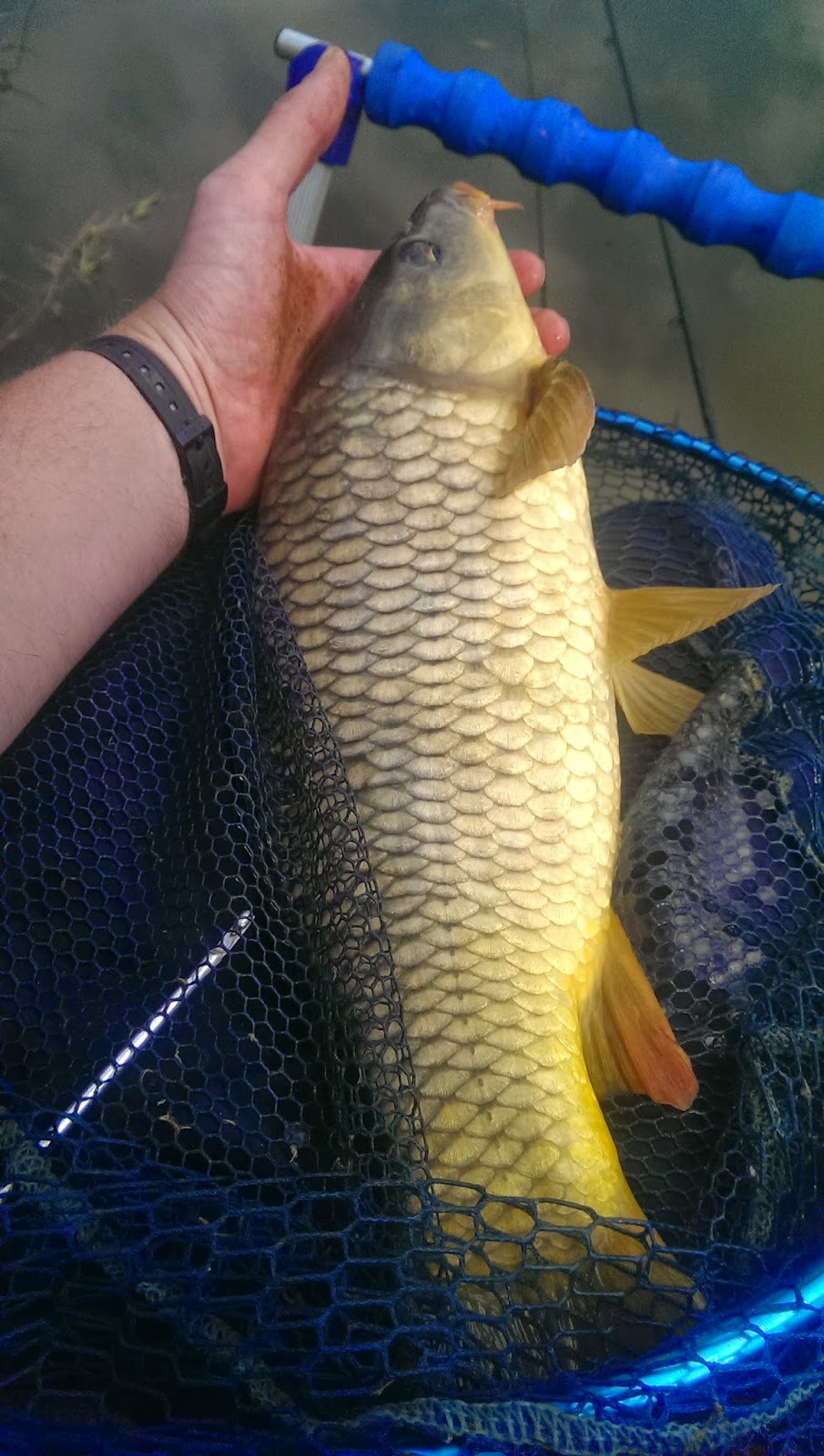 It was as I struck into my last carp of the day that I noticed the 3 boys who had been dropped off by their parents heading up to fish the lake I was on from the one below. Apparently the one they had just been on was “Fu**ing sh*t”. I could over hear (as could everyone else on the lake) their conversation and for boys who had to be aged between 12 – 14 they had a fairly extreme social life of boozing and partying. Then the fun began… Not wanting to sound like a grump, but I should explain, it is only a small lake, and anything other than an easy lob would end up in the lake beyond.

The Red dot on the bank was my peg, with my 4 feed locations (Margin, 6 meter line, Island swim and Sleeper). The white dot represents an empty peg (which remained empty all day) roughly 4 – 5 meters away. The yellow dots then represent where the 3 boys that were fishing 2 rods (each) and the dots in the lake and corresponding pink pattern were where they cast and fed. Furthermore there was no pattern to their feeding, and unfortunately it was thrown in overhand, which meant half the feed fell short of the desired location. I cannot convey to you how much feed to boys used, but it was easily upwards of 5 kg’s, whether it be particles, groundbait, pellets, loose boilies, or chunks of meat. It made me wonder, where on earth these boys got their advice from? I floated the question online and the answer was immediate. TV and more specifically “Thinking Tackle”.

If that’s what TV angling is teaching the younger anglers among us then I’m glad I don’t watch it! They initially cast over the angler opposite, and then proceeded with a shotgun approach of angling which after 30 – 45 minutes of potluck casting landed their 2 ounce bomb directly on top my sleeper swim, spooking a fairly large fish in the process. That being said, it was an impressive cast, as they managed to cast over the edge of the island! At this point I had to politely say something, and after a few grumbles the boy wound in and cast about 3 feet off the swim. Sadly the damage was already done, and after an hour all carp near the island had moved off.

The casting inaccuracy continued and 2 casts later and the sleeper swim had 2 baits in it. I wound in my sleeper line and decided I should concentrate on the pole for the latter half of the session. The occasional fish could be seen moving around the margins (one of which I lost on meat) but I had to content myself with roach for the last hour. It was quite enjoyable catching the Roach although I didn’t manage to hook a fish over 4 – 5 ounces. I did flirt with the idea of trying to catch the Carp churning up the bottom in the margin, but after a few sniffs around my hookbait it swam off towards the reed bed. 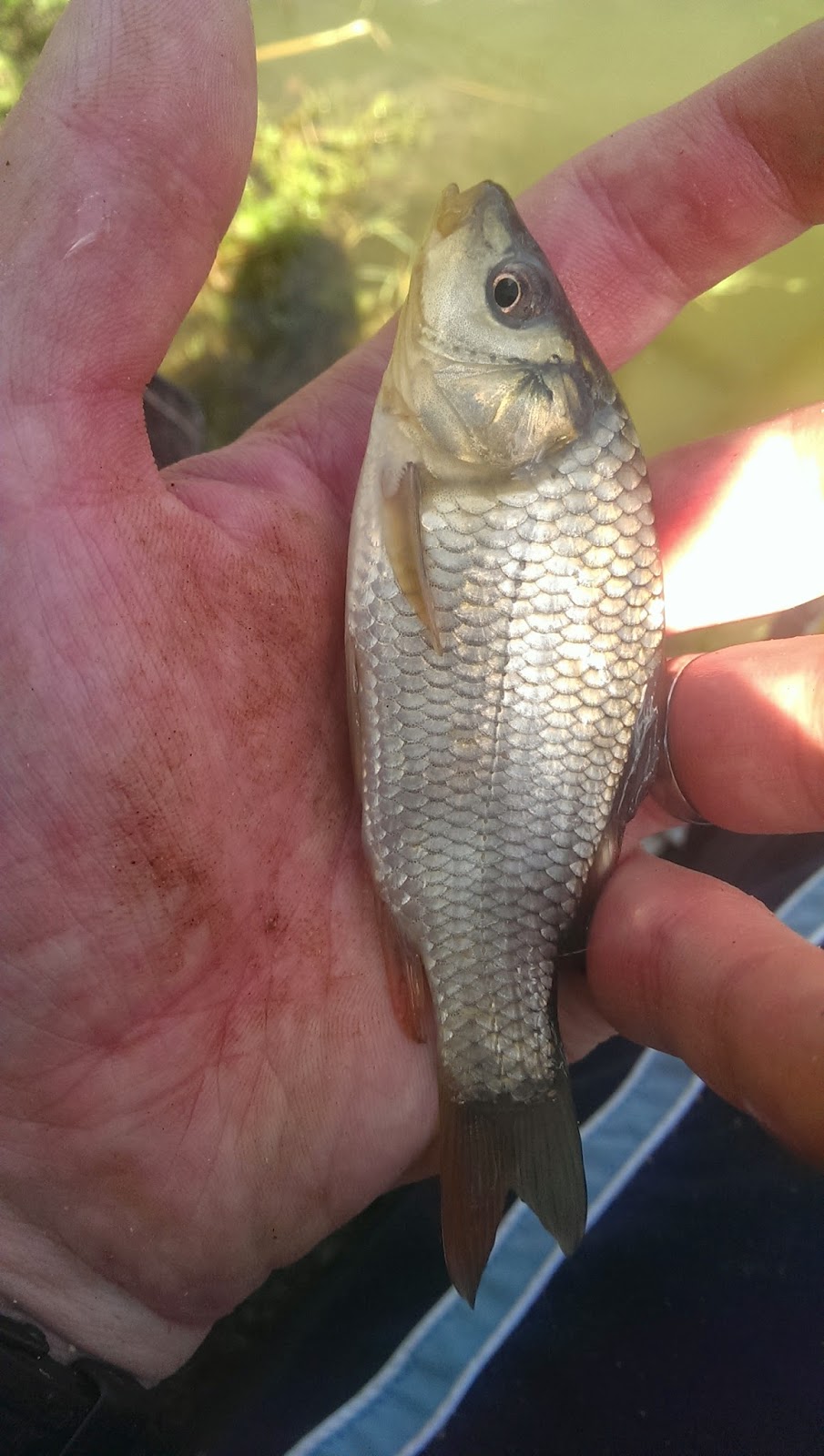 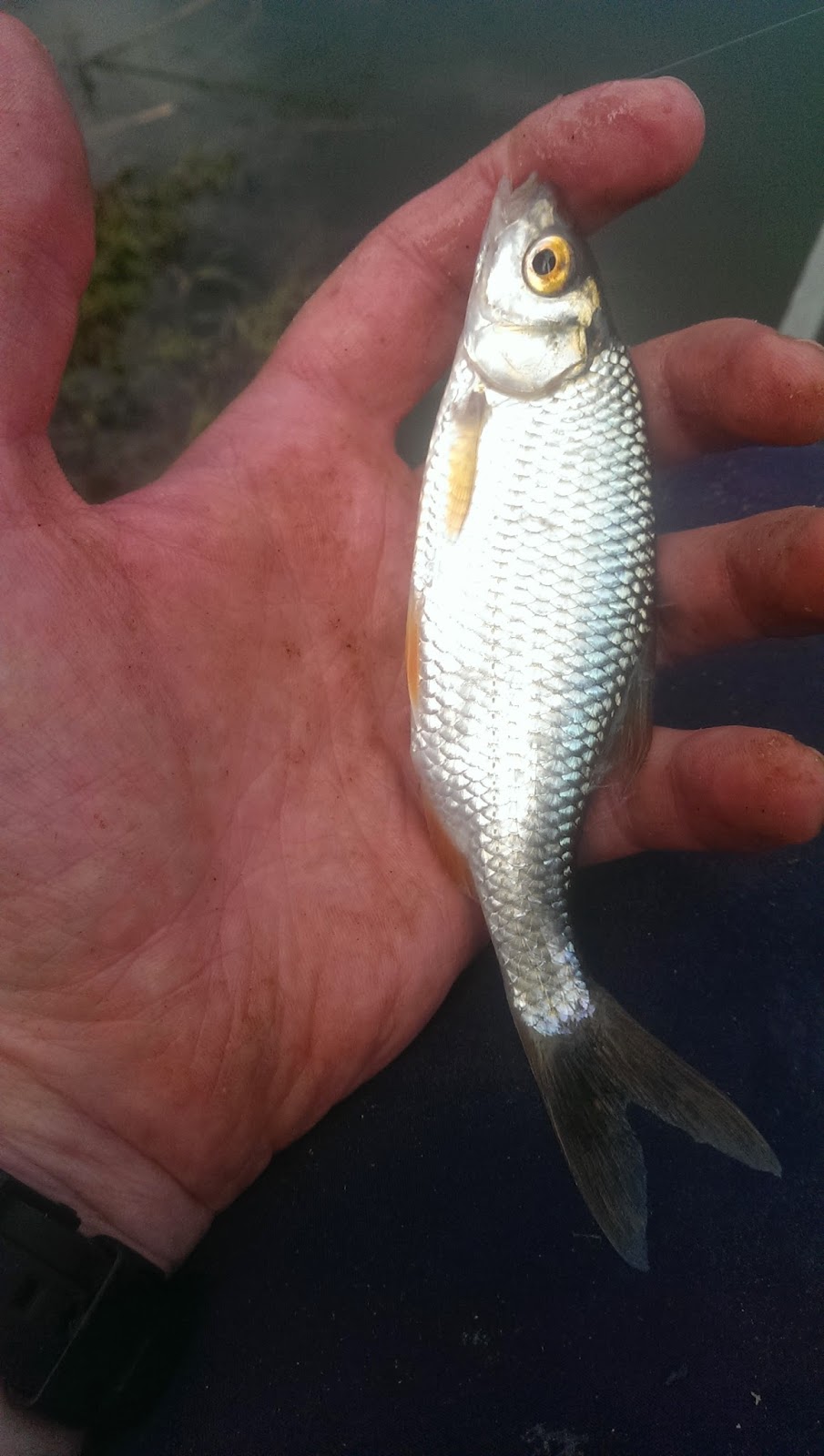 I called it a day at around half 4 after finishing on 9 Carp and a reasonable bag of silver fish, but to be honest was quite annoyed by the boys opposite. Highlands is a nice fishery, with no shortage of fish (no Tench though). Being so close (and seeing how easy it was) I may take a trip out there before it really cools down to try and catch a few carp off the surface. The lakes themselves had reasonable access, but would not be Wheelchair friendly. Some of the pegs are individually marked but some are just gaps in the foliage. On the plus side you can park quite close to areas of the lakes, so with some assistance you should be able to get close to the water fairly quickly. I will definitely be returning to Highlands, especially as there are 2 other lakes to fish. The lake I fished is full of little silver fish and from my quick walk around the bottom lake, that had a good head of silver fish too! If you are after a reasonable days fishing for a very bargainous £5 then head on over the Highlands, as you are sure to catch. But get there early to ensure you get the most out of your peg.

Fishability: *** ½ – Looked quite fishy, but is obviously heavily fished and over fed, which kills the fishing straight away.

Accessibility – ** ½ – Be careful with the postcodes or you’ll end up driving into the other Dairy Farm up the road. Use Google maps, and aim for the 3 lakes. Also, there is no specific car park, so finding spaces on a busy day could be a free for all.
Value for Money – **** £5 – Cheapest place I’ve paid to fish for a while.
Disabled Access – ** – There are grass paths around the lakes and access to the lower lake is better than the first 2, but assistance would definitely be required.
Share