I’ve driven past this venue several times on the way to and from Bridport, but have never had chance to get down to the water and check it out. With a Sunday going begging I decided to give it a try, especially as this venue is only 12 minutes drive away – Ideal! I must say that the Google Map search beforehand didn’t look too promising. The satellite images showed a ditch still being dug, hopefully it would be more inviting when bankside. Arriving at Potwell farm and making my way down the lane to the lake I was surprised at the size of it. To be honest it’s a bit of an odd shape, with defined pegs all along the right hand bank but no pegs and limited access to the left hand bank. There was also a small section of the lake which can only be accessed by one peg (not marked), and even then accessing the pegs full potential would be difficult because of the angle of the bank. The lake itself has few features, and can’t have been in existence for many years. The position of the venue (on top of a hill) meant the wind was surprisingly strong (as it was today a solid 15-20mph wind in the face).
Unless I could get down and under cover fishing the pole was going to be out. I eventually found a peg down a steep banking (it wasn’t a marked peg, but I was the only angler all day, so no one had any objections) with a fairly large lily bed, leaving me 2+2 from the lilies with 2 margin swims either side.
The banking around the lake was flat so wheeling my gear over was fairly straight forward, it was however quite tiring when setting up. Lowering and hoisting my gear down towards the water onto questionable looking ground was a challenge, but being the most promising looking peg on the lake I wasn’t going to be put off! I did have to re-adjust and move my box twice as it slowly sunk into the clay (must buy mudfeet!), but on the third attempt I was in, set up and settled. I plumbed the depth and despite the margins being only 12 inches at the shelf, the lilies had a depth of around 3ft. I made up some Baittech Pro Natural and continued setting up my rigs. I would be fishing 3 rigs – with the intention of concentrating on paste which I would make up as and when required.
·         Set up 1: Middy Hi-Viz 8 – 10 Elastic – 0.10 – 3lb Matchtek – straight through to a size B611 size 16
·         Set up 2: Preston Fluoro 14 Elastic – 0.13 – 4.12lb Reflo – straight through to a Fox Match Series 2 size 16
·         Set up 3: Preston Fluoro 16 Elastic – 0.15 – 5.14lb Reflo – straight through to a Drennan Wide Gape Specialist size 14 – Hair Rig – I had a paste rig ready to use, and would swap rigs over on this top kit on an adhoc basis.
My intention was to feed the left margin occasionally and see if I could mug a few cruising carp (as this wasn’t a peg, I didn’t think the fish would by shy about coming close in).  Then fish to the lilies on 2+2 using dead maggot, corn and pellets and switch to the far side of the lily bed on 2+3 using paste. After re-wetting and balling in 2 tennis balls of groundbait it wasn’t long before the swim was fizzing away nicely (It is important to soak this groundbait for a while beforehand, if you don’t the ball will float until it absorbs enough water!). I shipped out on the 8 – 10 elastic, using double red to start (despite the instant liner I had on the drop), my float sailed away and I was into a small Roach. 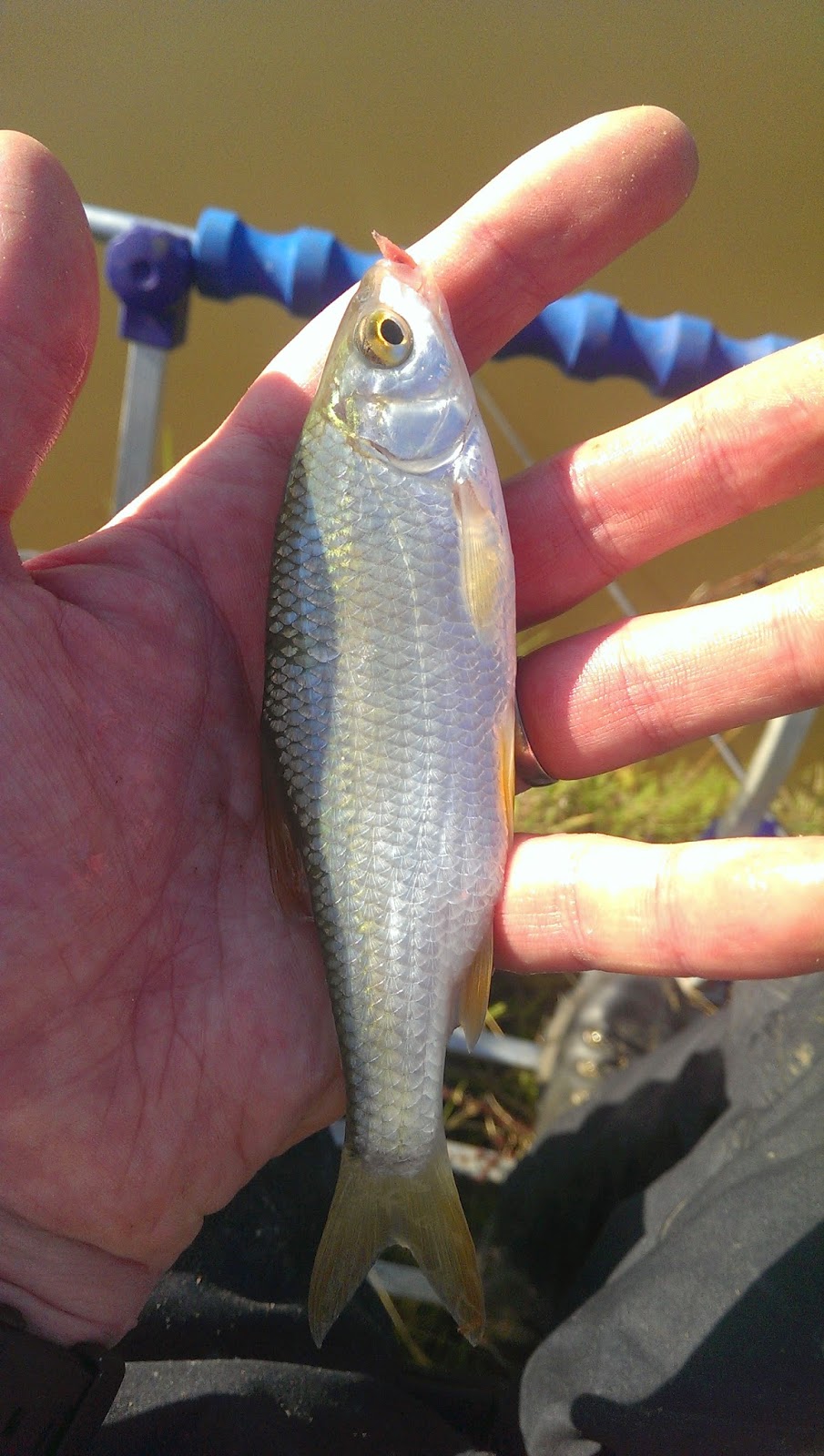 On the second attempt using red and white I was into a slightly better Roach, which had narrowly escaped a beaked death earlier in life. 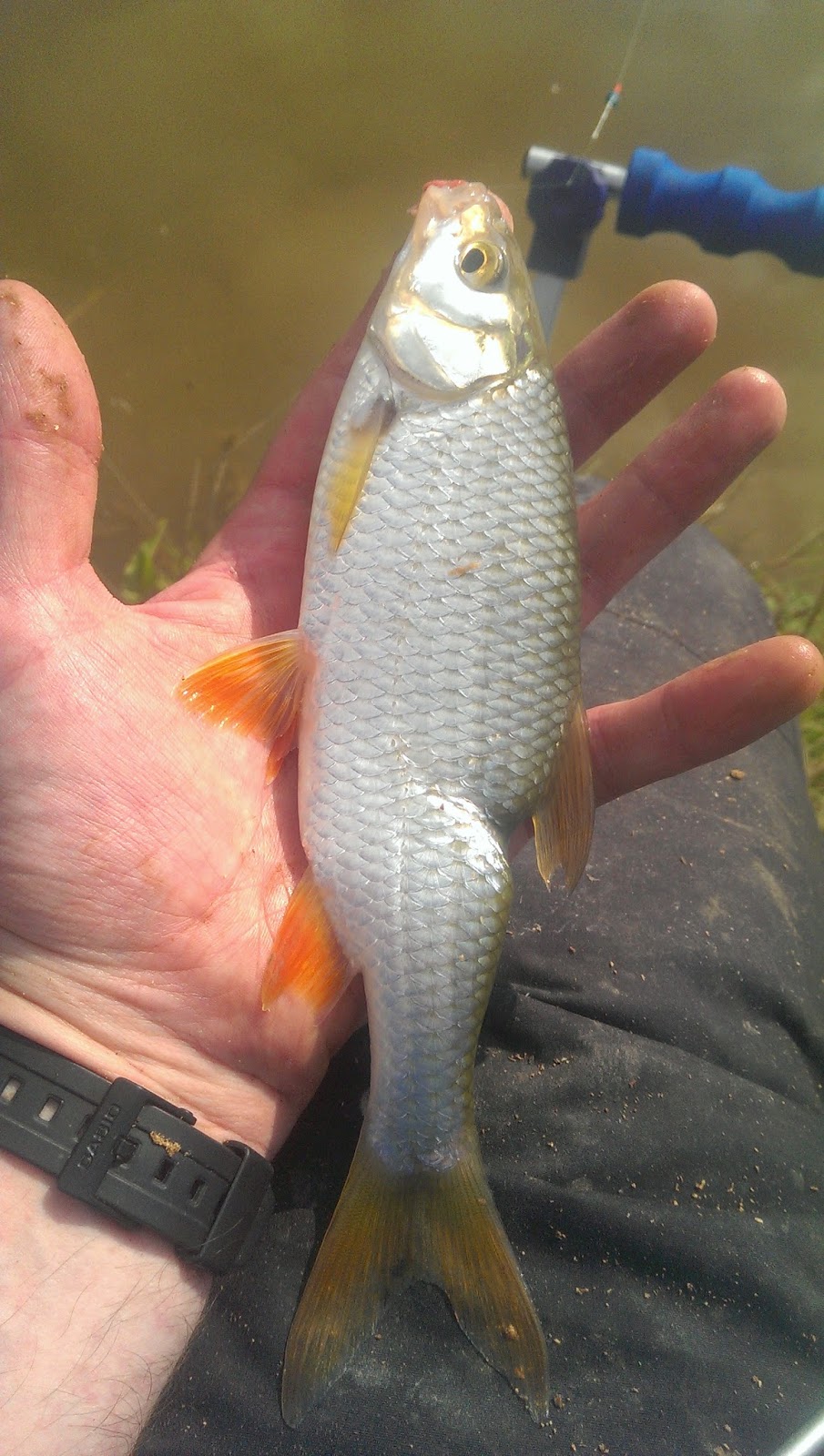 Switching up to double caster the bites took a few more seconds before they were gobbled up by something more sizable. Rather than diving back into the lilies it swam to the left, and I could feel something rubbing against the line. The fish tore off again and clumps of green plant floated to the surface. The fish has swam straight into a raft of submerged Canadian pond weed. I lost the fish (about 3lb’s), and knew from that point on if a couldn’t haul them out quickly, this was going to happen a lot! Still, I swapped over to the pellet rig and haired on a 8mm Halibut pellet. 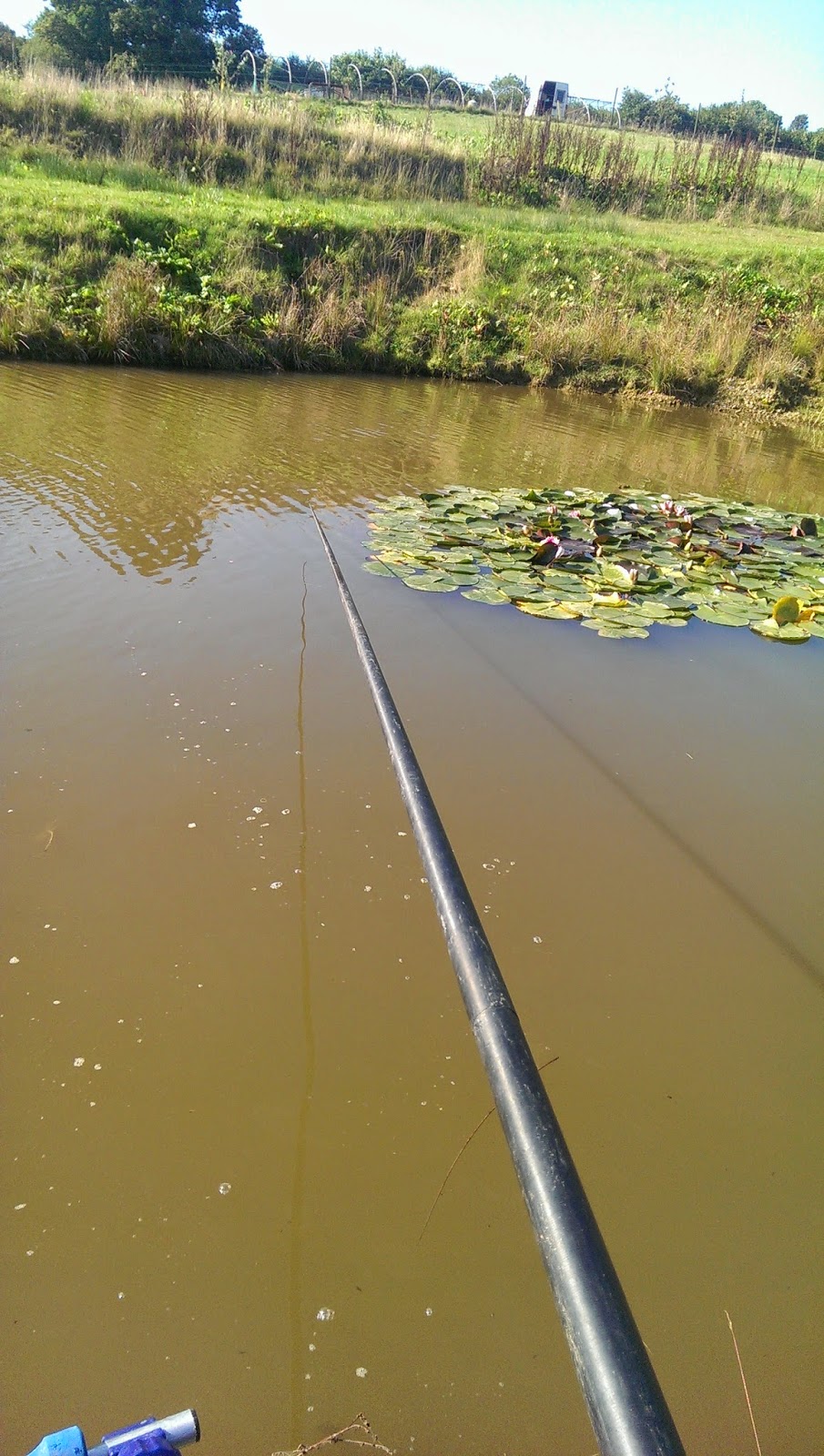 The moment I dropped the pellet in there was huge fizz of bubbles, the float bobbed and just disappeared under the surface. Striking the fish made a break for the same weed bed but before it could complete it’s break for freedom, it was being quickly ushered into the net. A nice common of a few pounds. I clipped on the largest of my Frenzee soft pots and began feeding a ping pong ball lump of groundbait every time I shipped out. It was clear from early on that these fish were “having it” and being the only person on the lake I couldn’t really over feed. 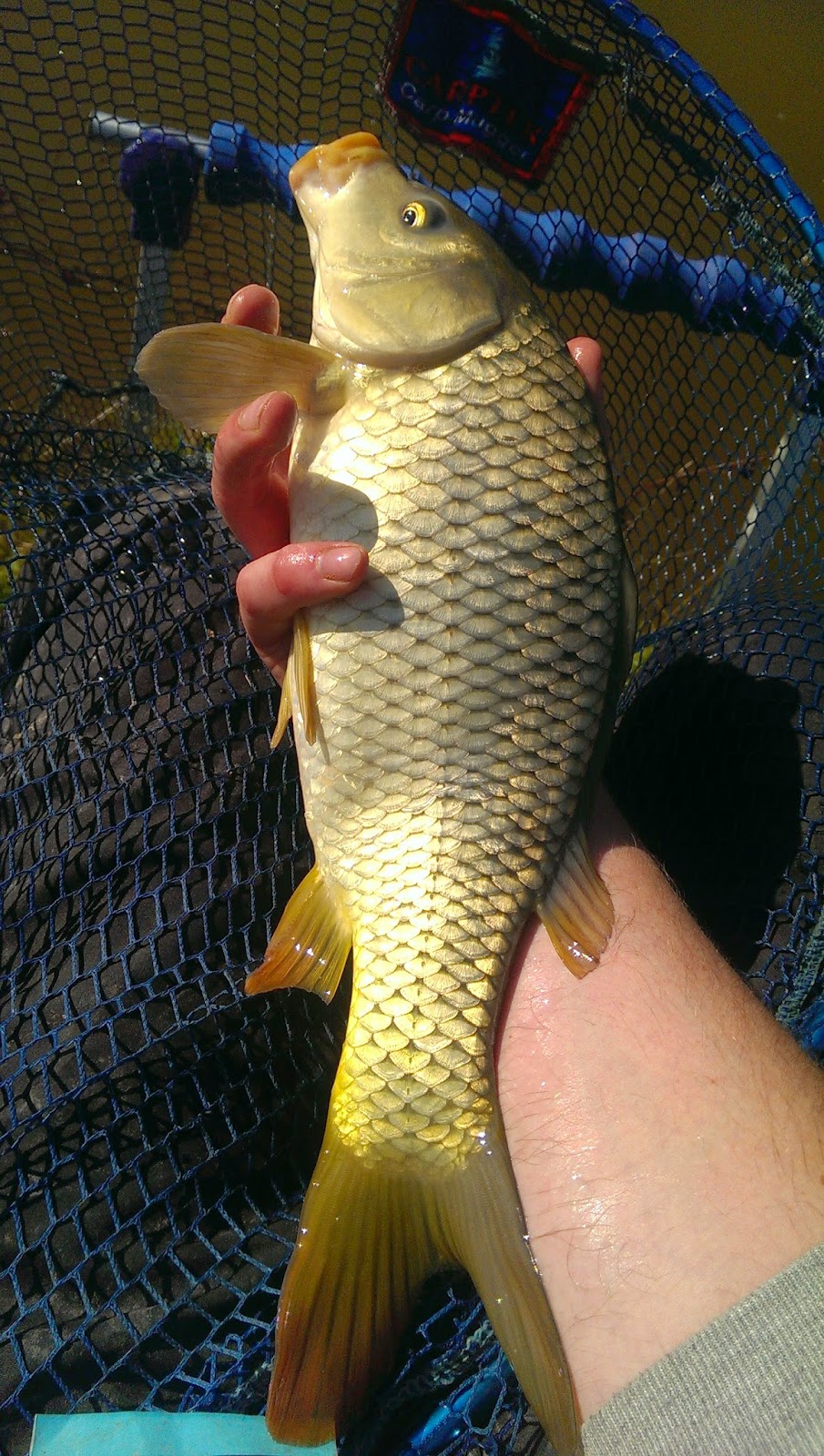 The peg seemed to be alive with bubbles, and after another 3 fish on the pellet, I pretty much forgot about my paste set up. The pond weed however was getting to be a nuisance. By the time I had 6 fish in the net, I had lost 5, with varying levels of damage on my rigs and an increasingly large clump of weed on the bank. It always pays to make your rigs in at least 2’s (3’s or 4’s are even better), the 6th fish had somehow snapped my hair, so I quickly swapped it out to a 2nd version I had made the previous day. Only when cutting the old rig down did I notice the eye bayonet had ripped through the balsa wood body. 1 float down the drain! Shipping the new rig out I had to wait a bit longer before bringing the greediest Carplet to the bank. The pellet didn’t even fit in its mouth! 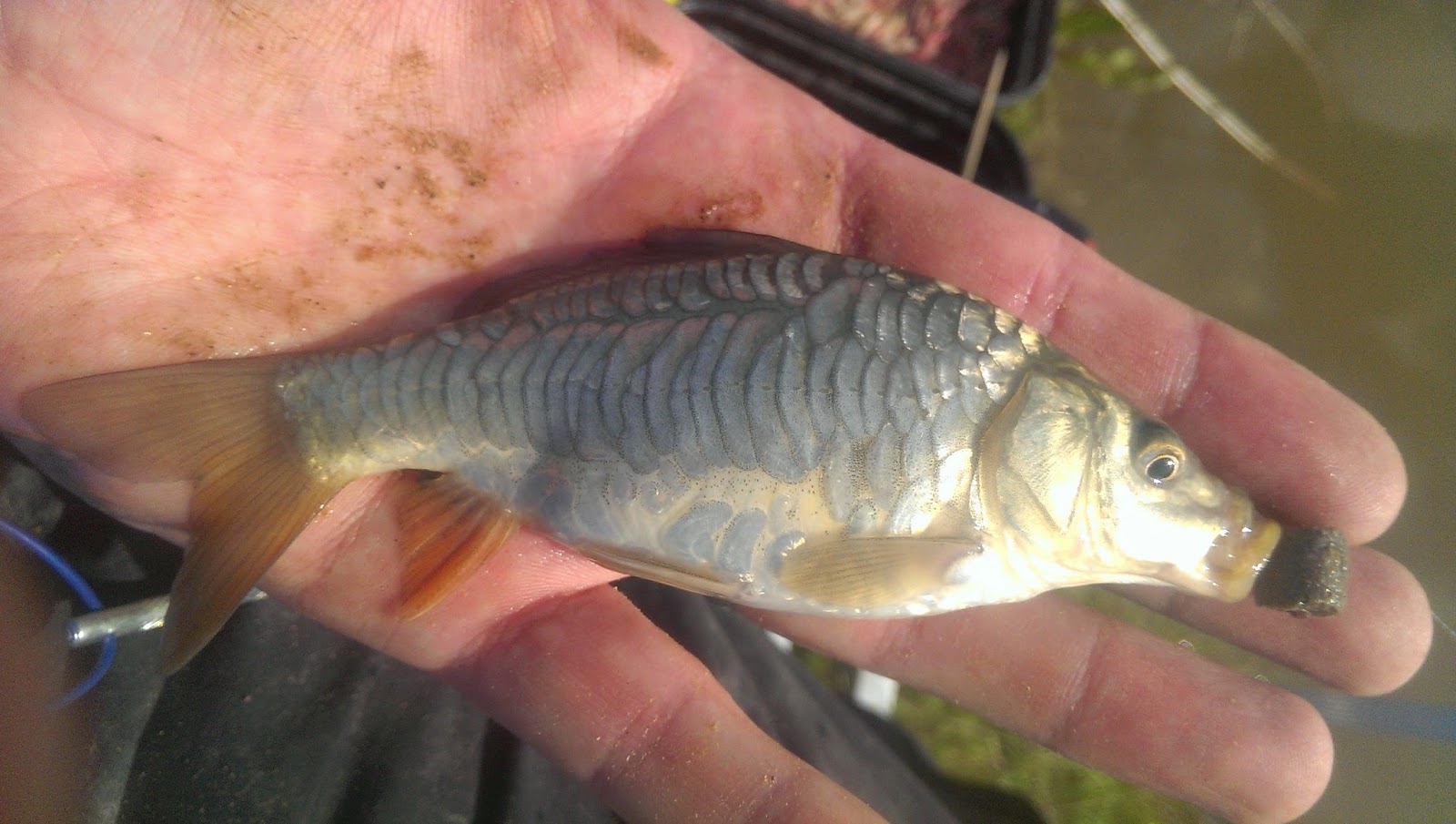 The next fish tore off and straight through the pond weed, despite my best efforts shaking the hook in the process. This meant the rig (being pulled by the elastic) went through the pond weed snapping the fibre bristle! Another float down the pan – Note to self, don’t buy Maver floats! I did have a quiet spell of around an hour, despite the constant stream of bubbles in my swim where I struggled to connect with anything other than weed. The pile was growing all the time and when the fish finally came back on the feed I often caught weeds with the fish. The day was ticking on, and my 65%+ catch rate (13 fish banked, 7 fish lost, biggest banked was around 7lbs, and 3 more smashed rigs) was really frustrating. 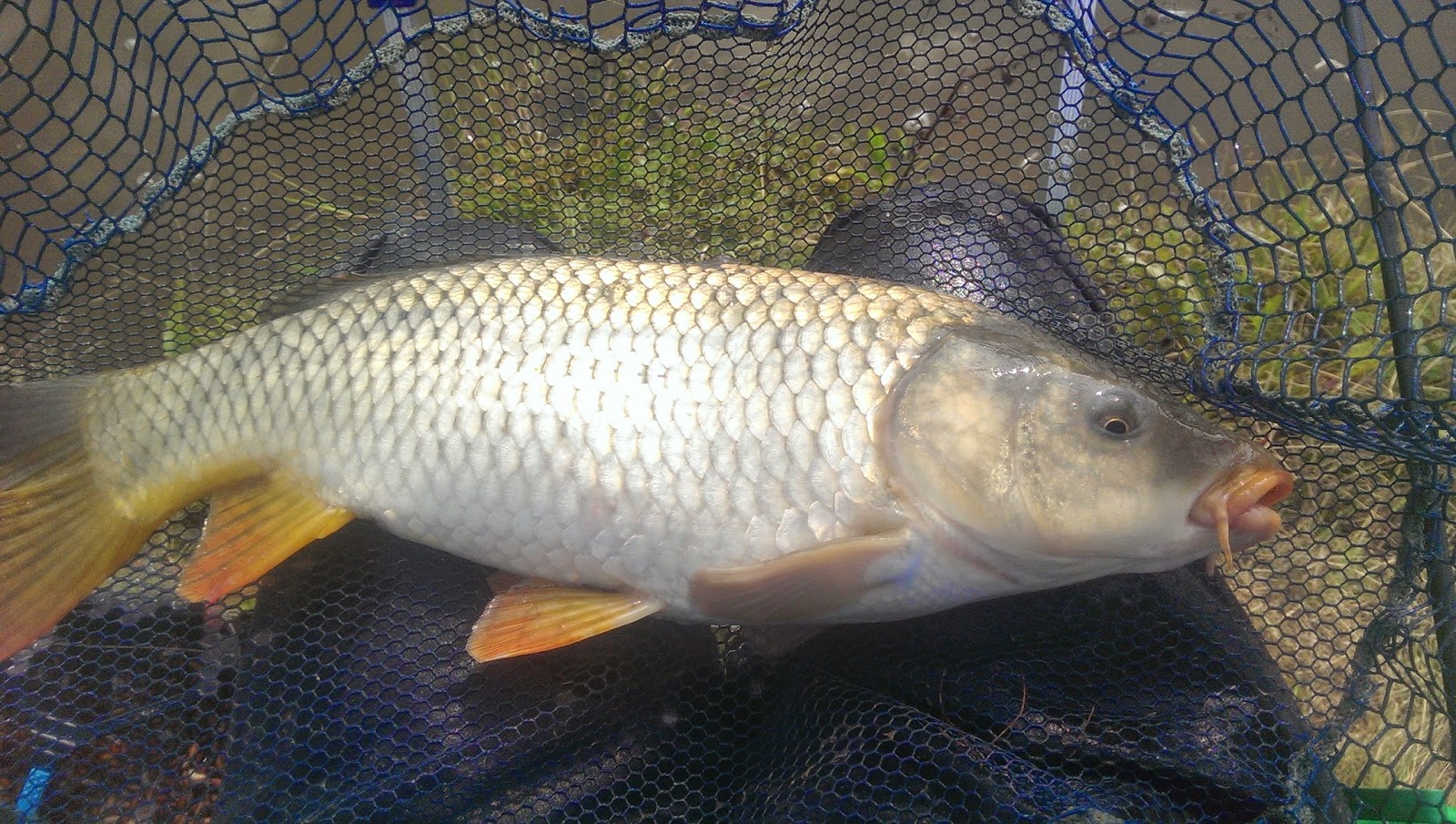 Wanting to focus more of fishing pellets I threw the majority of my dead maggots and caster into the left hand margin. 10 minutes later and there were huge swirls of churning fish directly underneath my feet! I couldn’t resist and hooking single grain corn I lowered the rig into the 12 inch deep margin, right onto the nose of a lovely Roach. 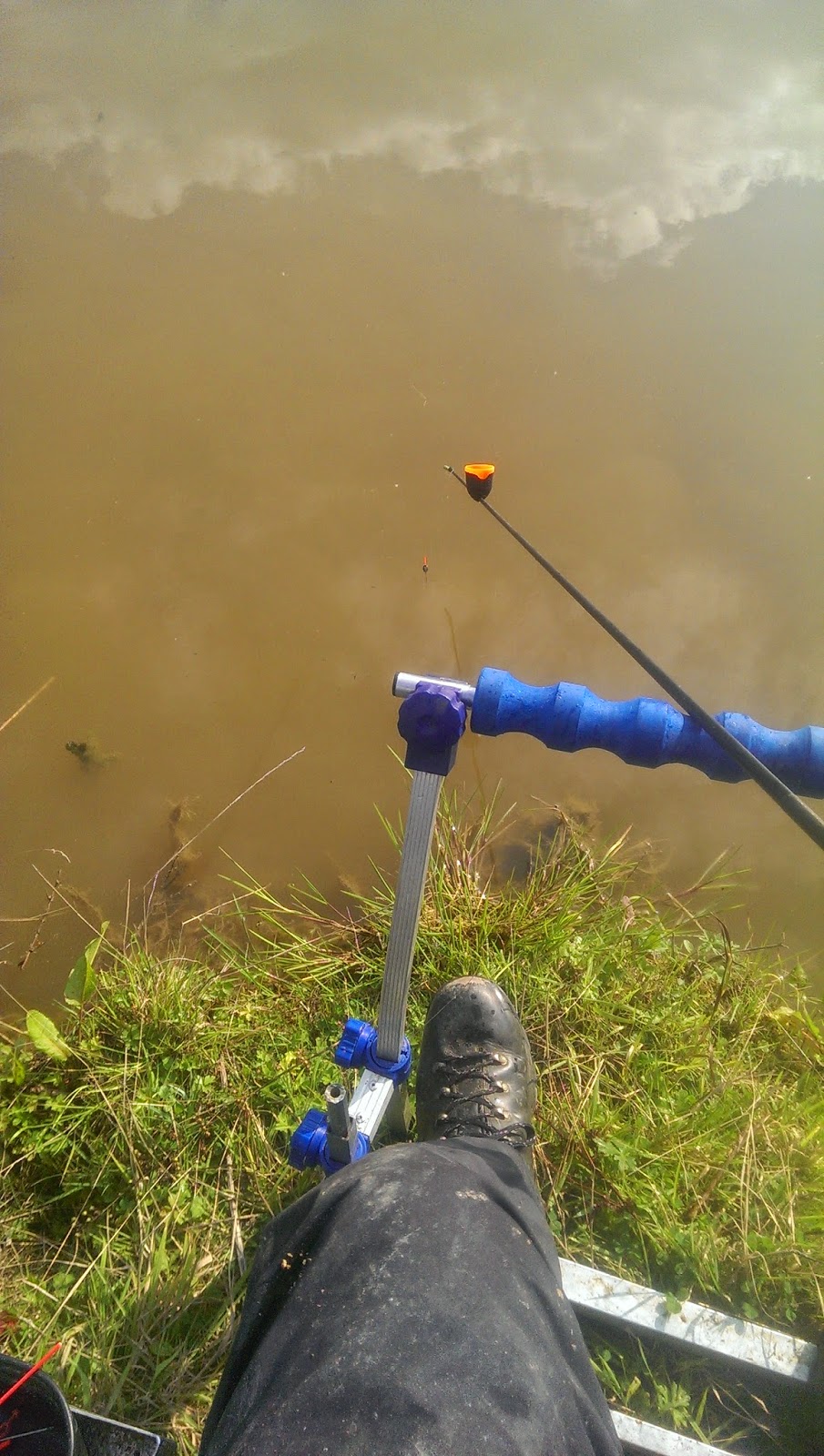 Biggest of the day, this was followed by 2 others, before a Carp charged off and took the hook with it! I was starting to have a nightmare with broken rigs, switching down to the 14 elastic I lowered in the new rig and waited. It was easy to spot the feeding fish as there were clouds of silt everywhere, I lowered another piece of corn on to the nearest swirl and 2 minutes later I was into a lovely mirror carp. The condition of these fish is immaculate, many of which look like they have never been caught. 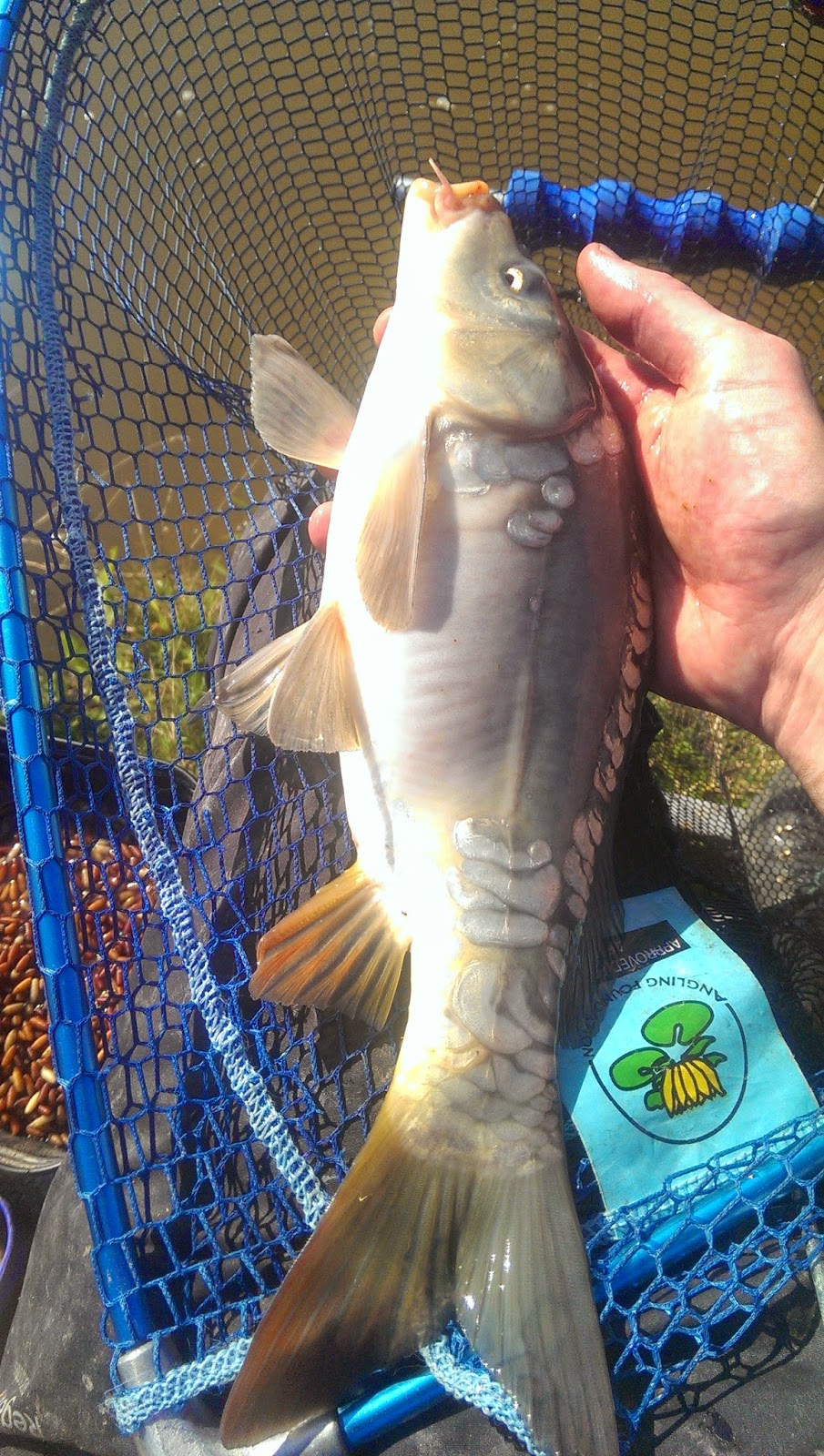 I caught another common carp around the same size on 6 dead maggots (I kept a tiny handful back) and after a few more roach and another greedy Carplet I decided to call it a day. Just as I was about to pack up my lightest top 2 I saw a carp feasting away 12 inches from the bank. Hooking the only grain of corn left on my bait tray I dropped in my roach rig, instantly the bait was snaffled up! Then I remembered how stretchy this elastic was. It was the best fight I had had all day and on such light gear at one point I was stood on my foot plate, top sections lifted vertically above my head and the carp was still charging around near my feet. Middy Hi-Viz really does stretch! I finally got the fish in the net and with no bait left I finished packing up what had been an incredibly eventful day. I left knowing I had a lot of rig making to do.
I finished on 16 Carp, (managed another from the lily’s) and a small bag of silver fish. I knew there was a good head of silver fish in the lake, but I stuck it out on pellets, hoping that the Tench would come on the feed, unfortunately I didn’t see one. I was also surprised not to see another angler all day! Potwell Lake is a great fishery, it is a shame that the pegging structure seems incomplete because you could easily get another 4 – 5 pegs on the lake if the access was better. The defined pegs however are well spaced and flat, and as previously mentioned, there is a solid pathway to access them all (on the right hand side of the lake), which would even be achievable by wheelchair with assistance. The cost of £6 was also reasonable given the number of fish I had, but I did leave feeling quite annoyed about the amount of tackle that had been ruined by the pond weed. The owner also seemed aware of it, but perhaps not as bad as it actually is. Next time I fish there I’ll take rake and chain and clear my peg beforehand. There is also a loo on site which meant you don’t have to find an appropriately sized bush! I will definitely be returning to this lake especially as it holds a few Tench and this year I’ve had a bit of a Tench drought, but as the cooler weather moves in, maybe I’ve missed this year’s Tinca’s…
As a rating I would say:
Fishability – *** 1/2 – Don’t let first impressions put you off. I arrived and thought it looked like a newly dug bowl, but there are a few features, and the carp come in very close so fish tight to the margins.
Accessability – *** 1/2 – If you fish from a peg off the path you will have great access and plenty of room, if you want to fish the peg with the most features you’ll need to be prepared to scale down a rather ropey looking banking and make sure your gear has mudfeet, as the legs on my seatbox required some persuading to come loose.
Value for money – **** £6 (and you can use up to 3 rods)- I was kept very busy using 1, but would certainly consider using the feeder. Bargain.
Disabled Access. – *** – You can park quite close to the lake in the car park and then with assistance a wheel chair could make it round to the gravelled pegs, but fishing anywhere other than the “defined” pegs would prove very difficult.
Share