It’s been a good few weeks since I’ve been able to get out and wet a line, and with several trips to and from Wales over the last fortnight I was faced with the prospect of a double header fishing wise. Obviously, when this chance started to come to fruition I jumped at it. My brother is a very keen sea angler and frequently ends up going out and catching Codling, Ray, Smoothound, Whiting… All sorts really. So when he asked if I fancied a few hours out on Saturday afternoon, (and without being remotely competitive) I picked out a few dusty beachcasters and a tripod, jumped in the car and away we went. 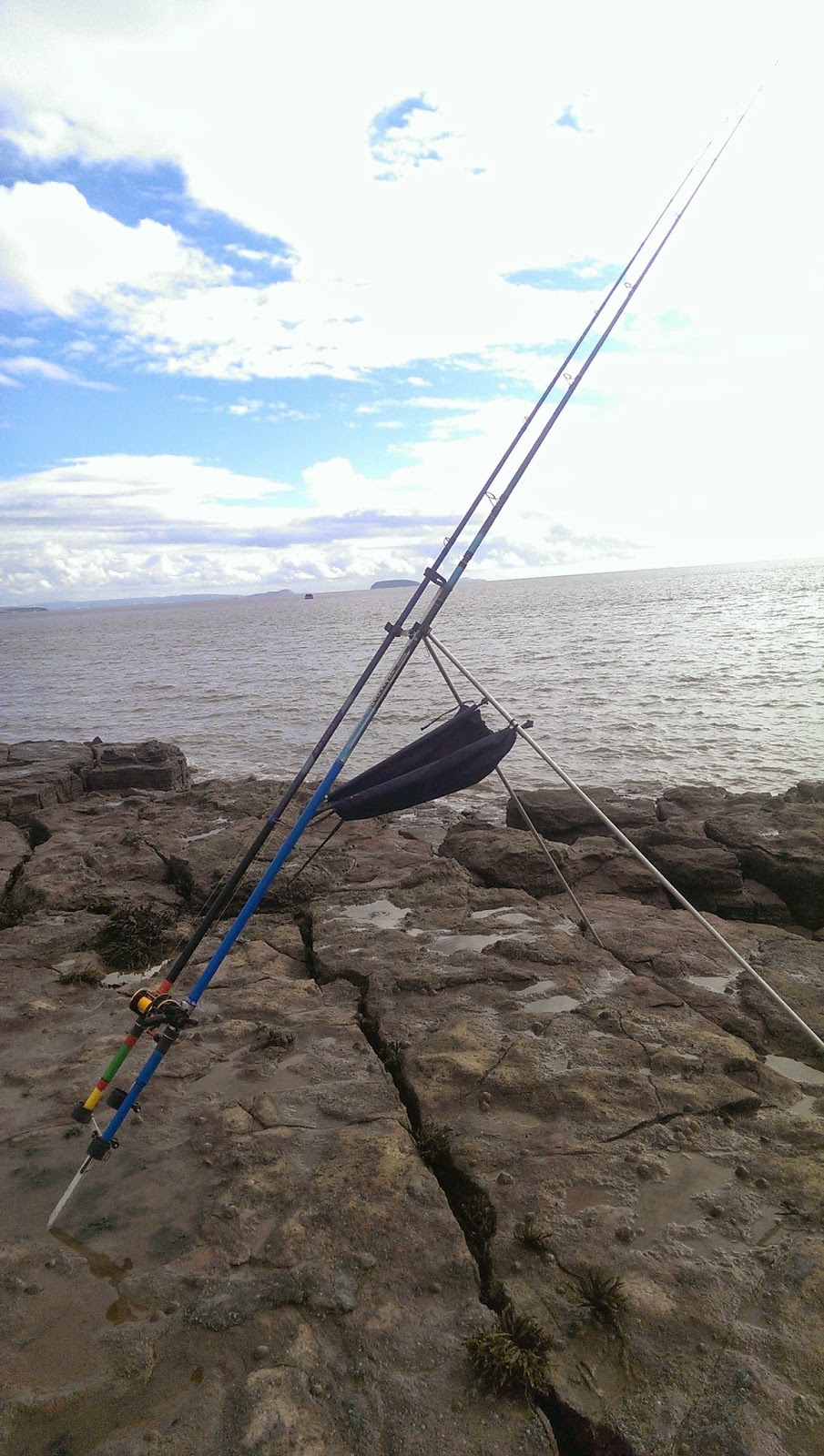 The rod and reels I used were;
1.       12’ 9’’ – Daiwa Amorphous Whisker (Blue) Beachcaster – Reel down
2.       12’ 6’’ – Shimano Super Ultegra Beach (Soft Tip) Beachcaster – Reel down
Both coupled with Daiwa SL20SH multiplier reels, using 18lb mainline and a 60lb shockleader. A bit of step up from 6lb Reflo…
The tides were fairly substantial (12.5m) and rather than fishing anywhere rough we elected to fish Bendrick’s Rock Beach. It was a reasonably easy walk through a small amount of scrub land, down a concrete slipway and onto huge rock ledges – a suitable choice for those with unstable footing. We’d be fishing the venue 2 hours down and 2 hours up as low tide was around 3pm. Setting up sea fishing equipment is so much easier than coarse fishing, and within minutes I had put rod and reel together, and was making the final adjustments to my rigs before casting out. No faffing with seat boxes, footplates and box attachments, just quick and simple attach it all together – bait up and cast out! Casting however may prove difficult. I haven’t cast a multiplier reel for a long while, let alone fished “reel down”, so was unsurprised when my second cast (given with a bit of gusto after the success of my first) resulted in a “bird’s nest”. Fantastic… After the 2 of us picked away at it for 5 minutes it finally came loose, and after that initial hiccup I continued to fish without issue! Phew!
My bait of choice was Ragworm, Lugworm and Squid. But as is the way with sea fishing in this part of South Wales, if we hadn’t had a bite within 10 minutes we’d need to wind in and re-bait as the crabs will have picked our hooks clean! Within minutes of my first cast the rod registered a bite. But in my excitement (and phone usage) I missed the second one!
I had a quiet spell for 15 or so minutes (on both rods), when after re-casting a newly baited rig the rod registered a solid knock. I followed the mantra of my Grandfather “let it hook itself” and started looking around the ledges. My brother had suggested there may be some crabs around (which would make a great alternative bait) so we were both looking under the rocks in various pools. It’s getting on in the year and with the drop in temperature I think the crabs have confined themselves to deeper water off the beach. Still there were plenty of limpets around, so I knocked a few of them off the rocks and elasticated 3 of them on a Pennell hook pulley rig. Casting this rig out I had a solid bite after 5 minutes, and after giving it another few minutes I could see that something was hooked. I wound in a small “strap” conger eel – I was off the mark, while Mathew was yet to start! I gave him a couple of 1-0 shouts before I unhooked the fish and sent it back out to sea.
“You caught that on limpets! I’m never buying bait again!” Mathew called. I think a few people had the same idea because during the afternoon several people turned up and started knocking the limpets off the rocks and began depositing them into bags. Maybe they make good eating? I’ve never been one for limpets or mussels.
If I’m honest, as the afternoon wore on the weather was starting to become a nuisance and when the tide really started to ebb the wind picked up forcing the clouds (and rain), which left us chasing the water down the beach with our hoods up squinting through the drizzle. Still, we were out of the house and trying to catch some fish! The gradient of the beach after the ledges is quite shallow so at low tide we were a fair way off the water without venturing into the mud flats. Mathew stepped out 18 inches too far and ended up in mud above the ankle. Unlucky! The beach has been known to throw up some big Conger eels at low tide. So with the tide about to turn, we both baited up with whole squid and cast out hoping for a bit of lump. We also really tied our baits down with baiting elastic in the hope that it would perturb the crabs a little bit longer. After 20 minutes and with the tide starting to slowly push back up the beach we wound in and found all hooks were bare… Those crabs were really doing a number on us! We both decided to wait for lumps in the last hour and kept alternating between big baits of whole squid, or loads of ragworm and lugworm all elasticated together. 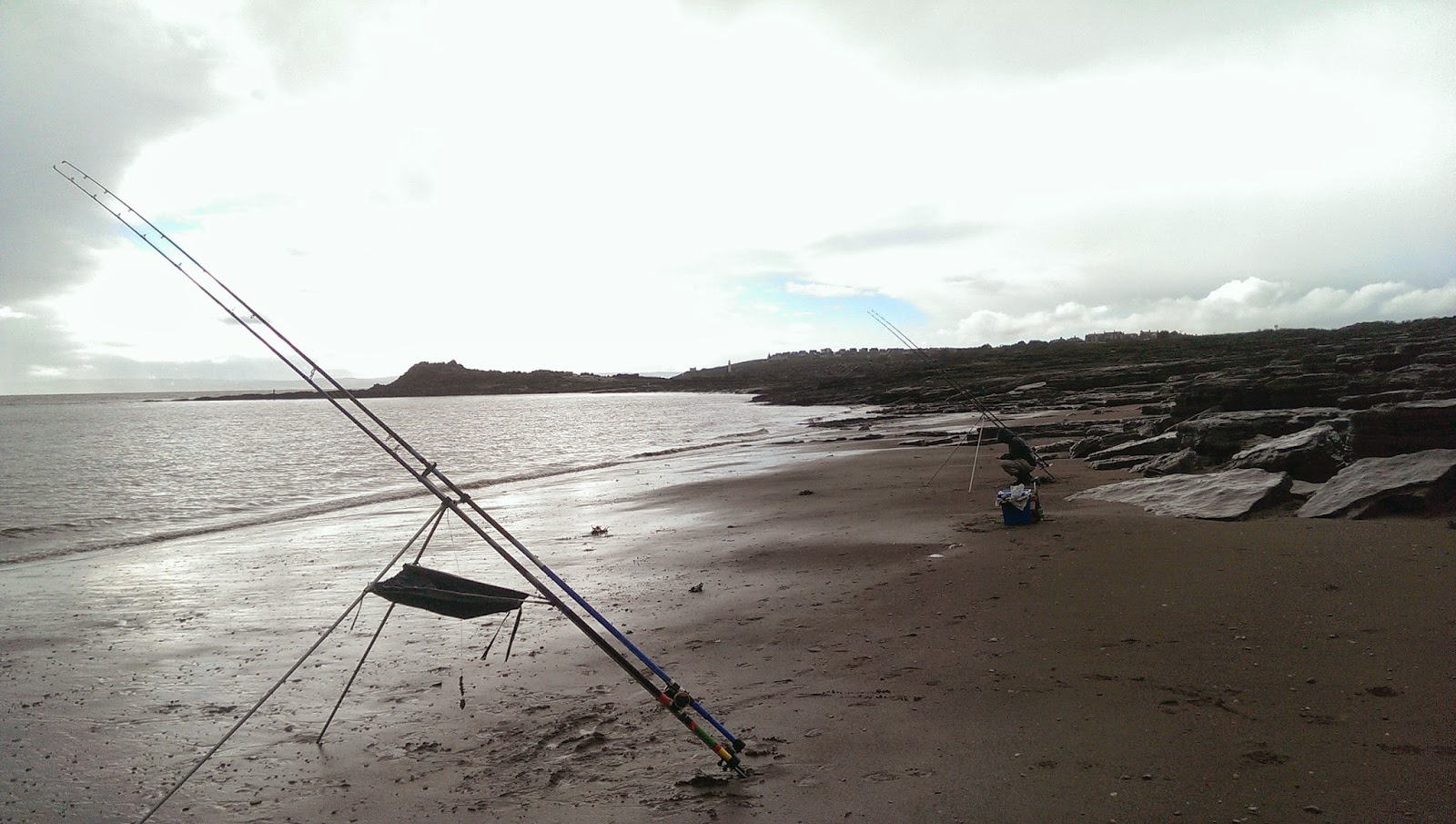 Sadly, despite one very timid bite (which could have been weed), neither of us connected with anything else. My brother had fished very near this venue on the previous night and caught numerous Codling and Whiting, and said normally the beach produces a lot more. I wasn’t that bothered, as it was nice to be out wetting a line. But the overnight rain, drop in temperature and cold north / north easterly wind wasn’t doing us any favours. We called it a day a little bit earlier than expected and I managed to rib Mathew on the way back to the car about ending the session the firm victor with a 1 – 0 score line.
I think Mathew left feeling quite disappointed but the venue itself was nice enough. It has good access and as we were fishing onto mud and sand no tackle was lost. It would make a great venue for novice sea anglers (as well as those more experienced) as there is plenty of space and a few options in terms of casting location. You could even venture over to the main Bendricks Rock and spin for bass in the summer or fish big baits for monster Congers if you’re feeling brave! It was a great afternoon and I was happy spending some time with my brother.
As a rating I would say:
Accessability – *** 1/2 – There’s a slight mud banking which may cause difficulty without help if you are unsteady. Otherwise, easy peasy!
Fishability – *** – Like a lot of the beaches around, there they all produce well under the right conditions.
Value for Money –  ***** – Free
Disabled Access – * – You couldn’t access it by wheelchair; the small slope down to the beach would also prove difficult to anyone without sure footing and assistance.
Share