I don’t know why I thought most fish could be landed on 4 ½lb line, however this was going to be put to the test today. I arrived at Toms Pond to a steady wind of about 15m.p.h and intermittent drizzle. Aside from the weather it was a very nice looking duo of lakes. After a quick walk around it was obvious that today was going to be a tough days fishing. 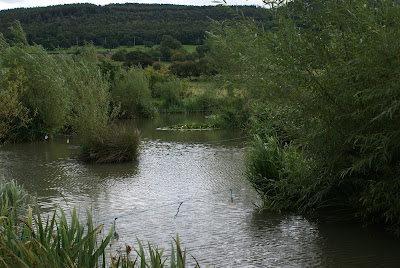 The layout of the lakes was such that any pegs which offered cover were taken and the ones which were available left the prospective angler exposed to the elements! After speaking to the lady who I paid to fish I learnt that the first lake was mainly filled with carp and some barbel, whereas the back lake has a head of silver fish with fewer specimens. From my walk around the lakes I choose the back lake as it had 1 peg which offered some respite from the weather and I quite enjoy bagging up on silver fish… 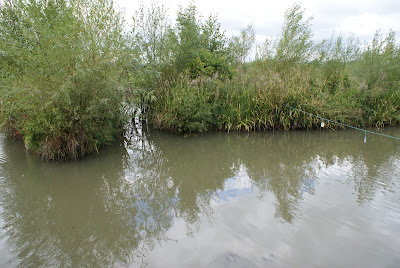 After setting up at peg 7 I began plumbing up at about 9.5 meters around the island opposite but, there seemed to be a few inconsistencies with the depth (although the lake did seem to be shallow). Within a 2ft square I found that I could be under depth, over depth and exact depth! So in the end I guessed at around 2 ½ ft which seemed to do the trick. I shipped out with trusty double red maggots to start. I loose fed some maggots over the top, and it wasn’t long before the float ducked below the water. It was a timid bite and I pulled out of it too quickly missing the fish. After quickly re-baiting and shipping back out, this time when the float disappeared I struck into it gently. It was a roach, I unhooked and returned the fish, shipping back out again with double maggots. This time it was a Dace! 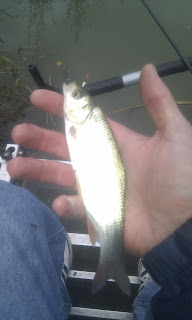 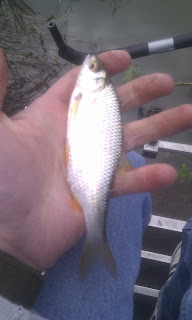 Switching to worm, the wait was slightly longer but when the float finally slipped under it looked like a small ide. The bites seemed very timid, and although I was getting plenty of bites I didn’t seem to be catching enough fish. With that in mind I switched from a size 16 Kamasan B611 to an 18. The effect was immediate, connecting with fish after fish! This continued for 2 hours or so, solidly catching silver fish from 5 – 8oz and I would estimate I had caught a bag of fish between 15 – 20lbs. 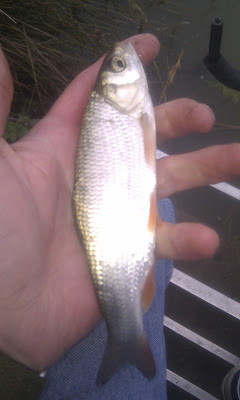 The weather was slowly taking a turn for the worst and I still hadn’t hooked any of the bigger fish which I knew the lake held. I switched to my heavier top kit and pulled my float to the same depth as my other rig. Placing some meat on the hook I shipped out with an extra section taking me to around 11.5 meters. The rain was starting to fall and the wind was picking up. Dropping the meat in about 1ft away from the gap between the islands, the waiting game had begun. 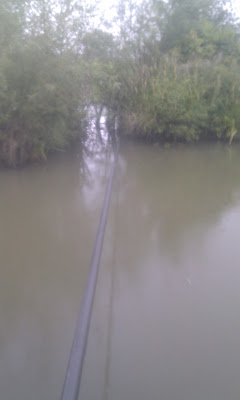 There were a few line bites and after 5 minutes of waiting the float started to bob uncertainly on the surface, 2 seconds later and the float vanished! Instantly my number 14 elastic ejected out of the tip section like a missile. It kept going; the strain running through the pole was incredible. This fish had made it through the gap between the islands pushing the rushes aside in the process. The elastic was beginning to bottom out and the pole was bent double. I put the pole under the water and added some side strain. Then I felt it, something gave and the fish was off. After shipping in and inspecting the rig the line had snapped just above the hook. After this I decided to call it a day, the rain was falling quite steadily and I was getting soaked through.


I really liked the fishery and had it been drier I would have stayed and fished on into the evening, but with the disappointment of losing that fish and being wringing wet I packed up and made my way back to the car.


I’m definitely going back to Toms and will try the first pond next time, which large bags of carp can and have been caught! Although the allure of the one that got away might tempt me to fish the back pond one more time.