I fished this venue back in June 2012 after a difficult and cold first attempt the previous winter. It was time for a rematch!

My last visit to this venue left me cold and frustrated by the lack of fish, so now that there was no possibility of it icing over I decided to pay the lake another visit with the hope of getting more than a few small roach. Arriving at the lake and given the time on a weekend (9:30am) I was surprised to find myself the lakes only occupant. Watching some fish moving on the surface I took my pick of the pegs and set up, with a feeling that this trip was going to be better than the last one!

Choosing one of the only pegs where it’s possible to fish the pole, I set up a light roach rig, with a heavier line plumbed to depth in-case I went after some of the Tench the lake is suppose to hold. Fishing just off the bottom on the lighter line I shipped out with double maggot and waited for the float to sail away. The thought of an initial bite, and being into a fish straight away came and went, and after 10 minutes of moving the bait around to try and coax a bite, I decided to change baits to see if that made a difference. It didn’t, but in the mean time I had noticed fish moving along the opposite bank. Seeing the fish feed spurred me on and I continued fishing quite deep hoping that the bigger fish would be nearer the bottom than the surface. 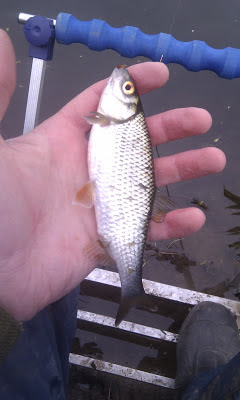 Eventually my patience was rewarded, but not with a specimen. A small roach of a few ounces was so far all I had to show for a busy mornings work! It was time for a change. Shipping in, I began to loose feed small pouches of maggots and casters to a distance of around 11 meters. If I could get fish feeding on the surface within pole distance I knew I’d start picking up more fish. Within a few minutes the fish began appearing gobbling down my free offerings. Although counter intuitive, I didn’t get the pole straight back out into the water, I carried on catapulting slightly less feed into the swim, this made the feeding fish compete more aggressively for the offerings. After 5 more minutes of feeding, the fish in the swim were now at fever pitch for caster. With that in mind I shortened down a light rig and shipped out, with single caster as an appetiser. The bait was in the water for seconds before it was devoured. Finally a better fish! 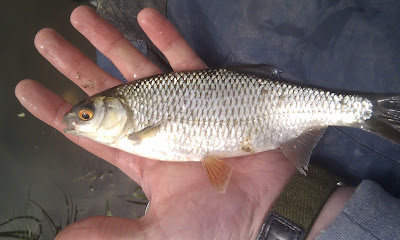 Bringing the fish to the net, I fired out another pouch full to keep the fish in my swim, returned the Roach and was back out this time with a double caster hook bait. I narrowly avoided the ducks that had swum over to investigate the commotion. After a few seconds my float to emerged, before it quickly disappeared back under the surface. Switching to fish shallow paid off and before long I had caught several pounds of good quality silver fish.
The fish continued to come steady to the bank, but the time between catching slowly started to increase as the fish seemed to be getting wise to my tactics and moved further out into the lake beyond pole length (that will teach me for not packing my extensions!). Time for a quick change of plan… I quickly set up the match rod with a self-cocking float and light hook length of around 18 inches and cast out to a distance of roughly 15 meters. I was glad to see the fish weren’t spooked by the splash of the float. Especially with a few maggots to encourage them to feed, it wasn’t long before a few more specimens found their way into my landing net! Another hour on the waggler and my maggot and caster supply looking almost nonexistent, I decided it was time to call it a day.
Although I didn’t catch (or see) any of the carp or tench that I’m assured the lake contains, I did have a very enjoyable time catching good quality silverfish which can sometimes get over looked. I think the revisit to Highbury Pond was definitely a worthwhile journey and is somewhere you should try out if you are in search of the wilier and better sized Roach and Rudd.
Share